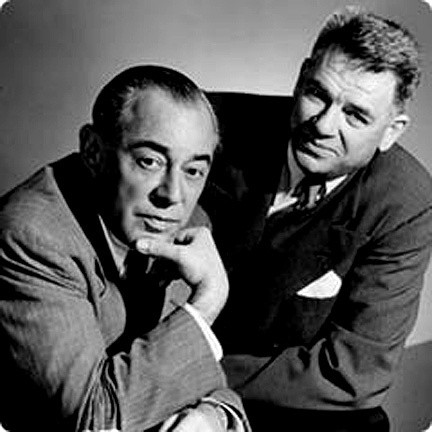 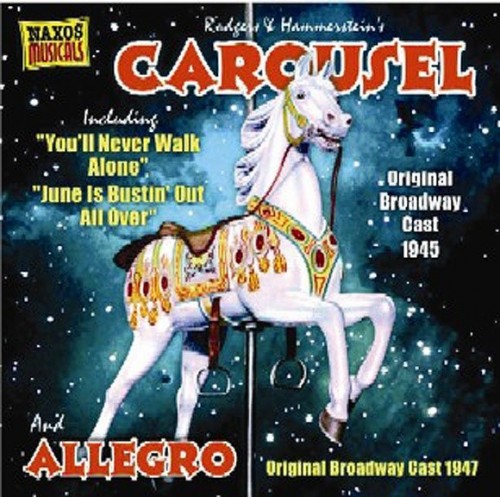 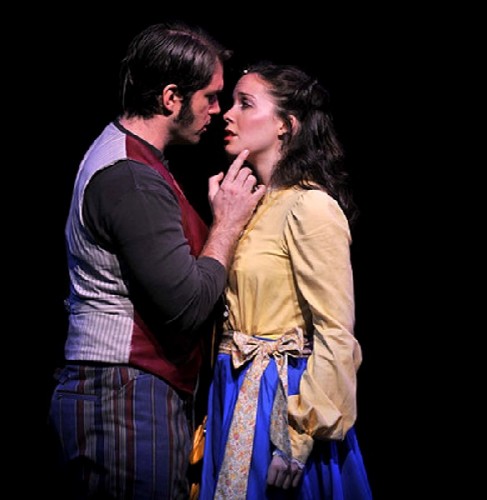 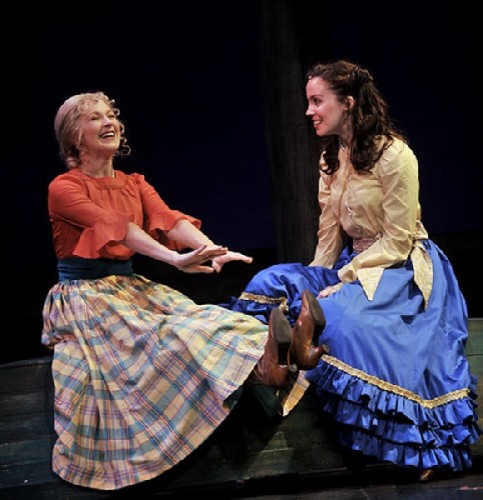 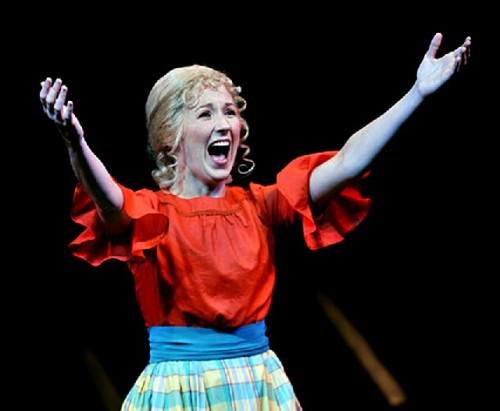 Pipperidge belting out a song. 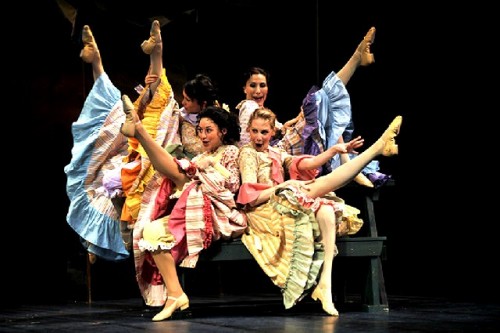 Kicking up their heels. 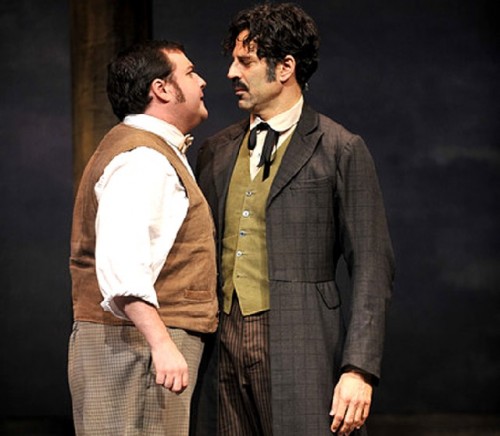 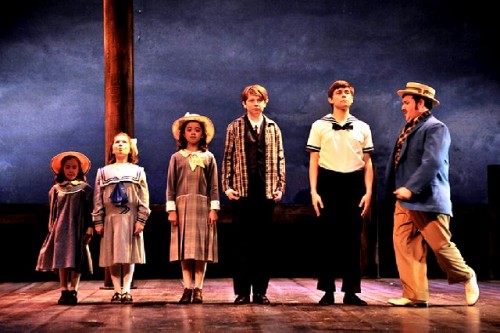 A proud papa and five of his nine little snowflakes. 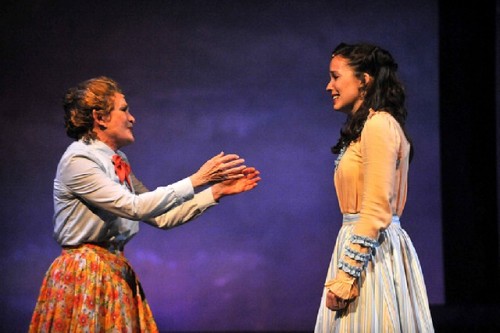 Nettie (Teri Ralston) was thrilling in a duet with Julie of "You’ll Never Walk Alone." 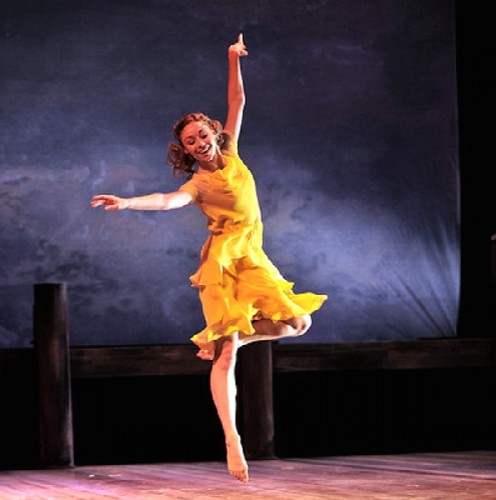 The love child, Louise (Kristen Paulicelli) is a free spirit. 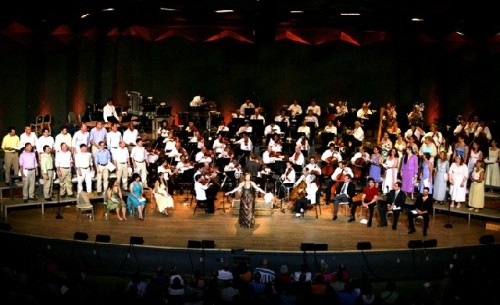 June is Bustin' Out All Over at Barrington Stage in Pittsfield with a triumphantly gorgeous and thoroughly endearing production of the 1945 Richard Rodgers and Oscar Hammerstein II production of the classic musical "Carousel."

In this troubled economy the artistic director, Julianne Boyd who just loves staging musicals, hopes that the sweetest sound will be the ring of the cash register. There is no greater escape from day to day reality than a spin on the dream machine of one of the greatest all time musicals. Yes, it is a bit dark. The protagonist, the Carnie worker, Billie Bigelow (Aaron Ramey) is a cad and beats the lovely Julie Jordan (Patricia Noonan). Faced with a long prison sentence Billy takes his life after a botched robbery and attempted murder. But even at the entrance of the Pearly Gates, actually the back entrance which is Mother of Pearl, he gets a chance to revisit Earth and make things right with the daughter Louise (Kristen Paulicelli) he never lived to see.

Yes, it is a bit of a stretch, but this story set in a fishing village in Maine during a visit by a touring carnival proves to be remarkably durable. And that divine music. My goodness. But in this otherwise flawless production with a fabulous cast, wonderful set by Roger Mark Morgan, bright and lovely costumes by Holly Cain, and the zesty choreography of Joshua Bergasse, it is the musical direction by Darren Cohen that proves to be problematic.

Surely as a budgetary consideration, Boyd, who directed this production, opted for an arrangement with two pianos. Not even adequate grand pianos but two uprights. The musical accompaniment was, truth be told, thin at best. This made the production seem more like cabaret than musical theatre. The cast wore microphones which, at times, overwhelmed the pianos. There was less the sense of live music than the intermediary of amplification. The balance of which depended largely on where you were seated in the audience. From our seats in the center of the audience the sound meshed adequately.

Perhaps we are being overly critical but, after all, this is a musical and hence not a minor consideration. We came to hear that magnificent score by Richard Rodgers. In an arguably unfair comparison, in 2007, we experienced a staged version of  "Carousel" conducted by Keith Lockhart at Tanglewood. Yeah, I know, apples and oranges. But we caught a glimpse of what might have been at Barrington when there was a fiddle on stage during 'Blow High  Blow Low" and "Hornpipe." Even this single additional instrument made an enormous difference. The piano accompaniment was most stark and problematic at the beginning and end of the production during dance sequences with no singing. One felt like sitting through a silent movie. But the audience cheered enthusiastically during the opening sequence that entailed a brilliantly simulated carousel. The actors circled while "riding" wonderfully carved horses.

The singing, by the entire cast, individually as well as in chorus, was just magnificent. Boyd has succeeded  in casting truly gifted performers with that rarest of combinations, great voices, as well as compelling acting. The leads, Noonan and Ramey, were stunningly evocative and suitably romantic. They were perfectly matched lovers. And many of the supporting roles were scene stealers. Julie's best friend Sara Jean Ford (Carrie Pipperidge) engaged to the straight laced Mr. Enoch. Snow (Todd Buonopane) was just top notch. Mr. Snow held his own as a silly but ambitious twit and good provider, as did the evil and smarmy crook, Jigger (Christopher Innvar). But Nettie Fowler (Teri Ralston) the kindly aunt of Julie who runs the lobster shack just blew my socks off with her rendering of the rousing "June is Bustin' Out All Over." She later sent chills up my spine with that most compelling of all tear jerkers, in a duet with Julie, "You'll Never Walk Alone."

Overall, Boyd deftly paced and guided the production through those magnificent ballads, solos and duets, the sublime "If I Loved You" and Billy's "Soliloquy" as well  as the pull out all the stops rousing production numbers like "A Real Nice Clambake."

Ultimately "Carousel" is a morality play contrasting what happens when nice girls like Julie get mixed up with handsome bad guys like Billy. This is contrasted by the nice girl l Sara Jean who lands a nice catch with that prig and twit Enoch Snow. Julie bears a love child raised as a single mom after Billy takes his life. Compared to Julie's on and only Mrs. Snow produces a brood of nine little snowflakes. All marching off to Sunday school.

We are left to ponder who ended up with the better life? Julie who knew love and passion at a terrible cost? Or her best friend who did the right thing as a brood mare? Of course, Julie is more fascinating character, particularly in the context of its era. Rogers and Hammerstein fudge on whether or not Julie actually married Billy or just settled in as a common low wife. The notion of a single mother is more widely accepted today than it was in 1945. This is conveyed compellingly when the engaged Sara Jean is almost conquered by Jigger. They are interrupted by Mr. Snow in a scene of confrontation with the seducer. This evokes Enoch's expectations of a bride who will be as pure as, well the driven snow. Edmund Bagnell's poignant "Geraniums in the Winder" is one of many memorable moments in this production.

The play seems to end with the suicide of Billy followed by the duet of Julie and Aunt Nettie  "You'll Never Walk Alone." This implies that Nettie will employ Julie in the Lobster Shack and help to raise her daughter.  The following sequence of Billy before the Mother of Pearly Gates, and his opportunity for one last day on Earth, is perhaps too much of a stretch. But the device introduced us to the serenely lovely Kristen Paulicelli as Louise, Billy's daughter. She danced divinely and stood up well as the hellion, just like Billy, suffering abuse from the prim and proper snowflakes.

Out of frustration Billy slaps Louise, just as he had Julie, when she is freighted by the advances of a stranger. Later she is consoled by her mother. The slap, which made a loud noise, didn't hurt. There is a knowing gesture by Julie who also conveys that Billy's blows inflicted no pain as none was intended. Today that argument doesn't fly. There is less compassion for battered women who defend their abusers.

So that's a hard sell. It is just another reminder of why this production of "Carousel" is less that perfect. But it comes pretty darn close. For a wonderful evening of musical theatre don't miss this one.