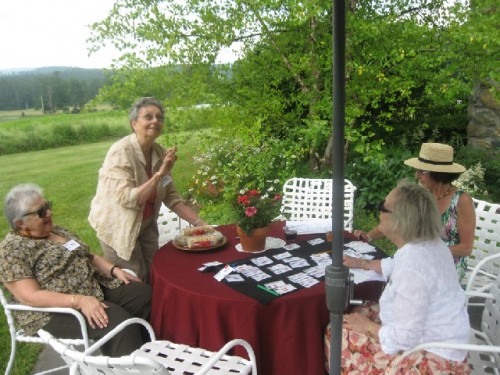 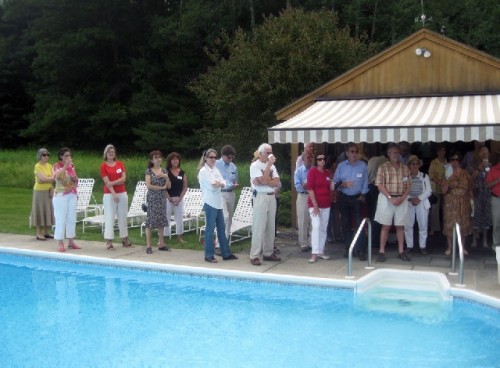 Gathering on the edge of the pool. 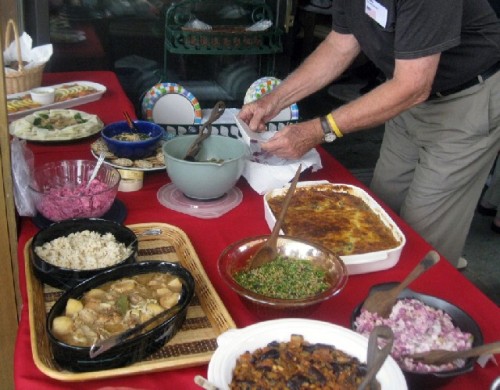 Sampling an array of traditional dishes. 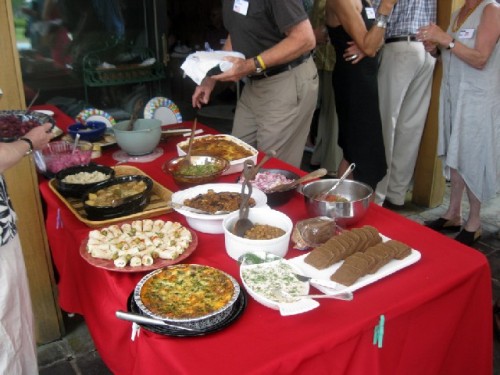 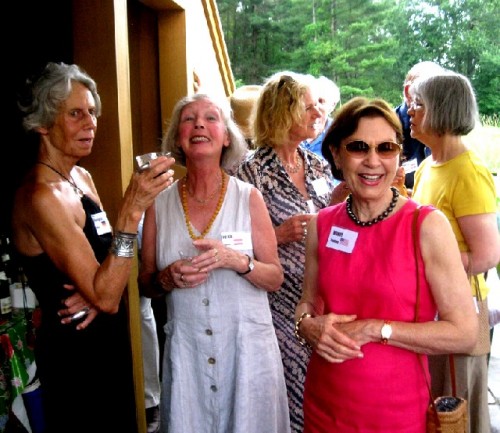 From the left the artists Benigna Chilla and Helga Orthofer, with Wendy Baptista. 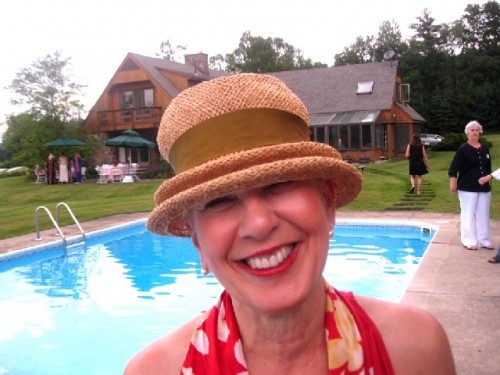 The perfect hat for a summer day. 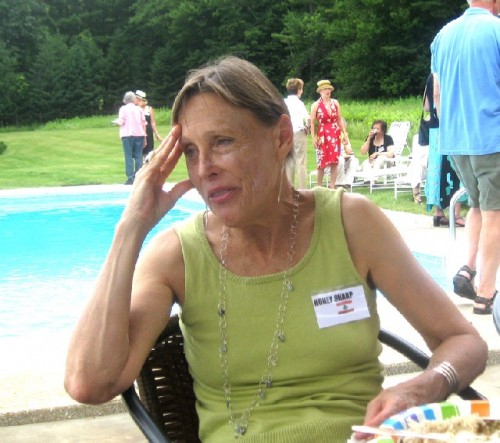 The private art dealer Honey Sharp in a reflective moment. 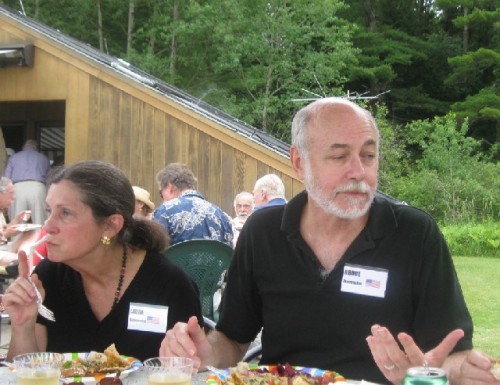 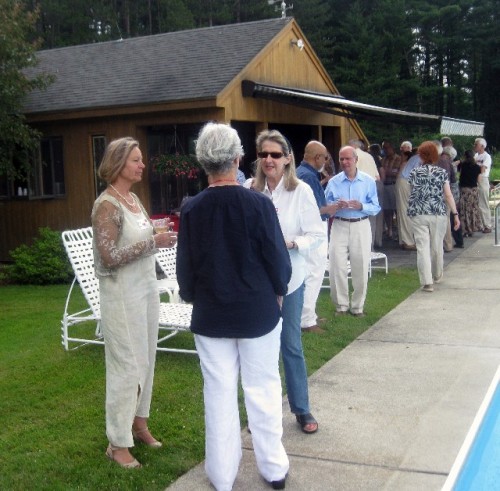 Conversations around the pool. 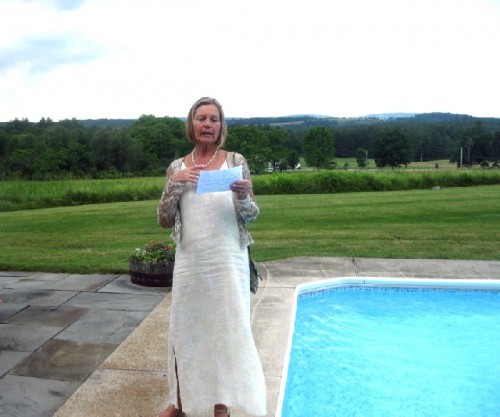 Club president Vera Lecoque addressed the gathering in front of a dramatic background. 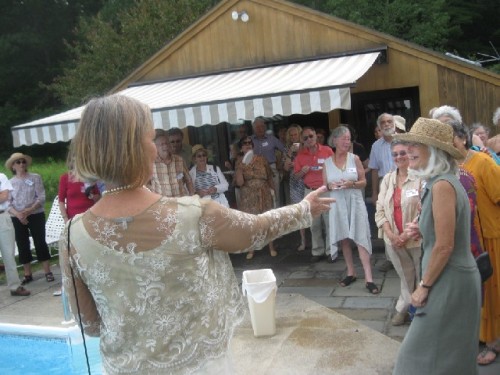 Speaking to the guests. 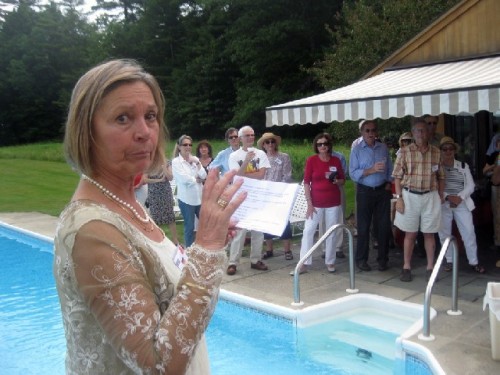 Ready for a closeup. 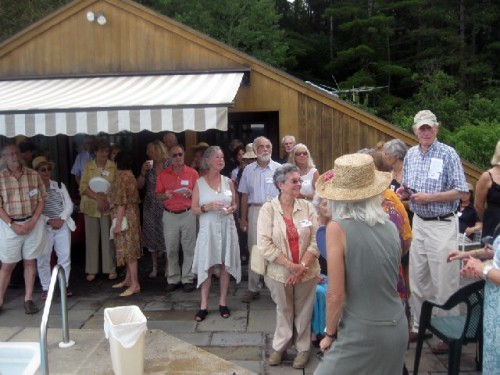 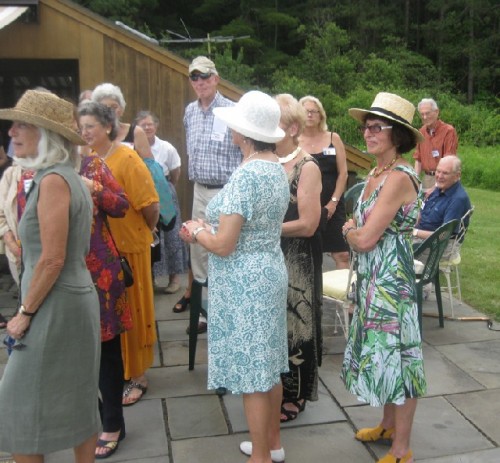 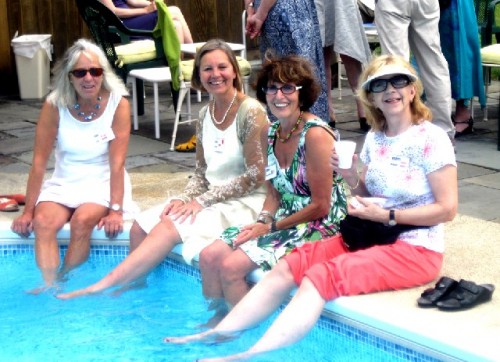 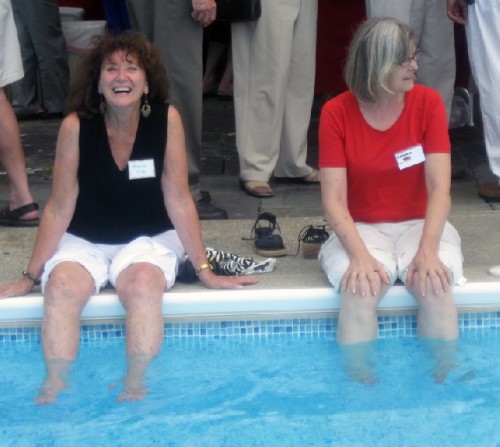 The delights of a summer day in the Berkshires.

The Berkshire International Club is a lively organization of individuals who were born abroad as well as Americans who have spent considerable time traveling and living in other countries.

During seasonal gatherings many languages are spoken. One of the inducements is to share conversations with other native speakers. This is a particular pleasure for my German born wife, Astrid Hiemer.

Drawn from the membership are gatherings with a narrower focus. We have been members of the German speaking group. On a couple of occasions we have hosted events. One in January was well attended even though it occurred in the dead of winter.

In a very German manner we sat around a table and shared a fabulous pot luck meal. The group included native speakers as well as less proficient spouses. I gamely tried to hold up my end of the discussion. It has been a great pleasure to know each other better. One of these German based gatherings was held at the home of the Austrian born Johanna Jenssen who hosted the Summer picnic around her back yard pool. There were some 70 members attending and sharing their international dishes. Yum.

It was a steamy and humid afternoon. There were dramatic clouds and threats of rain that never happened. Many looked longingly at the cool and inviting pool. Eventually several women sat around the edge and dangled their legs in the water. What a refreshing moment.

There were welcoming remarks and updates from the club president Vera Lecoque. She spoke with the dramatic vista as a backdrop.

Of the German group a couple of individuals are artists. We reported on the exhibition of Helga Orthofer that was held at Berkshire Community College in Pittsfield. That show was curated by the German artist Benigna Chilla who is on the BCC faculty. We have attended gatherings in her home and studio which is near the New York border. She has just returned from an exhibition and colloquium on art and mathematics in Latin America. Also she travels to India to visit her daughter. In September we will cover her exhibition in Connecticut. Her work is fabulous.

Through the club we have formed interesting relationships leading to creative projects. The Berkshire Eagle music critic, Andrew Pincus, has sent me advance chapters of the novel he is publishing this summer. We will have a dialogue about his creative work and critical views. I have also been corresponding with the photographer Jonas Dovydenas who has been embedded with troops in Afghanistan. He has been visiting for several years working on a book project. We will publish a selection of images when he returns. What he has shown me so far from the series has been riveting. Recently in a story Come Fly with Me I reported on Jonas taking me up for a spin in his two seater plane. He flew in to have lunch in Williamstown.

I hope you get the sense that these are truly fascinating Berkshire Neighbors.

A pleasure of these gatherings is to catch up on the travel tales of other members. We spent three weeks last September in the South of France. And have just returned from 33 days and 6,500 miles touring the USA. But when you discuss such adventures at the BIC you are always trumped. The South African lady seated next to me has just purchased a round the world airline ticket.

Then our friends Ling and Len Poliandro ( he is a sculptor in metal and glass) who own an RV commented that the first year they drove some 20,000 miles. They were seeking out every Frank Lloyd Wright building in America. My goodness.