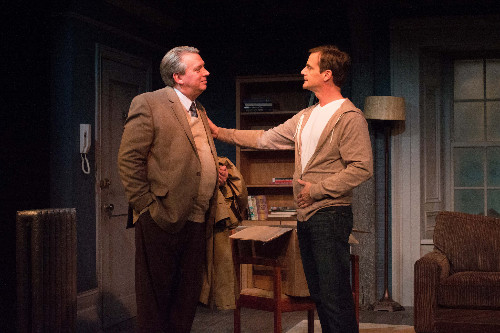 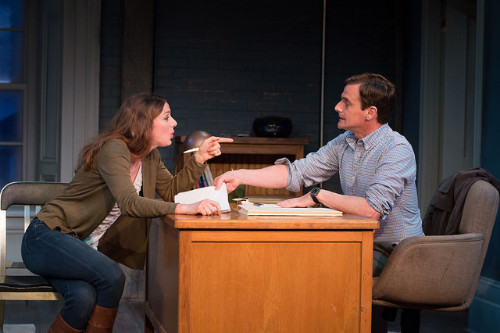 A one night stand with Neasa (Deanna Gibson) leaves complications. 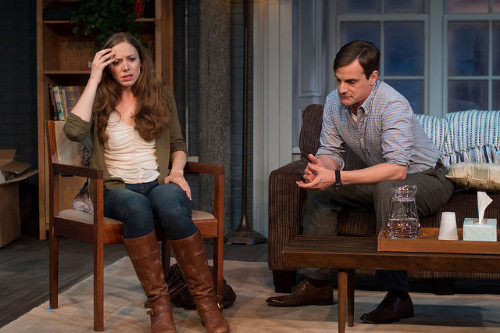 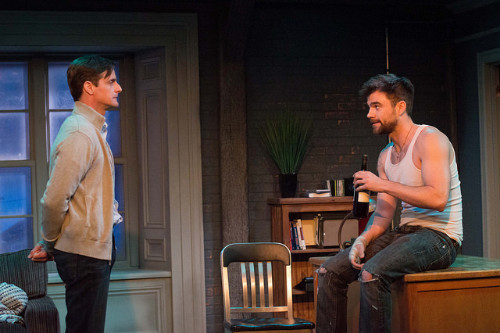 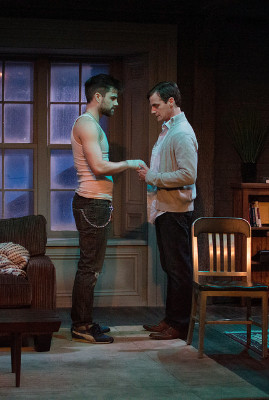 Set in a generic office in downtown Dublin (designed by Brian Prather) Ian (Mark H. Dold) a troubled former priest is embarking on a new profession as a therapist helping others in trouble.

Along the lines of a physician, or priest, heal thyself the therapist is indeed in need. It is an interesting notion that his only commercial skill is a transition from tending a flock to fleecing it. Now that’s something to think about.

The Ian of Dold is internal, up tight and a better listener than narrator. For long stretches of sessions with John (Wilbur Edwin Henry), an ordinary man haunted by the ghost of his deceased wife, he does little or nothing other than an occasional utterance of reassurance.

When “cured” John returns with a gift for Ian and warm thanks. “You did all the work” is the therapist’s typical response. It is the essence of Freud’s “talking cure” where the healer remains the passive receptor in the infectious process of transfer. Typically, as the client gets stronger the healer absorbs ever more damage.  In a startling manner we witness the extent in which the symptoms and traumas of John manifest in the ever more distrubing behavior of Ian. This includes an unanticipated final whallop.

In this low key but utterly absorbing play Dold, who is understated to a fault, is an enigma and paradox. It is only obliquely and gradually that we come to realize that while seemingly doing little or nothing he is the focus of this tight and well played drama.

Through a number of compelling roles for Barrington Stage we have come to recognize the considerable skills of Dold. Here he is most notable for showing a limited and repressed range of emotions. It provides a very different take on his thespian skills.

It is perhaps the plainness of the setting and lilting, absorbing, but seemingly ordinary language that signifies an Irish play by a brilliant playwright. As a colleague commented while exiting the Irish know how to tell a ghost story.

On many levels this evening of theatre brought us back to a fairly recent visit to Dublin. We had gone there to absorb my half Irish family heritage. Indeed, I got to hoist a Guinness and spend a night in a pub with a great folk band to celebrate my birthday.

What I mostly loved about the experience, echoed by McPherson’s compelling drama, is a poetic cadence that makes the most ordinary dialogue liltingly engaging. There is an ebb and flow that delves deeply into my DNA.

This play with its four characters is plain and ordinary, as generic as Prather’s set, and yet charged and unique.

You come to wonder why the rigid, uptight former priest, what a generic signifier for all that troubles the Irish, is so uncomfortable in his own skin. Nothing is fluid or natural with him. There are endless indicators of inner turmoil and conflict. There are mini frustrated eruptions for the most mundane actions from buzzing in visitors, opening a wine bottle without a cork screw, or finding a cup to pour it into.

How indeed can such a troubled man, so riddled by numbing doubt and uncertainty, possibly be a help to another conflicted being?

Not much is made of his former vocation and why it ended. It just hangs there as a fact. Perhaps, to an Irish audience it requires no explanation. But it is cloaked in the idea of celibacy, identity, hiding one’s sexuality, aspects of concealing and then outing a closeted persona.

After a brief session with John in which he reveals the recent death of his wife in a car accident there is an interval. This is indicated in the lighting through the window designed by Scott Pinkney. In the sound design of Brad Berridge there is a small boom box with a variety of music for moods and interlude.

Given the repressed persona of Ian the second scene with the at times shrill Neasa (Deanna Gibson) pushes him to the brink. His one night stand with a woman he can’t commit to resulted in a daughter. This burdens him with responsibilities he is unprepared to undertake. In his view this has all been a blunder.

Did Ian leave the priesthood to explore his sexuality? It is implied that he was a virgin when he made the “mistake” of a one-nighter with Neasa. Apparently, they considered an abortion but that was dismissed as sin. Indeed, she describes taking on extra shifts (while pregnant?) to ease his transition into a new life and career. She has been living with his family and needs to find her own place. He is unwilling or unable to help her.

She wants something from him that his is unable to provide.

It blurts out but frankly at such a high pitch that I wasn’t quite able to hear and understand the key words that caused her abruptly to depart. She leaves behind the peace offering of a bottle of wine that proves to be a key prop in a later scene.

The heart and soul of the drama is focused on a riveting therapy session when John returned. With a masterful feat of acting by Wilbur Edwin Henry we follow every twist and turn of his wretched tale. Problems arose from not being able to start a family. That ended then pointless intimacy. Enduring an ever more estranged marriage he describes meeting a beautiful woman at a social gathering. This leads to a secret exchange in a bar and then an awkward and sordid unsuccessful grope in a cheap hotel. Clearly it is no way to treat a lady.

His wife suspects something is wrong but his response is ever more abusive. There is an even more horrific account of a botched incident in a brothel. He is told to take a shower and then sit and wait. When the hooker never comes he demands his money back with grim consequences.

Returning home now ever more damaged the dutiful but estranged wife has supper, chops and peas, on the table. Her attempt to comfort him is so explosive that it leads ultimately to her death. Much of what happened, despite his tearful confession, remains obscure. Through which Ian listens attentively, takes notes, and offers a box of tissues.

After another interlude enter the rent boy Laurence (Patrick Ball). Awkwardly, it is what we have suspected all along. This appears to be the first time that Ian confronts wanting to have sex with a man. This is done with more apprehension than passion. Yet again Ian is estranged from his desire. Finally out he can’t own his libido. He is coaxed into it by a surprisingly tender and understanding prostitute. He is the father of a six-year-old son and needs to get a few quid together while looking for work. I’m a father too Ian offers, a daughter. By way of reassurance Laurence coveys that most of his clients are married men.

The play seems tentative during the scenes that test Ian’s sexuality and emotional commitment. I felt least comfortable with the performances of Gibson and Ball.

Overall the play was well paced by director Christopher Innvar. The performance of Henry, however, overwhelmed that of the other actors including Dold. There could and should have been more balance.

But the play gets back on track with a stunning finale.

We see Ian packing up the office. In a dialogue with the now jubilant, free and “cured’ John it is reveled that Ian is leaving hectic London to relocate with his fiancée and daughter in Limerick. Given his outing with Laurence we wonder about this domestic decision.

As the play winds down all is well. Or is it?