If It Makes You Happy 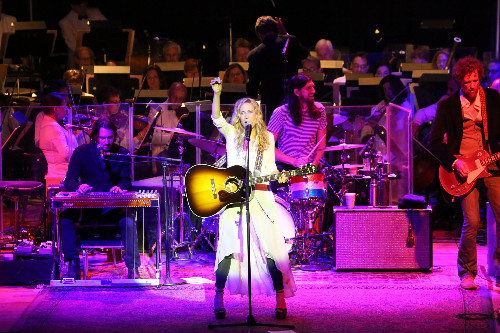 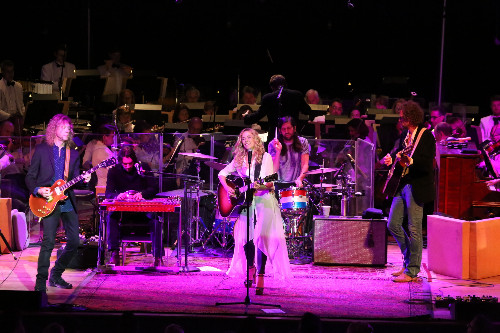 Sheryl and her Nashville based band were joined by Keith Lockhart and the Boston Pops.

Crow, who now resides in Nashville, has found her country roots, as emphasized by her back-up band and their array of steel pedal guitars.

From what was heard at the concert, it is just a matter of time until Sheryl has a number one country hit. To date, she has had a Top 20 solo country single.

Her accolades include: 27 Grammy Award nominations ( 9 winners); over 35 million albums sold worldwide: Seven albums in the Top 10 and 40 Top 10s in the billboard Hot 100.

In essence, Sheryl Crow has made a name for herself.

Keith Lockhart and the Boston Pops opened the show, paying homage to the Beatles by playing close to a dozen of their hits, symphonically, as the audience mouthed the words. Perfect weather paired with the Boston Pops innovative style created a memorable opening act for the acclaimed singer-songwriter.

After a short intermission, Ms. Crow joined Keith Lockhart and the Boston Pops. From that point on, the night was hers. Her classic hits, one by one emerged, into an audience songfest. ‘If It Makes You Happy’, ‘Soak Up The Sun’ and ‘Every Day Is A Winding Road’ were crowd pleasers.

Classically trained Ms. Crow tore the house down when she played the harmonica with such exuberance and gusto. The crowd was in awe as a new voice of Sheryl Crow emerged. She jammed with the band for twenty minutes as the energy of the audience built with each harmonica note Sheryl hit.

The music of Sheryl Crow and her band, backed up b Keith Lockhart and the Boston Pops intensified throughout the concert. She rocked the entire evening and did not stop during her hour and a half set. She is a ball of energy packed into a 5’3” frame.

Her voice was fresh and crisp. In fact, she was so on at Tanglewood that her voice topped her studio albums. Maybe it’s the amazing acoustics at the Shed, but Sheryl Crow was spot on.

True professionalism prevailed at what was a memorable 2015 season opening act at Tanglewood.

To learn more about the upcoming concerts at Tanglewood, visit www.bso.org