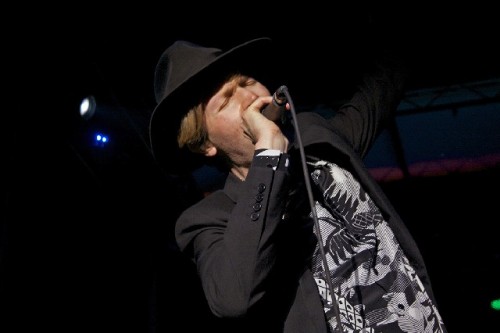 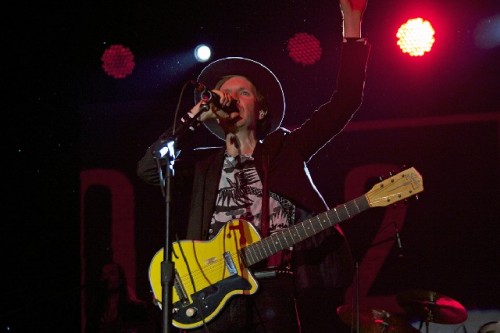 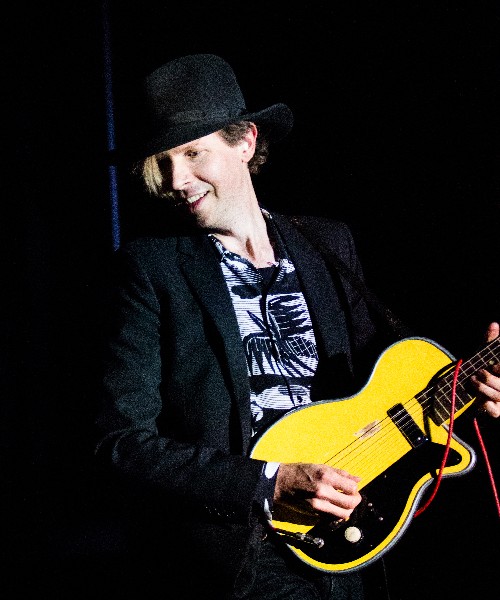 On a warm summer night. 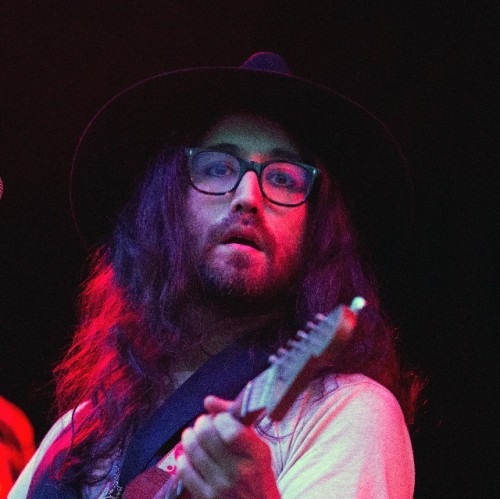 Last night a mellow audience of some 5,000 of all shapes, sizes and ages crammed into a packed Joe Thompson Field at Mass MoCA to hear the 43 year old, diminutive, multi-valent, Indy rocker, Beck.

Wearing a brimmed hat he bobbed, weaved, cavorted and twirled about delivering a two hour set which drew fans from all over the region for a celebratory, can you believe this, Tuesday night during a work week in the Berkshires.

Even Beck seemed amazed by this as he looked out and commented on the density of the audience. “How many of you are from Boston” he asked? A fair number responded.

Fans came from far and wide including our artist friends Randy Stevens and Anthony Schultz who drove some two hours from their 53 acre farm in central Massachusetts. Peter Dudek a dreadlocked artist who is part of the team for Bascomb Lodge on Mt. Greylock, a Beck fan, was visiting Joe Thompson Field for the first time.

Wandering by Berkshire Eagle photographer Gillian Jones commented that she was experiencing a “contact high” given thick clouds of weed wafting in the air. Astrid thought it smelled like skunk. Which, I informed her, is what they call it in Amsterdam.

There were endless lines for beer and at the back of the field numerous food concession stands.

As Beck remarked you couldn’t ask for a better night under the stars.

He was touring in support of a new CD “Morning Phase” which has been welcomed as one of his best in years. Introducing the band he informed us that these were the musicians who cut the album with him as he interspersed new songs with a range of familiar hits. The band performed in a variety of styles from flat out rock to acoustic folk, and country blues that evoked Sonny Terry and Brownie McGhee particularly with its harmonica, or Mississippi saxophone licks.

Known for being eclectic Beck richly displayed all aspects of his versatility. Prevalently he astonished with a strong voice and commanding stage presence.

There were hits mixed with the new songs.

Many revealed self deprecating anthems like “Loser” that we readily identify with. It is always a bit surprising coming from celebrities and rock stars. It’s a good reminder that fame and fortune hardly separate them from humanity. Through the stagey and outgoing charisma one could feel the unique vulnerability of the artist.

There were many special moments and highlights. That kicked off with the intriguing opener “Devil’s Haircut.” Talk about a walk on the dark side. It evoked classic country blues themes like “Me and the Devil” by Robert Johnson.

When he reached out to the audience channeling “I Feel Love” the feeling was palpable. It coursed through the women dancing near me lost in the music and its embracing emotion.

From “Black Tambourine” he slid into “Novocane.” The latter song references the drug treatment program of Scientology of which the musician is a second generation adherent.

Between songs he occasionally spoke to the audience remarking on the unique ambiance of a gorgeous Berkshire evening. He pointed to a round, cement structure covered with reflective silvered ovals that flickered in a psychedelic manner. Many were taking cell phone shots and selfies next to it.

The ballads were mellow but on a sultry summer night the audience came to rock.

The evening opened with a respectable set of eight songs in a range of styles by Sean Lennon fronting Ghost of the Saber Tooth Tiger on guitar and vocals. The audience was attentive but mostly apathetic to “Animals” “Poor Paul Getty” “Xanadu” “Golden Earings” and “Long Gone.”

With the official launch of the season yet to come it is significant that Mass MoCA has already notched the outstanding rock concert of the season. All there is to look forward to is Train, yet again, boring, at Tanglewood.

It will be a year before Wilco returns to Mass MoCA but with this one nighter Joe Thompson Field is not going fallow. The facility is there if MoCA wants to dig deeper into the concert business.

Walking back through town after the concert, however, it was quiet. Yeah, too quiet. Well, it was a work night.