David Suchet in The Last Confession

Reaching Beyond Hercule Poirot in LA 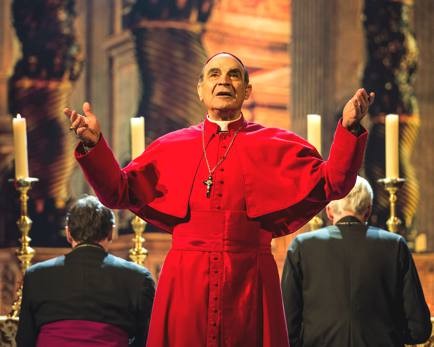 If the name David Suchet doesn’t ring a bell right away, regroup and think Agatha Christie’s famous detective Hercule Poirot.  The British actor has portrayed the quirky Belgian detective in all 74 episodes of the Christie canon on PBS Masterpiece Mystery series.

Now he sheds his Belgian detective costumes for the robes and red hat of a Roman Catholic Cardinal in the powerful drama “the Last Confession”, written by first-time playwright and lawyer Roger Crane.

“The Last Confession” is a tale of intrigue, surrounded by mystery, and wrapped in the panoply and ritual of “great theatre” that is the Catholic Church. Lawyer-playwright Crane sets his play not only, inside the Vatican, but squarely inside the Papal chambers where the disagreements and ambitions of the Princes of the Catholic Church come into sharp focus as various factions within the powerful governing body, known as the Curia, continually lobby each other and align themselves with various cliques in an effort to choose the next Pope, and even succeeding Popes.

One doesn’t have to be Catholic to understand the core story. One can easily identify with the various characters because the Curia is structured along the same lines as an American business corporation.  The Pope is like the chairman of the Board, and the men who actually write and implement the policy decisions in the day to day running of a worldwide Church are the Pope’s college of cardinals, and in particular, the Curia, the Pope’s inner circle of advisors.

In the production currently on the boards of LA’s Music Center’s Ahmanson Theatre, David Suchet portrays Cardinal Giovanni Benelli, a friend and adviser to the recently crowned caretaker Pope John Paul I, the successor to the conservative Pope Paul VI.  According to program notes by playwright Crane, the powerful conservative Curia now begin their maneuvering campaign to undo the 1962 reforms of John XXIII and the second Vatican Council.

Much like an ecclesiastic chess game, the cardinals of “The Last Confession” politic, strategize and lobby one another in Machiavellian fashion on the selection process of future Popes.  If this storyline sounds familiar, it’s because we also run our US Congress in much the same way, except there is more compromise in Rome than Washington DC.

When Pope John I dies thirty-three days into his reign, the paparazzi and the Italian media begin a campaign suggesting that his death is a Vatican mystery that needs more transparency.  It is common knowledge the Mafia-connected Vatican banking advisers have been defending charges that the bank has been involved in inappropriate financial practices.  Against this backdrop, Cardinal Benelli (a commanding David Suchet) takes over the investigation and delves into resolving the issues while at the same time, promoting his own candidacy to become Pope.  As G.K. Chesterton said, “power corrupts, and absolute power corrupts absolutely.”

The cast of nineteen men (how apropos) and one woman, Sheila Ferris, who plays Sister Vicenza, are uniformly outstanding in their portrayals as Princes of the Church.  It’s an outstanding ensemble cast of actors that literally inhabit the skin and minds of the characters they portray.  Playwright Crane is very careful in laying out his story and plotline, as the play is based on actual events and actual individuals; albeit with lot of literary license thrown into the mix.

“The Last Confession” is a visual feast for the eyes as well as the ears.  The blood-red robes of the cardinals set against the papal chambers and the gleaming white robes of the Pope make for great theatre.   There are twenty in this splendid cast, but there are always standouts and they include: Nigel Bennett as Cardinal Villot; Kevin Colson as Cardinal Baggio; Philip Craig as the Confessor to Cardinal Benelli; Donald Douglas as Pope Paul VI; Roy Lewis as Cardinal Bernadin; Bernard Lloyd as Cardinal Ottaviani; Stuart Milligan as Bishop Marcinkus of the United States; Richard O’Callaghan as Cardinal Albino who becomes Pope John I; John O’May as Cardinal Felici; and George Spartels as Cardinal Lorscheider. Like leaders of any worldwide body, these people are formidable, fascinating,and always interesting to watch.

Director Jonathan Church, has the technical arsenal of the Ahmanson Theatre to command and he utilizes its full potential with a visually stunning stage design by William Dudley along with the clever lighting plot of designer Peter Mumford who gives us the cathedral-like shafts of light and flickering candles that renders the stage in the action and feel of its millenial of ritual and pageantry. The costumes designed by Fotini Dimou, are both familiar and spot-on.

“The Last Confession” is an enthralling piece of great theatre that’s not to be missed.  The Ahmanson Theatre in Los Angeles, is the only venue in the United States to present the production as it continues a world tour.