Beckett's Happy Days is Here Again at the Flea 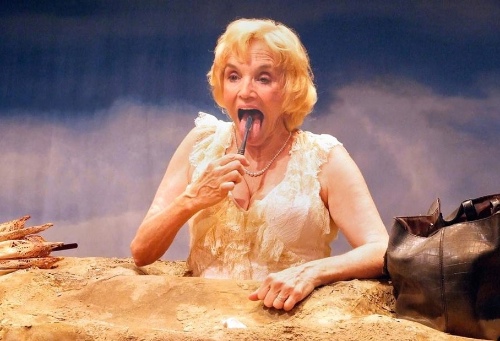 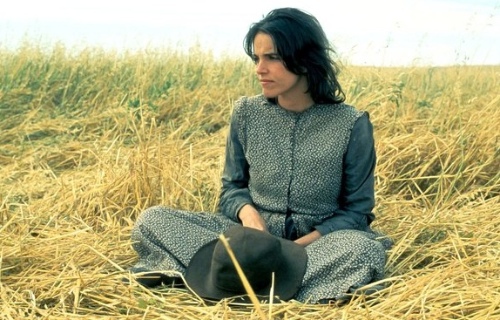 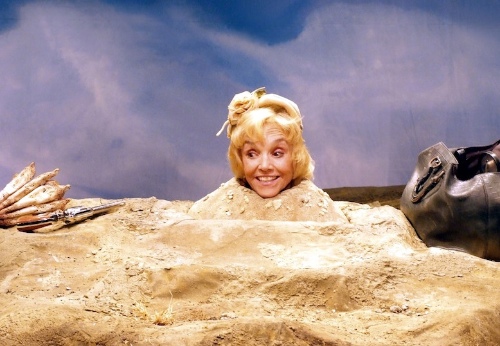 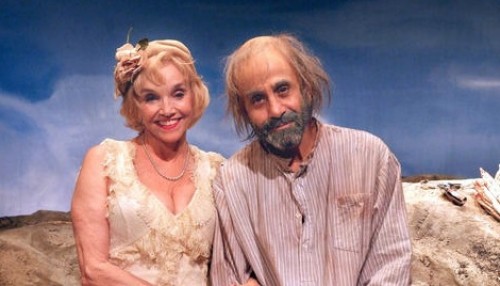 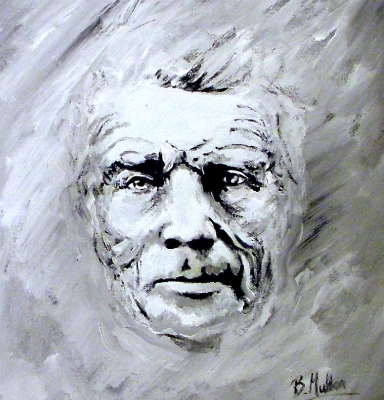 Samuel Beckett attended a performance of live music almost every night, except the six months he spent visiting art museums.

His directions for the set reflect his understanding of visual forms: a hunk of hardened earth rising from the stage, with a deliberately trompe d'oeil sky in this case in a semi-circular frame around the mound.  His plays are also musical compositions, language being his notes.

The song that Winnie, who is of course waiting for something to happen, is waiting to remember Franz Lehar's Merry Widow Waltz:

Hear sweet music softly saying, "I love you"
May from your heart come those words "I Love you too"
Tenderly hands pressing fondest vows renew
Saying once again, my love, "Ah, I love you."

This is Winnie's song.  The song.

Is Winnie looking forward to being a widow?  Not at all.  When Willie speaks, it makes Winnie's day....happy.  He is greeted like a ray of sunshine by this already sunny creature.

Andrei Belgrader, who worked with the actors on Monk, a popular TV series, directs to reveal all of Beckett's nuances and charms.

You may remember Willie's few and far between words: fornication, castrated pig, and two or three others.  Beckett lavished his language on Winnie, mixing Shakespeare with the Book of Common Prayer in Joycean juxtaposition. Adams wraps the tongue Willie is always looking for around a lushness of language, particularly the cornucopia of vowel sounds.

Adams also exemplifies the generosity Richard Powers' portrays in his book on the genetic basis of happiness.  Powers may well have taken off from Beckett in the fleshed out, rich description of this trait.  Adams exudes it on stage.  Even as she sinks into the earth and nods in and out of sleep, she is suffused with light and warmth.  Here is the Beckett character who is easiest to love and admire.  Who is easiest to spend time with.

Brooke Adams has a wonderfully maleable face on which she has to rely completely in the second act: she is buried up to her chin.  Her smile cuts across the face ear to ear.  But as she retreats from the world, to sleep, perhaps to end it all, her face tightens toward the center. Her mouth is pursed and tiny, her eyes, usually set wide, seem to come together.

Willie is consigned to the back side of the mound, and we see only a hand, his bald head, a hat, a newspaper for a long time.  Winnie calls him her crawler, and we can image his entrances and exits from a hole as she imagines it.  The humor in absurdist drama is often dark, but here it is slapstick and only occasionally edged with anxiety.  Old style brings her back.

Passersby observed by Winnie, named either Showers or Cookers, wonder if they should dig her out, but continue on, the last humans to pass by.

When Willie finally decides to come to the other side of the mound, he doesn't just see the other side.  He sees Winnie, love of his life.

At the play's end, Winnie and Willie grope for each other, as he slides on the rock, rolls over, all decked out for reunion in tails, spats and a top hat.  The waltz suggests gliding, and the bodily fumble isn't quite what Lehar had in mind, but surely the end note is upbeat:  Every touch of fingers, tells me what I know, Says for you, it's true, it's true, You love me so!

At the end of this time words fail.  With Adams and Shalhoub not a word is squandered.