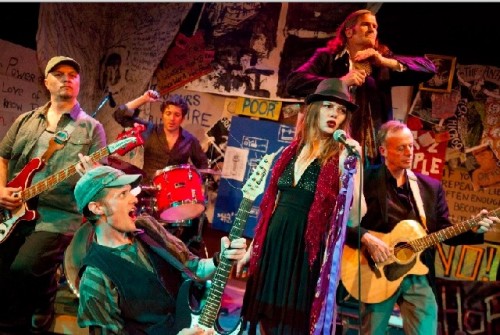 The set is a garage, where the band of assasins prepare to kill the Grand Duke. This production is made present by the use of music as language to accompany the Nobel Laureates philosophical musings. It works brilliantly. 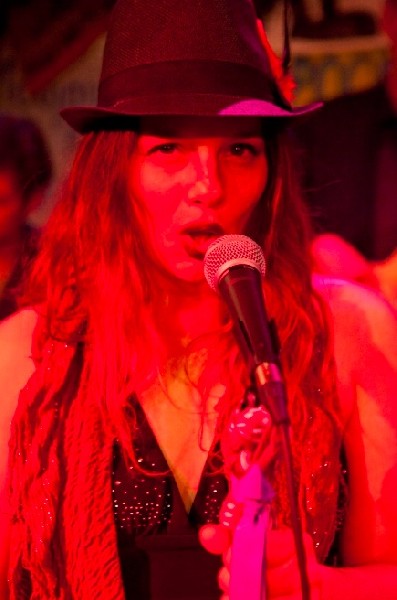 Nicole Wiesner is perhaps the most complex character, veering between the strong tug of true love and her revolutionary commitment. Huntington audiences have been treated to her in the past. 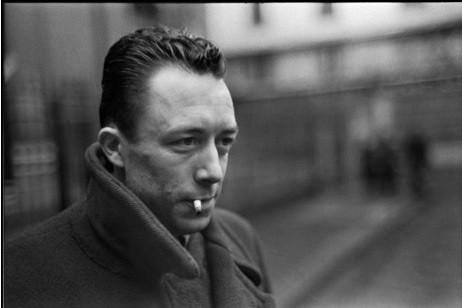 Marajuana incense wafted through the little theatre in Chicago (this is not Denver). The author photographed by Henri Cartier Bresson.

In some ways Camus’ plays are as difficult to translate as the famous first line of The Stranger, best expressed, “Today, mother died.” It is the ‘todayness’ that often gets lost in translation.

Pascal Collin, a French academic and actor, collaborated with Nicolas LeGuével on this productions’s translation of Camus’ Les Justes. Because they also worked with the Belgian director Valery Warnotte, the ‘presenting’ of what on the page reads like an philosophical treatise comes very much alive. There is a play between the preparations to kill the Grand Duke and the outward turns to the audience to comment on ethics and morality.

In opera, we learn that simply setting a work of art in the present, or future, does not a lively, present production make. The lesson that the Trap Door company teaches is that acting committed to the moment makes drama sizzle.

The Trap Door gives us these performances one after another. Michael Garvey as the leader of the murderous ‘Just’ group is a man who bulks up like a monument, as Russell Crowe does in Noah. He is supervising the murder of the Grand Duke Sergei Alexandrovich in 1905.

What jars seeing the play at this moment in time is that the hundred year anniversary of the assassination of Archduke Franz Ferdinand of Austria is being noted right now. Curiously that assassin, Gavrilo Princip, is not at all like the worldly, educated members of the ‘band’ we are watching.

Antonio Bruentti gives a stunning turn as Yanek, lover of Dora, the band member assigned to throw the bomb, and a superb percussionist to boot. It is his language on the drums, and beating a box stool he sits on mid stage that draws us into the double language of this production: music and words. The intensity of his beat, its sometimes primitive tones, and its variety reflect and underline his emotional state.

The seemingly weak link in the group, touchingly drawn by actor Daniel A. Holcombe, is sickened by the scene. While he will not abandon his compatriots, he asks to be transferred to an administration job. But like everything unfolding before us, he too will take a turn.

Alzun Pelesic as Stephan is all muscular bravado. He never leaves the bass register on his guitar, which he handles like a rifle. Pascal Collin as Skouratov drives Yanek and Dora crazy with his twists and turns. Nicole Wiesner is the go-to girl in every way imaginable, including building bombs.

Two hours without intermission fly by as you reach out to grasp the subtle arguments of Camus. You are wrapped in the bands’ preparations and performance and left to wonder whether being hanged is the greatest honor of all.

The moving force behind The Trap Door company, which performs the world over, is Beata Pilch who sometimes directs. For Regarding the Just she became a smashing Archduchess who goes to prison to talk to her husband’s assassin, trying to show him the human side of his act. Terrific legs exposed by 21st century costuming are one of the treats Pilch’s aristocratic turn reveals, as the entire production abandons 1905.

The Trap Door’s next production will be tweaked in Poland where director Anddrej Dziuk leads the Teatr Witkacy.