Morphoses in Within (Labyrinth Within) 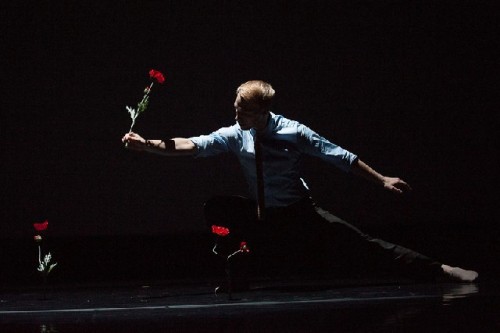 Pontus Lidberg in Within (Labyrinth Within) Photos by Christopher Duggan courtesy of Jacobâ€™s Pillow. 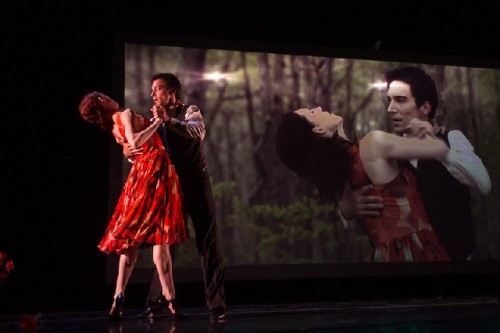 Dance by the Swedish choreographer. 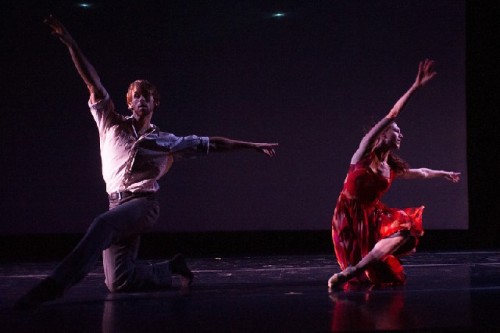 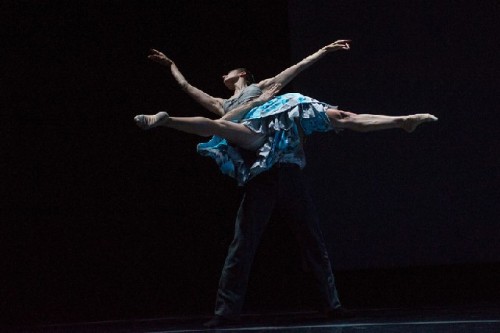 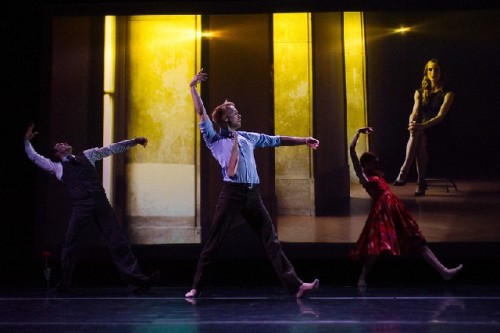 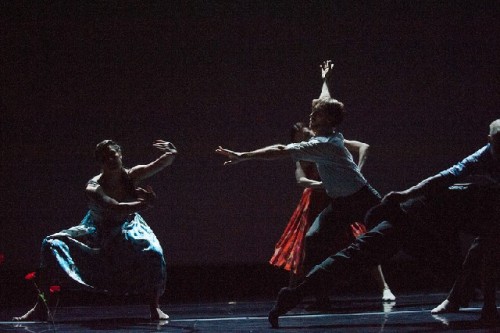 The ennui of Nordic romance.

The world premiere of Within (Labyrinth Within) by the Swedish choreographer and dancer Pontus Lidberg at Jacob’s Pillow is a daunting and haunting confluence of live dance combined with a projected film behind the performers that at times echoes what’s on stage. In the final sequence the film stands alone completing a complex narrative of estranged marriage, passion, and jealousy.

Initially, it is difficult to intuit the intentionality of the single work of about one hour’s duration that comprised the program.

We first encounter the supine Lidberg on a mostly dark bare stage. There is a single spot on him (lighting design by Lidberg and Carolyn Wong). As he writhes, turns and remains mostly parallel to the floor we observe that he is attired in street clothes (costume design by Karen Young). This includes black dress pants, shirt and tie (a solid nondescript color).

There are several single stems of red flowers parallel to him. On closer inspection they prove to be poppies. This charges them with investments of iconography from fragility and transience to narcotic haze. The Pre Raphaelite painter Rosetti used the poppy in a painting remembering his wife who died of an overdose from laudanum.

So the poppy is indeed a bloom with more than just color when evoked in an artistic context. In this case the poppy is a unifier through the sequences and lapses that eventually morph from anxious, abstract dance into a quite literal narrative.

When the light level is elevated Lidberg is joined on stage by four other dancers creating a series of pas de deux partnering and the third male as odd man out. The men also wear pants, shirts and ties while the women are attired in floral, summer dresses with full, flowing skirts.

The initial phase of the dance is performed in silence until the minimalist, repetitive, pulsing, music of Pulitzer prize winner, David Lang, folds in conveying the mood of young love, longing, passion, yearning, ennui and estrangement. The music and choreography convey a feeling of Nordic romance with its confluence of sensuality and fatalism.

When the back projected film kicks in on a long screen that almost fills the stage there is an intriguing juxtaposition. At times the projection and live dance are in synch with the impact of making the individuals appear to be duplicated and enlarged.

The schematics of Lidberg are complex and never predictable. There are constant shifts between music and silence, film in tandem then not. At times, when film is not projected, the screen become a scrim. It was stunning when there was a woman dancing in front and another behind executing the same movements.

Eventually our attention morphed from the live performance to the film. We noted a sequence of settings: A bare stage set in the woods, a beach, passages of sky, interiors from office to home, intervals in a car, then the long haunting corridors and empty rooms of an abandoned castle.

Intently following the development of the dance there was the challenge of absorbing the style of the company. They remain grounded with few lifts and leaps but lots of turning and reaching movements in long legato lines.

The “plot” entails the jealousy of a business man danced by Giovanni Bucchieri. We find him becoming ever more mad and enraged over the real or imagined affair of his wife performed by Wendy Whelan. In real or fantasy sequences she partners with her lover played by Lidberg.

Have they come to a barren marriage? Or, is she exploring other options when he curls up in bed and puts out the light spurning her sexual needs? Perhaps, and this is speculation, she is aware of his bisexual inclinations which are obliquely suggested.

It was surprising that the film with music became so literal. Previously (it was completed in 2010) it stood alone and has now been reconfigured with the opening sequences and tag with live dance.

Critically it begs the question of addition or subtraction? Is the extension of the first work into an expanded new one an improvement or confusion? There are elements of elation and confusion. The concept is more bold and challenging than the execution.

The thread that runs through and unifies the piece is the use of the poppy. It appeared prominently in the beginning of the dance; then got introduced again in the film. When the successful business man is in the back seat of his chauffeured car we observe that he is holding a wilting poppy. They do not thrive as a cut flower and hence a signifier of the transience of love.

It is not clear whether he is on the way to a rendezvous with his unseen male lover? Or to confront his wife? Clearly a wilting flower is not an appropriate bouquet.

Finally, enraged, we find him armed with a weapon, not a knife but a piercing implement. We assume that he will confront and kill his wife. Arriving at the maze of castle rooms (the labyrinth of the title?) he first enters an antechamber. Filled with, yes, poppies. Now, perhaps, their red represents blood, passion and murder.

The narrative ends with a pas de deux between seemingly resolved and reunited husband and wife. It repeats much of the chorography of wife and lover but entirely drained of that passion.

When the lights came up for the bows of the dancers we observed a single poppy on the stage.

And so the evening morphed into the restful embrace of Morpheus.