The Wall Is Spectacular At Fenway Park 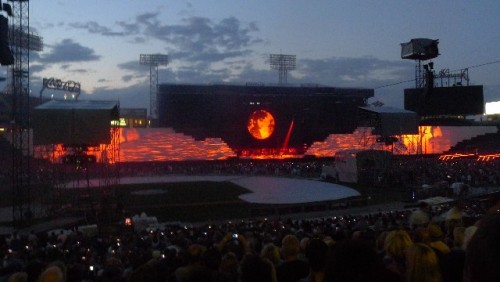 Beginning of the Concert at Fenway Park 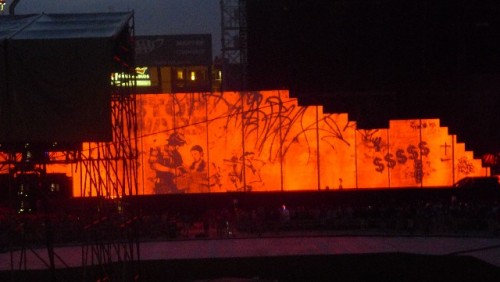 Portion of The Wall with Projection 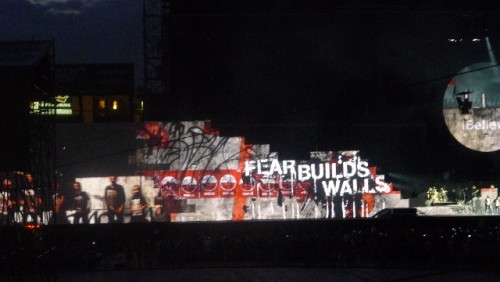 Projection on Another Section of The Wall 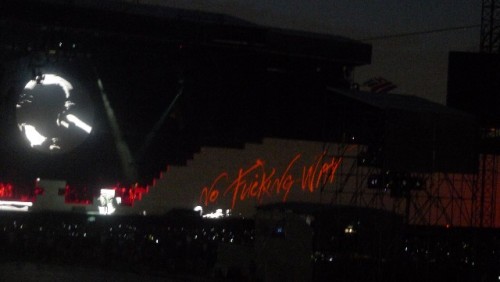 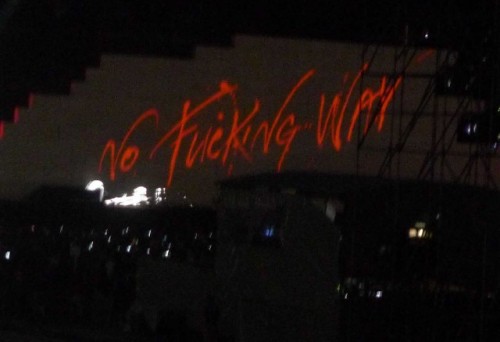 Poetry and Profanity Punctuated The Wall 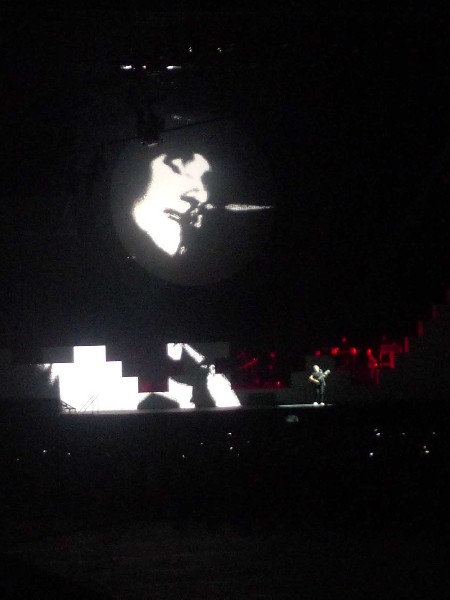 A Projection of A Younger Roger Waters Performing with Pink Floyd 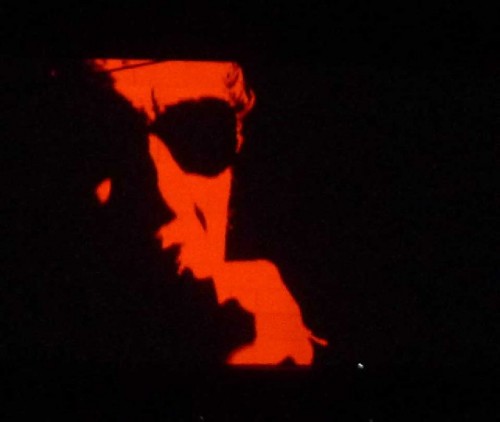 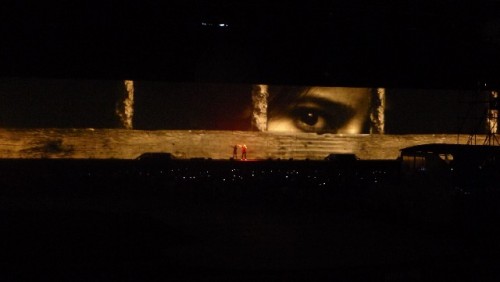 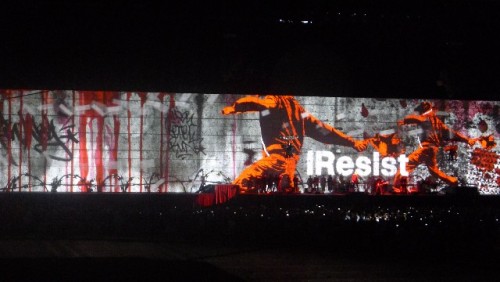 Purposeful Graffiti on The Wall 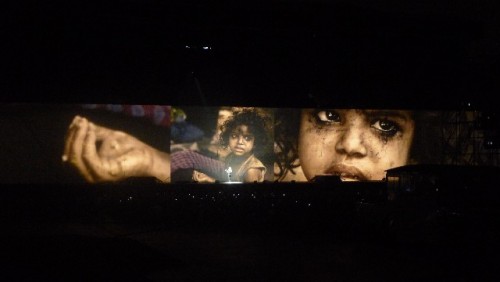 Victimization on The Wall 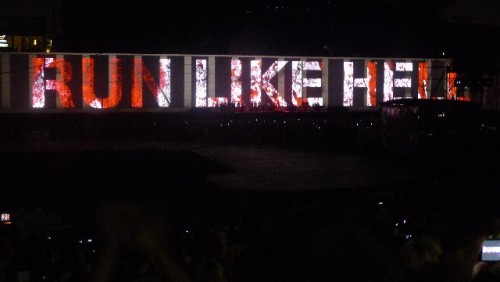 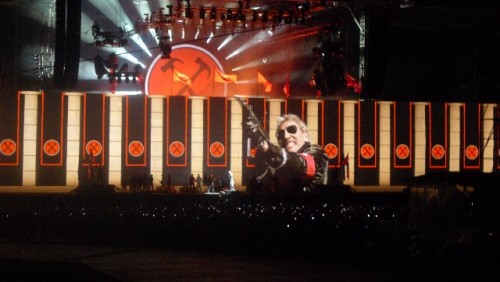 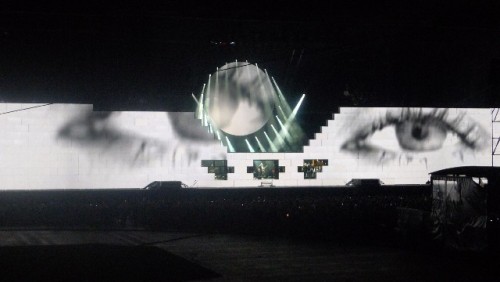 Big Brother Or Rather Big Mother Watching You 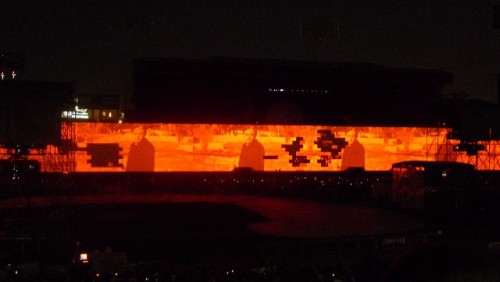 Holes In The Wall 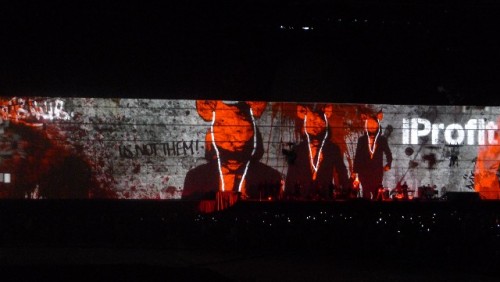 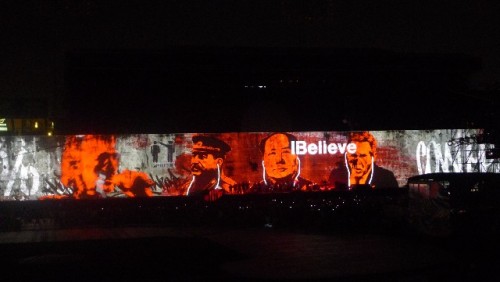 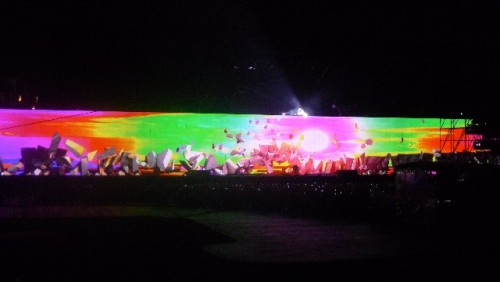 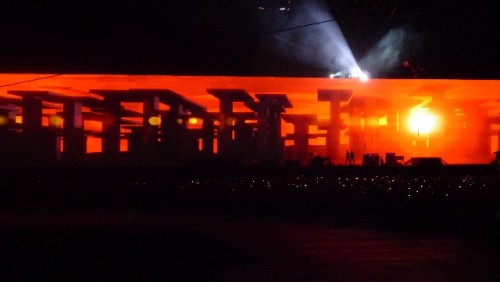 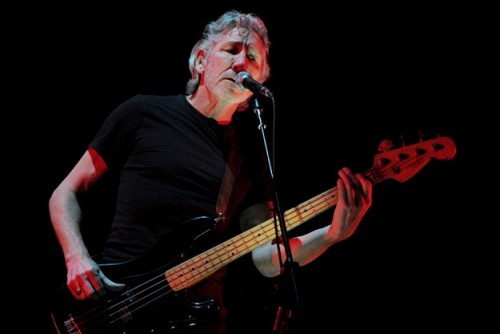 The Wall
By Roger Waters
At Fenway Park
Boston, Massachusetts

Beginning with a spectacular pyrotechnics and projections show that stretched across a stage and ersatz wall that were two football fields long, a spry 68 year old Roger Waters delivered the goods last night at Fenway Park.

His over three decade old, rock opera The Wall was visually updated to reflect contemporary wars, disasters and militaristic events. The old/young guy Waters continued to rage against authority, capitalism and violence.

The creative development of the concert took over three years. Engineers, animators, lighting experts collaborated with Waters to create the audio/visual spectacular. Considering its scale, the cost must have been exhorbitant. There are 32 highly refined projectors alone. It all seemed worth it. The former Pink Floyd music (Waters owns the rights to it) still holds up amazingly well.

The concert was punctuated by virtual poetry and and a bit of profanity. At times, The Wall was a canvas for righteous graffiti expounding on resistance to corruption and war, authoritarianism, alienation and unfairness.

The audience was made up of a major group of Pink Floyd and The Wall fans who knew all of the words and others who had heard about the pageantry. It was a song and visual celebration for a concensus crowd of late seventies and eighties music buffs. Hugging The Wall, the crowd included individuals of several generations.

The original music of The Wall explores abandonment, institutional abuse and isolation that is symbolised by the metaphorical wall. The songs act to create the storyline of events in the life of the protagonist, Pink, a character based on Roger Waters, whose father was killed during the Second World War. His grandfather was killed during WWI as well.

Pink is oppressed by his overprotective mother and tormented at school by abusive, monsterous teachers. Each of these becomes metaphorical "bricks in the wall." Somehow he eventually becomes a rock star. His relationships are made toxic by bouts of infidelity, heavy drug use, and outbursts of violence. As the marriage deteriorates, he finishes building his wall. This completes his own isolation from intimate human contact.

On the backside of his wall, Pink's crisis escalates, culminating in an hallucinatory on-stage performance believing that he is a fascist dictator performing at concerts that are like Nazi rallies, having unworthy fans set upon by thugs.

Overwhelmed by guilt, Pink places himself on trial. Here his inner judge orders him to "tear down the wall." This opens himself to the outside world. The concert goes beyond this to relate The Wall to contemporary conditions and issues of peace and non-violence as well as non-exploitation.

The original Pink Floyd album was a best-seller for more than 15 years. All the surviving members of the band became immensely wealthy. The album includes several references to former band member Syd Barrett who was zonked out most of the time. Nobody Home with lyrics like "wild, staring eyes" suggests his condition during Pink Floyd's abortive early 1967 US tour.

Comfortably Numb was inspired by Waters' own injections with muscle relaxant to combat effects of his hepatititis (probably caused by sharing unclean needles) during Pink Floyd's In the Flesh Tour. Most of The Wall's music is pleasant if not passionate. The extended riffs are melodiously performed. The knowledgeable members of the crowd grooved on it. The others were embraced and rocked by it.

During the original 1982 Pink Floyd's The Wall Tour, a 40-foot high wall of cardboard bricks was gradually built between the band and audience. Gaps in the bricks allowed the audience to view various scenes of the story by animations that were projected onto completed parts of the wall. Several characters from the story were realized as giant inflatibles.

Both of these creative concepts are integrated into Waters' latest version but in bigger and technologically more complex ways. Though never practicing, Waters was trained as an architect. And there is an architectural quality to the visuals. The whole Wall is now a vehicle for a continuing series of magnificent projections throughout the length of the concert. Inflatibles of the abusive "Teacher," various other monsterous creatures and the "Capitalistic Pig" are all integrated into the new show. Like a giant porcine derrigible, the pig wonderfully floats over the front part of the audience  and somehow deflates.

This is Roger Waters' show. On the critical side, there is a bit of hypocrisy of the vastly wealthy old rock and roller creating a mega-million dollar (probably over $150 million) concert staging motif selling out high-priced ticket concerts (breaking Rolling Stone attendance numbers and setting financial records) who rails against the capitalist pigs and big corporations.

His politics, religious and social attitudes are a bit selective as well, not insulting Christianity in general or Catholicism in particular very much. But Jews and Muslims seemed to be singled out. Waters is an avowed atheist. Somehow, the Pope got a pass from Waters.

Let's not forget that Waters is a child of the '60s, part angry protester and loving flower child. Simple statements even based on complicated autobiographical issues are not so easy to make into universal messages. This version of The Wall achieves a great deal.

The irony is not lost on having the concert venue for The Wall at the location of one the great walls in all of sport, Fenway Park's Green Monster (37.5' high x 240' wide).

It is better politically and socially-derived performance art than most performance artists can do. It is better projection art than most projection artists have ever done. Perhaps, it is a function of long-range planning and gigantic budgets. However, the often political and polemical work by the ultra serious Krzysztof Wodiczko, an artist internationally renowned for his large-scale slide and video projections on architectural facades and monuments does not have the charm or energy or virtuosity of Waters' The Wall images and projections.

Yet this is still only rock and roll. And we love it.

This production has wonderful music, performance art, animation, film  and logistics all wrapped together as spectacle. The Wall is an homage to rock and roll as political and social statement. Roger Waters, rock on.

An interesting 60 minutes segment about Roger Waters and The Wall: