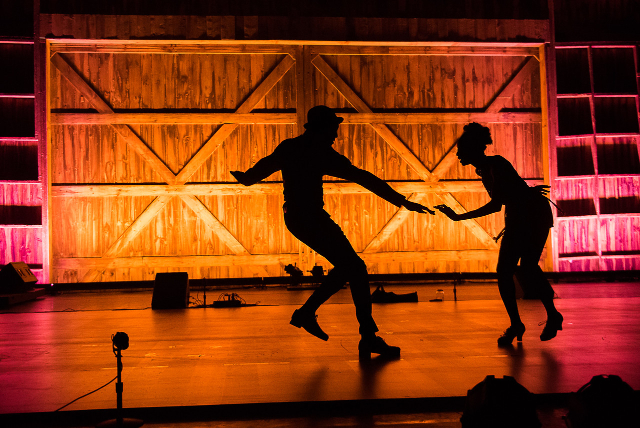 From Harmony: Tap in Motion. Pillow photos by Christopher Duggan. 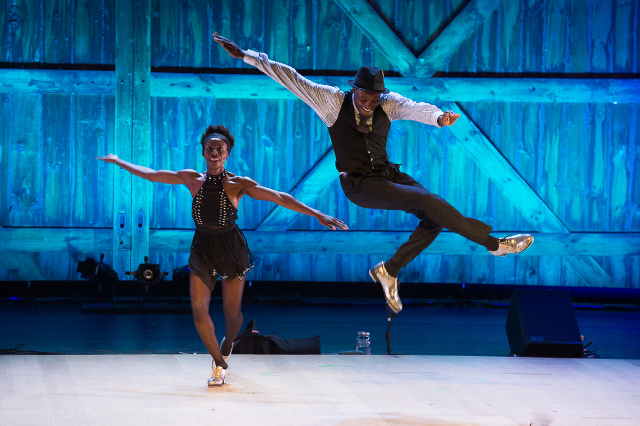 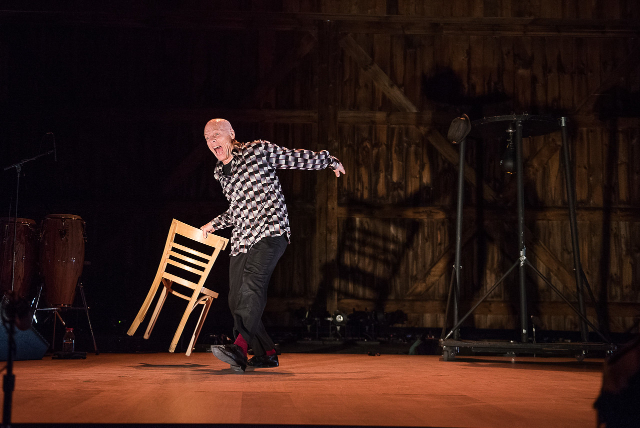 A monologue about boxing by Joe Orrach. 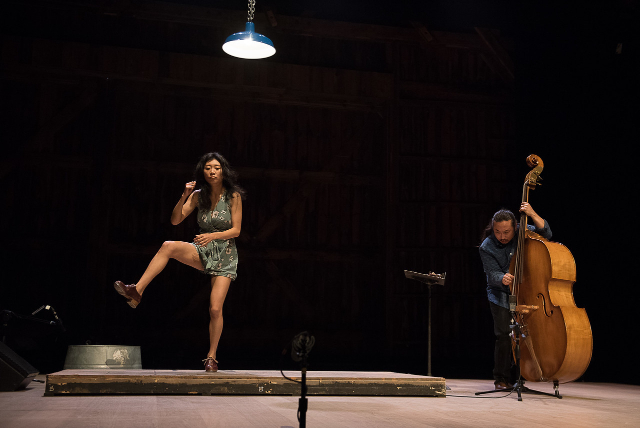 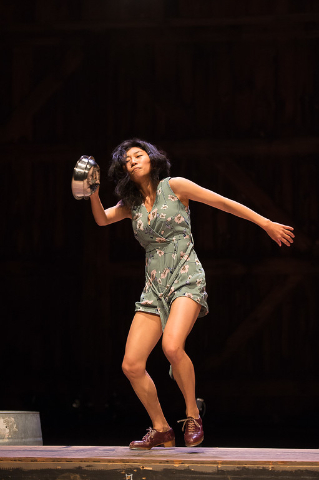 Based on a breakout Pillow performance Seo is a rising star in American dance. 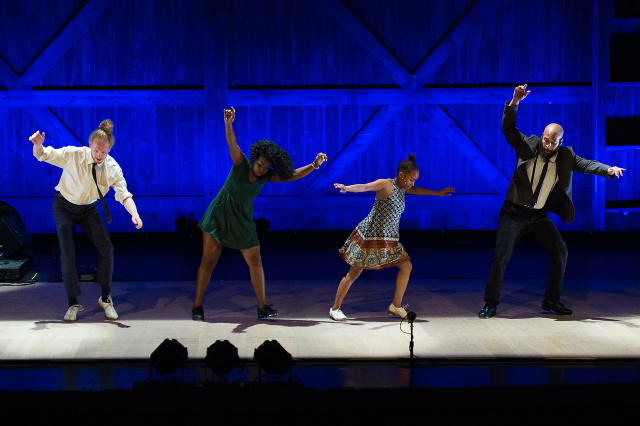 The quartet of Supreme Love. 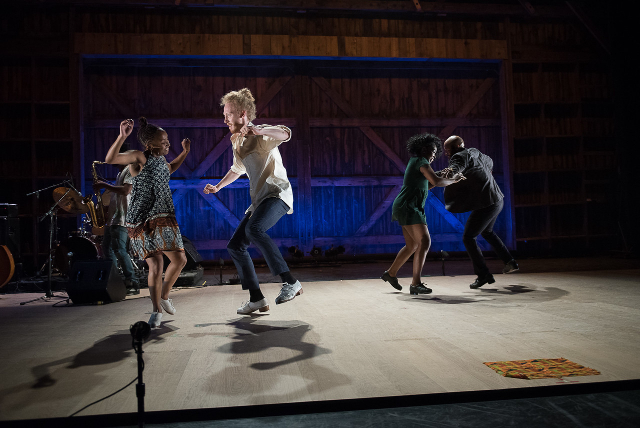 Pushing it to the limit. 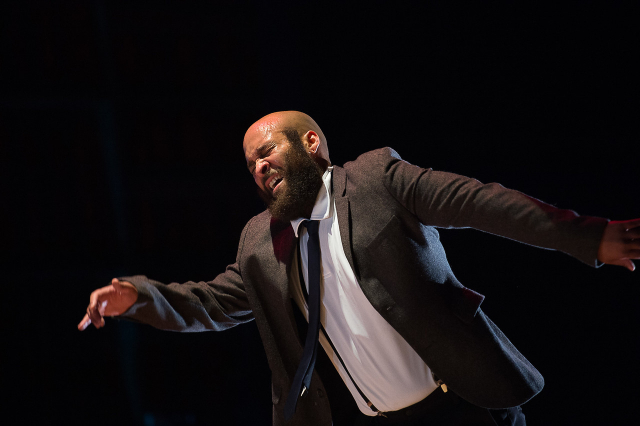 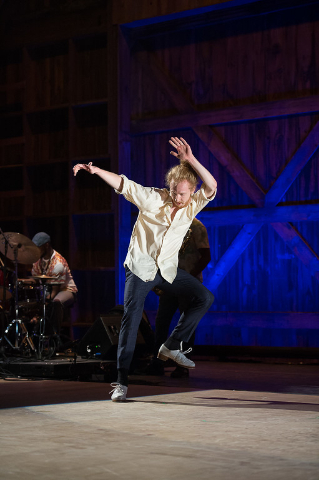 The stick figure dance of Ian Berg evokes the Scarecrow of Ray Bolger.

Now pushing forty, Michelle Dorrance, born September 12, 1979,  has evolved as an elder statesman and driving force behind the expansion of tap dancing.

It is an American art form with roots in improvisation and black culture, as noted by the program Tireless: A Tap Dance Experience, which she curated for Jacob's Pillow Dance. In recent years tap has expanded globally.

To its credit the Beckett based festival was early to embrace her meteoric rise.

That relationship started with an appearance for Inside Out an alfresco series on an outdoor stage with natural lighting that is free to the public. An appearance there is often an audition for Pillow's two inside stages.

In 2013 she was the winner of  the Jacob's Pillow Dance Award. In 2015 she was named a MacArthur Fellow one of the nation's most prestigious arts awards. With her company we have reviewed two of her four prior Pillow appearances. During the recent academic season she performed with her company as a guest artist for Saundra Burton's dance program at Williams College.

For this latest appearance at Pillow, however, encouraged by the new Pillow artistic  director, Pamela Tatge, they have come up with something different. She was new to the job when Michelle was finishing a residency. In their conversation, as they informed the audience during a pre performance chat, there was discussion of many emerging and established artists that Dorrance encountered and was inspired by in her travels.

What evolved from that was an invitation for Dorrance to curate a program featuring a sample of these artists.

With an intermission the event was divided into four segments. Other than the first set. which was inspired by the recordings of Duke Ellington, the other three segments were accompanied by the musicians Matthew Clark, Daniel Gonzalez, Irvin Pierce, Takashi Seo and Isaiah Spencer in solo and group arrangements.

Appropriately, starting the program there was a vintage sensibility in Harmony: Tap in Motion which featured the siblings Joseph Wiggan and Josette-Wiggan-Freund. There was a delight in seeing how they moved to and were inspired by the classic Duke Ellington "Jungle Sound"  from his Cotton Club era.

There was an emphasis on style and elegance. He miscued on traditional hat tricks with his derby. It proved to be distracting as it was repeated with mixed results. But they remained on track particularly with her stunning solo sequence.

The program notes affirm the credentials of Joe Orrach in the field. But his solo narrative from an uniquely Puerto Rican perspective In My Corner was overly drawn out and added little to the theme of aspects of tap dancing. There was an Afro-Cuban flavor to the music that accompanied his spoken word.  With a story more about boxing than dance he walked us through aspects of training from skipping rope and inventive approaches to the speed bag. At the end of the monologue, when he described a transition from ring to stage, he laced on tap shoes with a too brief hint of his prowess as a hoofer.

The second half of the program was more like what we had anticipated. The next two segments, Aun and Supreme Love were fabulous.

The solo by the Japanese dancer, Reona Seo, improvising to the bass performance of  Takashi Seo, raised the bar for the aesthetic range of the medium. Independent of dance he is a remarkably inventive bass player. His execution, pushing the limits of the instrument, sharply underscored how jazz has grown to have global practitioners on a par with the best American artists both past and present.

Coming at paradigmatically American art forms, jazz and tap, from a Japanese perspective allows for freshness and invention. In this case, what a great joy, the whole was greater than the sum of parts.

Reano started on the floor demonstrating her stuff. It was subtle and understated while galvanic and absorbing. The dancer and musician at times leaned into each out exchanging riffs and pushing each other to new levels. The sound surprised and fascinated me which evoked viewing just how she dug and tossed it back. The exchange of riffs hearkens back to the famous cutting contest in Kansas City when the Hawk, passing through on a gig, famously got blown out of town by the local cats.

That call and answer of riffs is as old as field hands in cotton fields or professors showing their riffs during Harlem rent parties. Those were occasions when Bessie Smith would fall by demanding a pig foot and a bottle of beer.

While the floor work and platform generated unique sounds she upped the ante taking the invention  to a new level with a tin washtub. That started with some rim shots on the edge. Then she stood precariously on the tub and evoked sounds that we have never heard before. It was just wonderful while he matched this invention lick for lick.

With this breakout Pillow performance it is likely that Reona Seo will soon become a rising star in American dance. She left the audience with a taste and hunger for more.

Yet again with the confluence of jazz and dance Supreme Love, choreographed by Jumanne Taylor for two male and two female dancers, just blew us away.

Kudos to the musicians for taking on the music of John Coltrane's classic 1964 album A Love Supreme. It is widely regarded as one of the finest albums of the greatest tenor player of his generation. Well, OK, Sonny Rollins and Stan Getz.

But Trane! He was a trip man. I just caught him once at The Jazz Workshop in Boston. Not long after he died of everything July 17, 1967. Cripes that was fifty years ago during the Summer of Love.  Like so many of our greatest artists there was nothing left in the tank when he checked.

That album, so full of poignant suffering and hope came from when he found religion and was trying to come clean. You still can't hear that music without being moved to tears.

Those are big shoes to fill but the dudes at Pillow made me conjure Trane. This was particularly true of a brave and awesome sax player Irvin Pierce who went beyond a simulacrum of the sound to capture the heart and soul of the music. I could hear that sound night and day for what's left of my raggedy ann life. There was also a fierce combo of pianist Matthew Clark evoking the percussive McCoy Tyner,  the phenomenal and inventive Takashi Seo doubling for Trane's bass players Jimmy Garrison and Paul Chambers. Drummer Isaiah covered the sticks of Elvin Jones.

Until Pillow I never thought I would hear and be moved by that music again.

What an inspiration it proved to be for Taylor, a lanky, Ray Bolger scarecrow, Ian Berg, and the women Donetta Jackson and Starinah Dixon.

Quite literally, solo and as an ensemble, they danced till they dropped. The set ended with them dead on the floor soaked to the skin and gasping for breath. They gave us everything they had and then some.

But they sprung back for encores with the entire ensemble. It doesn't get much better.