She Loves Me at Williamstown Theatre Festival 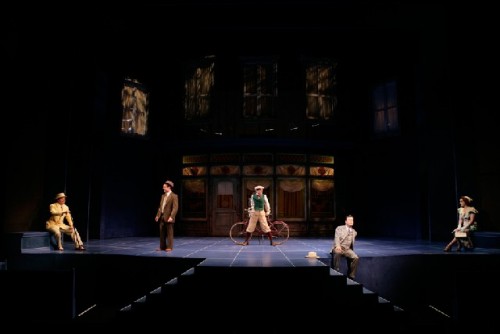 The play is set in a 1930s Budapest cosmetics shop. WTF photos by T. Charles Erickson. 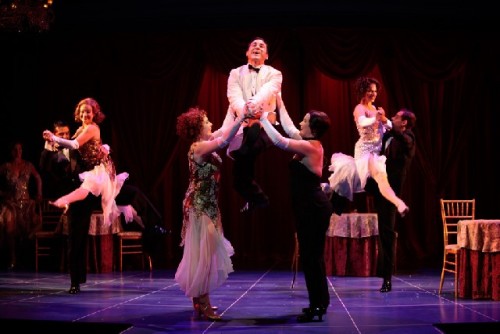 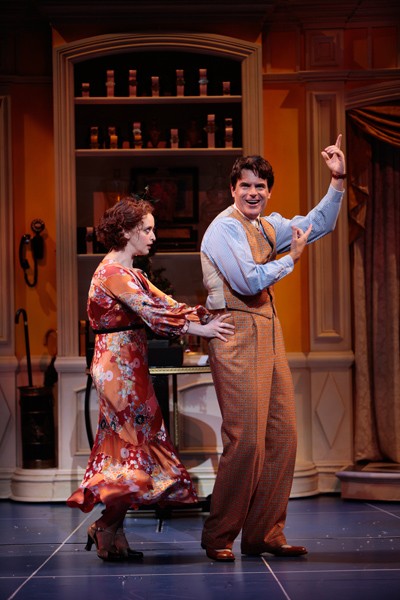 The womanizing Mr. Kodaly seducing the needy and vulerable Ilona. 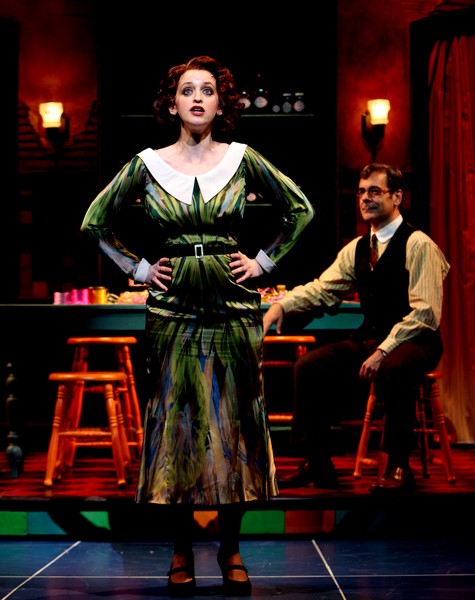 Ilona has her moment. 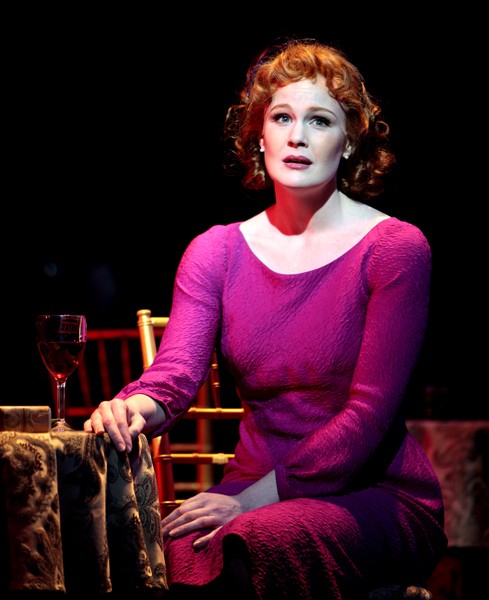 Amalia is looking for love. 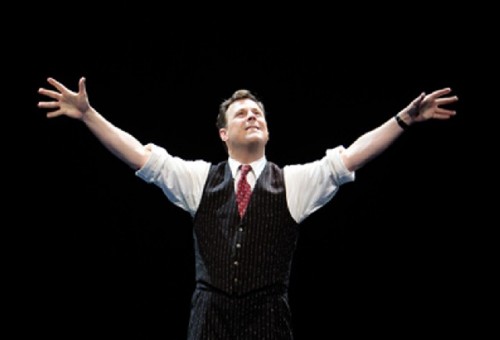 George belting out She Loves Me.

Kicking off the official Summer Season, on the Fourth of July, there are real fireworks on stage with "She Loves Me" which opened last night  on the Main Stage of the Williamstown Theatre Festival. For those who love musicals there is lots of sizzle and pop in a cult classic given a marvelous revival by the new artistic director of the WTF, Nicholas Martin, who has moved all the incredible sets by  James Noone, from the Huntington Theatre Company in Boston. "She Loves Me" was his curtain call  at the Huntington after a distinguished tenure.

With this phenomenal production, featuring a dream cast of truly gifted players, the Williamstown Theatre Festival appears to be back on track. This season WTF strives to regain its position as one of the foremost American companies after several seasons of decline. The only issue with the two year appointment of Nicholas Martin, as artistic director, is that it is not long enough. Artistic Director is a demanding position and Martin will have to consider whether it is appropriate to step back to a lighter schedule near the end of a long and distinguished career. But coming to WTF, even for a relatively short term, assures that World Class Theater is restored to a company with a great tradition. Once again it appears that WTF tickets will be as tough to score as they used to be.

Actually "She Loves Me" is mostly froth. It is as light and airy as the bubbles in a frosty glass of champagne. But it takes a deft hand to mix such a light and heady concoction. Here we really appreciate Martin's masterful touch.  The score is perfectly conducted by Music Director, Charlie Alterman. The singing and choreography can at times be quite frenetic and giddy. There are actors cavorting and flying all over the stage in moments of mind boggling mayhem. For this credit the superb choreography of Denis Jones. It is a wonder that they don't crash into each other. The costumes of Robert Morgan are richly colorful and occasionally hilarious. While the dresses of the women are adequate, Morgan has great fun with the smarmy womanizer, Steve Kodaly (Troy Britton Johnson). He has him looking, of all things, like a 1930s Budapest fop and gigolo. In ensemble scenes, when last minute Christman shoppers are flooding into the perfume and cosmetics shop which is the setting for the musical, there are plays of colors and textures of the purple shades of overcoats with fur collars.

What is most remarkable about this production is how stunning it looks. This is the best and most fluid set we have seen in the Berkshires in recent years. It tops Noone's  design, last year, for another WTF/ Martin production "The Corn Is Green."  But the sets and designs are so richly complex that one wonders how WTF will be able to afford and execute such standards during a grueling season. There is a new Main Stage production every two weeks. Martin has set the bar rather high and it will be a challenge to maintain such elevated expectations. The ambiance will be quite different for the next play on the schedule Anton Chekhov's tragic comedy "Three Sisters" directed by Michael Greif.

The plot of "She Loves Me" is a bit of fluff as is more often than not the case with musicals other than those by Stephen Sondheim. It is set in a upscale Budapest perfume shop in the 1930s and focuses on the staff of clerks who answer to Mr. Maraczek wonderfully played by Dick Latessa. The elderly actor is amazingly light on his feet and rich in voice. He offers flashes of when he must have been quite the hoofer and stud. The shop owner wrongly thinks that his chief clerk, Georg Nowack (Brooks Ashmanskas) is cuckolding him. This leads him to giving Nowack a hard time eventually forcing his resignation.

Into the shop appears a pretty young girl, Amalia Balash (Kate Baldwin), who is told to leave when she applies for a job. But rather cleverly, with her first witty solo "No More Candy" she sells a new item, a musical cigarette box, to a young woman as a candy box. Her sales pitch is that when the woman, who is a bit chunky, opens the box for a bon bon the music, in a Pavlovian sense, will signify, no, no, no.

By making this sale not only does Amalia demonstrate her skills but also wins a bet for the boss who has forced a wager on Georg. Mr. Maraczek has bet that the new item will be sold within an hour. Georg is chagrined at the success of Amalia and this gets them off to a bad start. She is hired which begins the tension between the couple. They can't stand each other. But, as the plot thickens, itt appears they have been exchanging plaintive, lonely hearts letters. After the appropriate twists and turns they find true love in each other's arms.

There are a number of terrific minor roles and players. The delivery boy Arpad Laszlo (Jeremy Beck) who aspires to grow up, wear long pants, grow a moustache, and take his place in the shop as a clerk, is outstanding. He flies about the stage with athletic leaps and swoops. There are  tender moments between Arpad and the boss who ends up in a hospital after a self inflicted wound. It seems that a detective reveals to him that  it is the smarmy clerk Kodaly who has boffed his wife and not his loyal clerk, George. This heightens remorse as Mr. Maraczek forced the resignation of the wrong man and now begs George to come back to the shop.

The secondary roles of Ladislav Sipos (Mark Nelson) the meek clerk and confidant of Georg, and Ilona Ritter (Jessica Stone), the lonely bimbo toyed with by Kodaly, are both performed quite nicely. There are some stunning duets between Ilona and Amalia sharing their love conundrums.

But this outstanding production truly belongs to an inspired pairing of Brooks Ashmankas and Kate Baldwin. We last saw Ashmankas as a supporting role with Victor Garber at the Huntington in "Present Laughter." That performance provided just a glimpse of his range. Here as the star of "She Loves Me" Ashmankas is showcased as an astonishingly gifted comic actor. He has the ability to use his entire body, which is rather larger than it might be, but remarkably fluid and expressive, to convey every nuance of mood and emotion. While not a great singer he can sell a song. Ashmanskas is hardly the classic romantic lead but he conveys  this lonely but smitten character quite convincinbly. The fact that he is middle aged and not that handsome only heightens the comic potential. He brought down the house with a galvanic rendering of the title song "She Loves Me." Even he seemed surprised by the outburst of applause from the astonished audience on opening night.

The perennial issue of musicals is the balance between voice, dance and acting. It is usual to have the performers more gifted in one aspect than the other. In this respect Kate Baldwin is certainly the real deal. She has it all.  Not only is she quite beautiful and expressive but her voice sends chills up the spine as she reaches back to belt out a song. Just one quibble, I hope they do something with her pretty red hair which seemed like she had hat head or just woke up.

Oh well, there I go being a critic. But bottom line folks act now to get tickets. You don't want to miss out on this rare and stunning production. It will surely evoke smiles on a summer night.