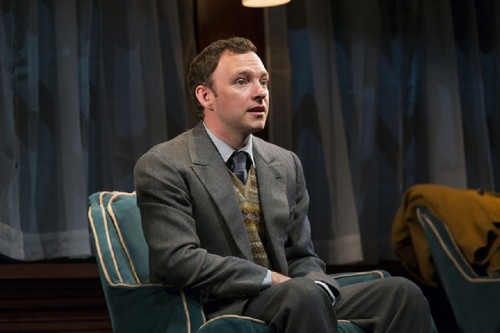 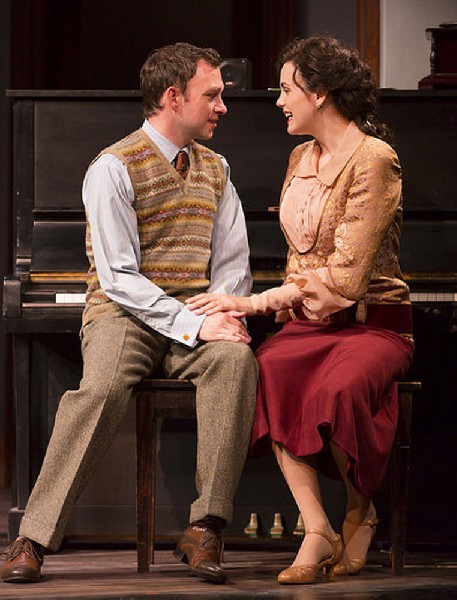 Fred met the genial and innocent Edna (Raphel Napoleon) on the train to the city. 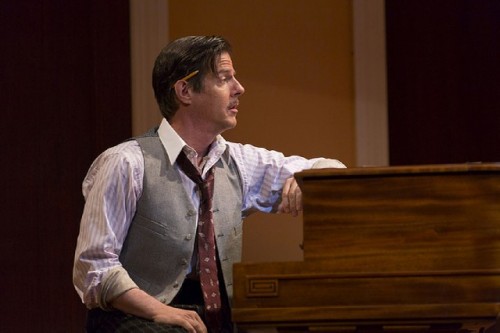 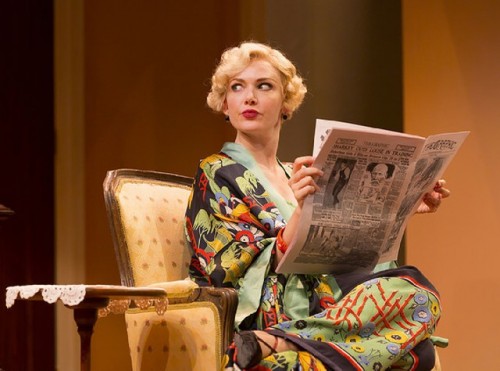 The scheming Ellen (Jolley Fain) is bilking Fred of his life savings and royalties. 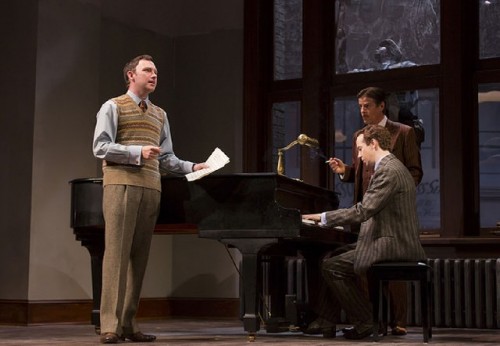 Working on a song. 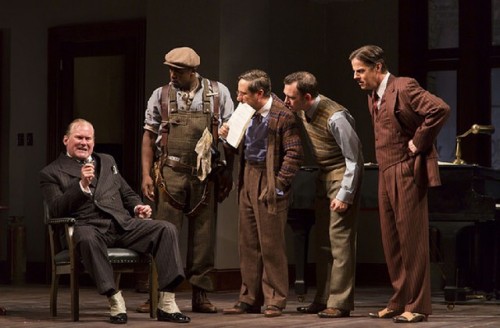 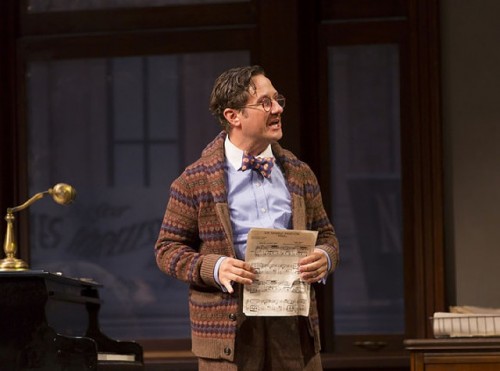 The hilarious Christopher Fitzgerald as Benny.

Thank God for the second act. It was a doozie.

This is a lavish production of the vintage, 1929 comedy June Moon by Ring Lardner and George S. Kaufman launching the Williamstown Theatre Festival season last night on its Main Stage. On a superb set of a music publishing office on Tin Pan Alley, designed by Tobin Ost, there were, count them, 27 actors chiming in on a final chorus of the title song.

The idea for the hit tune occurred to aspiring lyricist Fred Stevens (Nate Corddry) in the parlor car of a train taking him from a former job at GE in Schenectady to a new career in New York. The phrase popped up and was expanded upon in conversation with a midinette, Edna Baker (Rachael Napoleon), the kind of nice girl that good guys like Fred are supposed to marry. There are plans for him to drop by and see her at the dentist’s office where she works.

It seems the dentist hit on her during the job interview. When she rebuffed his advances he revealed that it was a test. Since then he’s been a perfect gentleman except once or twice.

Together they will explore the sights in New York City from the Statue of Liberty to Grant’s Tomb, Central Park and the Bronx Zoo. Gee kids, what fun.

On the train it seemed that Corddry was stumbling over his lines. Words weren’t coming out right. Apparently they were malapropos which we eventually caught on to with increased comic impact.

Once in the city the hick Fred connects with a slick composer Paul Sears his predatory wife, Lucille Sears (Kate Maccluggage) and her gold digging sister Eileen Fletcher (Holley Fain). Fred is thrilled to hook up with the famous composer of the hit “Paprika” which, as it turns out, was a long time ago. Since then the creative well and back account have run dry.

There is a lot of enervating plot exposition which is corny and terribly dated. The first act is predictable and seemingly interminable.

When they discover that the eager rookie has coin in his pockets, life savings to stake a start in the big city, they offer to show him the town at his expense. They latch on and milk him dry. Meanwhile what happened to that nice girl from the train? After a few tourist dates he makes excuses that he has to work all night.

During intermission I was not eager to return for more of the same.

From the get go, however, the second act popped. The heart and soul of the play made sense as we found ourselves in the belly of the beast dubbed Tin Pan Alley.

In a vast period office composers and lyricists were banging away at cheap upright pianos. Like the Gershwins and Irving Berlin they are looking to grab the brass ring to fame and fortune. It’s all about pitching tunes to the music publisher, a tycoon, signified by his spiffy spats, Mr. Hart (Timothy Shew). Or is it Mr. Heartless?

The office offers a nice range of cameos of the music business. There are some wonderful performances by supporting players. Maxie (David Turner) is a terrific pianist who can compose on the spot and play just about anything. He also has concerns for Fred who is being taken to the cleaners by Eileen. She is now the fiancé of the hapless Fred.

The fabulously gifted and hilarious Christopher Fitzgerald has a wonderful cameo as composer and lyricist Benny Fox. He is always trying to nab someone to listen to his outrageously corny tunes. One implausibly is about a long distance lover’s call to ”Tokyo.” With off the script improv and physical comedy every chance he gets Fitzgerald steals the show. We just can’t get enough of this amazing actor.

With beginner’s luck Fred’s collaboration with Paul turns into a hit. Mr. Hart cuts an advance on royalties for $250. It’s nabbed by the wicked and scheming Eileen as the foursome heads out for yet another celebration at his expense.

Even way back in 1929 we wonder how Fred could be so stupid.

As Eileen bilks him of royalty checks and presses him to ask for more advances she spends up to $400 a day on clothes. She needs a trousseau for their wedding trip, by steamship, to Europe. In Paris, of course, she will shop. Fashionable women, it seems, shop to buy clothes to shop. For a few hugs and kisses guys pay the bills.

"Don't you want to be proud of how I look" she purrs. How many rubes have heard that line.

The costumes by Gregg Barnes are suitably lavish, glamorous and expensive looking. The women have just the right period wigs by Charles G. Lapointe.

Keeping the girls in threads costs Fred a bundle. Eileen "treats" her sister to a frock suitable to meet her lover. He’s just hemorrhaging cash.

While likely not intended by Lardner and Kaufman the play is an analogy for the Roaring Twenties and the era of The Jazz Age, speakeasies and bathtub gin. June Moon opened on Broadway on 9 October, 1929 and just a short time later, 24 October, the bubble burst and Wall Street Laid an Egg. Despite the crash that ushered in the Great Depression the show had 273 performances on Broadway followed by a successful road tour.

Vincent Lawrence, Joseph L. Mankiewicz, and Keene Thompson adapted the play for a 1931 film directed by A. Edward Sutherland. The cast included Jack Oakie as Fred, Frances Dee as Edna, Ernest Wood as Paul, and June MacCloy as Eileen.

There have been regular revivals over the years. Mostly we presume for that crackerjack second act.

That’s when the razor sharp direction of Jessica Stone really took off. By then the malapropos and fast pace of hectic life on Tin Pan Alley clicked. There were all the right reversals as the plotting and scheming sisters got taken down and true love prevailed.

Yeah June Moon is mostly a straw hat, moldy fig but the WTF production managed to pull it off. Still I wonder why this chestnut was selected to launch the season. Perhaps, like last season's opener Kaufman's musical Animal Crackers it was anticipated as a sure thing and another hit. Well, not exactly.