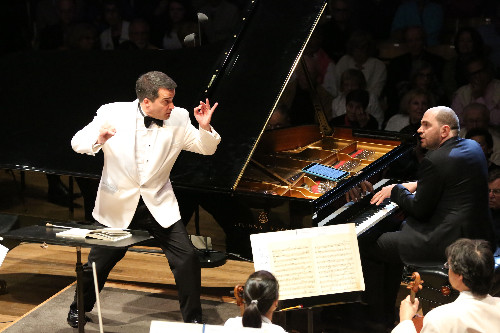 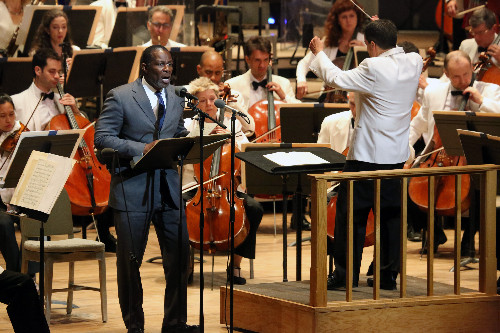 The All-American program for opening night of the BSO/ Tanglewood season, conducted by Jacques Lacombe, reflected the importance of jazz at the heart of a confluence with classical music.

During the annual Fourth of July celebrations we honor the efforts of the founding fathers but also note that we are yet to realize that we are a nation of all men created equal.

Both the triumph and tragedy of our American heritage is the African American legacy which is still under attack through lingering and impossible to extinguish racism in our nation.

This is all too evident in the killing of unarmed black youth by aggressive cops as well as the slaughter of parishioners in a historic house of worship. Only now is the logic of taking down Confederate flags coming to a head.

The Tanglewood program vividly displayed the triumph of black heritage as an influence in our culture. The “Lincoln Portrait” by Copland sampled the folk music of the Civil War era as a setting for the spoken word extracted from the texts of President Abraham Lincoln. He was a martyr for the cause of freedom and the reuniting of a divided nation.

Opening the program, with the composer present, was John Harbison’s brief but spirited “Remembering Gatsby” (Foxtrot for Orchestra). The conductor was indeed dancing as he inspired the orchestra in evoking the music that inspired the Roaring Twenties. The piece was a fragment of a larger but seemingly now abandoned project based on the seminal F. Scott Fitzgerald novel.

The best known and most enduring work by George Gershwin was a collaboration with his brother Ira to create the negro themed opera "Porgy and Bess." His orchestral work "Rhapsody in Blue" was first performed by the ersatz jazz band of Paul Whiteman which for a time featured the progressive trumpet player Bix Beiderbecke. In the piano solo of Beiderbecke's “In a Mist” the jazz artist evoked Ravel.

There have been many cross pollinations between European composers and American jazz. Igor Stavinsky wrote “The Ebony Concerto” for the progressive, bop era Woody Herman band. As early as 1910, ragtime pianist and composer, Scott Joplin, created the rarely performed opera "Treemonisha."

One felt a lot of jazz style in the galvanic performance of the stridently powerful playing of soloist Kirill Gerstein in Gershwin's  “Piano Concerto in F.” The work premiered at Carnegie Hall in 1925 with the composer at the piano. It received mixed reviews and only after Gershwin’s death, at the age of 39 in 1937, has it become widely performed and recorded.

Initially, opera star Jessye Norman was to perform the spoken passages of the Copland piece. There was a last minute substitution of renowned Shakespearian actor John Douglas Thompson. It was thrilling to hear him backed by the BSO and reaching out to the enormous Tanglewood audience.

Those who follow theatre in the Berkshires know him well for his performances at Shakespeare & Company. He has been widely acknowledged as one of the finest theatrical artists of his generation. Later this season he will star in “Red Velvet” at S&Co. It is one of the most anticipated Berkshire productions of the summer.

When it came time to speak the conductor pointed to Thompson. The words of Lincoln were delivered in his familiar, raspy, remarkably clear and distinct style. The words resonated in the hearts and minds of the audience.

The final selection Duke Ellington’s “Harlem” (arranged by Luther Henderson) answered the question of can the BSO swing.

One of Duke’s often quoted compositions states that “It Don’t Mean a Thing if It Ain’t Got that Swing.”

Last night the answer was a resounding yes.

It was thrilling to hear the familiar, ambitious Ellington composition expanded in symphonic form. One inevitably compared the BSO players to the great Ellington musicians. The BSO cats channeled the clarinet of Jimmy Hamilton, also sax of Johnny Hodges, baritone sax of Harry Carney and the entire percussion section kicked ass like the legendary Sonny Greer. More than a drummer Greer was indeed a percussionist exploring many of the instruments of a symphony orchestra.

During the era of the big bands Ellington was unique in expanding his writing to extended compositions. There were many such efforts including “Tone Parallel to Harlem” “Black Brown and Beige” “Liberian Suite” “Such Sweet Thunder’ (inspired by Shakespeare) and variations on classical music “Peer Gynt Suite” and “The Nutcracker” to mention but a few.

We departed from a wonderful evening at Tanglewood with the feeling that indeed you can have it both ways; conflating jazzy classical and classical jazz. It was a great program that gave us the best of both worlds.