Things That Go Bump on a Summer's Eve 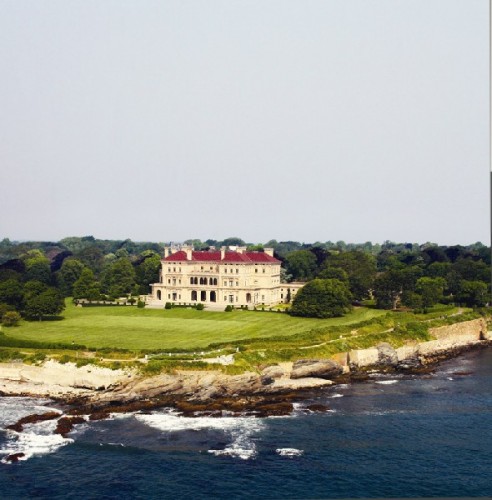 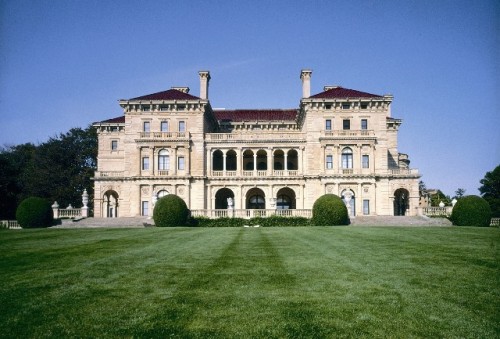 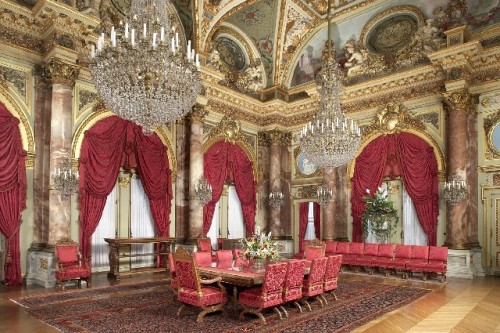 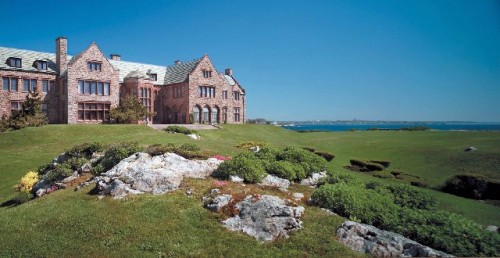 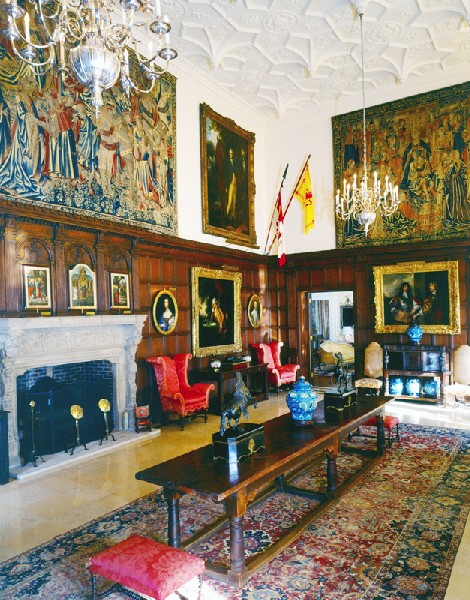 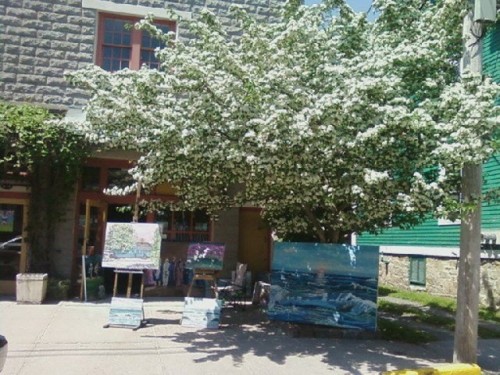 The Lady Who Paints Gallery and Studio Gallery Garden Shot

Newport, Rhode Island, known primarily for its Jazz Festival – this year it takes place August 5, 6, and 7 – and its Gilded Age turn of the century mansions, some of the most awesome ones overlooking the Atlantic Ocean, is filled to the brim with hidden and not so hidden treasures.

To say this small enclave of some 26,000 year round folk – in the summer it swells threefold - is an embarrassment of riches is a gross understatement. For around every corner, lay an astonishing array of surprises, many of mesmerizing proportions.

On a recent two night, three-day, trip to Newport, I dined and wined, well, actually vodka is my preference, and toured some of the city’s finest art and architectural wonders. First off the bat, after checking into The Clarkeston, sister to the Cleveland House, another fabulous B & B – Yes, I’d gladly stay there again - taking my father’s sage advice “See everything in one fell swoop. Get the lay of the land and then return to those places you want to see in depth,” I hopped on the Viking Tour’s Trolley for a guided tour of the city. For ninety minutes, we were treated to an awesome, eye-popping, historical laden, Newport 101 extravaganza.

While The Breakers, Hunt’s last work and built in 1893-95, is over the top in its royal grandeur– the main hall is fifty by fifty by fifty feet, and a John La Farge (1835-1910) stained glass skylight hovers over the grand staircase – Rough Point, filled with French Furniture, Chinese porcelain, Turkish carpets, and paintings by Gainsborough, Van Dyck, and Renoir, all collected by the tobacco heiress herself, has a homey lived in feeling.

So personal were her taste buds that one almost expects Duke to come waltzing into the room. For those that are interested in what Duke wore, on view through November 5, is The Sporty Style of Doris Duke exhibition which features a selection of Duke’s clothes, along with photographs of the lady surfing, swimming, playing golf and tennis, as well as scuba diving and bowling.

Another architectural oldie, Richard Morris Hunt’s first major commission in Newport, is The John N.A. Griswold House (1864), the main building of Newport Art Museum & Art Association’s three-building campus. It houses the museum’s permanent collection, as well as exhibitions, focusing on the work of Newport and southeastern New England artists, contemporary as well as 18th, 19th and 20th Century. Its walls, a lively walk through the history of American art, is populated with the paintings of Fitz Henry Lane, George Inness, William Trost Richards, John La Farge, and Gilbert Stuart. Also on view, are works by John Allen Twachtman (1882-1975), the son of John Henry Twachtman and Jane Stuart, Gilbert Stuart’s daughter (1812-88).

On the contemporary side, during my early June Visit, artists China Blue and Trent Burleson, were (and still are) having solo exhibitions. Burleson, with some 22 birds paintings, most all dated 2010, occupies the museum’s largest gallery room. Obviously the artist, a factory onto himself, is super prolific. His birds, many in full flight, diving for berries and vulnerable insects among beautifully rendered foliage, though reminiscent of Audubon, are post modern in their soft colored tones and slightly blurred execution. Looking at Burleson’s paintings, as Nancy Whipple Grinnell the museum’s curator states is as though we are viewing them “through a gossamer veil.” The last day of the Burleson exhibition is August 17

Firefly Projects, China Blue’s ‘fragility of life’ installation occupies a chamber-like gallery on the first floor. In a small darkened room, accompanied with twinkling blue lights, sound, robotics, and several electrifying photographs, Blue, reminding us of our childhood, wistfully brings us back to our early years of collecting fireflies in a jar. Commanding pride of place is two of the artist’s 7 ½ foot constructed trees on whose thin wooden branches perch flashing LED fireflies, each one faithfully timed to mimic their mating dance. Known internationally for her interest in the intersection of science, art and technology, in particular turning data into sound, the iconoclastic Blue has also recorded the vibrations emanating from the Eiffel Tower, as well as the sounds that permeate waters of the Venice canals, the latter by attaching scientific recording devices to the underside of a gondola.

The two biggest surprises - who knew such museums even existed – is the International Tennis Hall of Fame & Museum and the National Museum of American Illustration, the latter housed at Vernon Court (1898) a Beaux Arts adaptation of a 17th century French Chateau. The mansion, designed by Carrére & Hastings, architects for the New York City Public Library, the US Senate Office Building, and the Frick Collection in New York, features the work of the most illustrious illustration icons Norman Rockwell, Maxfield Parrish, NS Wyeth, JC Leyendecker, Charles Dana Gibson, and Howard Chandler. Sharing the spotlight through summer with Norman Rockwell’s America, an exhibition of 70 Rockwell paintings, another surprise, are writer Tom Wolfe’s humorous pen and ink illustrations from his book In Our Time, a compilation of essay’s originally printed in Harper’s Magazine during the “Me” generation of the 70’s.

The International Tennis Hall of Fame and Museum along with 13 manicured grass tennis courts, and 3 indoor ones, share the same spread as the recently renovated 1880 Stanford White Casino Theatre. Here Orson Wells, Helene Hayes, Lillian Gish, Will Rogers and Oscar Wilde tread the boards. How’s that for theatrical history? The museum itself, housed in the historic Newport Casino which was designed by McKim Mead & White in Victorian shingle-style, chronicles the history of tennis from the 12th century to the present in its 18 galleries.

It is stuffed to the gills with tennis related memorabilia, photographs, videos, art, fashion, trophies, and attire. Many pieces were donated by the game’s biggest stars. Gussy Moran’s once “scandalous” 1949 Wimbledon lace-trimmed tennis ensemble, and a Chris Evert portrait by Warhol – this guy is everywhere – are among the many one of a kind oddities. While I have yet to be completely sold on interactive anything – ugh! – I found the museum’s touchscreen kiosks which allow you to research, in text and in video, the world’s most famous tennis players, addictive.

The most serious museum quality gallery in Newport , some say in all of New England , is the William Vareika Fine Arts Gallery. I happened in on this little bit of heaven – think of it as a mini Metropolitan Museum or even a room or two at Boston’s Museum of Fine Arts – a little after the tail end of stunning John La Farge: In Paradise: The Painter and His Muse exhibition curated by William Vareika the gallery’s proprietor. Enough was still on the wall to send my head spinning. The gallery specializes, in purchase and sale, of 18th, 19th, and 20th century American paintings, watercolors, drawings and prints. They also handle the La Farge estate.

While my days were spent running with the big boys, on Newport Gallery Night which is held the second Thursday of every month from 5:30-8pm, I managed to get up close and personal, thanks to my guide du nuit Katie Dyer, the proprietress of Cadeaux de Monde (Gifts of the World). This is an eclectic, green, fair trade, international folk art gallery, with a few of Newport’s contemporary artists.

The tour started at Cadeaux with Nina Hope Pfanstiehl, a local jewelry and ceramic artist, demonstrating various jewelry wire wrapping techniques to an intense crowd of art and crafters. Catching my attention, as I examined the gallery’s wares, was Carrefoure at Adjame, was an exquisite city scene painting by Cote d’Ivoire painter Cloyery Georges. Also of interest was T.M. Dyer’s abstract pen and ink drawing which lined the walls of Galerie Escalier, a section of Cadeaux dedicated to New England artists.

Laura B. Fernandez’s stained glass fishes, Edward Fey’s paintings of ships, and Kathy Weber’s peopled beach scenes are showstoppers. Originally working in leather and creation of free form baskets, after taking a plein air workshop, Morris, a long time purveyor of antiques, dedicated herself – and quite successfully at that – to outdoor painting. Just recently Morris turned the top floor of the gallery building into The Borden House B no B, which means a soft queen size bed and breakfast at one of the many nearby eateries.

Didi Suydam Contemporary founded 12 years ago by artist Didi Suydam and her husband sculptor Peter Diepenbrock, features the work of fine artists and studio jewelry designers. The gallery, housed in an historic firehouse, is also a showcase for the work of this husband and wife team. While Suydam’s jewelry designs are elegantly displayed in the back of the gallery, it was her stunning black and white digital photographs up front that held my eye.

In Path 2006, an otherworldly photograph of storm clouds with a graphic T symbol place slightly left of center, the artist is attempting as she wrote to me, to “visually convey the metaphysical notion of alternate or coexistent, concurrent realities. The image and the presence of the symbol,” she adds, “may also be interpreted as a metaphor for the passage from the life experience to an afterlife experience.”

One of the most unique art-viewing spaces in Newport , aptly named, The Lady Who Paints Gallery, houses the studio and gallery of Rosemary Kavanagh O’Carroll. The space, part warehouse, part gallery, and a little bit salon, is dedicated solely to her own work, most of which is based on her life experiences. A consummate story teller, verbally and in paint, the very Irish O’Carroll – her reddish brown hair and freckles add to her charm – follows her passions wherever they take her. In Spain, O’Carroll descended into a cave below the Alhambra Palace in Granada.

“There were flamenco gypsy dancers in there and I was totally fascinated. The woman dancing was intense and raw. There weren't any windows in the cave, no air to breathe but it was the real thing.I pulled out my sketch book and started going to work” O’Carroll told us, “I took photos of her different movements and worked on the paintings in my studio back in America . To document the migrant workers in America , I flew down to Florida , rented a car and drove to Homestead , where the migrant workers toil in the field.” Both trips yielded a series of paintings. It being the last stop on our whirlwind tour allowed us to sit a chat a while. It was a lovely way to end the evening. This said, as much as I saw in Newport , it was only the tip of the iceberg. Hopefully I will get to return soon.

Below you will find the websites as well as the telephone numbers of The B & B that I stayed at, the room was large and airy, and the home cooked breakfasts scrumptious, the 3 restaurants I ate at – I had a different lobster dish at each one – and every museum and gallery venue that I visited.

While prices fluctuate season to season– summer is the high season – accommodations, eateries, as well as entertainments, can be found to fit every pocket from baked beans and beer to champagne, caviar, and a yacht in the harbor. Newport’s official website www.gonewport.com also has a wealth of information, from travel packages, special deals, and events, to where to stay, eat, shop, and things to do.