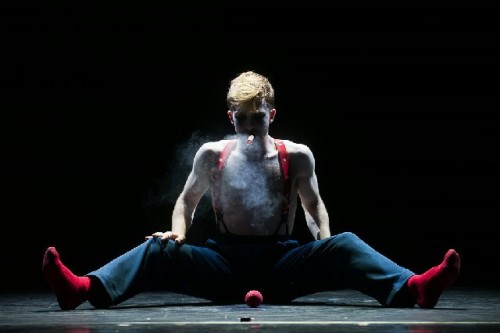 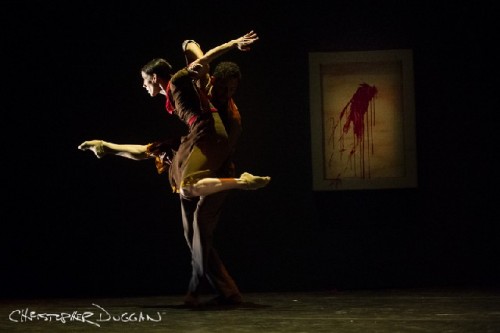 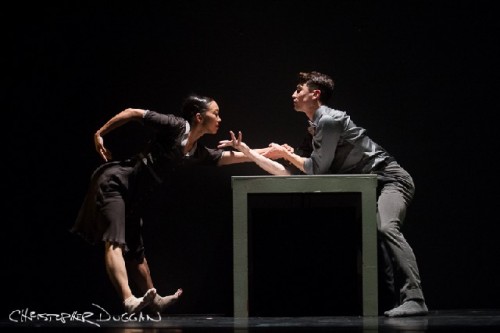 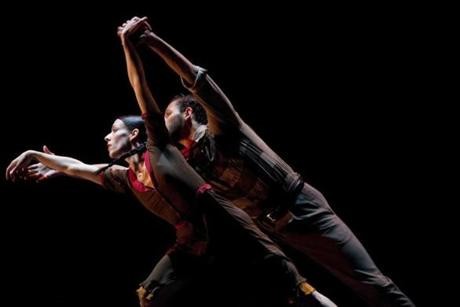 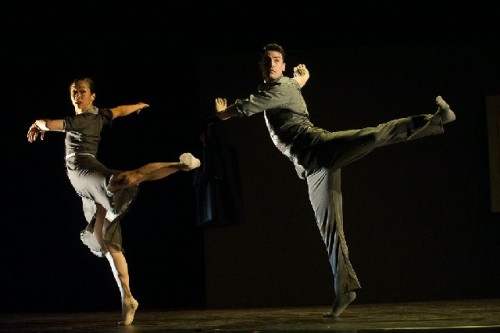 Unlike companies with a dominant artistic director and chorographer, Hubbard Street is known for a broad repertoire of commissioned works.

The program, in four parts with two intermissions, was eclectic with each piece evoking its own style and technique. While there were solos, pairs and trios, a sense of the ensemble prevailed rather than a spectacle of marquee dancers. All of the 18 dancers seemed somewhat interchangeable with different dancers performing the pieces during the run at Pillow. This was highlighted by a press kit insert of a number of substitutions for the Friday performance that we attended.

Given the marked difference of the four works it is difficult to identify a distinctive look or style for the company. Perhaps it is best to work back from what it is not. The approach is distinctly contemporary drawing on but not fixated on dance traditions and disciplines from classical ballet to jazz, African, European, and Latino approaches. Perhaps it is best to state all of the above and anything else that helps to enunciate the individual works which ranged from pure dance and movement to theatrical narrative with a bit of near nude male satire in the mix.

The evening which presented disciplined and refined dance was not notable for particular athleticism or stunning leaps. One experienced the dance as a whole with no fixation on  crowd thrilling elements. Accordingly, while enthusiastic the audience remained seated with no spontaneous Standing O’s. One might state that with relief as audience exuberance often outdistances discerning restraint which was more in play during an attentive evening.

Riveting focus was required to follow a range from pure dance to complex narratives. It is intuitive to want to read into the experience a quest for meaning. What is this dance about? In contemporary dance that may or may not be appropriate. With some companies, particularly the more abstract and avant-garde ones, often there is no there there. There are times when the dance and accompanying music are not meant to mesh. The dance can react to rather than work with the music, or in some cases, sound.

Which is why dance is one of the most challenging, and rewarding art forms to experience or, good grief, describe and write about. With classical ballet there was a story to tell from Swan Lake to the Nutcracker. As with theatre criticism, when in doubt, one may describe the plot. What happens, when, as is often the case with dance, there isn’t any? An attempt to deconstruct the experience may have little to do with the choreographer’s intentionality.

In the first work Gnawa (2005) choreographed by Nacho Durato for sixteen dancers, including a featured couple, we fixated on a soft bird sound that introduced a suite of three exotic musical selections; "Ma’Bud Allah’" by Hassan Hakmoun/ Adam Rudolph, “Carauari” by Juan Alberto Arteche and Javier Paxarino, and “Window” by Rabin Abou-KHalia, Velez, Kusur y Sarkissian.

The initial music with drumming and chanting evoked Indian music with the use of tabla or hand drums. Actually that was off by a continent. The music was North African and Moroccan which makes more sense with a Spanish choreographer.

With the bird sound the instinct was to set the dance in the jungle. There were elements that reinforced this as when the dancers linked with two sinuous, slithering lines that may have been serpents. As it developed there were ritual elements including the ensemble coming to the front of the stage and each placing there slotted vessels with flickering candle light.

There were groupings of the dancers at one point forming a dense circle and a pyramid structure with an elevated center. That yielded to a couple in flesh colored, nude evoking costumes. Other than exotica and wonderful, moody, global music the intention of the dance remains unclear although it’s aesthetic appeal was emphatic.

After an intermission, The Impossible, by Alejandro Cerrudo, combined more simplistic narrative dance with theatrical elements. The music is identified as by Various Artists which commenced with eerie, spooky sounds associated with mayhem and mystery. We were shocked first to encounter a roguish, impish dancer, shirtless with pants and bright suspenders matching red socks. He was smoking a cigar and having great fun with it including blowing smoke into the face of a hunched over woman concealing her identity.

When he departed she hung up her coat on the wall which served a number of purposes as the dance developed. We were surprised to see a hunched and stooped couple evoking old age and years of romance now devolved to support and companionship. It was a superannuated image that many in the audience readily identified with. They in turn were mirrored or supported by another similarly attired couple. Were they helping or perhaps shadows of the couple as their younger selves.

Other things happened. The woman shot the imp or did she? There was an indication of a wound to the framed image on the wall. Which was then pulled down to form a table with configurations on, around, under and even through with a door tunnel opening below.

If we wondered what that was all about, after another intermission, no worries with the outrageously hilarious, seven minute dance for three “nude” males Pacopepepluto (2011) choreographed by Alejandro Cerrudo. Absurdly, it was set to music by the late Rat Pack crooner and former Jerry Lewis straight man, Dean “Dino” Martin.

As a dancer streaked, cavorted, gamboled and pranced about the stage I couldn't quite believe what I was hearing. Mostly I don’t read the program prior to the performance.

Could that be, good grief, yes it was Dean Martin crooning those corny Vegas standards “In the Chapel in the Moonlight” “That’s Amore” and “Memories Are Made of This.”

Back in the day I had the pleasure of covering Martin in a sparsely attended performance in the cavernous old Boston Garden. The producer, who took a bath, totally miscalculated the appeal of a then faded Martin. My lead in the Herald review was “When the moon hits your eye like a biggah pizza pie that’s a Dean Martin.” It would have been a whole lot more fun with those three nudie dancers streaking across the stage.

Again we missed by a continent in the final work Falling Angels for an ensemble of eight women by JiÅ™í Kylián. The “African” drumming was in fact tightly composed percussion by the minimalist Steve Reich. In this abstract ensemble piece the women closely followed the beat of the music. There were variations of ensemble work with a single woman occasionally stepping forward but echoed by the others. The women lay strected out on the floor undulating in sequences that supported a soloist.  At times the dancers pulled on and stretched out the black leotards designed by Joke Visser.

Driving home from Pillow, as usual, Astrid and I engaged in a lively dialogue about a richly satisfying evening of dance. Mostly we struggled with the meaning of what we experienced.

There are times when we should just follow Susan Sontag’s thesis of Against Interpretation or zoom in on Talking Head’s sage advice to “Stop making sense.”

For all else there’s Master Card.