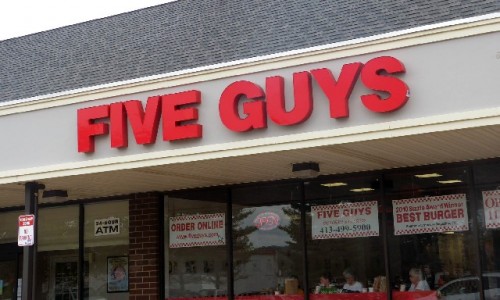 Five Guys in a Pittsfield mall. 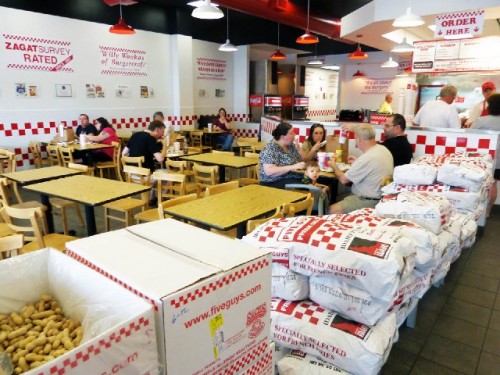 A fun themed interior design with sacks of potatoes and boxes of self serve free peanuts. 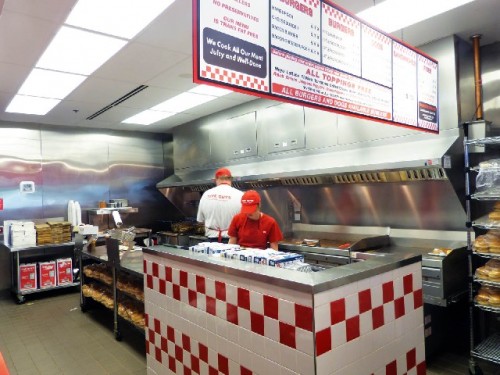 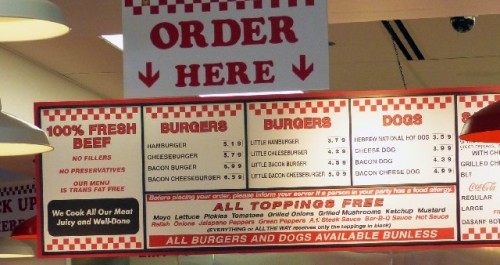 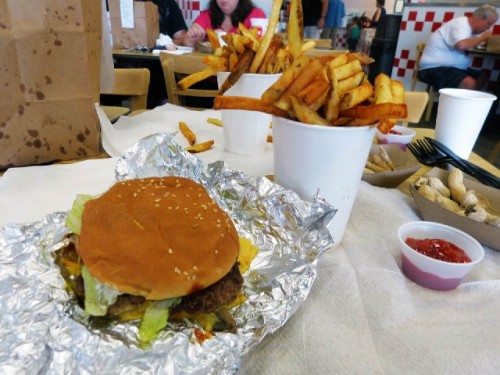 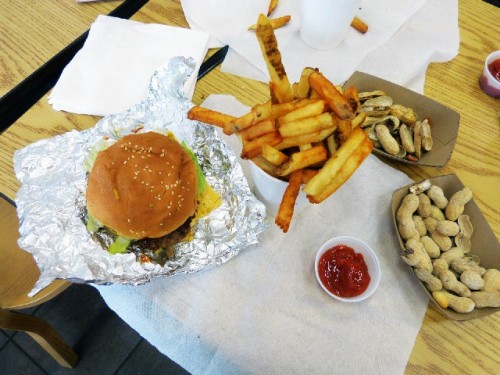 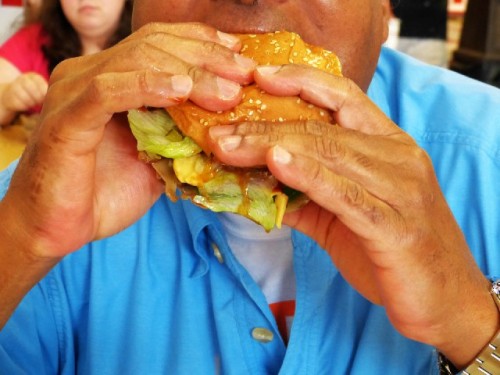 The Pit Bulls, like the Blues Brothers, are on a Mission from God to find the best burgers in the Berkshires.

Cisco was first dragged kicking and screaming into Five Guys, the local franchise of a popular chain, in a Pittsfield mall by his friend Roman.

We loved the fries.

The ambiance felt fun and retro with a too loud rock track booming through the joint.

The Pit Bulls discuss their visit.

Pancho The best burger I ever had was in a place in New York’s Soho now closed.

It’s not a frozen or pre-prepared paddy. It’s hand sculptured in the kitchen from freshly ground meat.

In the Berkshires the only place that had that was Aster’s. It closed and now that’s where Mazzeo’s is located. It was served as an entrée and the price was like that in any good restaurant. Around $12 to $13. The same thing in Soho some $13 to $14.

In this area I started to look for burgers. One place, no longer, was the Crowne Plaza Hotel in Pittsfield. Then that changed. It went down.

Right now the Berkshire burger which I appreciate is Freight Yard in North Adams. Their burgers are hand molded. Freight Yard is not a joke. It’s not a mass produced, pre frozen paddy.

These are the three best burgers in the Berkshires. We’ll have to check them out.

The first point is that the roll has to survive the meal.

At the better burger joints the bread will survive the meal. It stays firm and fresh till the last bite. It doesn’t break down into a soggy mess. The bread falling apart, almost melting, is no good for me.

A good burger has to have the stuff. Like mayo, ketchup, mustard, relish, barbecue sauce, lettuce, tomato, cheese. You have to have nice juicy meat. Then the botanicals, condiments and all that. The bread has to hold up until you’re finished.

Here at Five Guys I had to finish with a fork. I couldn’t pick it up. The meat was pre formed and delivered to their chain of stores. It’s franchise food.

When you’re at Freight Yard you can taste the quality of the meat.  Here you can’t.

For the price, it’s fine. They do well. This is my third time with them. The other two times were takeout. This time we sat in the restaurant. For you this is the second visit, right?

I give them an A on the French Fries. Top notch. They make sure that you know that they’re cut fresh by stacking them up on display.

They also give a range of free toppings. For that price, not bad.

Cisco With fries and no drinks it came to about $20. That’s about $10 each. Which, for fast food, is fairly high end.

C But they’re out of business.

P The size of the place and the cost of its ambiance was so much that they couldn’t recoup the investment.

C Have you been to Mazzeo’s?

P Yes. It’s a solid restaurant. At the new location I had the Steak Pizzaiola.

C We went recently and found it numbingly mediocre.  Mazzeo calls itself a ristorante but for me it’s a trattoria. What’s the difference?

P The ambiance. For that perhaps Mazzeo is more ristorante. For me trattoria is more family style which they were when they started.

C For me an overpriced trattoria is a so so ristorante. In Italy they don’t call themselves a ristorante unless they deliver superior food. Let’s get back to Four Guys. What is your overall rating?

P Out of ten maybe a 4. It doesn’t compute and it cannot compete. Compared to fast food franchises, however, a cut above. With the French fries I give them an overall 5.