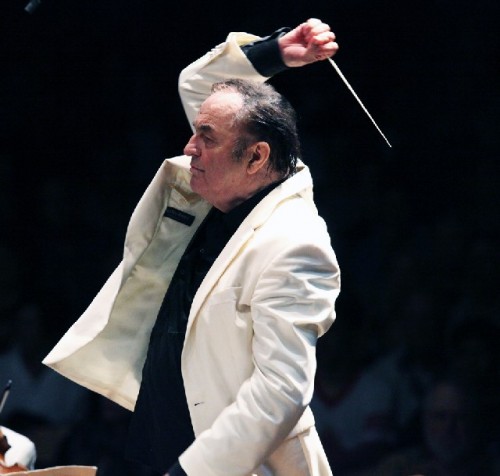 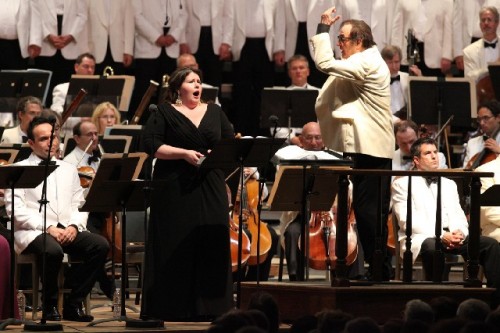 Soprano Angela Meade in a concert version of Bellini’s "Norma." 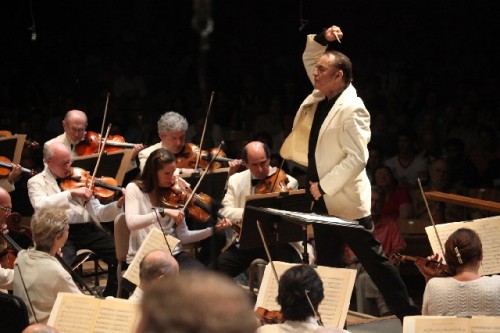 Dutoit mounted up to prance through Rossini’s Overture to "William Tell."

While the Koussevitzky Shed was packed to the rafters for the gala opening night of the 2011 season of the Tanglewood Music Festival on the lawn it was a washout.

There was a sharp contrast with the three, capacity, 18,000 person concerts last weekend of James Taylor and a well attended night of Garrison Keillor sandwiched in between.

While Charles Dutoit presided as the guest conductor for the official opening night, in reality, this is the third weekend of the season for concerts on the renowned Lenox campus.

It started three weeks ago with an appearance by the touring superannuated soul group Earth Wind and Fire. They drew a plethora of fans. That was followed by two sold out nights of the Mark Morris Dance Group in Ozawa Hall which also featured the scaled down James Taylor and Friends. In the Shed followed by JT with John Williams and Pops as well as two nights as the featured performer.

While we are reminded over and over again by Mark Volpe and the BSO’s powers that be, Tanglewood will always be the summer home of the Boston Symphony Orchestra, it seems that, well, the handwriting is on the wall. While Tanglewood has recently unveiled a bronze sculpture of its founder Sergei Koussevitzky perhaps it should also commission an effigy of Taylor who may well be its modern era savior.

Or is that Robin Hood?

Consider last night the lost revenue of a rainy night and an empty lawn.

Had it been a concert by JT, or the upcoming events with Steely Dan and Train, the hordes would have been out there hunkered down under umbrellas. As we were a couple of weeks back hearing Wilco at Mass MoCA in pouring rain. Fans bought their JT lawn tickets months ago.

While clearly, for classical nights at Tanglewood, patrons check the weather report before making  last minute decisions. In the current economy that seems to be pervasive with arts organizations in the Berkshires. The exceptions are  hit shows which are selling out. Like JT but on a smaller scale.

It is a prime indicator that audiences are becoming ultra selective with disposable income earmarked as entertainment dollars.

During the prequel to the official Tanglewood opening last night management made a lot of runs to the bank. By our rough head count, during the shoulder season, the BSO sold some 80,000 plus tickets representing, what is that, a few million dollars to front load the season?
So management needn’t have been concerned that the lawn, the cushion of revenue, was a bust last night. All that JT mad money has given them a buffer by financially front loading the season.

While the Shed was packed on a Friday night it has become evident that the opening nights of weekends are a tough sell. Many families commute from New York and Boston with Friday as a normal work day. So reaching Lenox for an 8:30 PM concert, with dinner in between, is problematic. It also makes them less inclined, after a long week, for heavy duty programming.

The concert last night was indicative of an experiment this year to lighten up on Friday nights saving the Beethoven and Mahler for Saturday night.

The evening opened with a risk factor the Overture and Act 1, scene 1 from the Bellini opera “Norma.” Bear in mind that the program was selected by Music Director, James Levine who doubles as Music Director of the Metropolitan Opera. He has executed a mandate to present more concert versions of opera at Tanglewood with at best mixed results. Levine, through health issues, is not with the orchestra this summer but, with guest conductors, his schedule remains intact.

Truly, Dutoit offered a lush and sensual rendering of the music evoking rich nuances from the orchestra to match the superb singing of the powerful Angela Meade, soprano, as Norma, Kristin Jepson, mezzo-soprano, as Adalgisa, tenor Roberto de Biasio as Pollione, and Matthew DiBattista, tenor, as Flavio, with bass-baritone as Oroveso. John  Olver conducted the enormous Tanglewood Festival Chorus.

The audience listened attentively. But it is fair to speculate that only an increment were familiar with the opera. This is becoming less true because of the immense popularity of the Live in HD broadcasts from the Met which are reaching enormous global audiences. It is having a significant impact in broadening the appeal of opera with growth in potential audiences. But there is still a challenge and learning curve particularly for concert versions without the full production values of even a Live in HD viewing of a Met performance.

After an intermission, with an indicator of future trends, Dutoit literally pranced through a rousing rendering of the Overture to “William Tell” by Rossini. For many of us older folks in the audience it was a thrilling return to yesteryear with the theme music to “The Lone Ranger.” I had to restrain myself from yelling “Hi Ho Silver.”

What fun. The audience loved it.

Back to more serious notes that was followed by a trio from an obscure early work “I Lombardi” by Giuseppe Verdi. Compared to “Norma” it was relatively brief. And thoroughly delightful.

The evening closed with the ever popular audience favorite, the richly descriptive and pleasant “The Pines of Rome” by Respighi. We left with smiles on our faces. Get em up Scout as we galloped into Lenox traffic.

Tonight there is a notable shift in the Ting Tsung Chao Memorial Concert. In one of the most anticipated programs of the season Dutoit will conduct the exquisite Berlioz “Requiem, Opus 5” with the Tanglewood Festival Chorus and soloist, the tenor Russell Thomas.

The Sunday concert at 2:30 PM will be conducted by Miguel Harth-Bedova with Higdon’s “Loco” Bruch’s  “Fantasia on Scottish folk melodies for violin, with orchestra and harp, Opus 46” and, after intermission, Tchaikovsky’s ever popular “Symphony No. 6 in B minor, Opus 74,” known as “Pathetique.”

The weather is forecasted as clear and sunny for the remainder of the weekend. So pack a picnic basket, grab the folding chairs, chill the Chardonnay and head for the lawn.

Indeed, there is nothing quite like the Tanglewood experience.