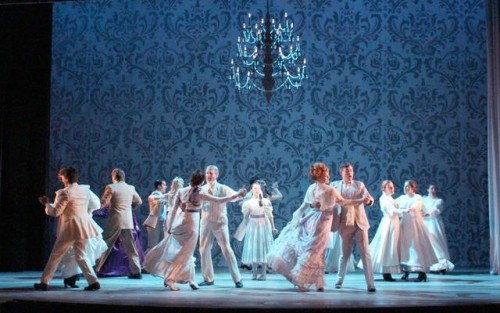 The cast set to a waltz. Courtesy photos. 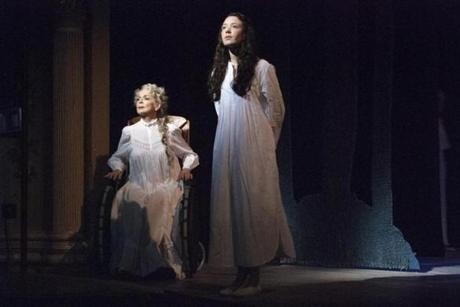 Looking for the smiles of a summer night. 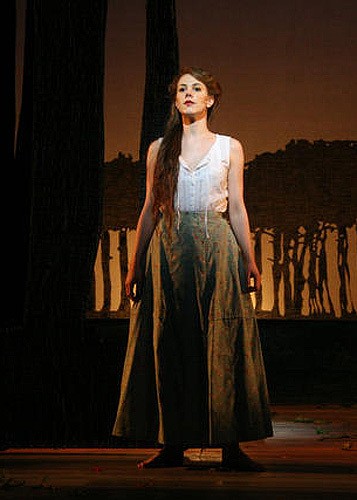 For its now annual musical at the Colonial Theatre A Little Night Music by Stephen Sondheim and Hugh Wheeler, for the most part, raises the bar for Berkshire Theatre Group.

This production soars on a stellar cast with phenomenal voices, complemented by a superb eleven piece orchestra conducted by Nathan Dame. There are stunning costumes by David Muri and adequate lighting by Oliver Wason.

Like Icarus, however, the production crashes back to earth because of the chintzy sets designed by Reid Thompson. The allusions of Midsummer in a land of Midnight sun are anything but ethereal and enchanting. Director Ethan Heard has those oh so fake trees shifting about and the manse itself raised and lowered in the worst possible, distracting, scenic pratfalls.

The staging is often, well, duh. Too frequently scenes are set in front to the red curtain. This is more appropriate to Noh knee plays or vaudeville than a sublime musical drama by the ever so nuanced Sondheim. In a dining scene during the “Weekend in the Country “previewed magnificently at the end of the first act we find actors with their backs to us. It is difficult to sort out just who is speaking.

Enduring the distractions we were enthralled by fine performances of Sondheim’s signature mix of richly complex characters and singers delivering difficult songs that illuminate human foibles. His deep insights of human nature are truly Shakesperian.

You have to listen intently to Sondheim’s songs. Particularly at the beginning of the first act, because of faulty sound mix, that was too challenging. Those issues evened out during the course of the evening with the exception of Anne (Phillipa Soo) the yet to be consummated bride and second wife of the middle aged Fredrik Egerman wonderfully played by Gregg Edelman. Soo, who proved to be shrill and unconvincing, was the weak link in an otherwise well balanced cast. We don't buy why Fredrik puts up with her virgin act.

For A Little Night Music Sondheim drew on a number of sources. Most closely it is adapted from Ingmar Berman’s enchanting and magical, 1955 film, Smiles of a Summer Night. I vividly recall that first encounter with Bergman as a teenager viewing it at the Brattle Theatre in Cambridge. Bergman, of course, was influenced by Shakespeare’s Midsummer Night’s Dream. For Sondheim add a dash of Mozart’s Eine kleine Nachtmusik. In this production its refrain is briefly whistled.

Indeed what happens on the shortest night of the year? As the wheelchair bound, former courtesan with that elegant house in the country, Madame Armfeldt (Penny Fuller), explains to her granddaughter Fredrika (Emma Foley) on this evening there are three smiles. “First, for the young who know nothing, second for the fools who know too little, and third for the old who know too much.”

The musical explores the folly of romance and farce of sex. There are elements of serious love between Fredrik and his former mistress the actress Desiree Armfeldt (Maureen O’Flynn). In the first act he takes his child bride to see her in the theatre. In a fit of jealous rage Anne, initially delighted to spend a night out, demands to be taken home.

There is a snarl of convoluted flirtations, romances and raw rooting.

Henrik, the seminarian son of Fredrik (Matt Dengler) is torn between love of God, fear of Hell, and lust for his teenaged mother-in-law. The bawdy maid, Petra (Monique Barbee), tears him away from the study of Luther for a bit of carnal knowledge.

In the years since they last embraced Desiree discloses to Frederick that her arms have not been empty. Her latest lover is the married, pea brained, swaggering, dashing, tall dark and handsome officer of the dragoons, Count Carl-Magnus Malcolm (Graham Rowat).

There is a farcical encounter of rivals in her bedroom. This is further exacerbated when with wives and servants they clash at the chateau of Desiree’s mother. That devolves into a challenge of Russian Roulette.

The arrogant Count previously asked Fredrik if he enjoyed dueling. A lawyer by profession, Fredrick does his sparring in court. Carl-Magnus relates that he has survived seven duels with wounds from five.

In the Bergman film we were seamlessly drawn through the intricacies of an evening of reversals and revelations for the characters. For this production you need a cheat sheet for all the twists and plot points.

When in doubt just let the wonderful music and intricate lyrics wash over you. There are fifteen songs or seventeen if you count a second act reprieve of “Send in the Clowns” and a finale.

All of the songs advance the plot and enrich the characters. Sondheim’s understanding of human nature has Shakespearian depth. Only one song, however, “Send in the Clowns” is included in the canon of Broadway standards. It has been Sondheim’s only hit entirely through Judy Collins.

The performance "Send in the Clowns" by opera star and Berkshire resident, Maureen O’Flynn, was galvanic. In context we fully absorbed its relevance to the drama and revelation of a woman of a certain age who has lost her touch. It occurs during an encounter with Fredrik who announces that he will remain with his young wife. She had hoped to reunite with him as the father of Fredrika. In the film the child is male and Fredrik.

It is shattering when she sings "Isn't it Rich? Isn't it queer? Losing my timing this late in my career." As a senior doesn't that moment come for all of us? We make jokes about our inevitable demise. Humor and clowns are the last resort for tragedy and loss. How incredibly poignant.

Conveniently that happens after a rather silly scene in which Anne and Henrik finally hook up, shag, and run off. Humiliated by her constant teasing he has been disrupted while comically trying to hang himself.

While the audience was riveted by the familiar and shattering “Send in the Clowns” there are many wonderful songs. The frustrations of Henrik are humorously articulated by his superb solo “Now.” We deeply identified with “Remember.” There was delicious irony when Fredrik sings “You Must Meet My Wife” to Desiree. Looking back on a career as a courtesan Penny Fuller was wonderfully wise and droll recalling “Liaisons.” Rowat is a terrific sexist scoundrel in “In Praise of Women.” As the lusty servant, Petra, Barbee delivers a show stopper “The Miller’s Son.” The end of the first act soars with the company delivering “A Weekend in the Country.”

The function of the chorus- Ashton Heyl, Denis Lambert, Jamilyn Manning-White, Patricia Noonan and Eric Van Tielen- is never clear. They weave in and around the narrative but whom exactly are they? The women wear Grecian classical white gowns which set them off from the elaborate dresses of the other players. Their male partners wear what seem like contemporary suits. Are they actors from Desiree’s company? There is no doubt however that they are wonderfully gifted singers well complementing the leading players.

Overall the cast was magnificent.

Kate Baldwin was particularly notable in the supporting role of the wife of the philandering Count Carl-Magnus. We really feel for her in a scheme to win back her husband through a charade of attempting to seduce Fredrik. There is a tete a tete plot hatched with Anne. But only Countess Charlotte is credible in this encounter.

Long after this season is over we will linger over O’Flynn's iconic rendering of Sondheim’s masterpiece “Send in the Clowns.” It is the kind of performance you never forget.

We are ecstatic that BTG brought the always challenging and insightful Sondheim to the Berkshires. For that award them two ears and the tail.