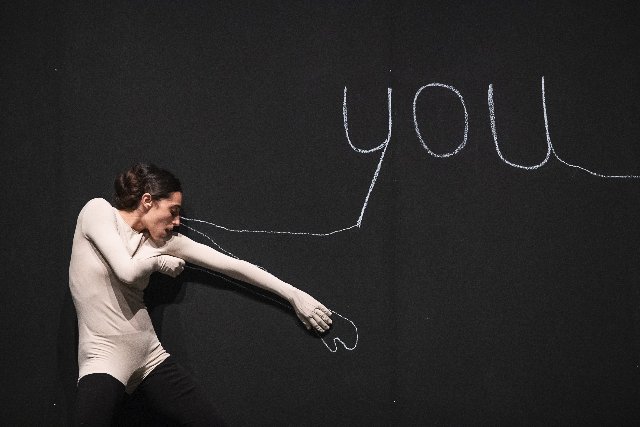 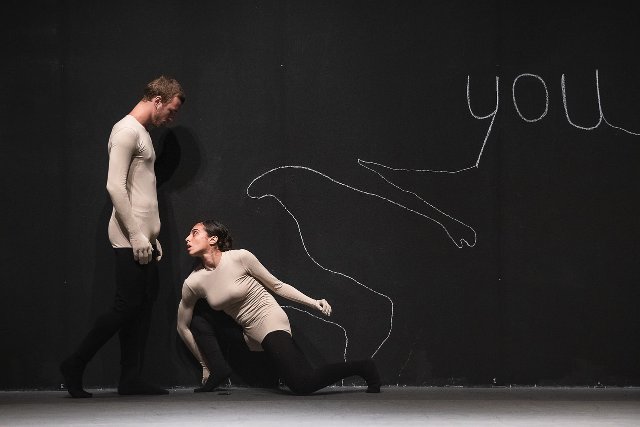 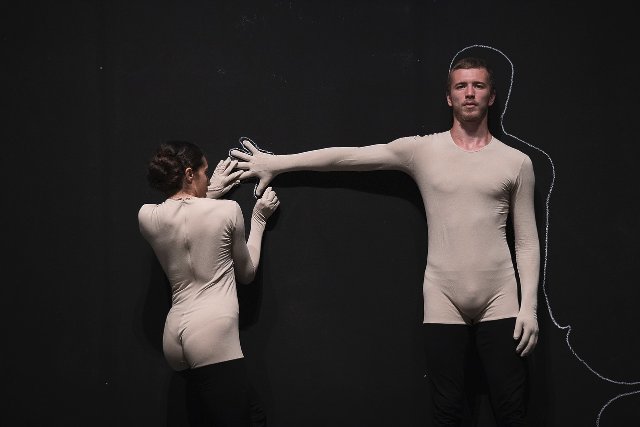 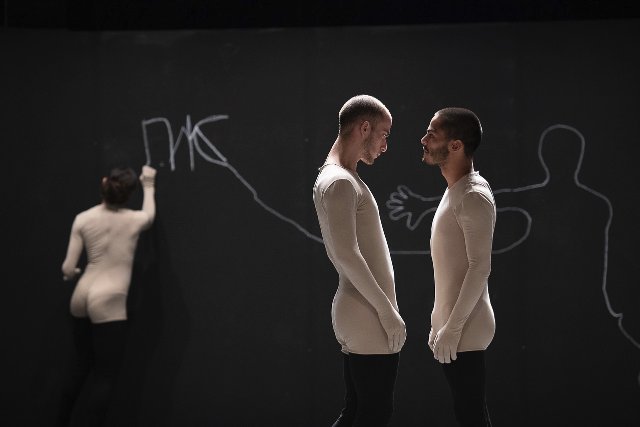 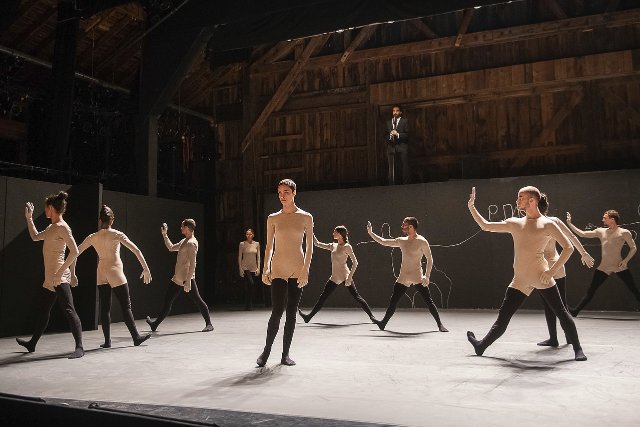 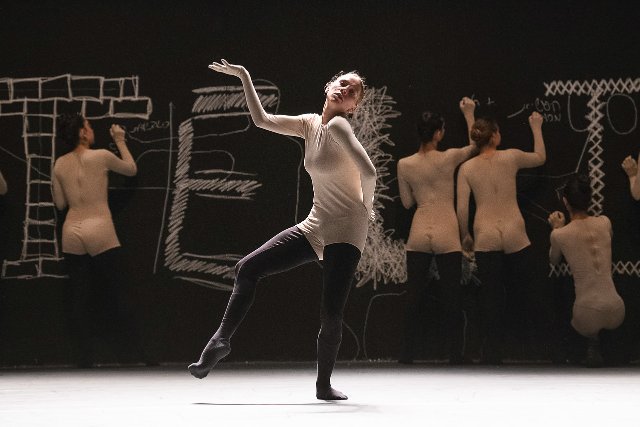 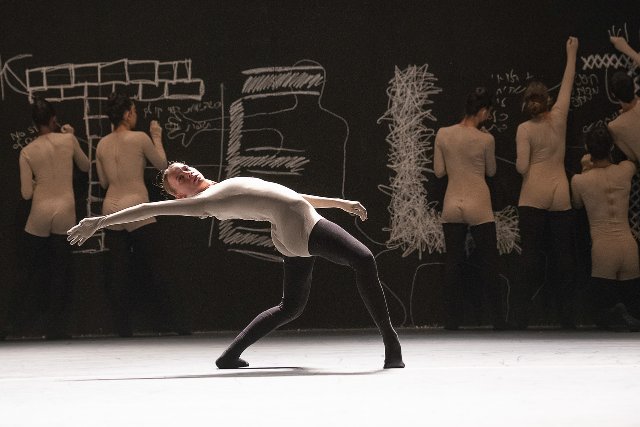 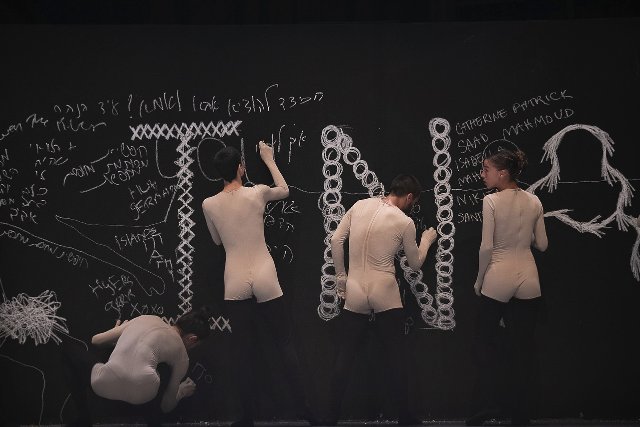 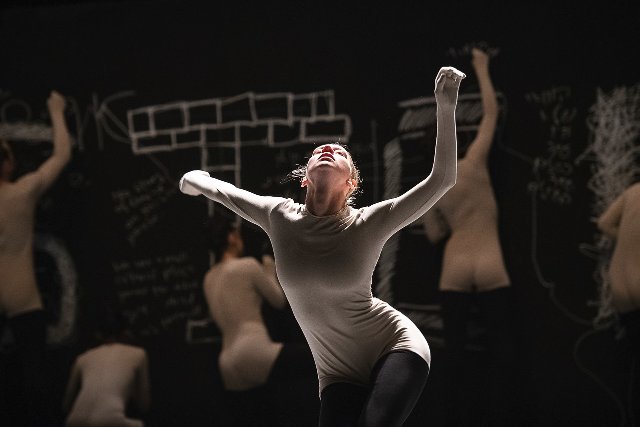 In 1964 Martha Graham helped Baroness Bethsabee de Rothschild to found an Israeli dance  company.  It reflected modernism and Graham’s influence but that changed when Ohad Naharin became artistic director in 1990. After initially working with Graham he went on to develop his own style and in particular the widely influential Gaga technique of liberation,  movement and self discovery.

Emerging dancers are given up to three years to develop the unique technique. The “adult” company is almost entirely comprised of dancers who have gone through that initial training.

Now in his final months as artistic director Naharin has taught Gaga all over the world to dancers and non dancers. That was a part of the company’s two week residence at Jacob’s Pillow in addition to performances of the complex, multi-valent, hour long piece “Naharin’s Virus” (2001).

In 1956, hosted by Ted Shawn, Baroness de Rothschild visited Jacob’s Pillow with Graham. The Bathsheva Dance Company made its Pillow debut in 1995 and returned in 2004. This was its first appearance with The Young Ensemble. A number of sponsors contributed to making this rare visit possible.

It is likely that those fortunate enough to have attended this provocative performance will never think of themselves or dance in quite the same way ever again. On many levels it was an assault on the senses and a challenge to the assumptions that we, as the audience, bring to the experience.

Based on “Offending the Audience” Peter Handke’s 1966 “anti-play” the piece ends with a long recitation of insults. During this the entire ensemble of 16 dancers shuffles about reflecting and augmenting the barrage of verbiage both generic and specific. We must sort what to deflect as not relevant to us individually, as well as, own what strikes home. When confronted the usual response it to proclaim innocence. Under the current circumstances there is no escape. To remain silent is complicit with crimes against humanity occuring here and globally on a daily basis.

We are further told how to respond in the usual ritual of applause including anticipated interactions as the densely packed audience funnels its way out of the theatre.

The audience did indeed applaud and slowly evolved into a ritual standing ovation. I refused to partake as I don’t take orders from strangers particularly when they come from the stage. That the audience missed this nuance was precisely the point of the piece. So, indeed, we are sheep manipulated by art led to slaughter.

After the performance I sat outside and waited for Astrid. A man joined me in the shade on a hot afternoon. I greeted him “Hey asshole are you a filthy capitalist?” He looked at me with some surprise then we began to discuss the piece. When his partner joined us I hurled a similar insult. Gamely he countered “Up yours you pussy grabber.” It seems that they had seen the piece in 2002 at BAM. He had participated, that morning, in the Gaga session. He described it as more about feeling his own body and its potential than a lesson in technique. It was wonderful to share the experience with strangers.

Prior to the performance there was a blowup stick figure on stage. It is the kind of frenetic object gyrating about to draw attention to a car dealership or other retailer. The movement is entirely random in response to forced air. As my new friend explained that seemingly chaotic movement was the essence of Gaga.

There were several disparate elements to “Naharin’s Virus.” Consider the title of the piece. The first word “Naharin’s” tells who created it. The second “Virus” implies that it is an infection or contagious disease. If you read and listen carefully to the drone like narrator there is an awareness that something is fucking with us. It will make us sick or more aware of a potential cure from endemic illness. We are led to that finale of insults hurled at us. By then we have been slowly conditioned to a full assault as diseased individuals in a sick society. Why, indeed, do we sit there and take it? What is the protocol and decorum of absorbing daily assaults? When is a more appropriate response outrage, protest and revolution? A more informed audience would stand and hurl insults back at the dancers.

That’s what happened in Paris during the first performance of Ubu Roi by Alfred Jarry on December 10, 1896. As was the case at Pillow the very first word of the play was “Merde” an insult. The audience responded violently. As was the case with the premiere of Stravinsky's Le Sacre du printemps (Rite of Spring) in 1913.

The meek response of a polite Berkshire audience was to applaud its tormentors. They will indeed inherit the earth. The piece left me enraged but utterly transformed.

A difference, perhaps, was that I processed the post structuralism and deconstructive strategy of  Handke’s conceptual play and its attack mode. Start with the notion of authorship and who own’s the piece. In his case the choreographer has confoundingly and perhaps misleadingly put his name to it. If, in theory, the work owns itself, then what is the relationship of the performers and their audience? What are the expectations and who is looking at whom? Is  commonality of breathing the same air and sharing the space enough to refer to both audience and dancers as we?

How indeed does one enter such a work? Where is the hook or connected thread, based on past experience and assumptions about dance/ theater, to navigate through the piece? The narrator squashes that in the manner of Sartre’s play Huis clos (No Exit).  It is most famous for the line “Hell is other people.” In what way are we trapped in the existential experience of life with the only exit through the gate of hell?

The narrator will have none of that. We are told that we are in a space with no doors either real or imagined. There is no way in or out and none of our assumptions/ expectations will be realized.

We are not certain of the reality/ identity of the narrator. He stands on a platform the length of the stage. Below is a blackboard on which silhouettes and a word in large block letters “Plasticine” is gradually written. It is an abstracted reference to Palestine which is particularly evocative for an Israeli audience. Arguably, less so in the Berkshires.

At one point the narrator steps back and out of the “suit.” We discover it has been a prop. The narrator, dressed like the others, climbs down and becomes a dancer. Now and then he steps back into the suit but we know the trick if not what it means.

The dance is as much about what it isn’t as what it appears to be. It is best approached with no knowledge or assumptions. The less you know about dance, or the more willing you are to suspend and forget, the more one may absorb and grope with this pernicious virus.

Deconstruction, insults and denial are familiar techniques for torture, indoctrination, misinformation, or tricks of cults and mind control gurus. It’s through systematic humiliation and abuse that recruits are  transformed into Marines. One must be reduced to nothing, deconstructed, before being built up, constructed, into something new, and stronger.

Initially, Naharin planned to use Klezmer music for the piece. After the company performed in a village in Israel they were entertained by traditional Arabic music with oud, stringed instruments, and percussion. He became determined to use this music as well as a mixed company of dancers. For this he has been applauded as a well as vilified. It reminded me of the performance of  music during the finale of The Band's Visit.

The Pillow sound system was cranked to the max as we heard an infectious blast of indigenous music. That lapsed into an eerie ambient tone. Ever so slowly a solo female traced her silhouette onto the blackboard. This seemed to last forever and made us dwell on the essence of time and anticipation. We craved relief and for something more to happen. She was eventually ambivalently joined by a male dancer. They gave little indication of their relationship or partnering. She traced his outline onto the blackboard.

Pairs of dancers appeared on stage with a sniffing ritual. In a robotic manner they inspected each other. They formed into a line across the stage. With changes in the music they were individually activated into frenetic, akimbo, Gaga outbursts. The virus spread and we experienced subtle individual interpretations.

Over the duration of the dance there were many variations from individual seizures to groups and then the entire ensemble. There were unison passages including aggressive punching gestures.

The costumes  by Rakefet Levy were nerdy and unisex. The upper body was clothed in a loose fitting, neutral toned, long sleeved leotard that covered their hands. From the upper thigh down were black leggings. They gave the appearance of negative space dissecting and cutting the bodies in half.

The design allowed us to identify male and female dancers but their gender did not appear to be significant to the dance. There was little in the traditional sense of partnering or romantic interaction. This was an ensemble work with solos but no featured individuals. They all performed the same vocabulary of movement.

The impact on the audience was stunned self consciousness. On one level we were experiencing very different dance and movement. The norm is to sit and process that privately based on our level of experience and skill set. But the narrator subverts us. We are told what we are experiencing including how we sit in our seats while sensing time and space.

The intent is rude and makes us insecure and uncomfortable. At the end of such an unusual and transformative experience, or punishment, it is unclear if applause is genuine or a knee jerk reaction. It made me wonder whether the sophisticated Berkshire audience understood the manner and reasons why they had been humiliated and ridiculed.

Thanks Batsheva, in these difficult times, when our President is pussy grabber in chief, we really need a good bitch slapping to come to our senses.