The Who Rock Opera in Short Run at the Colonial 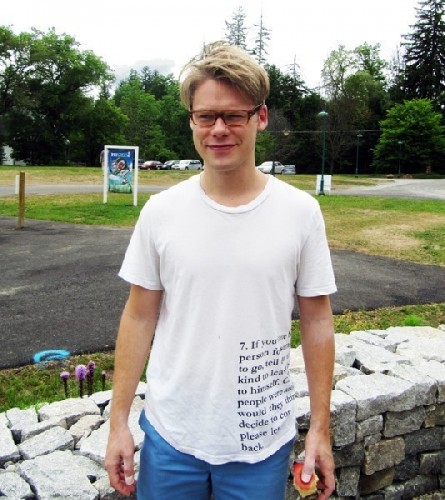 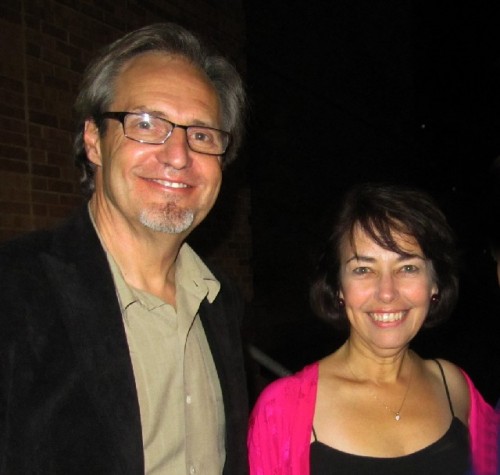 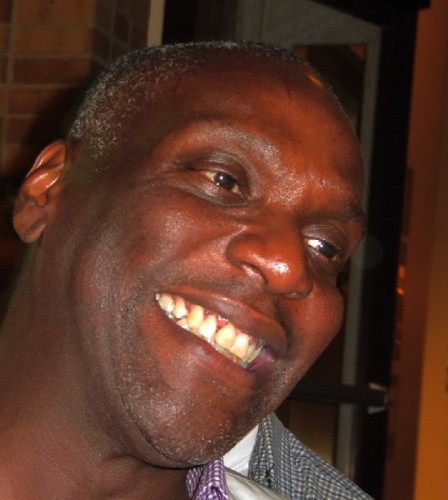 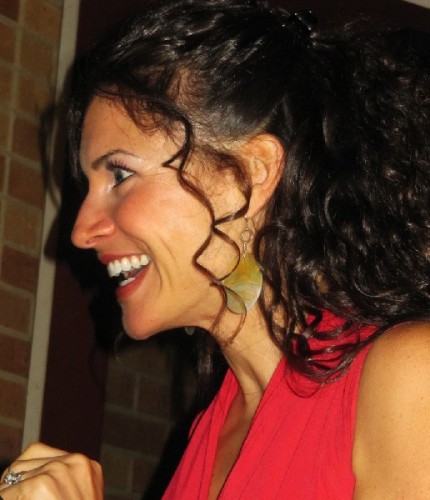 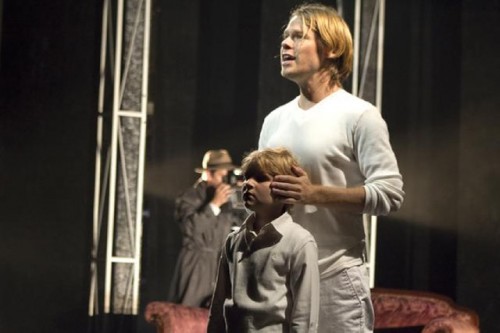 Randy as the Narrator with Paige Scott as young Tommy. Courtesy photo. 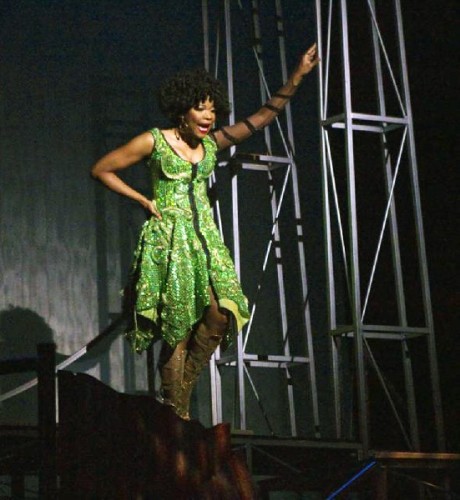 Angela Robinson made the most of her one song as The Acid Queen. Courtesy photo.

The triumphant, outrageous, off the hook opening of Randy Harrison starring in Tommy by The Who, last night at the Colonial Theatre in Pittsfield, was an historic occasion and game changer for Broadway quality, musical theatre in the Berkshires.

Randy Harrison, for the past several years the ace of the Berkshire Theatre Festival, left it all on the floor, in a production that was built around him musical brick by brick.

After taking one for the team in two Beckett productions and Ibsen, last year he was literally buried in the trash can in End Game, Randy has finally been revealed for what we have known all along. He is far and away one of the most gifted and charismatic stars of musical theatre of his generation.

If this show made it to Broadway Randy would age as Tommy like Daniel Radcliffe in that series of Harry Potter films. I can see for miles and miles and miles.

This is the breakout role for Harrison which is adding a new chapter, not just for the Berkshire Theatre Festival which was founded in 1928, but for the arts in the Berkshires. After a stunning and crowd warming opening last night there is no looking back.

The finale of “We’re Not Gonnah Take It” just built and built as Randy was joined by more and more cast members. By then in the trajectory of the rock opera he had evolved from deaf, dumb and blind kid to Pinball Wizard and rock star in a suit of lights. Randy was just beaming, energized, and having the time of his life as a spark ignited the audience. Zapped it had us bolted out of our seats clapping and cheering along madly.

It is the kind of audience response that I haven’t witnessed with such joyous, liberating intensity since the disco encores of Mama Mia in London. This show and production, here in the bucolic, laid back Berkshires, was every bit as wonderfully outrageous as that one.

In mounting this sensational production, with an absurdly limited run from just July 7 to 16, artistic director, Kate Maguire, has stuck her neck out,  but played her trump card, Harrison, perhaps too conservatively. Kate has run the table in what has to be the most stunning and incredible theatrical event of the Berkshire season.

But Kate, we want more, more, more. Screw the one nighters, cancel everything, and run this show till Christmas. Just two weekends doesn’t cut it.

What did we like about Tommy? Well everything actually, from a terrific cast, fabulous music, wonderfully inventive choreography, imaginative sets with sharp and zappy video projections, and over the top costumes. Everyone up. Take a bow, with the entire,  great creative team.

We’ll get back to that. But first a bit of history: Current and past.

It was just several months ago that the public was invited to an open discussion and press conference to announce a potential merger between the glorious old Colonial Theatre, lovingly renovated but sinking with stagnant programming and inept administration, and the ambitious, but landlocked, Berkshire Theatre Festival. In order to keep up and expand BTF needed a larger, more adequate house and the ability to be a year round organization and not just a summer thing.

The huge question, the gorilla in the room, was whether Maguire and her creative team had the chops to assemble original programming, and not just book touring one nighters. It takes a lot of time and money, with a daunting risk factor, to mount such an ambitious production.

They have had generous support from sponsor Greylock Federal Credit Union.

This sizzling production of Tommy demonstrates that Maguire has the artistic chops to pull this off but other issues and questions linger.

In the past, here again, BTF has faltered on providing adequate marketing, PR and advance coverage. Or even decent production shots which are mostly point and shoot. The images are just not up to the standard of other Berkshire companies.

Now that Berkshire Theatre Group manages two houses, and has improved to the big time, it needs to up its game. There has to be a better strategy for selling a bigger house with longer runs. Tommy will be over before the PR and marketing really get started. That means empty seats and lost revenue.

While twelve nights (including previews) is an absurdly short run, just two weekends actually, in an 800 seat house, that’s 9,600 tickets to sell. Last night, for the gala opening preceded by a VIP fund raising dinner and followed by a tent party, every seat was filled.

Once the reviews are in, hopefully as enthusiastic as this one, there should be a run on the box office. That plus word of mouth. But just one week is way too brief to build the momentum that this show needs to sell all those nose bleed seats in the second balcony.

Now back to Tommy.

Tommy was born in 1940 to a dad off to fight in the war. He was a POW and given up for dead. Mom found a lover who was a potentially good father to the lad. When Captain Walker miraculously returned home, in a rage, he shot his wife’s lover. The lad who saw it all was cursed and traumatized rendering him deaf, dumb and blind. Dad got off on a verdict of justifiable homicide.

Like Tommy I was born in 1940 and grew up with vivid but different childhood memories of the war. In that sense I have always embraced The Who and their notion of My Generation.

The Who, arguably the third greatest British rock band after the Stones and Beatles, released Tommy in 1969. That was a really great year. The Who performed at Woodstock. Famously Pete Townshend kicked Abbie Hoffman off stage. Gave him a boot in the ass that sent him flying.

In the era of rock operas Tommy was the answer to Sgt. Pepper’s Lonely Hearts Club Band or Beggar’s Banquet by the Stones. Sir Andrew Lloyd Webber launched his career with Jesus Christ Superstar in 1971.

As was so richly demonstrated last night Tommy is the most durable of the classic rock operas. In addition to great music and hit tunes like “See Me, Feel Me” “Eyesight to the Blind” “Acid Queen” “Pinball Wizard” “Tommy Can You Hear Me” “I’m Free” and “We’re Not Gonnah Take It” the musical has a solid and compelling book. It tells a riveting story of child abuse, bullying and trauma that has, unfortunately, proven to be timeless.

Live, The Who were far and away the greatest rock act of their era. It was always a thrill to see Townshend leap into the air with those signature round house, propeller blade assaults on the guitar which he always ritually destroyed at the end of a performance. Bar none, Keith Moon was a master of utter mayhem and the greatest all time rock drummer. It was usual to see him breaking sticks with his ferocious attack and then tossing them in the air or kicking his kit all over the stage at the end of the set.

Randy bears an uncanny resemblance to lead singer, Roger Daltry, one of the prettiest and most charismatic rock stars of his time. It was a rush when the bare chested Daltry, wearing a leather fringe vest, would whirl the mike about in circles that emulated Townshend’s flying leaps and swirling attack.

Compared to all the utter mayhem on stage the bass player John Entwistle just stood there and played. He could have been a statue.  They called him The Ox. But he was the absolute musical ground and anchor for all the chaos. Rather like the impassive Bill Wyman of the Stones. It is really what you want in a bass player.

One of my absolute  favorite, acid flashbacks of the early 1970s was a gig by The Who at the Commonwealth Armory in Boston. Far as I know it was the only time that a concert was staged there. The Who had gotten too big for The Tea Party but Don Law had not yet made the transition to booking Boston Garden.

On that tour The Who played the entire Tommy. My friend Ronnie and I were freaking out with front row seats. Wicked cool. You never forget such an experience. It defines an era.

But also, unfortunately,  it creates a paradigm when six very good musicians recreate that classic rock sound. They were really really good but cripes how my few remaining brain cells hungered for Keith, Pete and John. Not Roger actually as Randy was more than up to channeling the lead singer. Just incredible.

Keith and John are no longer with us. Both over dosed on drugs. Whom the gods love.

Hey, that was then and this is now.

There are so many highlights to the Colonial production that is impossible to list them all.

Special kudos to the wonderful singing and acting of Jenny Powers as Mrs. Walker. With her one great song Angela Robinson made the absolute most of “Acid Queen.” Christopher Gurr was suitably creepy as the pedophile Uncle Ernie who turned baby sitting into an opportunity to grope the young and helpless Tommy. It was abuse echoed by the well played Cousin Kevin of Ken Rosenblatt. James Barry was strong as Captain Walker.

The staging and directing of Eric Hill was often brilliant. First to get through all the incredible tech rehearsals and lighting cues. That must have been a nightmare on such a tight schedule. He took full advantage of the scope of the theatre. It was a great touch when Randy first appeared as the Narrator just a few rows away from us in the balcony. It widened the dimensions of the theatre. In general the direction of Hill, combined with the fast tempo of Gerry McIntyre's choreography, kept the action flowing nicely.

One of the challenges of Tommy is conveying a sense of passage of time. From London during the Blitz, to the look and garb of the psychedelic 1960s when Tommy, played by three actors, would have been in his twenties. Randy may be a tad older than that by now but he still looks like the gorgeous kid next door.

The sets by Gary M. English, slide projections of Shawn E. Boyle, and costumes of David Murin, all meshed perfectly to move us through the look and feel of three decades. There was always a nice synch between the staged action and the visual cameos projected into a large, suspended tondo.

That ended with a projected image of The Who. It sent a roar of approval and appreciation as we kicked and stomped to the end of an insanely wonderful evening of acid flashbacks.

As The Who would say “Don’t Explain.”

Italian Blog Links to The Great Charles Giuliano. No kidding check it out.