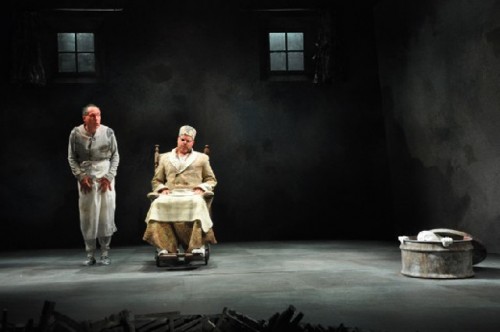 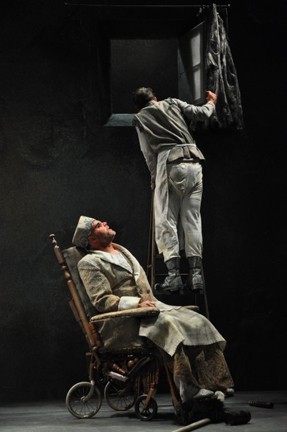 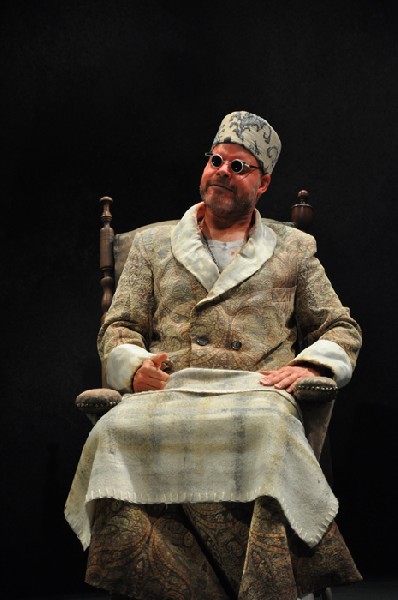 The play revolves around the abusive Hamm. 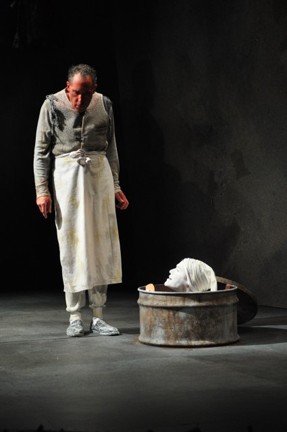 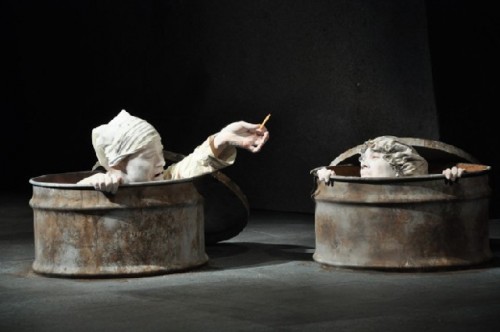 Hamm has trashed his parents Nagg and Nell (Tanya Dougherty). 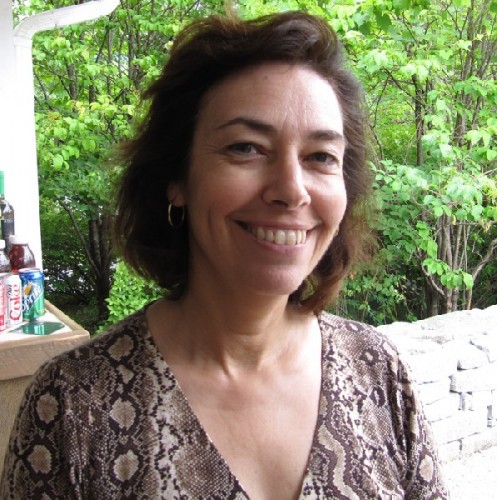 Kate Maguire, the artistic director of BTF, smiled when asked if she plans to produce more plays by Beckett. Giuliano photos. 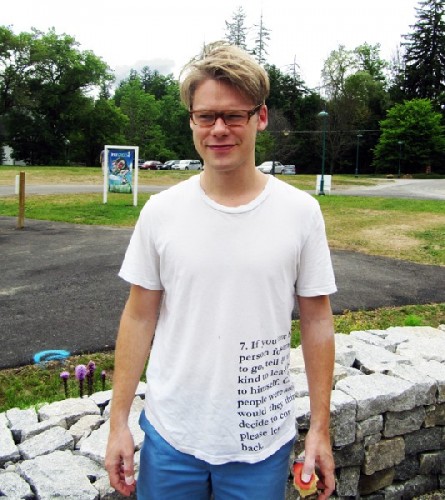 Randy Harrison was munching on an apple between shows. 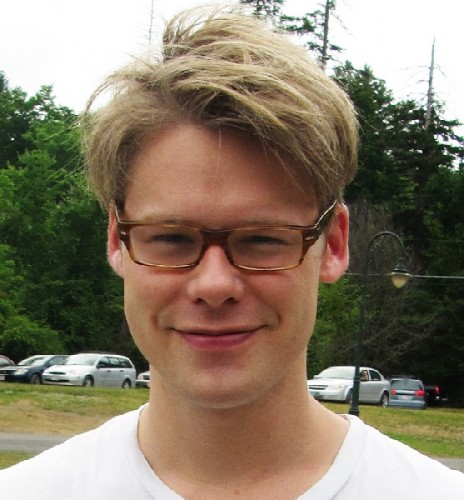 Will Randy return next summer in Krapp’s Last Tape?

Two summers ago the Berkshire Theatre Festival presented Waiting for Godot with Randy Harrison as Lucky. He appears again this season with a supporting role in the four person cast as Nagg in another Samuel Beckett play Endgame.

We talked with artistic director, Kate Maguire, following the matinee on Saturday. Having produced two Beckett plays in three summers we wondered if BTF planned to present the Complete Beckett? The next and most obvious production would be Krapp’s Last Tape, perhaps a solo for the very talented Harrison.

“Wouldn’t that be wonderful” Maguire responded with a warm and knowing smile.

I applauded her for having the guts to present the demanding works of Beckett. It would seem to be a tough sell for a summer theatre program. Folks on vacation are not generally eager to have their heads knocked by Theatre of the Absurd.

And nobody, trust me, is more absurd than Beckett. Endgame is among his toughest works. By comparison Godot is a picnic in the park. Just months before he died Harold Pinter played a sold out engagement of Krapp’s Last Tape in New York.

In a riveting interview Pinter discussed his friend Beckett with Charlie Rose. It provided rich and emotional insights about two of the greatest playwrights and artists of the modern canon.

It is fascinating that Randy Harrison has defected from a sure fire career in Broadway musicals to delve deeply into Beckett and other modern masters. Last year he performed in a production of Ibsen’s Ghosts.

These regular summer appearances by Harrison sell tickets. Many of his fans come several times. Maguire reports that sales for Endgame in the smaller Unicorn Theatre have sold well. Both the matinee and evening performances this weekend were sold out.

Under the direction of Eric Hill this was a flawless production of Endgame. It just doesn't get better. The dank and dingy set by Gary M. English was perfect. There was the moody lighting of Dan Kotlowitz.

These superb production tools melded superbly with a dream cast. There was just the right horrific synergy in the dauntingly awful, abusive relationship between the master, Hamm,  performed with stunning power by Mark Corkins, and the groveling, shuffling, and resentful slave, Clov, played to perfection by the agile and inventive David Chandler.

In the most demanding and famous staging of modern theater Hamm’s distressed, sick and dying parents Nagg (Randy Harrison) and Nell (Tanya Dougherty) are legless creatures living in trash cans.

What an incredible analogy. Discarding your parents like garbage in trash cans. It made one think of how sadly common is that horrendous fact of life. They gave us the gift of birth, and nurtured us to maturity. Yet, so many resent caring for aging parents. Beckett’s trash cans are signifiers of nursing homes or retirement villages. More and more the elderly are the neglected waste product of society.

However harshly Beckett rings true with that ominous image.

What draws us to and repels us about Beckett is the terrible, inescapable truth of his bleak images and dark humor. There are times when we laugh at the outrageous absurdity but it is a guilty pleasure.

It is also an acquired skill to sit through Beckett. At some point you stop trying to make sense of the experience and just surrender to taking an aesthetic beating.

I never walk away from an evening of Beckett without discovering something ominous and terrible about myself. No other playwright is more effective at probing into the deepest and most closeted recesses of the human psyche. Of course other great artists have taken us there from Dante’s Inferno, Michelangelo’s Sistine Last Judgement, the illustrations and poems of Blake,  Goya’s Disasters of War and Black Paintings, The Underground Man of Dostoyevsky, Camus’ The Stranger, or the stories of Kafka.

The greatest artists allow us to plunge the depths of humanity. But as visitors or tourists. For the tormented artist perhaps it never goes away. It makes one wonder just what  inspired them?

There is so much abuse in Beckett. Consider the relationship between Pozzo and Lucky in Waiting for Godot. How much it parallels the interactions between Hamm and Clov. A difference is that Lucky is mute. Until the famous Lucky speech. Where Clov fights back and bickers with his tormentor.

The monolith Hamm is blind and confined to a wheel chair. He wears sun glasses, which he cleans frequently with a bloody rag. At one point he asks Clov if he has ever looked into his white sightless eyes.

On stage Hamm is the matrix of the drama. Everything revolves around his will and whims. His survival is tethered to the sniveling servant Clov. He is the eyes, ears and soul of Hamm. Even though reduced to complete dependency Hamm controls all that surround him.

Beckett has an interesting fetish about food and starvation. In Godot there is the slap stick routine about “Give me a carrot” or “I want a radish.” In Endgame the wretched Nagg begs for “Pap” and is given a starvation ration of dry biscuits. When bribed to listen to one of Hamm’s rambling stories Nagg asks for a sugar plum. These scraps of food, that barely sustain life, are a constant image in Beckett’s plays. In Krapp’s Last Tape there is a bit about a banana. The character stretches out and swoons over the word “banannnnnnaaaaaa.” Just as he articulates “spoooooooolllllll.”

In addition to crumbs of food Hamm also demands to know if it is time for his pain killers. As the play crawls on it is a question for the audience as well.

The incremental passage of time is another trope for Beckett. The plays often evoke the notion of watching paint dry. In that sense he abuses us. Just like his actors we become appropriated into the abuse. The audience as victims. We become conspirators conscripted into the ritual killing of time and spirit. Our reactions to the plays are a measure of the willingness to participate.

This is the opposite of the realism of most contemporary drama. We experience mirror images or aspects of ourselves on stage, screen and TV. We are asked to identify with the characters. Mostly it is so terribly boring and uninventive. Unless it is jacked up with mayhem, speed, and action. And keep it short. Just 90 minutes is ideal.

But Beckett is never about allowing us a comfort zone. The audience is a target to be attacked.  Those of us who actually enjoy the experience get to revel in our sophistication. We come to feel that Beckett is the Only theatrical realism. All else is a pretentious, vulgarian sham. The “Pap” that the desperately starving Nagg demands.

What fools we mortals be.

Another trope of Beckett’s is the notion of the utopian. That better world just over the horizon and beyond our reach. The two clowns, day after day return to the barren landscape, a post war image, to wait for the arrival of  Godot. He will set it all right. Hamm asks Clov to climb the ladder and look out at the landscape which he cannot see. Krapp, now old and deranged, plays tapes recorded in sanguine youth. There is always that other time and place. It is what sustains us through the tedious increments of living, the horrors of war and natural disasters. Beckett was a writer of the post nuclear age and the Cold War.

One problem with Beckett is that once you have seen his play it just won’t go away. It took two years to recover from Godot and now it starts all over again with Endgame.

Although Endgame was the one production I most anticipated this season it’s good to be behind me. Or is it? You wonder about the actors. How do they deprogram Beckett?

This is usually the point at which the critic sells the show to the reader. “Run, don’t walk.” “Don’t miss this show.”  “One of the season’s best.” That kind of stuff. The theatres pull out those quotes and plaster them in their ads.

But I suggest something else. If you suffer from fits, seizures, or depression, please don’t see Endgame. Consult a physician before attending this production. If something truly awful happens don’t blame me. It’s not my fault. I told you so.

After the show, while we were chatting with Kate and Jaime Davidson, Randy walked out. He was eating an apple. A snack between shows.

I commented that he looked different having washed off the white makeup. There seemed nothing odd or deranged about him.

During the performance there were compelling moments when he raised his head above the trash can and begged Hamm for food. His hands trembled and groped about the edge. Now and then he reached over to Nell (Tanya Dougherty), knocking on her lid to see if she is OK. It was such a tender and wrenching image. Both of them had done so much with small parts. They were unforgettable performances.

Feeling awkward I asked Randy if I might take a picture, stammering something about how doing Beckett must be tough.

“Not really” Randy said while politely returning to the business of eating an apple. A bit of sorbet to clear the palate between performances. How Beckett. It might have been a radish.