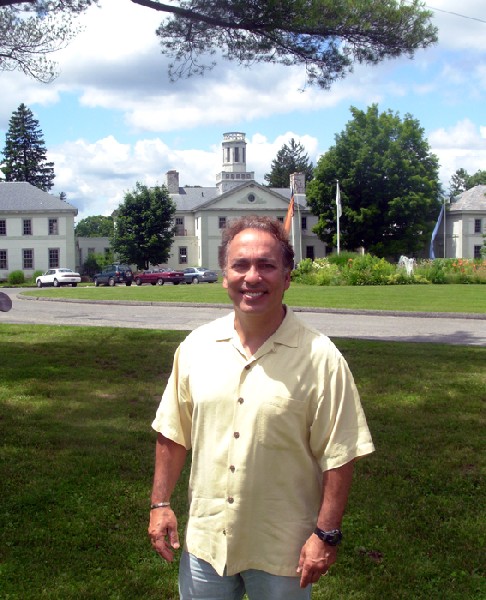 Tony Simotes on the Shakespeare & Company campus in front of the historic McKim Mead and White buildings which have yet to be developed. Giuliano photos. 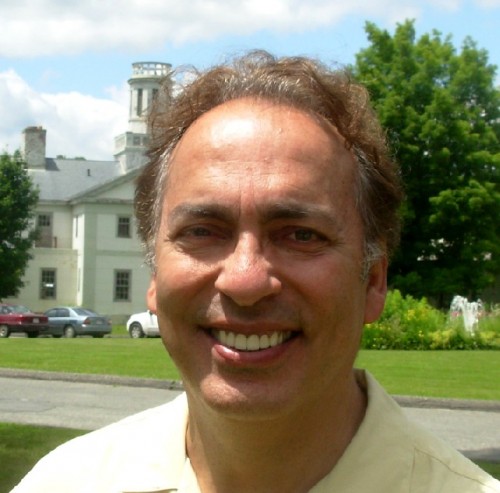 Simotes in his first season has a record setting 18 productions to deal with. 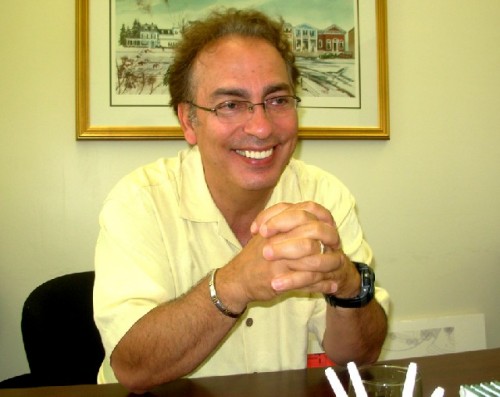 He is focusing on long term funding and artistic vision for the historic company. 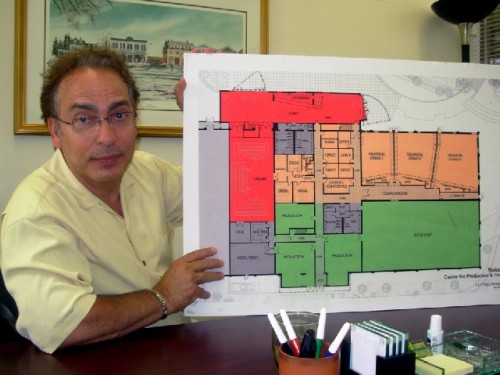 The development of a vast space including the Elayne P. Bernstein Theatre is a key part of keeping S&Co vibrant and solvent year round. 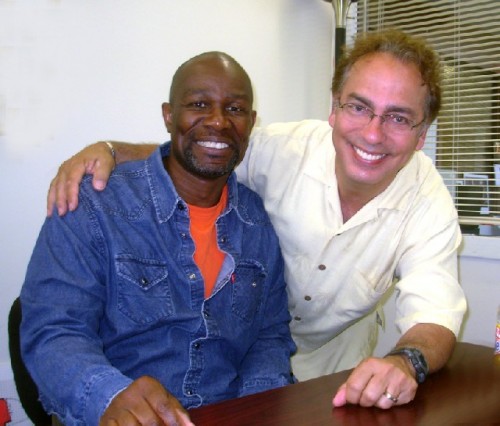 Simotes with John Douglas Thompson whom he directed in "Othello." 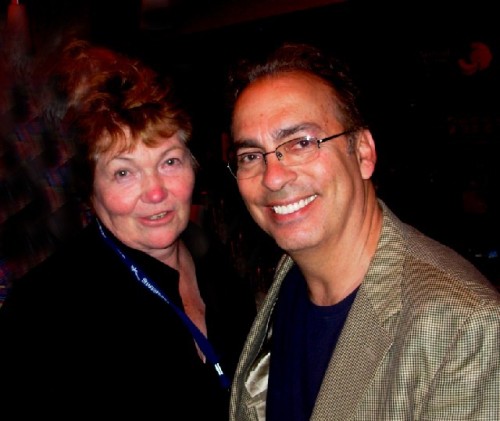 Tony and Tina in transition with S&Co. 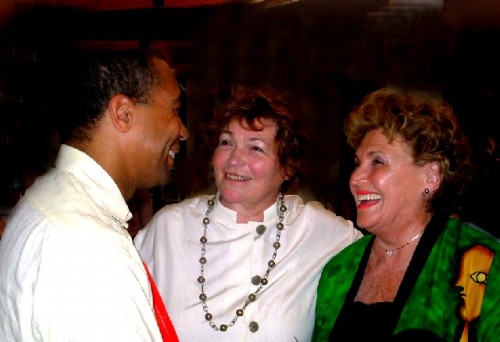 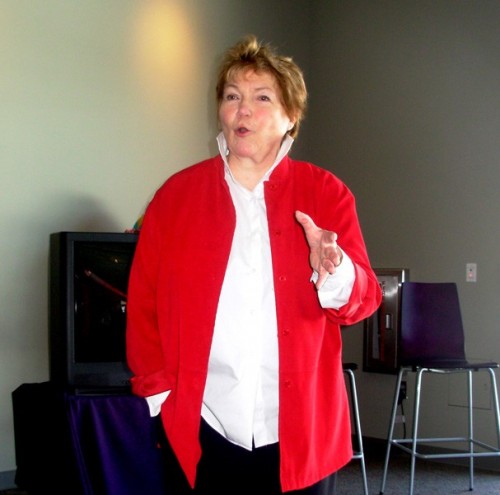 For 32 years Tina Packer has been the heart and soul of the company. 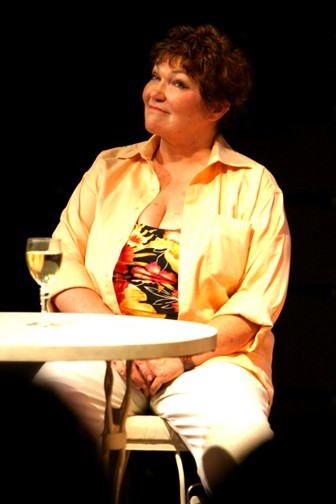 Tina Packer was a hit as "Shirley Valentine" during the Diva Series. (S&Co photo). 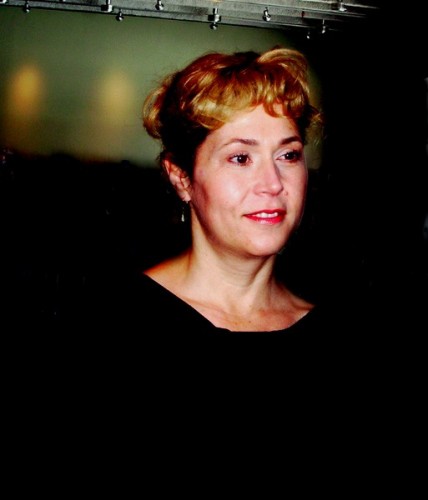 Elizabeth Aspenlieder won the Norton Award for her performance in "Bad Dates" and will return in the winter season with "Dangerous Liaisons."

When the actor/ director,  Tony Simotes,  took over as the Artistic Director for Shakespeare & Company in June he inherited a daunting task. The founder, Tina Packer, has stepped down after some 32 years. The charming and charismatic Packer has been the heart and soul of the ambitious company.

Packer left him a full plate executing the company's record breaking schedule of 18 productions. Many of them are recycled from past years or done, bare pipe style, cost effectively with several one person and minimal cast shows. The Packer strategy was to perform and earn the company out of a poor economy.

In addition to the madcap pace of mounting all of those productions, however minimal, there was the matter of completing a drive for $10 million assumed through the renovation of the Elayne P. Bernstein Theatre and its related facilities. This is the first full summer of  running tandem programming in the older Founder's Theatre and the new, smaller (200 seat) Bernstein Theatre.

Before and after shows Packer and Simotes have been bounding on stage appealing for contributions. In late May for the opening of  "Romeo and Juliet" which launched the season, they reported  having raised $8.2 million toward a goal of $10 million. Once the next phase is complete S&Co will received a grant of $800,000 from the Kresge Foundation.

We met with Simotes for a progress report. Overall, he told us that the season is going well and reaching expectations with even a modest increase in ticket sales from the prior season. This expanded programming is new for the company. It is the first full season with two facilities and simultaneous productions. That's a lot of seats to fill. Especially on week nights early in the season. Looking around the perception was that the house was thin.

Coming into this season nobody says it was going to be easy. Simotes stated that numbers are up from last season. To put that in perspective, however, last year there was gas at $4 a gallon, bad weather (does this sound familiar?) and  a sour economy which has only gotten worse.

While arts presenters  are reluctant to post numbers, over the winter, there were reports of pervasive cutbacks. On average about 20% for each institution. For S&Co the strategy has been to do more, those 18 productions, with less. The 2008 operating budget of $5 million was reduced to $4.5 million.

While making administrative and marketing cutbacks the overall strategy of Berkshire arts organizations has been to offer full and ambitious programs. Williamstown Theatre Festival reduced its Nikos Stage program from five to three new productions. Tanglewood even added a week because of late Labor Day this year. The final week is a mini James Taylor festival which is already sold out. Barrington Stage ran at about 85% capacity for its season opening musical "Carousel" and sold out many performances of its second stage production of "Freud." Tanglewood has been well attended although the Saturday night production of Wagner was a washout on the lawn.

Despite the hard times and poor weather including the June Monsoon, it is becoming evident that audiences will support appealing programming. There appears to be a new development of interest in Cabaret with sell outs for Mandy Patinkin at the Colonial and Bebe Neuwirth at the Mahaiwe. Barrington Stage has experimented with Cabaret upstairs at Jae's Spice and is exploring more bookings. The Williamstown Theatre Festival has a long tradition for its late night Cabaret series.

Sitting down with Simotes in a conference room  I asked about money. His  response was "That's what I've been doing all day. The good news is that people are coming. We are meeting most of our obligations for credit. There is a strain for not for profits. People (vendors/ creditors) want their money up front. Right now every arts organization is competing for the same limited sources of money from grants and donations. I'm focusing on the long term health of the organization and its artistic vision. I'm looking at this moment in time as a storm like so many others that we have weathered over the past 32 years of the company."

The company moved to the Lenox campus after a long and complex tenure at "The Mount" the estate of Edith Wharton. There is a plan  for The Mount to bring back theatre this summer. Over the past couple of years The Mount has been on the brink of bankruptcy but is reported to be making progress on becoming more solvent. When we explored some of the history of how S&Co came to the former campus of the Lenox School for Boys, with its McKim Mead and White buildings, he deferred to Packer.  .

While Simotes is new to the position he has a long relationship with the company in what is intended to be an orderly transition. The plan was to have Simotes come on board debt free with a new facility and a start on an endowment. Of course nobody could predict what happened to the economy that saw portfolios and endowments diminished by an average of a third to a half. In the news this week, for example, it is speculated that the Franklin Park Zoo in Boston might close and euthanize its collection. Its funding has been slashed by Governor Deval Partick. In the face of declining state revenue there are tough decisions to give funding for arts and culture when schools and hospitals are struggling as well.

While there is still debt to service the development that includes the Elayne P. Bernstein Theatre is intended to generate money year round. Simotes produced a poster sized ground plan of the North End or  the now developed half of a former sports facility. With its generous lobby, theatre, scene shop, rehearsal rooms, kitchen, and offices it is in almost constant use. It is available for functions, weddings, conferences and other uses. When and if it runs at full capacity there is the option to develop the other half of the vast building.

Simotes faces the immediate challenge of retiring outstanding debt. Long term the development is part of a strategy for economic growth and stability. One great advantage of having extensive real estate is that there is room to expand. The historic McKim, Mead and White buildings are in disrepair but have the potential for future renovation.  Compare this, for example, with land locked urban companies with expensive properties and overhead.

There is more to S&Co than performance. The company also provides an important teaching and apprentice program. The full time staff has a mandate to help with teaching and administration as well as performing on stage. Simotes will also continue to direct, act, and teach master classes. He stated that there are 200 people currently on campus. The former school provides adequate housing for students and staff.

Unlike the other theatre companies Simotes expressed that "We are going all year full tilt. It's not like we 'moth ball' the campus during the off season (like a shuttered Tanglewood and Jacob's Pillow) and start up again in summer."

For his first year as Artistic Director Simotes has inherited the program and schedule. "I was dropped into a situation which couldn't be worse" he said. "Every arts organization in the country right now is just stressed. In this climate we are trying to make progress. We sold more tickets last week than we sold at this time last year. This year the formula is that we have that many more plays and seats to sell. We are trying to ascertain just what is the right level for just how many performances with how many seats."

During the winter there will be an analysis and marketing strategy of just what worked about this experimental season. You sense that Simotes will plan differently  for the 2010 season which will be announced in the winter. He indicated cutting back on the number of shows and perhaps scheduling and timing them differently.

For the past couple of years Berkshire theatre companies have experimented with extending their seasons. The WTF season ends because of the use of its theatres by Williams College. But the other three major companies are attempting to develop local audiences and not depend entirely on summer tourism. S&Co enjoyed great success with a winter production of Elizabeth Aspenlieder  in "Bad Dates" which, after a long and successful run, she took to the Merrimack Theatre in Lowell. She won the Elliott Norton Award for that performance. This year she will star in a winter production of "Dangerous Liaisons."

Regarding the early season "Diva Series," three one woman shows, because of minimal costs, Simotes stated that "They made money. Even with a small house they brought in a sizable amount of money that we were not making at that time last year. What I want to look at next year is when does the season have the best chance to maximize its sales now that we have a better understanding."

It is clear, for example, that Packer's hit performance in "Shirley Valentine" could have had a longer run. While everything is in the planning phase there is discussion about how best to use Packer and her proven appeal to audiences. Simotes is considering having her open the season in 2010 with a production that would be up for a month through the Fourth of July. "Next year I hope to have Tina as my horse out of the gate to pull the cart."

This is in the planning stage but the thinking is that Packer will revisit a project enjoyed by audiences in the past. The concept is to jump start the season. It would be a bonus to have great reviews and strong ticket sales for a month leading into high season.  Packer is one of the great resources of the company. With Simotes taking over administration of the company it is the right time to reassess her role.

He compared Packer to a veteran baseball player. "I look at her as the Designated Hitter of  S&Co. She has earned the right to not have to be on the field every day. In addition to (probably) opening the season she will also direct a new play which we feel has great New York potential."

It is too early to say but Simotes might even appear in that new play which Packer may direct.  A lot can happen between now and then. But the sense is that S&Co is going through a dynamic time of transition and change. The challenge is how to emerge from tough times focused and stronger.

A lot of this strategy has been planned for some time. "It's a great fit for me to come in and help Tina through this transition. I am the right guy for this. It has been in the works for a couple of years. The plan was for Tina to leave the company with an endowment, a new facility, and no debt. Then the economy went into a tailspin. Nobody saw this coming." That's Show Biz.