Andrea Maulella in a Brilliant Turn 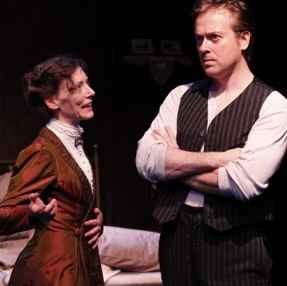 Adelaide and George consider their options.

Perhaps a moment of understanding?

Preparing to don her new nighty and consummate her marriage.

The Irish Repertory Theater is presenting a lively and engaging production of Karoline Leach’s play, Tryst.  That men take advantage of vulnerable women has been noted from the beginning of time.  In some ways, our ether contact makes engagement between two people who don’t know each other well even more likely.  In Tryst, a presumably retired diplomat, who has blanketed the Empire, is looking for a timid woman with a diamond brooch and a bank account.  The dangers are made cruelly evident on stage at the Irish Rep.

What protects you from another person if they turn out to be a cad or even worse, a criminal?  Playwright Leach comes up with some surprising answers.

From this tense background,  monologues and dialogues arise with wit and sting.  Director Joe Brancato masterfully brings forward the plot’s twists and turns, while both damaged characters are extraordinarily sympathetic.  Despite the hurdles presented by Shanahan’s character, he manages to seduce the audience.  “Mind you, I’m never cruel.  I never hurt them…and I do give them a good time.”  Or so he says.

At the play’s opening, Adelaide, a mousy shop girl with a plain face and oversized heart seems defenseless.  George ‘Love’, a con man supreme, talks about what he wants and how he has  tried to fill his needs in the past.  Maulella and Shanahan are so engaging that the stage seems peopled with many characters from their lives. Although the characters are like ships passing in the night, they often brush perilously close to thrill us.

Once fully engaged, we admire George’s skill as a seducer, who, when stripped to his undershirt, has the appeal of Stanley Kowalski.  As the play progresses, we sense that Adelaide has yearned for physical pleasure for a very long time. At first  sheresists a tumble insisting that, once alone in a tawdry honeymoon room,  they play cards and sip tea.

Shanahan succeeds in manipulating his eyebrows to arch like those of Jack Nicholson’s Joker.  But he has met his match in Adelaide. It is taking too much time to seduce and betray his new wife.  Yes, they have married.  As he swings from tender to tough, Shanahan holds us in thrall.

Andrea Maulella is a force of nature as the buttoned-up, prim seamstress who takes great pride in her work.  There is  a realistic sense that she works in the backroom at her shop because she is not attractive enough to work out front.   This realistic self-appraisal may save her from the con man’s grips.  Maulella is a brilliant actress, her fluttering hands, gripped in a fist, then dancing like fire flies in the air, tell us everything we need to know.  But subtly she provides so much more in tone and a caress of her dress. A spellbinding turn from a doormat to a richly emotional woman.

The play’s major flaw is in pinning the characters’ motivation to some pretty old-fashioned psychological insights, which flatten the arc.

Despite these too simple to be true insights, the play is a thoroughly gripping evening of theater.   Caveat emptor on your match.com ventures.