DohnÃ¡nyi, Ax and the Orchestra Entrance in Beethoven 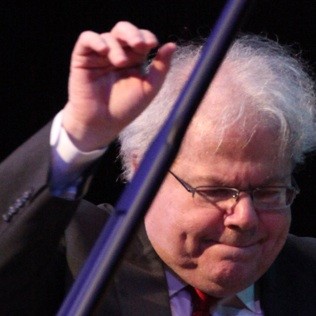 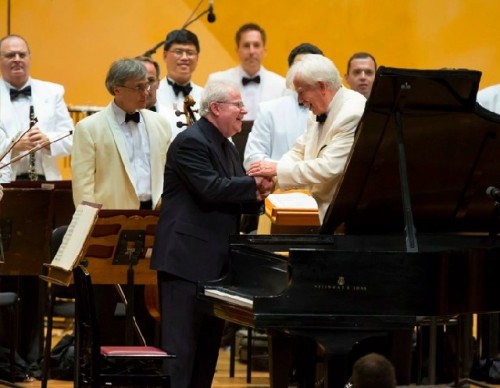 The Soloist and the Maestro 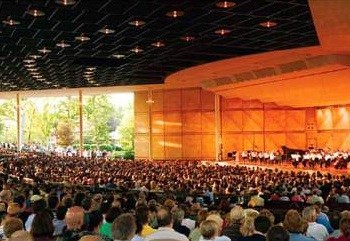 The Chicago Symphony Orchestra opened at its summer home at the Ravina Festival this week.  An all Beethoven program was a perfect choice for the lawn abounding in picnic baskets, wine, candles and quilts.  Beethoven thrills in his daring and is comforting in his familiarity.

Christoph von Dohnányi conducted the Eroica and Emanuel Ax performed the Piano Concerto No. 3 in C Minor with the orchestra.

Ax is a Berkshire resident and both artists are familiar to Tanglewood audiences.  Ravinia and Tanglewood summer festivals continue to excite.   Despite bumpy times for symphony orchestras, both have survived and in fact appear to be thriving in their 76th seasons.

Ravinia was packed.  Sitting on the lawn provides a place for young live wires to jump and run to the music.   Many of them conduct with the Maestro, one from a Radio Flyer wagon.  A huge screen brings the audience at the outposts of the grounds an intimate view of the stage proceedings.

You can look down on performers’ instruments, examine the forceful downbeat of the Maestro’s arms and wonder at the flexibility of Ax’s fingers.  His staccatos are clearly different from his dramatic concluding chords.  In the staccatos, he touches notes briskly and his fingers magically release as soon as he hits a note.  For the intense finales, he raises his arms high, and magisterially places the fingers on a succession of chords that ring out into the Illinois night.  As a form, concertos were originally accused of serving only the technical virtuosity of the composer/artist.  Musical edification was not designed to be part of the experience.

At Ravinia, the grandeur of the orchestra and the virtuosity of the instrumentalist create a passionate and edifying dialogue between orchestra and pianist. Ax only shows off the music.  This is clear throughout but of particular note in the largo movement of the Concerto where Ax’s distinctive gifts were on full display.

No one plays pianissimos like Ax.  They are almost inaudible, but so beautiful that you listen with keen attention and appreciation.  His lyricism is matched by the orchestras' as they hand off the music to each other.  A stunning collaboration at the end of which there were audible sighs of pleasure across the Ravinia hall and lawn.

When Ax is on a  breather, he sits erect, ear cocked, and listens with obvious pleasure to the orchestra, his face wreathed in smiles.  But he is at attention the moment his musical role commands.

The Largo is one of the most expressive and emotionally rich instrumental pieces of all time.  Ax and the CSO under Dohnányi make this eminently and refreshingly clear.

The Eroica and the Concerto match in more ways than their No. 3s.  Each begins with an allegro con brio.  Although Dohnányi’s take was slower than usual, Ax shined in the Rondo of the third movement.

The Eroica began briskly, its high spirits blaring out into the night in the horn trio of the Scherzo.  The variations in the final movement were full of fun and vigor.

Beethoven mysteriously included a funeral march in his tribute to the heroic.  When he wrote, French music was full of funeral marches, so Beethoven would have been familiar with their themes.

The woodwinds and particularly the oboe shone in this performance under Maestro Dohnányi.  The trio in a surprising C major is brief, but the oboe and flute sang warmly before others joined them.  Back to C minor for a solemn conclusion.

Dohnányi drew forth a difficult contrast from the mechanical march passages to the emotionally charged anguish of the more animated sections, moving from tenderness to sorrow.

The gorgeous fugue rivals any in its magnificence.  It stood out as the dark night was lit by a rising quarter moon and the Big Dipper clear above.

The evening was full of compassion and urgency.  As Boston’s new music director is fond of saying, “This music is food for the soul.”