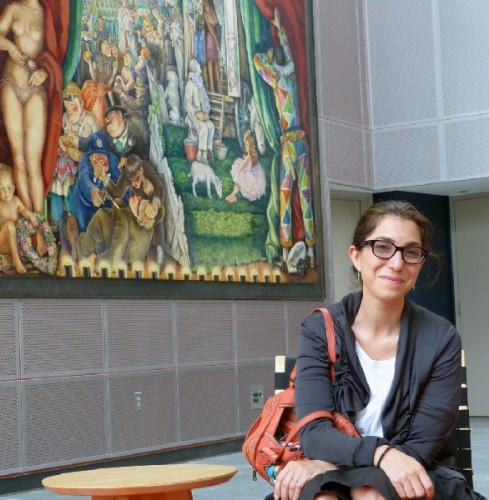 Jenny is now mid way through her second season as artistic director of Williamstown Theatre Festival. 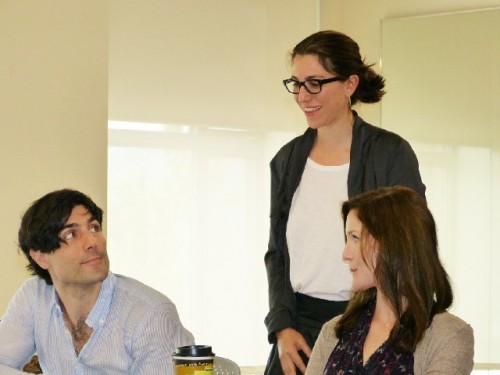 Jenny with Louis Cancelmi who is in two WTF productions this season.

Although this is Jenny Gersten’s second season as artistic director, she has a long term association with the Williamstown Theatre Festival. She worked with Michael Ritchie when he was director of WTF from 1996 to 2005.

Even before that, a life in theatre has been mother’s milk and the family business. Well, her father's actually. Bernard Gersten has been the Executive Producer of Lincoln Center Theater since its re-establishment in 1985, in partnership with Gregory Mosher through 1991 and with Andre Bishop as Artistic Director since then. He plans to step down at the end of the year.

Prior to Lincoln Center, he was closely associated with Joe Papp, the legendary founder of Public Theatre. It gets complicated. Papp fired Gersten’s father, and Jenny later worked for Public Theatre after the death of Papp (June 22, 1921 – October 31, 1991). She came to WTF from Public Theatre having been involved with producing the Diane Paulus, Tony winning revival of Hair on Broadway.

Her first season as artistic director was challenging. It was book ended by acts of God sandwiching ambitious productions that got mixed reviews by critics but stronger responses from audiences. Before the season started, the roof collapsed at the Delftree Mill in North Adams which housed the long time scene shop and prop storage for the company. The shop was moved to the Blackington Mill at the other end of North Adams. Amazingly, all the complicated sets were constructed without a hitch.

Then the rains came. First a hurricane followed by downpours. The basement of the Blackington Mill was flooded destroying a priceless collection of props.

After such a traumatic first season, Gersten regrouped and planned what, so far, has been a superb program with more yet to come. Having endured that initial trial by fire, there have been changes and adjustments.

Significantly, a first for WTF, last week Gersten hosted its third press conference and photo op with regional print and online media. It has resulted in diverse advance publicity and chances to interact with the full range of actors and directors involved with one of America’s most renowned, regional theatre companies.

A notable aspect of that process is creating a better educated media, hopefully, resulting in more complex and informed reviews.

That agenda is particularly significant for the upcoming, final Main Stage production of Turgenev’s pioneering A Month in the Country.  It has been staged by WTF but not in recent years. The production does not include any of the marquee stars who have helped to sell other WTF shows this season. As we learned, there will be many radical ideas, more like American Repertory Theatre, during its Robert Brustein era, than the more mainstream WTF.

While we waited for the rehearsal to break, there was time to chat with Gersten and take the pulse of the season so far. Considering the impossible logistics of keeping so many shows running simultaneously, she appeared relaxed, accessible, charming, and chic in a fashionable summer ensemble.

Charles Giuliano Can we talk about the season so far. We have already seen three productions and another one coming up this week.

Jenny Gersten I know. We just had our first Cabaret last night. There’s a lot and free theatre happening so we actually have four shows right now. I have barely had time to stop and look back to be honest. I can tell you what it feels like. Being around the theatre I have a sense of positive emotion from the public as well as the artists. They are also having a positive experience. It’s very gratifying.

CG Can you describe how it feels keeping all those balls in the air at the same time?

JG It’s become second nature to me having spent so many summers here. It’s actually muscles which I developed here at Williamstown.

JG They are absolutely muscles and they serve me very well. When I got to the Public, and I produced a bunch of plays there, I was asked how do you keep them all straight? I answered “Williamstown.” It’s a very different way of thinking about shows. Mostly when you go to theatre companies they produce one-show-at-a-time.

JG There’s not a lot of time for dwelling. That for sure (laughs).  That’s what I find. Every day there are a hundred situations that present themselves. You don’t have time to stew and solve them.

CG Of course there’s months and months of planning for every minute of every day. To structure this clock-like schedule. Describe that process.

JG It’s skeletal at the beginning of the year because there are just eight, year round, staff members. There are some people not on staff yet who are hired to start working in June. So there are basically eight people working on the festival year round. We get here in May and there’s twenty people, then thirty people, then fifty people and a week later 120 people. Then the dorms become available and in June we have 300 people. The sources of information keep going out and out until we are all working together.

CG The first time we met you, two years ago, was also when there was a reading of Last of the Red Hot Lovers directed by Jessica Stone which is currently on stage. To what extent do readings impact programming?

JG It’s a chance to hear the play before a live audience and see how it responds. They generally go well. They are always positive events. Then it becomes a taste thing. To then say, I like that play, and the opportunities it presents.

CG Is Misanthrope (a reading of the Moliere play this past winter) a part of your thinking process?

JG Yeah. I’m thinking about it. Absolutely. I thought that was a great reading.

CG That would be awesome.

CG We saw him in Chicago in Iceman Cometh and there was some speculation, but we talked with him recently, and he said that’s not happening. He’s here at the end of the summer in the new Terry Teachout play Satchmo at the Waldorf  at Shakespeare & Company.

CG But you would like to do it (Misanthrope).

JG I’m thinking about it. I thought it was a great reading and Richard Wilbur’s translation is fabulous. He was wonderful in that.

CG Things come out of readings.

JG Absolutely. They’re really helpful. We have another one today at 3 PM.

CG So that’s a part of the process of putting a program together.

JG Yeah. It’s definitely an element. The readings we do allows us to make contacts with artists we might not otherwise engage. It’s a double win.

CG This is your first Neil Simon?

CG For Williamstown as well, right?

JG No. I thought that and was corrected on air by WAMC a couple of weeks ago. But now I can’t remember when we did it.

CG But it’s your first time.

CG So how do you feel about that?

JG I was surprised. Jessica (Stone) came to us and said she wanted to do it. It was what she was interested in. And I thought. Really? Neil Simon! I think it feels cheesy, right, at the outset. When we did the reading of the play Jessica’s position on it has always been “There’s a beautiful gem of a play in there.” And, she was right.