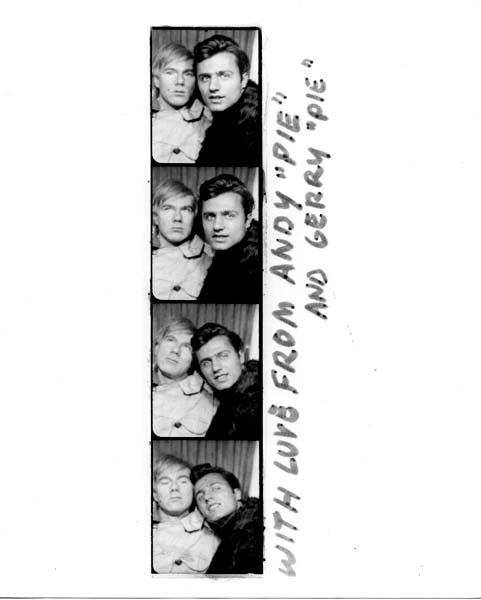 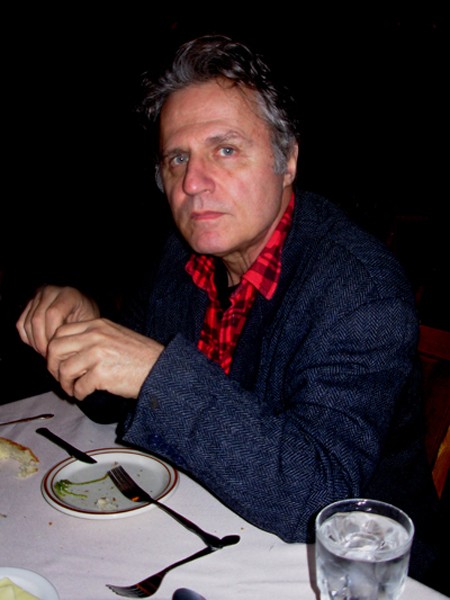 Dinner with the G in Brooklyn. Giuliano photo.

I can't imagine Andy at 80!  If he were, he would be a very old man.  Hate to say it, he didn't look too well at 58 the last time we spoke, though his sense of humor never wavered.  Maybe he just got a little more coy, or maybe he was just truly frightful.

I remember Heiner Friedrich telling me, in referring to Blinky Palermo, that "each of us knows what time it is in our own lives," and maybe Andy sensed his mortality was slipping and I guess that can be frightful.

How did I meet Andy?  Every time I'm asked that question of questions I feel like I'm stepping into a mine field.  In a copy of a letter John Wallowitch gave me some years back where I'm accused of denying my past whenever it suits me, he came up with this brilliant idea, saying "Look at this!  You should just make it up as you go." (We had a good laugh).

Ken Johnson, writing for the New York Times, accurately characterized Andy as having a "preoccupation with celebrityÂ…. He was interested in famous people simply because they were famous."  Didn't anyone tell Andy that intelligence invents beauty and not the other way round?  You can only be celebrated for so long and then the lights go out and the society pages yellow.  Has anyone read Proust lately?

So many people have asked, did Andy change the world?  The world is still turning, but Andy's not with us.  Anyway, no one is really capable of doing that much unless you're a scientist.  Andy did change the art world.  He did manage to change the way we look at art.  Never before in the history of art, modern or otherwise, has the spectre of an artist after death have so many artworks forged in his name accepted as real and all in the name of the almighty dollar.  George Orwell, who tracked this phenomenon in his own time, reported that "from a totalitarian point of view history is something to be created rather than learned," and no less so in the art world.  Now that's frightening.

Such high jinks not only encourages forgers and fraudsters, but throws a veil over our eyes fooling us into believing that seeing is no longer believing.  Enter Alice in Wonderland.  Photographs lie, as the adige goes, but paintings should not.

Did Andy say anything that stuck with me?  Certainly not the word, Rosebud.  It would take several chapters to make sense of it all.  Where's my agent?!  But I have miles and miles to go before I sleep before anything else.

Even in one of his more prescient moments, while we were screening a canvas, Andy remarked, "how can we make it so it's believable to be accepted as mine?"  When I'd voiced my objection, his response was, "Uhhh, gee, will I get into trouble?"  A couple of years later his karma caught up when a photographer sued for infringement of copyright on her flower photos which he'd casually lifted from a seed catalog.  Maybe that's when he started thinking: Time to make my own pictures.

Maybe what I found objectionable was simply the sanctity bestowed on his aesthetic approach made mockery of the medium and of the sources he mined.  Someone else's vision got usurped in the process.  Phone Cavallo!

Andy might've been mercilous in this regard, except whenÂ—as I recallÂ—the Rolling Stones took his packaging concept for their LP, "Through a Glass Darkly," reconceptualizing it with a photo different from the one he had chosen (which was far better), depicting the group having come down with a pox.  Andy got his first taste of rock & roll jive.  Suddenly the tables were turned.  I didn't hear the end of it.

How would I describe my relationship with Andy?  Well, that's easy.  In a nutshell, simpatico.  What do I think he thought of me?  I think I'm qualified to say he loved me and I loved him, too.  But we never said it in words.  He was forever grateful when I fetched Julia, his mom, and rushed her down to the hospital where he lay dying.

The backstory was that Fritzy (Fred Hughes) was insanely jealous of the rapport Andy and I had.  He even bragged to me once how his biggest goal was to sleep with one of my girlfriends.  In that, he succeeded.  All this negativity and I was a fool not to see it coming.

My favorite Warhol paintingsÂ… well, that's easy.  The Death & Disasters which inspired me to make a series of my own called Thermofax meant as an homage.

What did I learn from him?  "A throw of the dice never never will abolish chanceÂ…" to quote Mallarme, and just to see where it goes.  If I had a chance to do it all over, I'd do it the same.