Lots Going On Through August 17 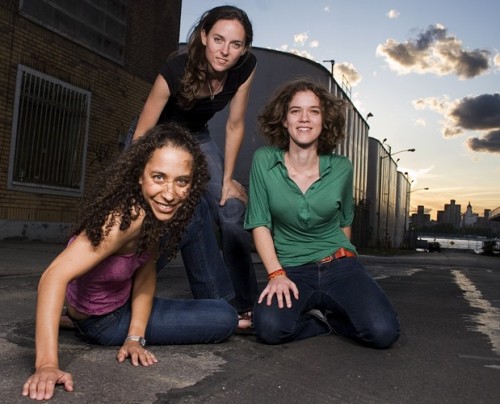 Lots of good, free music is part of the Berkshire Fringe Festival 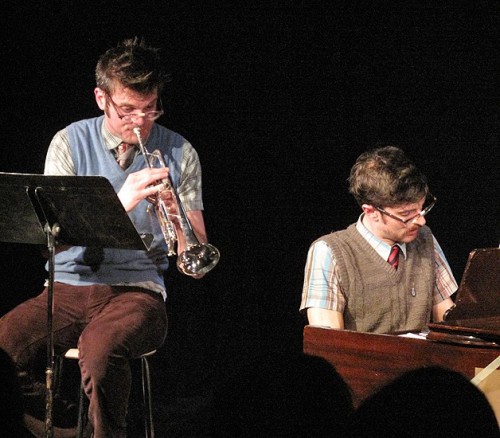 The Gay Agenda uses Broadway musicals as a tool to subvert America. Seen here are Micah Bucey and Nicholas Williams. 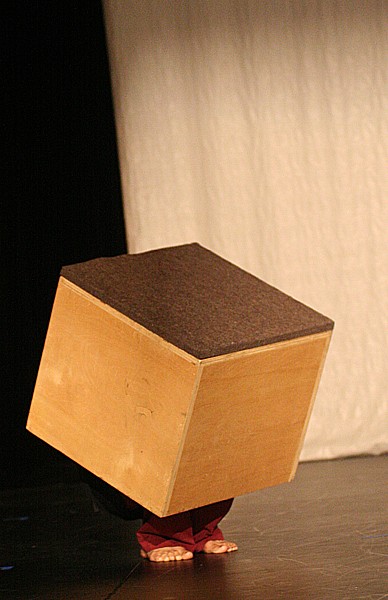 The Disappearing Woman proves thinking outside the box is important. 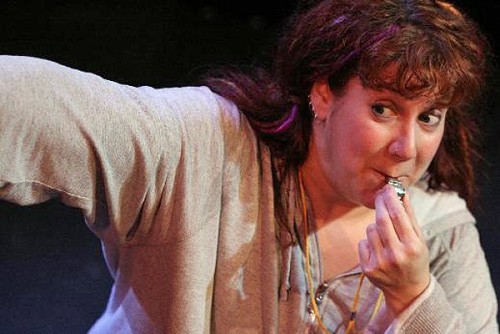 Created by Eliza Ladd and Little Big Tree Productions, Elephants and Gold strikes at the heart of man’s relationship with our planet. 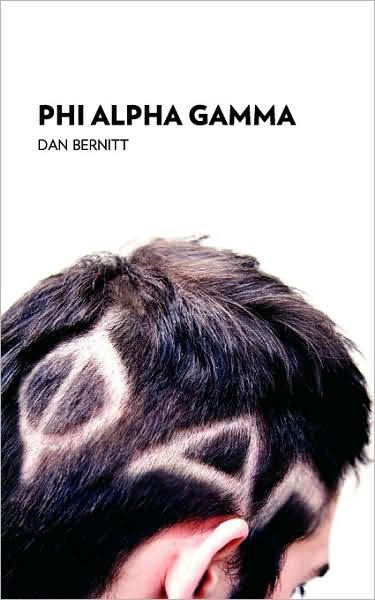 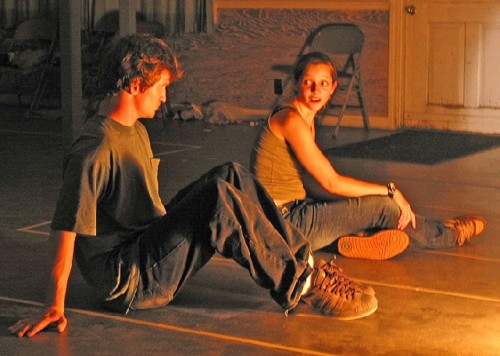 Working a hellish job and maintaining relationships is not a challenge for children in Graveyard Shift. 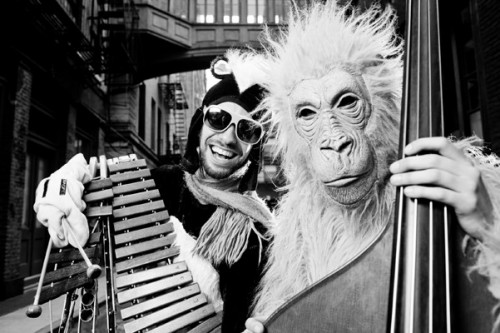 The artists of the Berkshire Fringe Festival take their work very seriously.

Ever wonder what sort of topics speak to younger theater-goers? It's really pretty simple: it's the issues they deal with every day.  The Berkshire Fringe is young, dynamic and has become their unofficial voice. But here's some news: don't stick this three week event into some "too experimental for me" box. You'll see plenty of open-minded grey hair here, too. And everyone's having a great time. Topical theatre can be a lot of fun. Just ask Bertolt Brecht and Kurt Weill.

Bazaar Productions, organizers of the Berkshire's Fringe Festival invite residents to "take a risk and try something new" for a change. For their fifth season, the BFF offers six groundbreaking original works of theater, dance and music by emerging artists from across the United States. The 2009 festival will take place from July 27 to August 17 in the Daniel Arts Center on the campus of Bard College at Simon's Rock just minutes away from downtown Great Barrington.

This season hosts six innovative theater and dance artists from as far away as Minneapolis, and as close to home as Great Barrington. They take on unusual topics like making a living in a rural setting, or gastric bypass surgery, what it means to be human, and the gay agenda. The action-packed three week festival also includes :30 Live!, a free music series; EarlyStages, a showcase of new plays by emerging local writers; and numerous other special events including post-show artist discussions, free community workshops and a world-premiere staged reading of Hurricane Hotel by Berkshire-based novelist and artist John K. Lawson.

Since 2005, Bazaar Productions/The Berkshire Fringe has hosted more than 150 emerging artists including theater companies, dance ensembles and music groups. They have been labeled the 'enfant terrible' of Berkshire theater by the New York Times, because this is the one Berkshire organization that confronts current and controversial political, women's and GLBT issues without blinking.

This years programs reflect aspects of life in America today you will see nowhere else. From an unflinching picture of young, lower-middle class life in rural America, to the struggle with insurance companies over gastric surgery, to horrific gay bashing, these performances often twist and shape elements of art, theatre, music and dance in provocative and delightful new ways.

This unconventional  organization has scheduled six major events and a host of minor ones, all at affordable prices. A subscription to all six costs just $69.00. If that is too rich for your budget, they have also added a Pick Your Own Price Opening Nights! "Make us an offer we can't refuse, or pay what you can," says co-founder Sara Katzoff,  a deal that is valid for each of the six opening night performances throughout the festival.

Here is a rundown of the six shows from their press release.

In addition to highlighting the work of dozens of Berkshire-based artists, the celebration also includes live video mixing, DJ and dance party, an open bar, delicious 'score' d'oeuvres, a paparazzi photo booth and a massive not-so-silent auction emceed by Fringe favorite, Lounge-zilla! (aka Fiely A. Matias). It all happens on Monday, July 27 and the doors open at 7pm. Premium and pay your age tickets are available.

Have you ever laughed so hard for so long that your face hurt?  Because that's what will happen at The Gay Agenda's Great Big Broadway Show!  Micah and Nicolas have been locked in their basement by their homophobic dad for years.  Fed only cookies and original cast recordings, they have created mini-musicals that turn the Great White Way on its head.  Their mission is simple: Complete and utter world domination through showtunes. Come. Listen. Be offended. Songs have never dripped with such innocent sass and biting satire.  You'll laugh yourself gay! Wed 7/29 8pm (Post Show Discussion), Thurs 7/30 9pm, Fri 7/31 7pm, Sat 8/1 9pm and Sun 8/2 6pmâ€¨â€¨

Like the classic conjuring act in which a woman on stage is concealed and then revealed again, so are the dancer's bodies in The Disappearing Woman.  Using gestures inspired by classic imagery juxtaposed against movements invoking the female condition today, the three virtuosic dancers explore how technology folds around us squeezing our interactions into new kinds of abbreviated exchanges. Digital skins at times blur and stifle and at other times accentuate and amplify the woman and their movements.  Media becomes an enveloping, inescapable part of the body itself. Thu 7/30 7pm, Fri 7/31 9pm, Sat 8/1 7pm, Sun 8/2 8pm, Mon 8/3 8pm (Post Show Discussion).

The Ghosts of Gym Teachers Past haunt the Fear of Fitness Centers Present and the Obsession with Weight Loss Future in this new, mostly-true solo comedy about size, sweat and exercisingÂ… your demons. Circumference is largely based on the year Salloway spent trying to get insurance approval for gastric bypass surgery.  Flashbacks take us to her 7th grade gym class where she flunks her Presidential Physical Fitness Test worse than anyone in the history of Cheese Creek Junior High and where Amy is forced into constant, daily interactions with the uncooperative body she insists she long ago "got a divorce from." Wed 8/5 8pm (Post show discussion), Thu 8/6 9pm, Fri 8/7 7pm, Sat 8/8 9pm, Sun 8/9 6pm

The Lambda Award nominated Phi Alpha Gamma is a haunting portrait of brotherhood, masculinity, love and fear embedded in American culture.  Two years after two young men perpetrate a gay-bashing that scars their fraternity's reputation, another member of the fraternity comes out of the closet.  Phi Alpha Gamma focuses a compassionate eye on young men searching for a deeper connection with each other. The story weaves together the voices of four fraternity brothers as they each grapple with the remnants of the hate crime and this new revelation. Wed 8/12 8pm (Post Show Discussion),  Thu 8/13 9pm, Fri 8/14 7pm, Sat 8/15 9pm, Sun 8/16 7pm

In an eclectic love letter to the city of New Orleans, Hurricane Hotel grabs a hold and takes us on a ride into the underbelly of a drowned city destined to be reborn. Adapted from the novel by Berkshire-based artist and author John K. Lawson, this world-premiere staged reading is directed by Aimee K. Michel, and features an original music score by Chris Marianetti (Fragile, 2008) and an ensemble of local actors. One performance only: Saturday August 9, 2pm.

On Sunday, August 16th at 12, 1:30 and 3pm participants in the EarlyStages playwright mentorship program will present staged readings of new works. This is the culmination of a two-week residency where emerging local writers develop scripts under the guidance of Award winning writer Susan Kim. This event is free and will be followed by a discussion with the artists.

Free music series featuring an eclectic mix of new music, emerging composers and sonic innovators from throughout the North East. Takes Place every Wednesday and Monday at 7pm during the Berkshire Fringe.

These free workshops take place on Saturdays at 1:30 pm in the Daniel Arts Center. Each workshop is taught by Berkshire Fringe artists and is open to participants of all backgrounds and levels of experience ages 16-96! Space is limited and early registration is strongly recommended. Workshop Schedule is as follows:

All performances, events and workshops take place at The Daniel Arts Center, Bard College at Simon's Rock, 84 Alford Road in Great Barrington, MA. Tickets are $15 to main events, there is also a "Pick your Own Price" for the opening night performances. There is also a low priced BFF Season's Pass that lets you see all six shows for $69.

The workshops, :30 Live! performances and EarlyStages readings are free.

Major support for the 2009 Berkshire Fringe is provided by The Massachusetts Cultural Council and The Katherine J. Dinardo Fund.