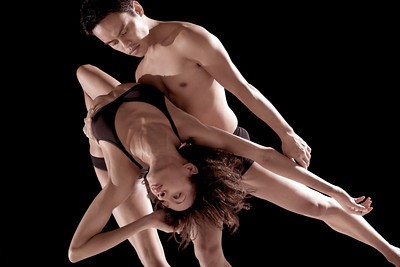 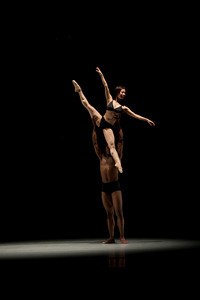 Great art speaks for itself. You don’t need to know anything about the author’s childhood or what other works of art the novel or painting or play might be referring to on stage or on the page. You don’t even need a nitwit like myself telling you it’s good. You just know. You can feel it in your gut.

I get that same visceral feeling standing in front of paintings by Vermeer or Jackson Pollock. Or listening to Beethoven or Wagner or Sleater-Kinney. Or watching movies like “Singin’ In The Rain” or “Bringing Up Baby.” They’re simply amazing.

The same goes for watching dancers like Mikhail Baryshnikov or Diana Vishneva or dance companies like Mark Morris or Twlya Tharp or MOMIX or Trisha Brown. They enchant us. We’re mesmerized by them. They’re so great, they make everything look easy, no matter how difficult the steps are they’re performing on stage.

Armitage Gone! Dance provoked the same reaction Wednesday night at Jacob’s Pillow Dance Festival in Becket. In their one-hour-long performance of a piece entitled “Three Theories,” the group showed why they rightly deserve to have the exclamation point in their name.

Quite simple, “Three Theories” is the best new dance I’ve seen this year - and maybe even in several years.

Choreographer Karole Armitage set out to create a dance based on theoretical physics, according to the program. But you don’t need to know anything about string theory or Einstein’s theory of relatively to be mesmerized by Armitage’s amazing creation.

And before I go any further, let me just say the decision to not decorate the stage and simply have the dancers dance with the plain, wooden barn background was brilliant. There was nothing backstage to distract us from the breathtaking dancing on stage.

The music in all four parts is very repetitive. That might sound like a bad thing, especially if you’re not a fan of Steve Reich or Philip Glass. But the music perfectly suits the dancing, especially in the first part.

Bang features a musical excerpt from Rhys Chatham’s “Two Gongs.” The sound of gongs ringing echoes over and over, the metal clashing sounds flowing from one to the next. And as the gongs ring, the dancers’ movements seem to expand and contract, as if they’re passing an electrical current between them.

I’m not explaining this well. Frankly, if I read about a piece that had gongs playing over and over and dancers expanding and contracting, I’d run for the exit. But abstract art has always been hard to describe because it often doesn’t mean anything. And yet, I actually got what I think Armitage was trying to convey in the piece. In my mind, the first part had something to do with the Big Bang Theory of how the universe was created. I may be wrong. In fact, I don’t really care if I was right. All that mattered to me was Armitage got my brain working and engaged me immediately - something that’s always exciting and exhilarating at any live performance.

The best way to describe the gong section of “Three Theories” is its like listening and watching a ripple on a pond expand outwards and inwards over and over. Or better yet, picture the dancers being sound waves come to life. Or think of Armitage as an anarchist throwing a rock in the water, disturbing our peaceful lives.

Instantly, I was hooked.

The second part, Relatively, refers most likely to Einstein’s famous theory. But I wasn’t thinking about Einstein as the dancers moved sinuously to the Indian-sounding music. Instead, the second section reminded me more of two-dimensional shadow play puppets come to life. And again, there was that sense that the dancers were passing a powerful energy force from one to the other. Either that or I’ve just been living in hippie dippie Western Massachusetts for too long.

The third section, Quantum, was the only minor slip in the piece for me. That had to do mainly with the music, which was a slightly-less inspired electric guitar sound repeated over and over. But again, the dancers dazzled me with their sharp, angular movements. Here, the flow of energy seemed to be less ripple like and more like something being whirled around, as if the dancers were holding on for dear life to one of those spinning rides in a school playground kids beg adults to spin faster and faster.

The Relatively section of “Three Theories” also featured several dancers paired together. The best pair hands down was Luke Manley (look for the curly blond haired guy) and Abbey Roesner (the lanky, black-haired dancer). They only dance together for a few brief moments. But they make their mark with sharp, spider-like movements which brought the energy level of the piece to an even higher level.

Extra recognition should also be given to three astounding dancers throughout the performance: Kristina Bethel-Blunt, Emily Wagner and Masayo Yamaguchi. But to be honest, all 11 dancers were amazing as certain moments during the show. This is not a star-centered dance company. They're like a great baseball or soccer team. All of players work together to create a single, powerful, unstoppable force.

Lighting designer Clifton Taylor also deserves credit for bringing an extra spark to the Relatively section of “Three Theories.” His sparse but powerful lightening made the dancers movements stand out even more.

The final section, String, featured all the dancers in white and several notes on a piano played again and again. Again, the dancers moved like there was a strong electrical current surging through their bodies and being passed from one to the other.

What did the dance mean? Who knows.

All that mattered was the energy created on stage was directly transferred to the transfixed audience seated before them. I like to think of it as The Armitage Formula.

(Armitage Gone! Dance performs “Three Theories” at Jacob’s Pillow this Thursday, Friday and Saturday at 8 p.m. as well as Saturday and Sunday at 2 p.m. For more information, visit www.jacobspillow.org or call (413) 243-0745)

(Side note. Every summer, Jacob’s Pillow Dance Festival presents hundreds of free performances outdoors on its Inside/Out Stage. The open stage overlooking rolling hills is one of the things that makes Jacob’s Pillow such a truly remarkable place. The stage must be rebuilt. The cost of the project is $100,000. The money to rebuild the stage must be raised by the end of August. To make a donation or for more information, visit

www.jacobspillow.org/savethestage
Back to Dance Section Home