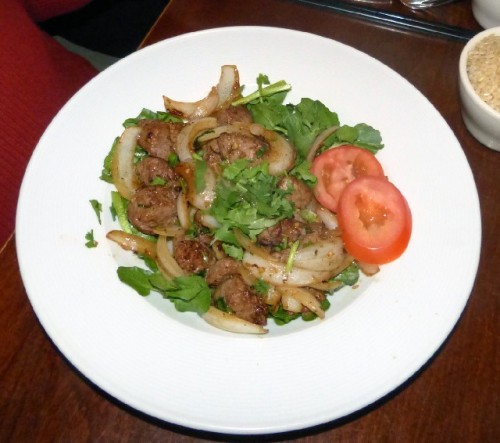 The Shaken Beef had the odd ingredients of watercress and sliced tomato for color. 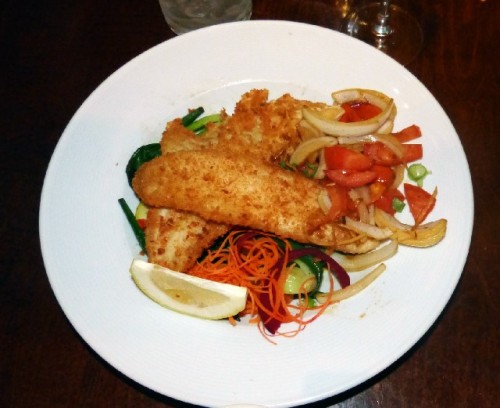 The talapia was crispy with a perfect medley of vegetables. 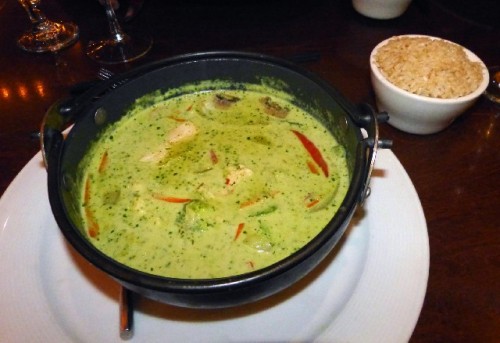 Served in a iron pot this was less curry than green soup with underwhelming ingredients. 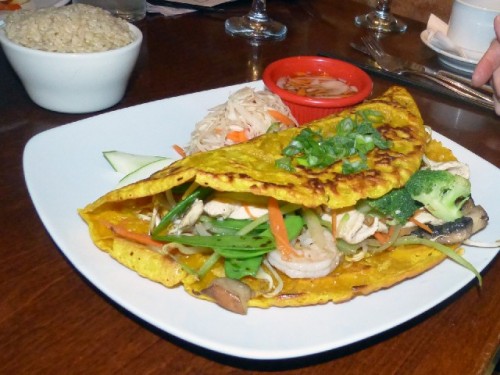 The crepe was more like a deep fried thick taco.

Initially this large restaurant opened as Jae’s Spice which has since relocated to a mall between Lenox and Pittsfield as Jae's Asian Bistro.

Mostly with the same décor and food theme it then evolved into Spice Dragon. This is a confluence of its former identity as Spice Dragon and the relocation of Dragon a popular restaurant a short drive from Pittsfield.

Visiting the old and new restaurants in the same prime, downtown Pittsfield location evokes the sense of plus ça change, plus c'est la même chose.

In high season it  is a popular destination both before and after theatre. There is a late night café menu for snacking.

Overall the food and ambiance are attractive but there can be inconsistencies both in the menu as well as service which, on a busy night, can grind to a snail’s pace. Even a less busy night can be slow because of inadequate or inexperienced staffing.

Often it seems there is lack of communication between front of house and the kitchen.

This was often the primary issue with Jae’s in its former as well as current incarnation. It is an issue with its replacement Spice Dragon as well.

The ambiance is superb and leads one to anticipate an upscale Asian fusion experience. The moderately priced menu is targeted for a high turnover of tables. That is a different business plan from the smaller, more pricey restaurants in Lenox which cater to an upscale Tanglewood clientele.

On a good night Spice Dragon delivers while on an off night, well. During one visit our table of four just gave up and left after a twenty minutes interval trying to flag down a waiter and then another endless wait for appetizers.

During this visit with our friends, Harry and Linda New Yorkers who summer in the Berkshires, we had a mostly positive dining experience. They are avid foodies who often dine out. In addition to Spice Dragon they discussed some of their favorite dining options in the region.

Cisco: I had the usually reliable Green Curry with chicken ($14.95). It proved to be so watery that it was actually more like a green spicy soup. It was utterly disappointing, with a general lack of ingredients, and a total disaster. I would not order it again.

Linda: I had the tilapia presentation. (Ca Sot Ca Panko Crusted Tilapia Topped with Caramelized Onion, Tomatoes, Mango, Ginger, Scallions Nouc Nam Sauce
Seasonal Vegetables 16.95)  It was terrific. The fish was crispy on the outside and tender on the inside. The surrounding vegetables were not overcooked. They were fresh, crisp and very tasty.

Our seating in a booth was perfect and the service was good. The décor makes it feel special and overall Spice Dragon was a very positive experience. We have not been here before and yes, we definitely would come back.

Harry: Correction. We have been in this building when it was Jae’s Spice.

I thought the filet mignon (Shaken Beef, $19.95) was excellent. I liked that all of the pieces were bite sized. They were crispy on the outside and nice inside. The vegetables were good. It was a very nice sauce and not too salty.

What I don’t like about Asian restaurants is the way the food is cooked which is aerated. So you smell the food all through the restaurant. The oil rises and right now I smell all the oils in the air. I don’t care for that. So I go to very few Chinese restaurants. Most are mediocre and there are only a few that are really good.

I’m not a big fan of Japanese food but I do like Vietnamese food. It’s the aerated oil that bothers my nose but I thought this food was very good. Presentation was good. Would I come back? Yes.

Arni: I had the Vietnamese Crepe ($16.95) which is actually, I am sure, deep fried for the shell. The norm is pan fried. This time the crepe was too hard. It can be very thin and very crispy. This version is too Americanized. I liked the fact that there were lots of vegetables inside but they were American not Asian vegetables. I would have liked more sense of shrimp or chicken and what was missing were bean sprouts.

Harry: That’s an interesting comment as the filet mignon came with watercress. That’s not an Asian vegetable. You would expect bok choy. Watercress is English and I actually like that. Because I like watercress. But it wasn’t very Asian. This is Asian Fusion.

We always critique restaurants when we go out from A plus down.

For Spice Dragon I would say B plus. Which is a good rating. Not great. A plus would be Old Inn on the Green in Marlborough (Route 57, New Marlborough, MA 01230). That’s south of Great Barrington. In my mind that’s the best in the Berkshires.

We love going to Rouge in West Stockbridge. Mostly for the ambiance. It’s a very popular bar and restaurant on a little side street. It has good food with large portions and a very friendly staff. We also often eat in the bar at Zinc in Lenox. We like Cafe Lucia in Lenox. We have tried Nudel’s in Lenox but find it a little pompous. A little pretentious. No, a lot pretentious. The food is good but I don’t find the space attractive. We like Brava in Lenox which is a new tapas bar. Very fun and very good food. Last night we ate at Allium which has a new chef. They support local food producers and it’s very good food. They name the farms the food comes from and I love that.

Cisco Do you ever do the high end restaurants like Blantyre?

Harry Never. It’s not the price or the quality of the food. It’s the pomposity. Everyone it too formal. There’s a haughty attitude.

Arni Some years ago I was at a restaurant and I commented to my companion that the wait staff is fancier than the guests.

Harry At Cranwell we eat at Sloan’s Tavern. It’s casual and we never eat at the big restaurant.