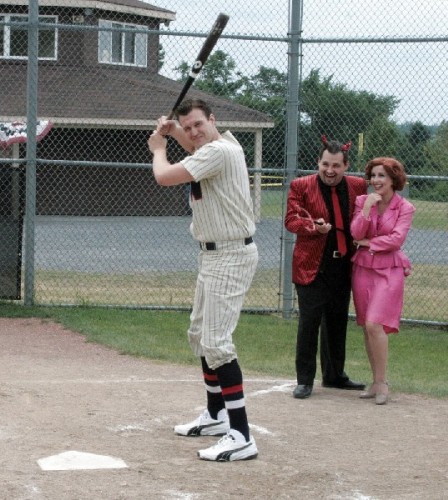 Swinging for the fences in Chatham, New York.

.       Joe Boyd is the biggest fan of the losing Washington Senators, so when the mysterious Mr. Applegate offers him the chance to help them win the pennant, Joe is all for it – but only if there’s an unheard of “escape clause” in the deal. Joe Hardy shows up at the Washington Senators practice and starts hitting homers, but his lack of shoes that fit – and any past playing record - raise suspicions for sports reporter Gloria.

Joe revels in the team’s success and his new found fame, but he’s lonely for Meg and even Applegate’s all-star distraction, Lola, can’t keep his mind away from home.  As the pennant race heats up, so does Gloria’s investigation, leading to a trial to see if he’s really “Shifty McCoy,” who threw a game in the Mexican League many years ago. Thanks to testimony from Meg and her friends, he’s declared to be innocent Joe Hardy, but the trial prevents him from escaping before the time expires.

Joe assumes his soul is lost forever over a World Series pennant, but at the final World Series game Applegate (who only wanted the Senators to get their hopes up, not win) furiously changes Joe Hardy back to Joe Boyd. Joe Hardy makes a game-winning catch and is never seen again.

You can bet you’ll have a ball at this pennant-wining hit, filled with songs that are still popular favorites: “Whatever Lola Wants, (You’ve Gotta Have) Heart, Two Lost Souls, Those Were The Good Old Days,” and snappy and sizzling Bob Fosse dances.

Jon Reinhold (Gaston in Beauty and the Beast) stars as home-run slugger Joe Hardy and is every six-foot, four-inch a big league ball player, with a rich baritone to croon songs like “Goodbye Old Girl.”  Monica M. Wemitt (Mrs. Potts in Beauty and the Beast, Dolly Gallagher Levi in Hello, Dolly!) is Meg Boyd, puzzled over her husband’s disappearance but trusting in his return. David Bondrow (Jacob/Potiphar in Joseph and the Amazing Technicolor Dreamcoat) will put delightfully evil touches on the role of Mr. Applegate. Andrea Doto (Bonnie in Anything Goes) sizzles with perky singing and dancing as Lola.

Good seats are available for Damn Yankees, which is suitable for all ages and great family fun, July 22 through August 1 at The Mac-Haydn Theatre in nearby Chatham, NY.   Fully air conditioned; discounts available.  Performance times and ticket prices vary: visit www.machaydntheatre.org    or call 518-392-9292 for more information; make your reservations at 518-392-9292.