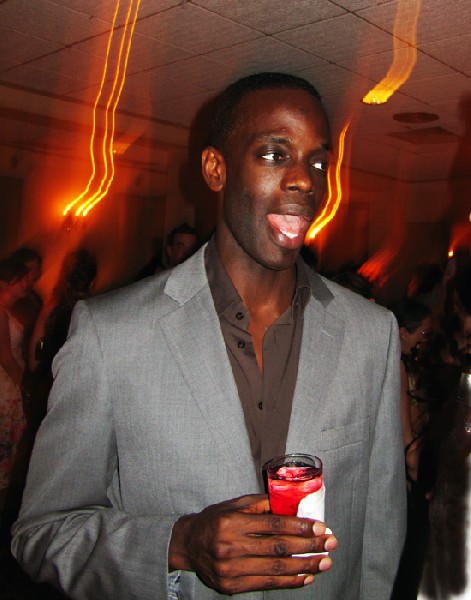 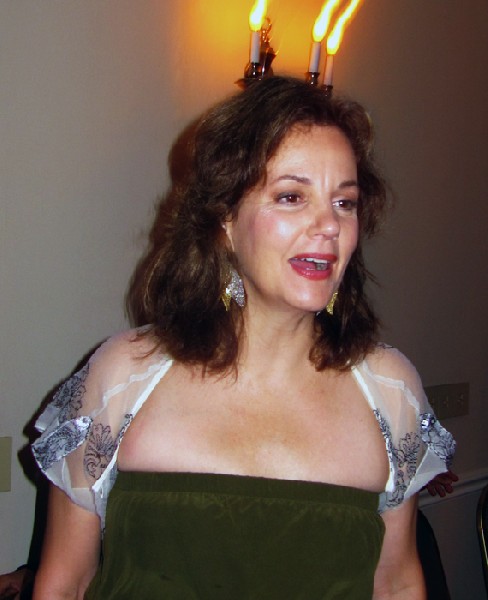 Margaret Colin bears an uncanny resemblance to Stockard Channing who earned an Oscar Nomination for her Ouisa. Giuliano photo. 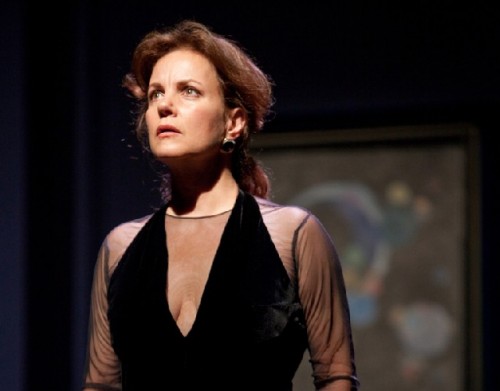 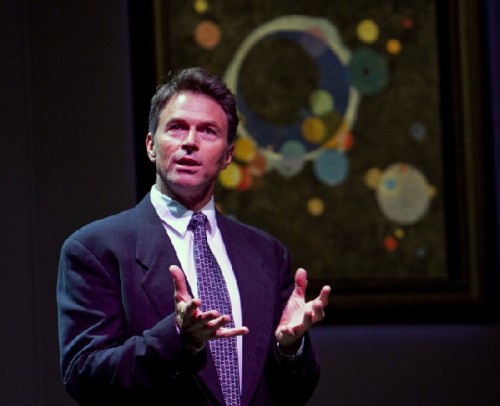 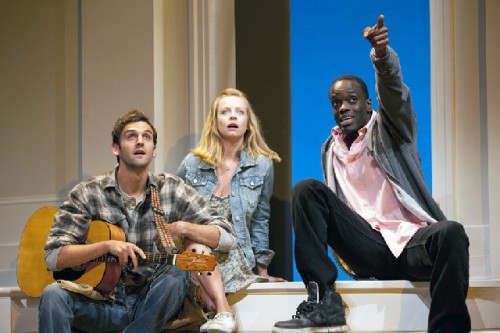 Paul in Central Park with hippy friends points up to the window of the Kittredge family on Fifth Avenue. 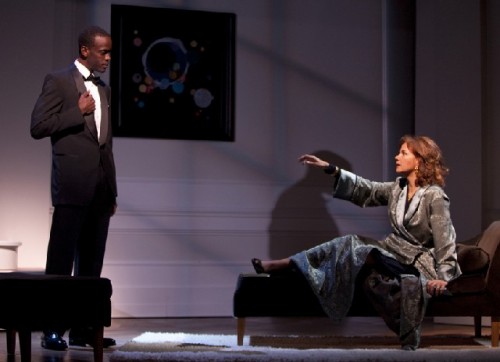 In a fantasy sequence Paul begs Ouisa to take him to an opening at Sothebys.

Recently we watched the 1993 film Six Degrees of Separation for the second time. Last night we attended a Williamstown Theatre Festival production of John Guare’s 1990 play.

However implausible, engaging, inventive and witty the plot it was apparently inspired by a newspaper report that Guare had read several years earlier. He hadn’t intended to use the material but it evolved as he began writing a play. He had been carrying the idea around inadvertently for some time.

There was an incident in which a young black man, well dressed and impeccably mannered, insinuated himself into the apartments of upscale New Yorkers. He landed on their doorsteps the apparent victim of a Central Park mugging and stabbing.

Paul (Ato Essandoh) targeted their specific homes because he stated that he knew their children from Harvard where he was allegedly an undergraduate.Professi They are surprised at the many details he knows about them including nick names. He had milked this information from one of his tricks. Over three months, in exchange for sex, he had been tutored by this ersatz professor Higgins in aspects of the lush life.

He gushed at recognizing the double sided canvas by Kandinsky owned by Flan Kittredge (Tim Daly) a private art dealer.  Flan (short for Flanders) and his wife, Ouisa (Margaret Colin), short for Louisa, are at home preparing to go out to dinner with their friend and potential business partner/ collector the South African Geoffrey (John Bedford Lloyd).

Paul has been stabbed and the first order of business is to prevent him from bleeding on their white carpet. Then Flan binds his wound. Politely Paul asks if he is interrupting anything. He is about to leave but has no place to stay until early the next morning. They offer to put him up for the night. He has a reservation at the upscale Sherry Netherland Hotel which he glibly refers to as the Sherry.

There to meet his father, an actor. He is coming to town to start casting for a film version of Cats. Their curiosity is aroused. It seems that he is no ordinary actor/ director but in fact the legendary Sidney Poitier. This prompts Paul to spew out reams of information about his father including the complete film credits and dates. As well as intimate family information. It seems he is the son of a first marriage. After the divorce he and the siblings of this first family mostly lived abroad. In passing Paul mentions glibly that he is more familiar with Rome, Paris and Zurich than New York.

His hosts are captivated, as are we. The role was performed brilliantly in the film by Will Smith. It proves to be an inspired and challenging character for Essandoh. As it was for Smith this is a performance that may advance the career of Essandoh. It is the glue that binds together the plot line and convergence of characters reacting to aspects of an elaborate con game.

If Essandoh compares favorably to the remarkable performance of Smith that is not as true for the other primary characters.

Donald Sutherland portrayed Flan with his usual, over the top, scene stealing legerdemain. He is such a diverse and talented actor but needs the firm hand of a director to keep him from running amuck. As usual, he was over the top in portraying a private art dealer hovering between wealth and poverty. His fortune hinged on the outcome of the deal in question to sell a Cezanne. He needs Geoffrey to come in with $2 million to buy the painting which is to be sold to a third party. Stockard Channing received an Academy Award nomination for her performance as Ouisa.

Early on in the one act evening in Williamstown it was obvious that there were issues. Where the film acted out scenes the play often has Ouisa and Flan describing them in narrative asides. So there is a constant shift in their acting and other aspect as narrators. We are accordingly asked to accept scenes and actions that were literally performed in the film.

This might have worked but I found Flan (Tim Daly) in particular to be rather generic. He is supposed to be a hustler and con artist in his own way. In that sense a matchup for Paul by whom he is duped and snookered. It provoked outbursts from Sutherland with comic impact. While the responses of Daly were flat.

When she first appeared on stage one was struck by a physical resemblance between Colin and Channing. She also played the part in a similar manner eventually becoming enraged and disenchanted with the duplicitous wheeling and dealing of Flan. This erupts at an upscale dinner party which we see in the film but is alluded to on stage. Ouisa storms out denouncing her marriage to Flan. This leads to a telephone seduction by Paul who is now on the run from the police.

The plot, as spun by Guare, becomes as convoluted as a Restoration comedy. There is a parade of actors on the stage. Including a totally nude hustler (Drigan Lee) whom we first encounter going down on Paul. There were warnings about this posted in the lobby but nobody in the audience seemed to mind.

Then there were the kids, the children of Flan and Ouisa. Two at Harvard and one at Brown. You have to sell a lot of art to afford all of that tuition. Their daughter announces that she will first marry and then climb mountains in Afghanistan. There are the undergraduates of their friends who are also caught up in Paul’s con, as well as, the nasty son of a doctor whom Paul duped.

All of these many characters have their moments in the spotlight with varying levels of success. Overall, their presence is felt more on stage than in the film.

The action is played out in the apartment designed by Antje Ellermann. While efficient to the needs of the play it is surprisingly bland. This is surely not an accurate depiction of the abode of an art dealer and collector. One would expect a lot of clutter with walls densely hung and other objects scattered about. Instead we are presented a sterile, neo classical interior with off white dominating.

There is that one defining object. The double sided Kandinsky hung in such a manner that from time to time it spins about. As the only focus of our attention it is over played as a plot point in the design concept.

This proved to be an amusing and diverting evening of theatre. But it was played as a light comedy. Both the film and play represent a period piece and cameo of the lifestyle of the glitzy but shallow upper middle class in New York. In a parody of the fact that their kitchens are mostly used to make coffee and cereal in the morning Paul offers to create a gourmet meal. He raids the cupboards to concoct pasta to die for. What a cunning spoof on home cooking. Just how did Paul, a clever street hustler, acquire those culinary skills?

There is a darker side to Paul which is just hinted at. Just what was his motive?  It appears he never stole anything or inflicted threats and bodily harm. There is remarkable cleverness and talent in his elaborate deception. Given support and resources he might have succeeded on his own. In that final phone call to Ouisa this is what he wants from her. As well as sex. There is the post script almost as a throw away that a young black man has hung himself on Riker’s Island. Is it Paul?

This production might have probed more deeply into that darker aspect of this tale. What is presented as a comedy may indeed be a tragedy.