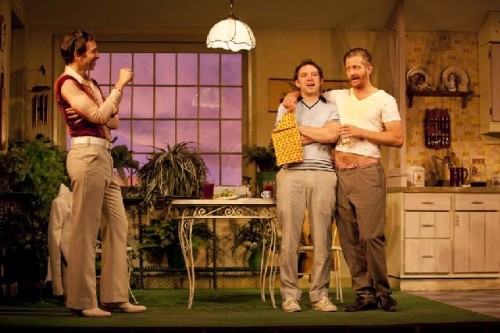 The conflict between the brothers revolves around competing for the attention of the agent played by Stephen Kunken. WTF photos by T. Charles Erickson. 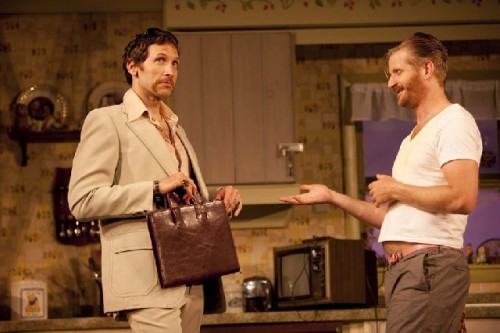 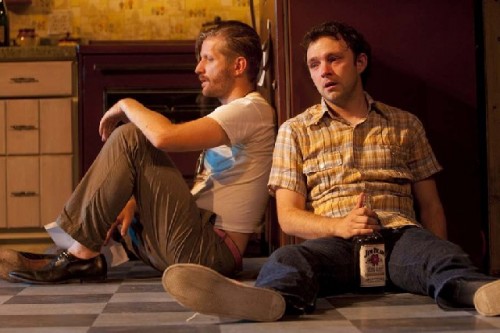 Austin (Nate Corddry) and Lee get down and dirty. 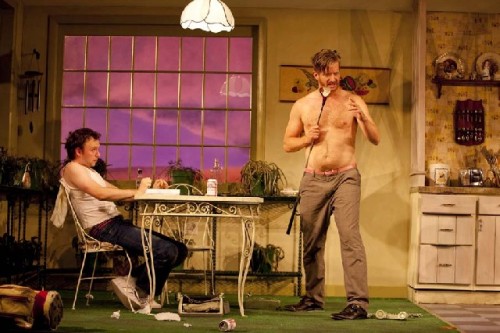 Working on the script. 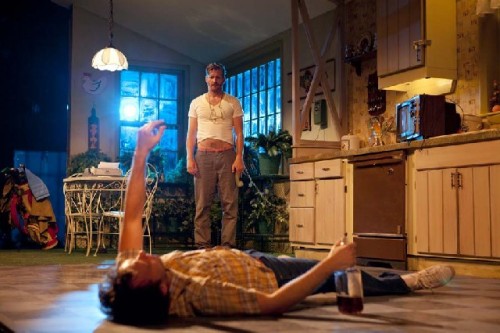 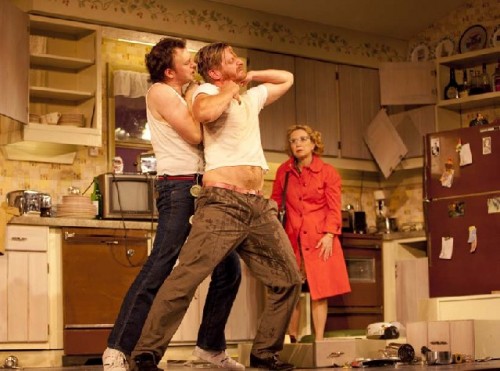 At each other’s throats as Mom (Debra Jo Rupp) looks on with apathy.

The 1980 play "True West," which opened at the Williamstown Theatre Festival last night, starts rather slowly. It takes some time to establish the antipathy and tension between the brothers; the scholarly, creative and Nerdy, Ivy League graduate, Austin (Nate Corddry), and his fractious, alcoholic brother Lee (Paul Sparks) who is a vagrant and thief. Nothing appears to connect them to the same parents; an alcoholic, pathetic father, whom we never meet, and a ditsy Mom (Debra Jo Rupp) who makes a surprise entrance in the second act.

It takes the entire first act to establish that while Austin is brilliant it seems that Lee is his match with manipulative street smarts. There is the contrast between one grounded and successful brother and the destructive, shattered sibling. In the second act, which flies by in a manic blur, literally, all hell breaks loose as we are put through a roller coaster ride of action with an abrupt, cliff hanger conclusion. This is a chronicle of the most vicious and destructive fraternal combat since Cain slew Abel way back when.

Initally, there was a mismatch between the restrained and underplayed acting of Corddry who risked being blown off stage by the overplayed performance of Sparks. As the action moved into high gear in the second act the actors were toe to toe, eyeball to eyeball, trading shots in a stunning reversal. In their final death struggle it was a complete surprise to find just who had the upper hand.

This production had our attention even before the play began. We started the evening contemplating the back of what appeared to be a ranch house in a California suburb, on the edge of the Mojave Desert, somewhere about 40 miles from LA. A crew of Ninja stage hands emerged and rotated the house to reveal a modest home. Behind the house, designed by Neil Patel, was a backdrop signifying, like a Georgia O'Keeffe painting, the undulating line of sand dunes. There were enormous light elements by Ben Stanton that were raised and lowered to signify the passage of day to night. Scenes were also marked by brilliant musical intervals designed by Darron L. West including fragments of Country and Western Music. Was that a bit of Hank Williams we heard? Or was it Jimmie Rodgers?

Yet again the production values of  WTF proved to be just extraordinary. There is such amazing attention to all aspects of theatre. While it is often felt that WTF is somewhat elitist there is also the strong sense of bringing the highest standards of New York Theatre to the Berkshires. It is a lot more convenient to drive to Williamstown once a week in season than commute to Manhattan. Not surprisingly WTF productions regularly move to Off Broadway.

In many aspects Sam Shepherd represents a contemporary paradigm for American Theatre. He has been to the West and its cowboy, rugged, macho culture what David Mamet has signified for urban corruption and social disease. If Mamet is East then Shepherd is West. Arguably, in this contrast they are our most interesting living playwrights in the effort to define American culture at its most extreme.

A sub theme of this drama is that the brothers are both engaged in attempting to write screen plays. Austin is working on a love story while Lee has an idea for a contemporary Western. In the absence of their mother, on vacation in Alaska, Austin has been invited to house sit and water the plants. During a time of what he thought would be solitude and seclusion he intended to work on a script. The vagrant brother, Lee, arrives unexpectedly and disruptively. He has wafted in from the nearby dessert which tests his rugged survival skills. He is a dessert rat more by necessity than choice. H wants to borrow Lee's car to drive around at night and loot some homes.

The tension builds as Austin attempts to concentrate on writing. Lee, who is jealous and self absorbed, amuses himself by annoying and distracting Austin. But Lee appears to be just as irritated by the sound of the frigging crickets.

Because of an important meeting with his agent Samuel Kimmer (Stephen Kunken) Austin reluctantly agrees to lend his car. He wants to get rid of the embarrassing Lee. Lugging a stolen TV Lee arrives home in time to intrude on the meeting. The agent is wonderfully dressed as a slick dude, probably gay, in a mod Western outfit nicely designed by Linda Cho. He conveys a smarmy show biz demeanor. Soon he is being hustled by Lee who ensnares him into a round of golf which proves to be the fulcrum that turns the plot.

Matching wits with Austin it seems that Lee has his own ideas about a story to pitch to Kimmer. While Austin is inventing a script Lee has lived the life. In this aspect a signifier for Shepherd and his own cred to tell the tale of the "True West" post Cowboys and Indians.

There was a wager during the ensuing golf game which Lee won. It entails a deal that Kimmer will accept and pitch Lee's story. Three studios are hot on the idea with a potential $300,000 advance. The glitch is that he can't type let alone write. Instead, Austin is roped in (a neat Western analogy) to write the script. It also appears the agent is dropping Austin's project, or shelving it temporarily, in favor of Lee's.

Here the reversal begins. If Lee insists that he can write then Austin argues that he can break and enter houses. Slowly they devolve as Austin gets more and more fixated and frustrated with trying to write and Lee lurches out to rob houses.

To celebrate their new career path they open one of Mom's bottles of champagne which Austin follows with hard booze. The agreement is that Austin, by now completely plastered and deranged, will bring home toasters as proof of success. The toasters lead to toast, which goes flying in a manner that stuns the audience.

Madness prevails as Austin trashes the set looking for a pen to take down a message while on the phone. In their ever more intense conflict all decorum evaporates. The stage Ninjas, between scenes, redress the set. Mom's plants are all dead and there is trash everywhere. Well, boys will be boys.

Enter Mom back from Alaska, holding two suitcases, with a magnificent comic touch. It is just hilarious as she surveys her utterly destroyed home in a deadpan manner. She is presented with such restraint that it works as a foil for the now flat out combat of the brothers. She has just fabulous lines as her sons are trying to kill each other to which she responds with apathy. Mom is far more upset by her neglected and now dead plants.

Is this indeed the True West? Well, we hope not. Yes, it is A West but without much of a clue as to how definitive it claims to be. While I found this play to be completely absorbing it may strike others differently. A friend commented that she found it too disturbing and violent. Many left comparing notes on their own sibling relationships. Again that Cain and Abel thing. In than sense Shepard writes plays of Biblical proportions.