Pepon Osorio Drowned in a Glass of Water 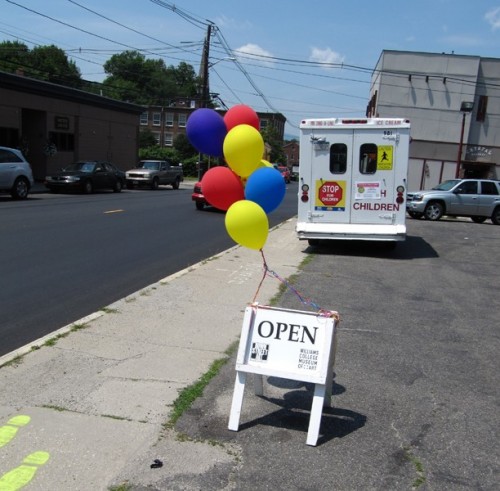 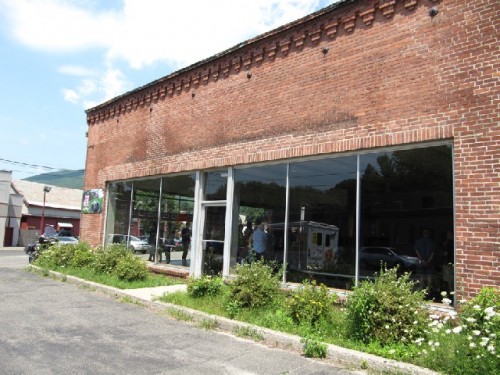 The abandoned car dealership on Route Two in North Adams. 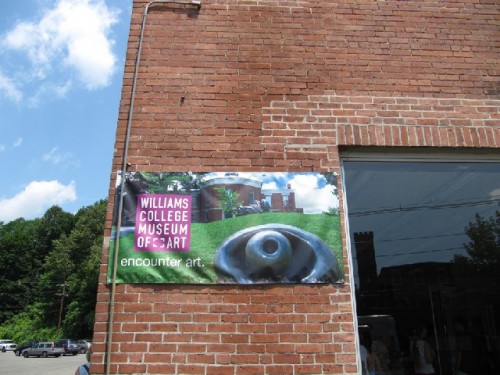 A sign next to the entrance of the exhibition. 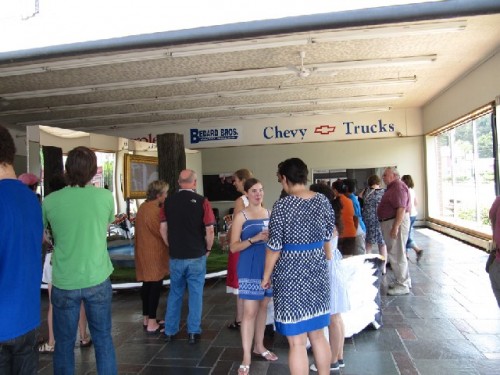 Entering the space we found a crowd of local visitors. 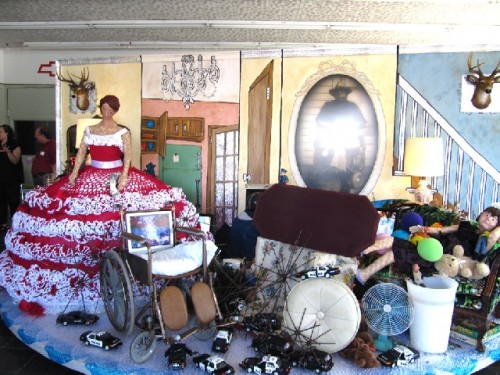 The installation evokes associations and memories. 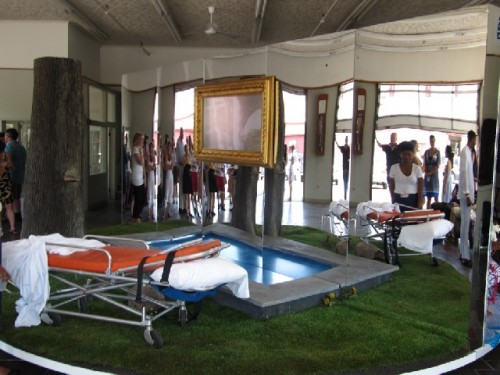 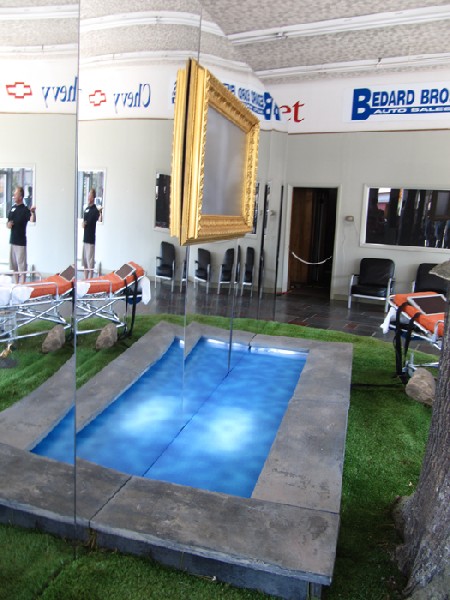 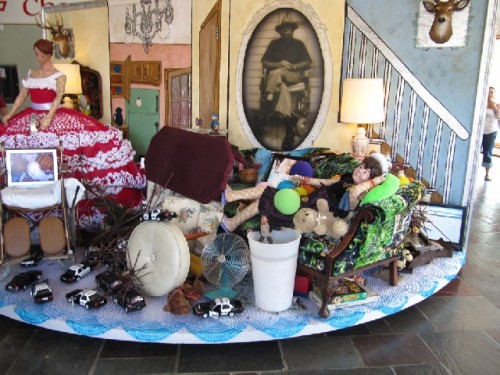 A detail of stuff. 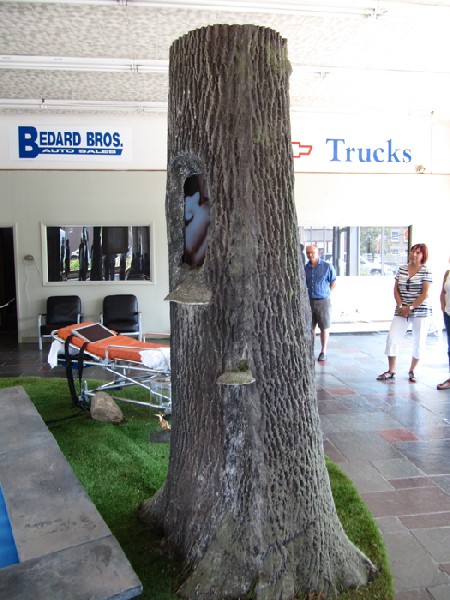 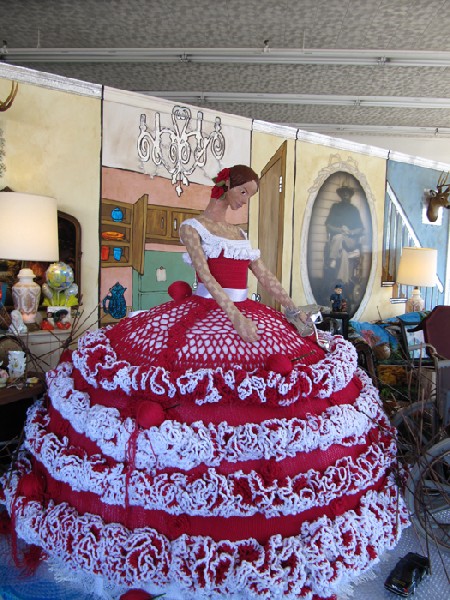 The dress was created by local collaborators. 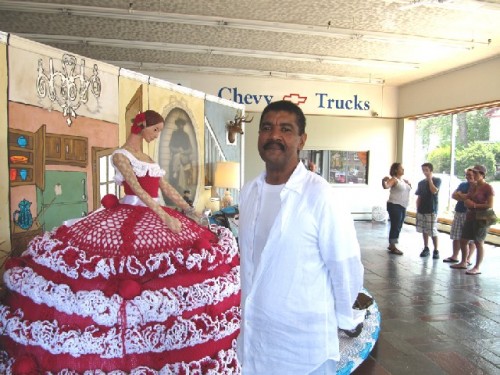 Pepon Osorio and his installation in North Adams. 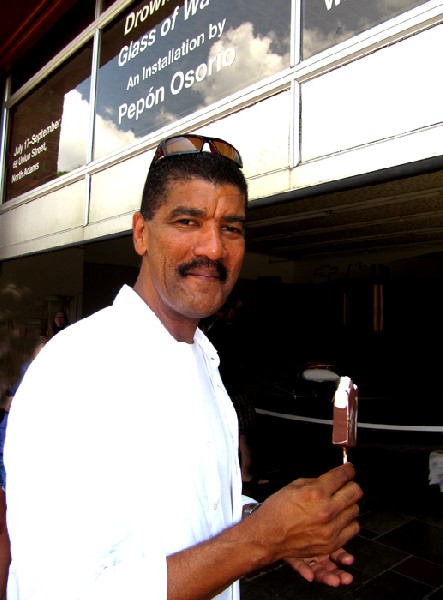 The artist enjoying an ice cream on a summer day, 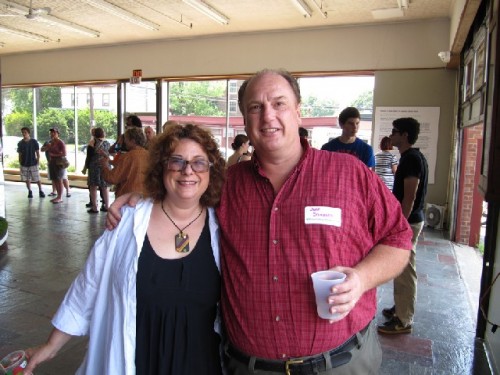 Lisa Corin and John Stomberg of the Williams College Museum of Art. 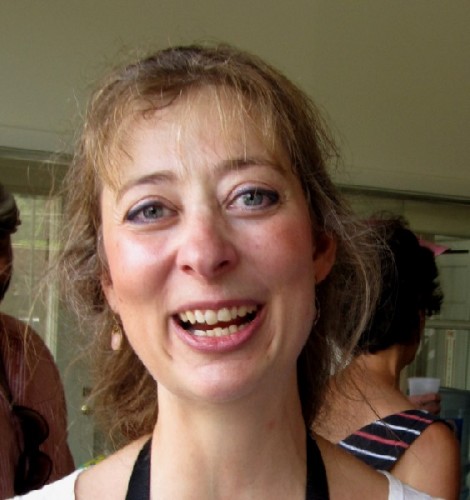 Cynthia Way was the curator for the project which moves to the museum in the fall.

The practice of the artist Pepon Osorio entails the notions of Social Sculpture that started in the Post War era with the German artist, Joseph Beuys.

Under the sponsorship of the Williams College Art Museum the artist visited with the curators and staff over several months. This entailed meetings and dinners that extended into the community.

Eventually, the Puerto Rican born artist focused on two families. For the sake of privacy their identities are not revealed. He exchanged stories and family histories.

From this evolved an installation in a former car dealership in North Adams. It is a part of the summer long DownStreet project.

There is a large carousel in the center of the room which slowly turns.  It is divided into two sides with a wall in between. Both sides entail displays of disparate objects that the artist hopes will evoke our own memories and narratives.

The eclectic assemblage of found objects is seemingly random but, as an ensemble, evocative and redolent of  associations. Some of the pieces are exotic. For example, a life sized, female mannequin with an elaborate crocheted gown. It was created by a team of community based collaborators. It recalls the generic kitsch of similar objects of more ordinary scale. If that specific object attracts attention and critical commentary most do not.

The primary visual impression for the casual visitor is a bunch of junk on a pedestal.

The fact that this is embedded directly into the community creates an interesting notion of context. It is hoped that local residents will come and see the work and make up their own minds.

In the fall the entire piece will be carefully packed up and transported to the Williams College Museum of Art (WCMA). In that context it will instantly morph into art. The notion is that if it is displayed in a museum then ipso facto it must be art.

Its status as art will be unassailable. But as installed in an abandoned car dealership its bona fides as high art, or any art for that matter, are in question.

The average citizen is unlikely to be familiar with Marcel Duchamp’s ennui about retinal art. And his preferences that evolved into conceptualism. Which fast forwarded to the social sculptures that inform Osorio. That is far too much theory to absorb.

But it is likely to evoke a thought process. It is surely a stretch from the easy art that comprises most of the DownStreet displays. Having this project from Williams nicely ups the degree of difficulty. It sets the bar higher by creating a more complex discourse.

This is such a witty means of framing the whole town and gown standoff between snooty, up scale, know it all, academic Williamstown, and Joe Six Pack, hard scrabble, working class North Adams. It is likely that the local citizens, who stumble in out of curiosity to see the stuff in North Adams will never, ever set foot in the Williams College Museum of Art.

Perhaps this exhibition will convince them why there is no need to bother. And if one cent of tax payer dollars were spent on this project we would never hear the end of it.

It was intriguing when Lisa Corrin, the director of WCMA, discussed the project and how the decision was reached to create this provocative, site specific work of art.

Corrin told me that no sitters have been hired. Instead, every staff member of the museum has been asked to commit two days of sitting in the exhibition. The museum staff will engage visitors in as dialogue about the work. She told me, with a twinkle in her eye, that she will also sit for a shift. Talk about commitment.

We wanted to know if there will be more such projects between the museum and North Adams? There is a lot of cheap real estate available. When Tom Krens was the director of WCMA he initiated the project to turn the abandoned Sprague Electric campus into Mass MoCA.

Since then we have shelved that notion of vast former industrial spaces transformed into museums. Some of the mills now house artist lofts and galleries but the downturn in the economy has soured further development. Is it time to revisit the vision Krens and others shared about renovating all that empty space for arts related activities?

“I’m not interested in Colonialism” Corrin responded succinctly. “Tom Krens was an Empire builder but I’m not.”

Corrin stated that given her mandate and budget, reduced by 28% this year, she is not interested in being responsible for any more real estate. But on a project by project basis she would explore possibilities. The North Adams installation happened in this instance precisely because it fit the nature of the artist and his practice. There was also the chance to collaborate with DownStreet. But she does not feel that this implies an ongoing commitment.

Having WCMA and the Clark Art Institute as neighbors evokes enticing possibilities for collaborations with North Adams. In its ten years of operation Mass MoCA has reconfigured the city as an arts mecca. But many feel that this is just the end of phase one. What remains is to connect the dots, involving the city, and expanding on the synergy that exists between the three museums, WCMA, the Clark, and Mass MoCA.

As Corrin emphasized her first responsibility is to the college and its community. She pointed out that all of its exhibitions and programs are free and open to the general public. Working with Joe Thompson, a Williams graduate, she and the museum played a significant role in partnering with Mass MoCA in the Sol LeWitt project.

In her view she and the museum have done a lot for Mass MoCA and the City of North Adams.

Yes but, as we enter the next decade of Mass MoCA, under the leadership of a new Mayor, Dick Alcombright, and a more involved and energized community, the challenge is how to get Mass MoCA and its world class art to reach beyond its campus and become a part of the city.  Having major works of art sited around the city would create threads into the community. Beefing up DownStreet, with the enticing Pepon Osorio project, is one example of how to proceed. Developing a Sidewalk Sam project which is in its initial phase is another possibility.

When Corrin and Thompson were developing the seminal LeWitt project why didn’t one of those designs end up on the side of a downtown building in North Adams? Is that still a possibility? It would seem to be a no brainer. Corrin likes the idea and sees no reason why it can’t be done.

This brought up the topic of public art about which Corrin has considerable experience. She has created projects in Seattle and Baltimore. There are ways it can be done in North Adams and Corrin has very specific ideas. When Mayor Alcombright came by earlier in the day to visit the Osorio installation it seems they had a conversation on this topic.

Many cities in America have undertaken public art projects. Usually it entails making multiple casts of life sized cows, sheep, fish, bears, etc. But we have been there and done that. Is there another way to approach projects that involve and revitalize communities?

In keeping with the mandates of WCMA, Clark, and Mass MoCA Corin speculates on developing site specific projects involving artists with established reputations. It would take seed money and a firm hand to get the project out of committee. She described  ways to fast track the process and not get bogged down with years of discussion.

What if those signature, upside down trees, that have become a logo for visitors to Mass MoCA, were sited along the center strip in North Adams? Not that we are suggesting moving or replicating them. But it is an example of the kind of public art that would excite interest and create traffic through the city.

Imagine if there were a series of such projects over the next decade. It would create a trail of breadcrumbs leading visitors beyond the MoCA campus and through the city.

Several years ago this is precisely what Astrid and I experienced when visiting Munster, Germany. Every ten years the city hosts a sculpture festival. With maps we rented bicycles and toured the city finding the works. In order to do this we stayed in a hotel, dined in restaurants, and supported the local economy.

Why not have something like that in North Adams? Corrin told me that she is willing to roll up her sleeves and put sweat equity into making things happen. We plan to talk more about that in the fall when the Osorio project moves to Williams.