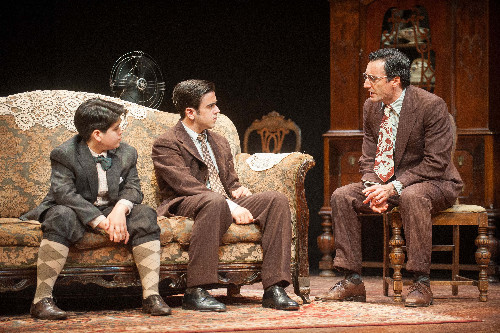 Eddie explains to his sons Jay and Arty why they must stay with their hateful grandmother. Photos by Kevin Sprague. 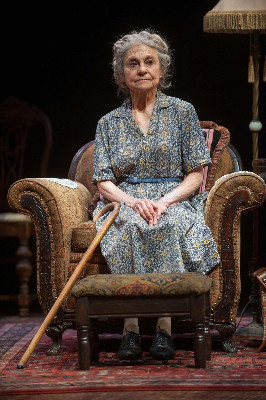 Grandma is played with cold restraint by Lynn Cohen. 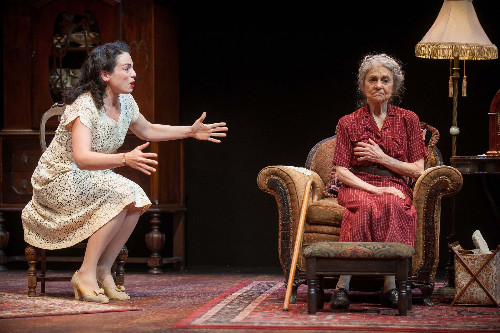 Bella (Paula Jon DeRose) pleads with her mother for understanding and love. 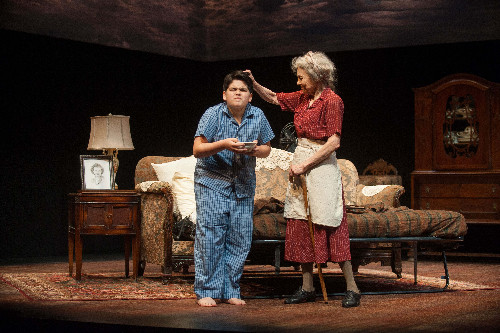 Arty (Jake Giordano) must down her terrible soup. 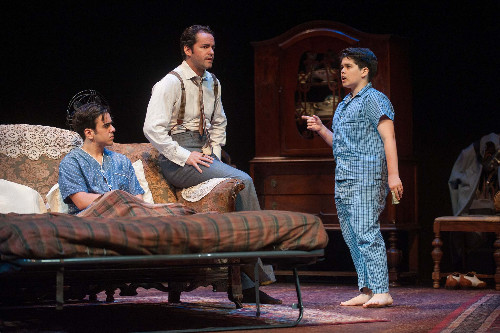 Uncle Louie (David Christopher Wells) is a bag man for the mob. 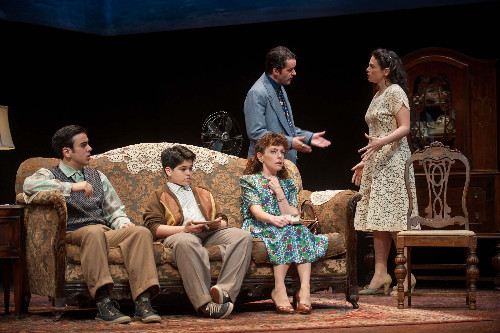 Bella has gathered the family for an important announcement. 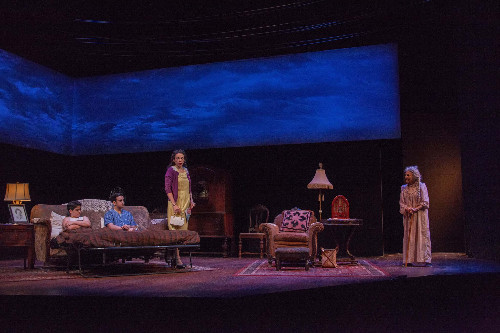 The set designed by John McDermott.

It was a miserable January 15, during a winter that just wouldn’t quit, with treacherous driving and icy sidewalks when the media gathered with Julianne Boyd to learn of plans for the cold wet summer we now endure.

What looks great on paper off season has to stand up months later. She told us of always wanting to do a Neil Simon play. We were introduced to Jenn Thompson who would direct Lost in Yonkers the Pulitzer and Tony winning play set in 1942 and staged in 1991. She has been the Co-Artistic Director of Off-Broadway’s TACT since 2011.

Her prior production of this play won a Drama Desk nomination in 2012. The challenge was to recreate the magic in the Berkshires.

This is a very different kind of comedy for Simon. There are lots of laughs but also the kind of gravitas that one associates with the masters Tennessee Williams and Arthur Miller. With this stunning, heart wrenching, tragic and ironic play Simon went toe to toe with the best and brightest.

If, as Boyd stated, she wanted to dip into Simon this was a great way to start. Based on what we saw yesterday we can only hope for more.

With two, one hour acts and a fifteen minute intermission, it is a full evening of theatre. It is usual for plays to work their way into audiences with a first act of exposition and then a faster seeming second act as the story line hits full throttle.

In this case we were grabbed and absorbed by the first ten minutes in a drama that had us flat out entranced from beginning to end.

It is a hot summer day as the boys Arty (Jake Giordano) and Jay (Matt Guley) squirm about uncomfortably in their Sunday best. They are seated on a well worn couch with a lace backing.

In an efficient set designed by John McDermott the couch will also serve as a pull out bed. There is the shabby furniture of a working class immigrant family. At angles above are two panels forming a panorama of the sky. Over that are telephone poles with wires suspended from one end of the stage to the other. Lighting by Martin E. Vreeland plays over the cloud panels to create transitions of mood and time. The telephone lines create metaphors for distance and communication.

The boys don’t want to be there for a rare visit to their mean and brutal, withered Grandma Kurnitz (Lynn Cohen). The boys discuss her legendary abuses including whacks to the head which made the ditzy Aunt Bella (Paula Jon Derose) even more tetched. Or Aunt Gert (Stephanie Cozart) who has a speech impediment caused by burying her head in pillows when Grandma put a hurt on her for talking in her sleep.

Their father Eddie (Dominic Comperatore) shuttles back and forth from Grandma’s room. He commands the boys to sit up straight, for Arty to comb his hair, and to look their best.

There is ever building suspense and it takes time before the menacing old woman, thin and frail as a stick, enters with the support of her cane/ weapon. To know her is not to love her. She is one of the truly hateful characters of modern theatre. Indeed, what a challenge to play her.

This is a Jewish family in Yonkers which is to say the bottom of the social spectrum.

Grandma, a widow, fled Germany with her six children two of which later died. She ekes out a living in the candy and ice cream store below. The family helps to run the business but she charges them for every pretzel that goes missing. It’s possible at the end of the week to owe her more than you earn. This, as well as her menacing cane, is a measure of her flinty mean spirit.

The worst nightmare of the boys, played with stunning maturity and great comic timing, is that they will have to live with her.

But Eddie owes a fortune to loan sharks. He went into debt to make his wife comfortable before succumbing to cancer. She had a private room and the best care. He paid extra to have her bed next to a window with a view of a lovely tree.

He had to give up their apartment and now must go on the road buying scrap metal to build the ships and tanks of the war effort. The job pays well and he hopes to return in a year with money to pay off the debt. He conveys this dilemma with understated turmoil particularly when Grandma won’t hear of it. She raised six kids and that’s enough for her.

Aunt Bella, however, prevails that it will be fun. This is a lonely spinster, clutching for any shred of joy and escape from the misery of tending to her old and frail mother. There is a fantasy life that she finds at the movies. We learn that things happen in the dark. There she meets an usher, who like her, is handicapped. This simple man who she hopes to marry and open a restaurant with can’t read or write.

She is such a good and simple soul that she works her way into the hearts of all who know her including our own.

In her first scene she asks the boys if they like her pretty dress. It isn’t. She proclaims that it took a year to make it. The costumes by Jennifer Caprio are well suited to the period and Bella has a number of changes.

The terrified and traumatized boys are taken in and at the two month mark congratulate each other as survivors. Arty is sick and gets to skip a couple of days of school. He’s in bed reading a comic book. Grandma won’t have it and insists that he down her dreaded medicinal soup.

Enter Uncle Louie (David Christopher Wells) a minor hood and bag man for the mob. The bag proves to be an important prop. He’s on the lam and dives into the middle of the bed having yanked the pillow from Jay.

He’s on the run and Jay begs him to take him along. The boy sees hope in pursuing a shady trade. Nix to that.

Every cog in the wheel of this flawless, well oiled production works with true perfection. The skillful direction of Thompson has brought the best from each of the actors. In particular she must be applauded for her work with Arty, “13 and a half,” and Jay “15 and a half.”

Floating about with fluttering arms Derose’s Bella just tears us to pieces. We want the best for this tender and fragile woman who is looking for love in the dark. She likes the air conditioned movie theatre because it’s more comfortable for the actors. When it is pointed out to her that it’s just a movie she has an interesting response. The actors will feel better because the audience is more comfortable looking at them.

Priceless. This is one of many examples of the writing of Simon that reveals the characters so richly and succinctly.

The most difficult and challenging role is Cohen’s grandma. She is both dependent on the care provided by Bella as well as brutally mean and controlling of the family.

In the back story we catch glimpses of what happened during the rise of the Third Reich. There was a demonstration broken up by thugs with clubs. In the melee her foot was crushed. This is but one of many signifiers of her pain and subsequent punishing demeanor. There is no joy in her life and she insists that there be none for her family.

Cohen plays this with a stone face never betraying a hint of feeling. There is a single lapse when she reveals guilt over surviving two of her children. She will neither give nor take anything from her family. The performance of Cohen is cold to the point of being brittle. But that’s the crucial fulcrum on which hinges the performances of this wonderful and finely tuned cast.

This production compares to the very best we have seen at Barrington Stage.