Gorgeous New Musical Not Far from Off Broadway 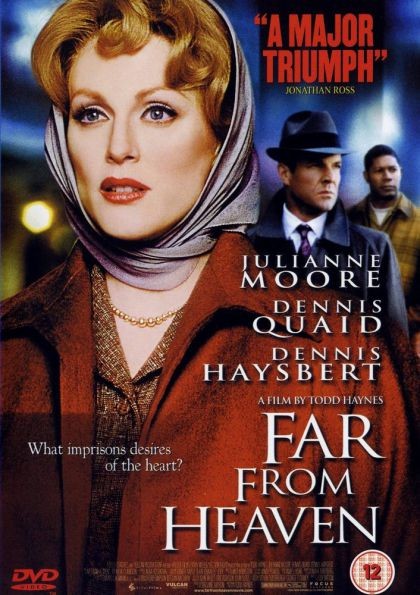 The 2002 film inspired the current musical. 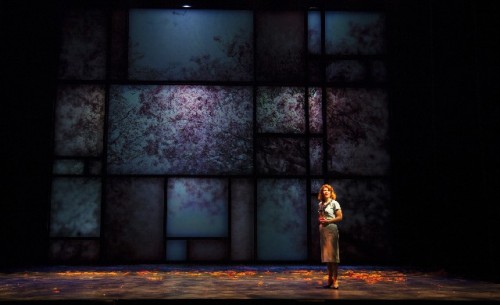 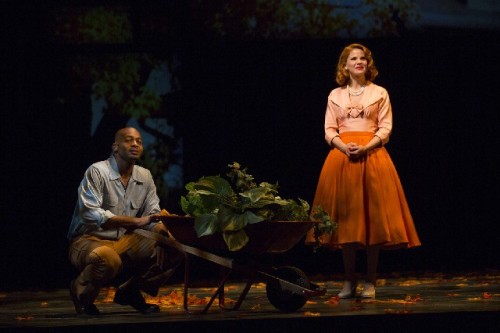 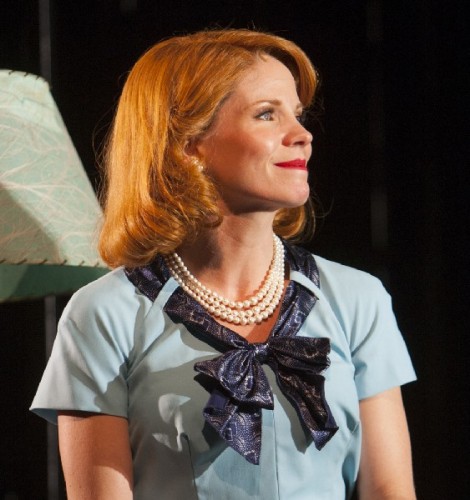 Cathy is living the American dream.

Raymond suffers the consequences of befriending a white woman. 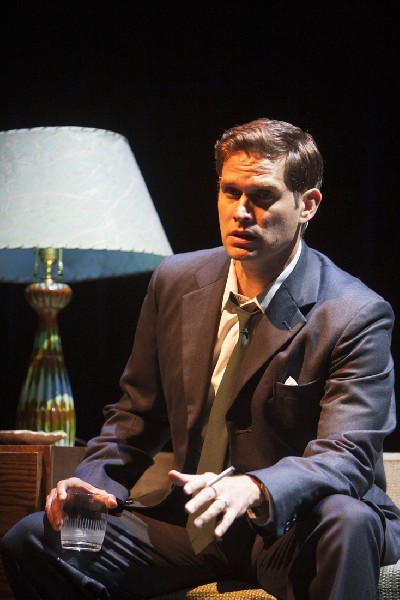 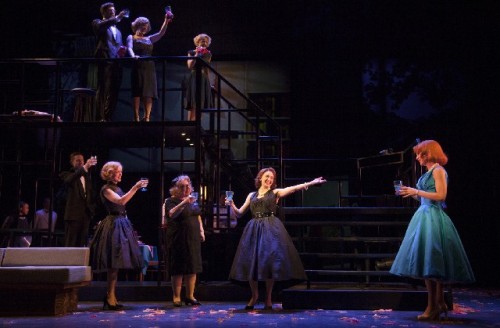 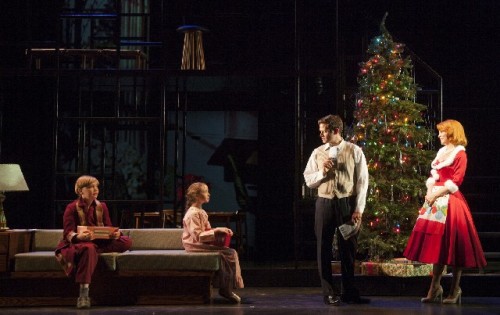 A Norman Rockwell Christmas in Connecticut. 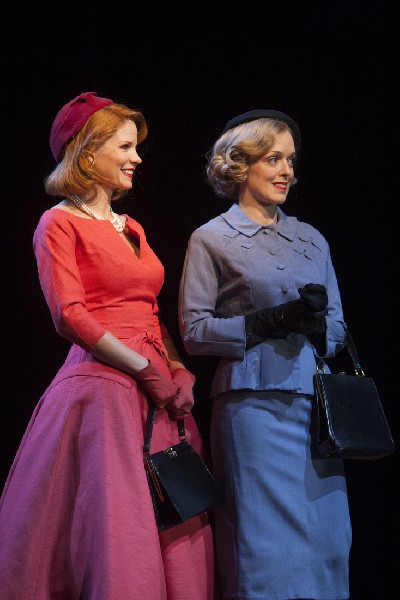 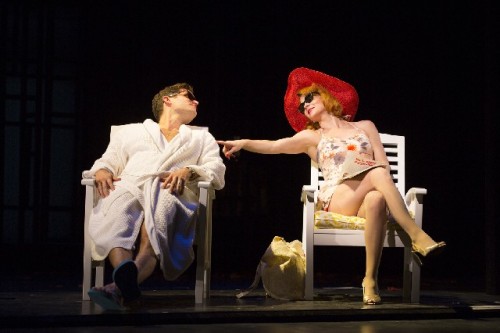 Seeking a cure on vacation in Miami. 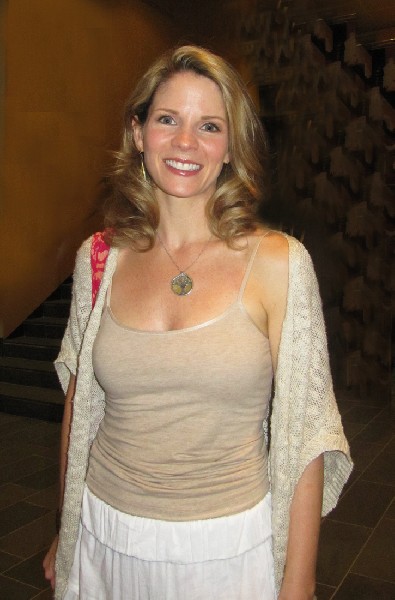 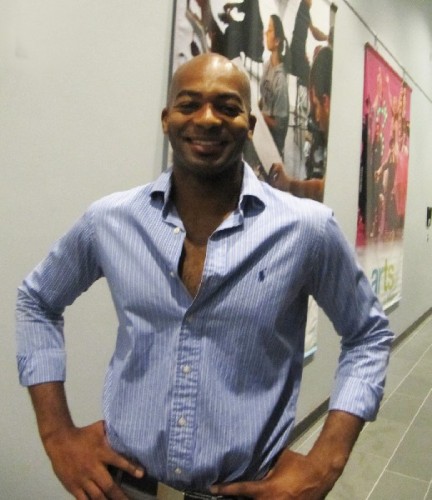 Last night marked the world premiere of a gorgeous musical Far From Heaven with a lush, rich score by Scott Frankel with lyrics by Michael Korie based on a book by Richard Greenberg. It is the usual fabulous production of our very own Broadway in the Berkshires, The Williamstown Theatre Festival.

The new work which is being workshopped at WTF is based on the 2002 film written and directed by Todd Haynes and starring Julianne Moore, Dennis Quaid, Dennis Haysbert, and Patricia Clarkson. The romantic potboiler set in 1950s Hartford, Connecticut was nominated for several Academy Awards: For Best Actress in a Leading Role (Julianne Moore), Best Original Screenplay (Todd Haynes), Best Cinematography (Edward Lachman), and Best Original Score (Elmer Bernstein).

The 2002 film was created in homage to the 1950s melodramas of Douglas Sirk. While dismissed as a midbrow, bourgeois creator of popular, soapy weepers Sirk is now viewed by critics and film historians as an auteur. While intended for a mass audience his films are appreciated for their craft and nuanced subtleties.

It is curious that there is such a revival of theatre, and television focused on the post war era of I Like Ike, social and political conservatism, McCarthyism, the Cold War, Sputnick,  the emergence of television, the repression of human rights, the birth of rock ‘n’ roll from Bill Haley and the Comets to Elvis Presley and Chuck Berry.

In addition to Far From Heaven this season WTF presented another view of the 1950s Last of the Red Hot Lovers by Neil Simon. Yet again the ‘50s based Mad Men is dominating Emmy Nominations.

I endured the ‘50s as a teenager borrowing daddy’s Cadillac, baby blue convertible, with white, calf leather seats, blue wall tires, and gold spiked hubcaps for dates with hot girls who didn’t go all the way. Compared to the mayhem and social upheaval of the 1960s I do not recall the 1950s with fond nostalgia.

As conveyed in this stunning new musical it was a time of deep repression. It explores themes that surfaced explosively a decade later.

Cathy Whitaker (Kelli O’Hara) is a desperate housewife pursuing the American Dream in bourgeois suburbia. Her husband Frank (Steven Pasquale) is a good provider struggling to contain homosexual urges, which, when revealed, he is willing, initially, to treat as a curable “illness.” Deeply troubled and hurt Cathy receives kind and unanticipated compassion from her African American gardener Raymond Deagan (Brandon Victor Dixon).

While on the surface all is pretty, safe, and enervating seething below is a volcanic, double header of homosexuality before the Stonewall Riots of 1969, and mixed race relations anticipating the Civil Rights era of the 1960s.

The WTF production of Far From Heaven presents a disarmingly benign and beautiful rendering of middle class Hartford in the 1950s. This is achieved by appropriate projections of period images designed by Peter Nigrini. They are also used to convey the passage of time and seasons. The stage is left bare in the scenic design by Allen Moyer onto which are rolled out welded steel, modular elements conveying the Whitaker home, the bar which Raymond takes Cathy to visit, or the Florida hotel and nightclub where Cathy and David vacation and attempt to cure his disease.

The costume designs by Catherine Zuber are perfectly stunning. She has gone all out to dress the lovely O’Hara in ultra feminine, pastel shaded, hoop skirts. O’Hara has so many costume changes that she must be exhausted from pulling up all those zippers. We catch a glimpse of her in foundation garments evoking one of those nostalgic “I dreamed I was vacationing with my homosexual husband in my Maidenform Bra.”

In her boudoir there is a Barbie Doll fashback when her daughter Janice (Alexa Niziak) wants to grow up and be just like Mommie. The son David (Charlie Plummer) is a cute kid who wants to shag balls with his Pop.

There is that aha Norman Rockwell moment when the family gathers around the Christmas Tree. Cathy is decked out in an over the top, red, fur trimmed outfit as Mama Claus.

Ok, we get it. The play is channeling a sociological séance. Harper's Magazine editor Russell Lynes satirized Virginia Woolf’s highbrow scorn in the article "Highbrow, Lowbrow, Middlebrow." In 1960 Dwight Macdonald waded in with a critique of middlebrow culture, "Masscult and Midcult." Art critic Clement Greenberg added the notion of Kitsch.

All of those theories and elements, including specific kitsch objects, are vividly evident in this sublime musical. The films of Sirk, as reworked by Haynes and now the current WTF production, convey primary source material of what was truly stinking rotten about the American Dream of the 1950s.

During a drunken scene at the annual Christmas party hosted by the Whitakers there is a horrific moment conveyed by the tormented Frank. Friends have praised Cathy as a great beauty, perfect wife, and hostess with the mostest. He tears her apart revealing that he knows what’s under the face paint and a figure when not squeezed into shape by a girdle. He knows the truth, or at least as he sees it, and it is driving him mad.

There is another zinger as the ever more visible issue of Civil Rights is emerging. One fool at the cocktail party stupidly remarks, evoking a gasp from the audience for its blatant ignorance, “Of course there are no negroes in Hartford.” This draws a glaring glance from a black man serving drinks to the guests. We intuit that black servants, such as Sybil (Quincy Tyler Bernstine) were truly invisible just as portrayed in the seminal Ralph Ellison novel.

What I found difficult about the film, and now the musical, is the strident repression of feelings. It just seems unfathomable that there is no rage or backlash. In the film The Help, for example, there is that wonderful scene where a maid who has been fired serves her former employer a shit pie.

None of that subversion here.

When Cathy learns the truth of her husband’s sexual orientation she is committed to solving the problem and saving the marriage. Really! Similarly, we find no anger or resentment from Raymond enduring racial insults, not just from whites, but from his own people for being seen with a white woman. His daughter has been assaulted and rocks are hurled through the windows.

While Raymond has evoked both black and white rage he plans to move on without so much as a whisper of resentment or protest. He is portrayed as just too noble and pure of heart. When Cathy finally realizes her love and desire to be with him, while moved, he must do the right thing for his daughter as her single parent.

Perhaps we are going too deep with critical analysis.

More likely the audience will simply be wafted along by a magnificent score inspired by, but not an imitation of, the great Elmer Bernstein. In the film much of that unstated undercurrent of repressed feelings is conveyed by the evocative music. It was indeed a starting point that inspired this full musical treatment.

The songs are truly wonderful. I was hooked right from the beginning with “Autumn in Connecticut” sung by Cathy, Sybil, David and Janice. Immediately, we were just floored by the magnificence of O’Hara’s voice. She has those Broadway pipes for sure. There were bright colored leaves falling and a projection of fall foliage. From the get go Far from Heaven let us sit back, relax, and go with the flow.

That was followed by a cute “You Like” a duet with Cathy’s best friend Eleanor (Nancy Anderson). They are selecting the matching table cloths and napkins for a benefit. It conveys that this is what middle class women did in the ‘50s. We also learn, when the gossipy girls get together that you ‘do it’ “Once a Week” to keep a husband happy. We observe Cathy taken aback as she clearly rarely takes one for the team. Frank often works late at the office and we come to know why.

Cathy and Raymond get to know each other though a serendipitous meeting at a museum event (Likely Hartford’s Wadsworth Athenaeum). Wonderfully, he sings to her about the merits of “Miro.” Unlike her husband, Raymond is sensitive to the arts which excites her interest.

Between now and the 2013 production at New York’s Playwrights Horizon there are bound to be changes. Right now the production is close to perfection with no serious or glaring issues.

The cast and singing are spot on. Steven Pasquale as Frank was a particular surprise and revelation. He was familiar from his role in the TV series about New York fire fighters Rescue Me. Who knew that he would be so wonderful in a musical? The juveniles were mature and polished particularly Alexa Niziak who also has talented ballet moves. That split was really impressive. Nancy Anderson was terrific as the best friend.

Of course one simply can’t find adequate words of praise for the leads played by O’Hara and Dixon. However implausible and complex they made us believe in their tender love story. Their duets were truly soaring and other worldly. Particularly during their parting "A Picture in Your Mind" that explores the conundum of their mixed race relationship.

Ok. Here goes. That Miami nightclub song “The Feminine Touch” was a snazzy show stopper but just didn’t fit with the dramatic flow. Similarly, “Wandering Eyes” was wonderfully rendered by an over the top Latino (Toby Yazbeck) but needs to feel more integral to the narrative development.

If this show remains intact with that great cast, and some fine tuning, the run at Playwright’s Horizon feels like a stepping stone to Broadway. Our money is down on this one to go all the way. From WTF to a galaxy far far away. How heavenly.