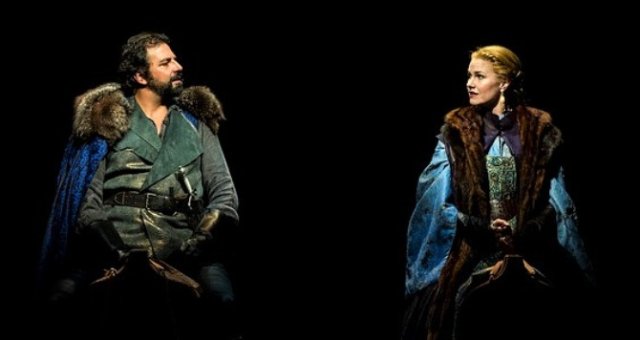 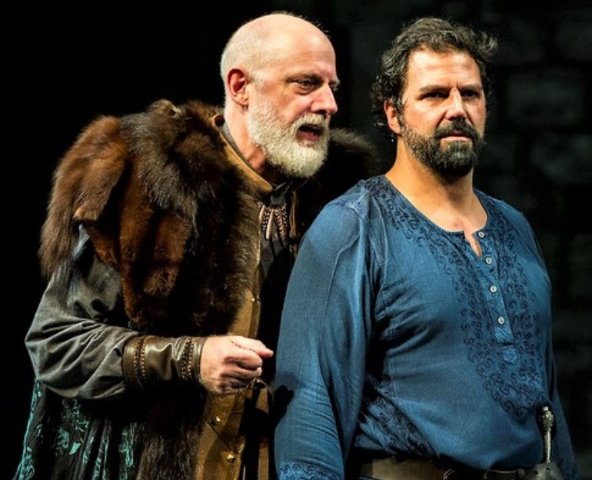 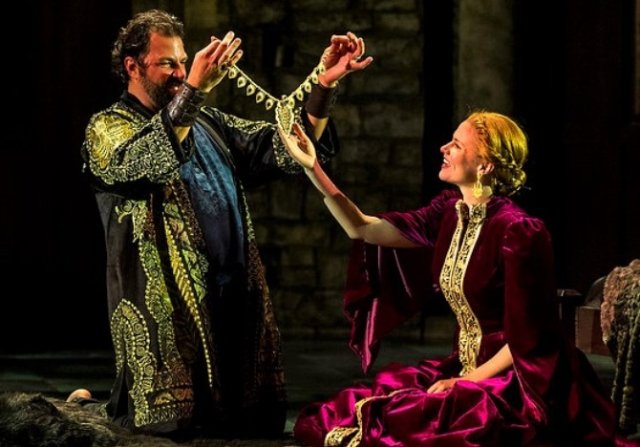 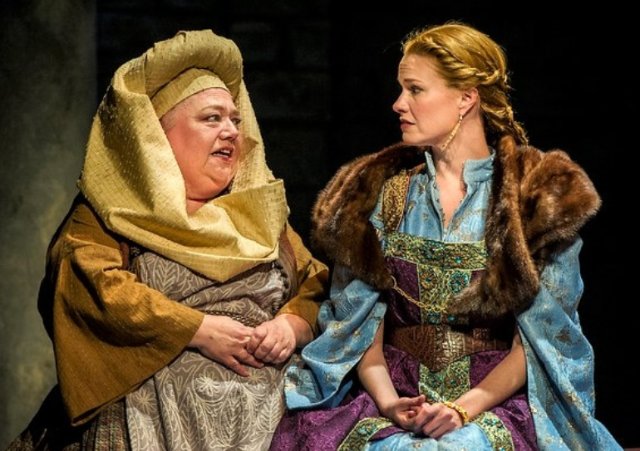 The Queen and her maid.

The most compelling aspect of Mark St. Germain’s new play Gertrude and Claudius at Barrington Stage Company is its magnificent language. It transitions from Shakespeare’s play Hamlet through a novel by John Updike. Adhering closely to the sources presented issues so the playwright opted for a script that lands harmoniously on our ears.

While clear, distinct and accessible the spoken word is lyrical and poetic. That is expressed in emotional moments that range from anger and rage to intimacy and romance.

As the resident playwright we have seen numerous St. Germain plays produced at Barrington Stage Company but none like this. Walking in the shoes of others has represented challenges and opportunities. Familiarity creates expectations and the play must be credible. Is what we experience plausible?

To be clear, this is not Hamlet although spun from it. From the perspective of the young Prince Hamlet his mother, Gertrude, conspired with his uncle, Claudius, to murder his father. Expressed by “To be or not to be” Prince Hamlet is a proto existentialist. He is coming to grips with the mandate, expressed through a ghost, to avenge his father.

With Hamlet Shakespeare evolved from medieval Macbeth to the Renaissance. The character of Hamlet has roots in modernism. With The Tempest the style of Shakespeare developed into Mannerism.

Updike took the intriguing position of reconfiguring the adultery and murder of Gertrude and Claudius as a love story. From the Updike/St. Germain perspective we regard them with sympathy. As king, husband and lover Amleth was a failure. There is an effort to clarify that Gertrude has committed adultery but not murder. At worst she is complicit and beneficiary of the death of her husband. After decades of coping she has finally mated with the right brother.

How it screws up her son is not the point of this play. For that we have Hamlet one of Shakespeare’s longest, most complex, and widely produced plays. Since its inception all of the great actors have taken a crack at the role. As a career move, however, actors do not clamor to play Claudius. Perhaps that will now change.

There are stunning scenes in this new work. This production, however, does not reach its potential as one of St. Germain’s most ambitious plays.

Kate MacCullage is a superb, gorgeous, steady and solid Gertrude. There are all the right responses to the men in her life. That starts as daughter to a perfectly noble father King Rorik (Greg Thornton). If only Douglas Rees had some of the same stalwart, regal presence as her husband King Amleth. With an off putting, high-pitched delivery Rees was never credible in a key role.

In the second act, thirty years later, Rees is more visibly aged than MacCullage or Alexander. Nothing has been done to age the lovers some three decades later. That anachronism makes it difficult to accept the time line of events.

As Claudius, Elijah Alexander needs more romantic swagger. A comic signifier of age is a pratfall when awkwardly attempting to climb through the window of their love nest.

Yet again, in the supporting role of Gertrude’s attendant Herda, Mary Stout was wonderful. She is wary of Claudius and acts to protect the reputation of her mistress. On two occasions she delivered the best lines of the evening and brought the house down.

The usually brilliant Rocco Sisto never landed the court attendant Polonius. There were miscues and blown lines. The character is played as a pompous fool in Hamlet. Here he is outed as corrupt and blackmailed by Gertrude. She wants secret access to his country residence. Polonius  acquired the property with embezzled funds.

When King Amleth confronts Claudius about adultery there will be consequences. Fearing a death sentence Polonius conspires with Claudius. This is a very different take on the character. His daughter Ophelia is mentioned but never appears.

Again, this is not about Hamlet. Nick Lamedica as (Hamlet/Yorick) created thumbnails of both characters doing the best with what little he was given.

Historically the play is set in Elsinore during the 13th century. The design by Lee Savage with its rough masonry walls coveys a late medieval/ gothic castle. During that period they were grim and dank. They were fortifications not palaces. Royalty lived more in squalor than luxury. The costume designs of Sara Jean Tosetti are overly ornate. They convey the Danish court as too prosperous. She has draped Gertrude with brocade and jewels suitable to Theodora of Ravenna. Tosetti has the men wearing long, awkward capes. They are topped, not just with fur, but taxidermy. It's ludicrous to see Claudius with a large dead animal wrapped around his neck.

Although Claudius longs for Gertrude he has been a world traveler. Partly through avoidance of temptation. They exchanged love letters. When returning to the castle he brings presents. One is a gold peacock pendant. That’s not such a big deal as Tosetti already has her dripping with jewelry.

He described Byzantium as the greatest city on earth. Intimately, he presents her with a magnificent silk dressing gown. There is a moment of modesty as she removes her dress and appears in an undergarment. Tantalizingly, she asks if he is disappointed in her figure. That moment has been a long time coming as she is now a woman of a certain age.

There would be a different impact if we saw middle-aged lovers finally getting it on after all those years. What’s it like in your fifties to hook up with a high school sweetheart?

Updike/ St. Germain have added enticing dimension to Gertrude. We see her as a woman of the period. Her father made what he regarded as a good match. She had nothing to say in the matter. On the wedding night King Amleth fell asleep snoring; perhaps from too much mead. Suffering in silence Gertrude was a dutiful wife and stay at home mom.

Some thirty years later, like Virginia Woolf,  she wants a “room of her own.” There to become a better wife and read lives of the saints. This is her argument presented to Polonius. Herda plays along offering a prayer book.

The seed of all this is in Hamlet. Gertrude and Claudius has overtones of post modern deconstruction. There was nothing unusual about women, even medieval ones, cheating on their husbands. Beyond lust and romance this Gertrude strives to find herself as a feminist. She is a thoroughly modern Millie.

While the play evokes compassion for Gertrude and Claudius no doubt King Amleth got a raw deal. He may have been a bore and lousy lover but does that justify homicide? Something is rotten in the state of Denmark.