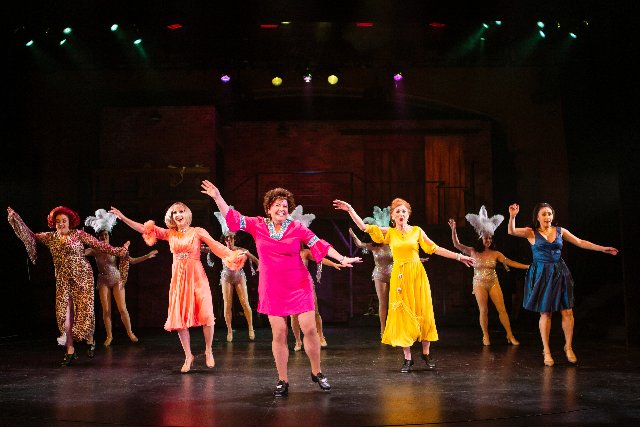 Reunions promise joyous revelry with nostalgia for days of old; reestablished contacts with friends from the past; and the memories of younger ages.  Yet the froth belies a potentially dark underbelly.  Some of the revelers will seem as vital as in their youth, but others will have aged before their time.  Some will have succeeded in life by whatever measures, while others will have failed.  And though many friendships will be rekindled, historic clashes and other unpleasantries may re-emerge.

After some success as a lyricist, as well as writing the music for “A Funny Thing Happened on the Way to the Forum,” Stephen Sondheim decided to undertake only projects in which he would write music and lyrics.  The works that followed in the early Sondheim musical style received massive Tony Award recognition - “Company” (1970), “Follies” (1971), and “A Little Night Music” (1973).  The lavish and expensive-to-produce “Follies” earned 11 Tony nominations and won seven, but was a box office disappointment with barely 500 performances on Broadway.  Yet, the show became a classic.  San Francisco Playhouse has taken on the challenge of producing this massive and demanding project.  The result is a worthy rendition of a great American musical.

Clearly mimicking the Ziegfield Follies, the reunion is of Weismann Girls and their spouses, some three to four decades after their glory.  In this metatheatrical play, the event takes them back to the theater in which they performed.  Now crumbling and slated for demolition, the setting symbolizes the marital relationships of the two central couples in the narrative, both of which are on the brink of collapse.

Ben became a successful politico in Washington, but his childless wife, Phyliss, has become disillusioned and sarcastic.  Buddy, an oil equipment salesman in Phoenix, had been Ben’s good friend.  Sally, his somewhat neurotic wife, has driven Buddy into affairs largely because of her dissatisfaction with her station in life.  Meanwhile, after all these years apart, Sally still carries a flame for Ben which threatens to ignite at the reunion.

An affecting flashback device in the play involves younger versions of the four main characters often appearing on stage to re-enact the past, highlighting the passions and mistakes of the young.  The actors playing the youthful parts in this production match the present-day actors nicely, so the conceit generally works very well.  There are complications, however, particularly when characters from different time periods interact.

Apart from the intimate and often contentious exchanges involving the two couples, a completely different, mostly bubbly and upbeat vibe takes place in scenes with the other party goers.  Sondheim created a large number of secondary roles.  Indeed, several highlight songs are sung by ably by various supporting players in this cast.  A number of these numbers are pastiches of music from the earlier era including memorable songs like the bouncy “Broadway Baby” (Hattie); the Valentine to a city “Ah, Paris” (Solange); and the wistful “Who’s That Woman?” (Stella), as well as the show-stopping survival anthem “I’m Still Here” (Carlotta).  But the climactic crux of the show is delivered by Phyliss with the thoughtful discourse on dividing lives with divorce, “Could I Leave You?”  Guess!

Choreographer Nicole Helfer’s numerous arrangements add to the lighter side of the action.  Perhaps the most lively piece in the play is the stage-filling dance tied to “Who’s That Woman? (Mirror, Mirror).”  Five of the Follies alums are joined by an equal number of sequined and feathered “Ghosts of the Follies Past” for a ten-women tap number that is vigorous and highly entertaining.

It is still curious that “Follies” didn’t register with audiences at the outset, as it is extremely literate and innovative with a lively score full of memorable songs.  However, the narrative presents several hurdles that could cause the audience to shy.  In particular, each main character is despondent for a different reason, and it’s hard to root for any of them.  The counterbalance of the cheerier party sequences involves many characters which confuse and give the play a bit of a split personality.  Finally, when it seems that the show should be about over, there is a sequence of four scenes.  Each is a “folly” for a lead character in the manner of a Weismann Follies skit that seems inorganic.

Director Bill English does a fine job in pulling the pieces of this production together with over 40 performers and production techs, including five stage managers – not to mention the additional creative team.  English and co-designer Heather Kenyon’s front-stage and back-stage sets is another great asset to the show.  At opening, performances and voices were a little variable in much of Act 1 but were largely redeemed by Act 2.  Similarly, the orchestra lacked proper tuning when it was on its own for the overture, but that defect was not noticeable when the instruments accompanied singing.  Taken as a whole, the production is a delightful crowd pleaser and a credit to the company’s success in presenting important musicals from the past.

“Follies” with music and lyrics by Stephen Sondheim and book by James Goldman is produced by San Francisco Playhouse and plays on its stage at 450 Post Street, San Francisco, CA through September 10, 2022.