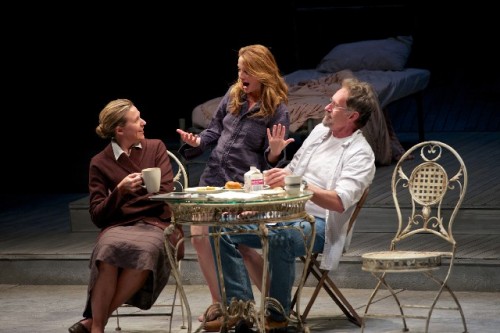 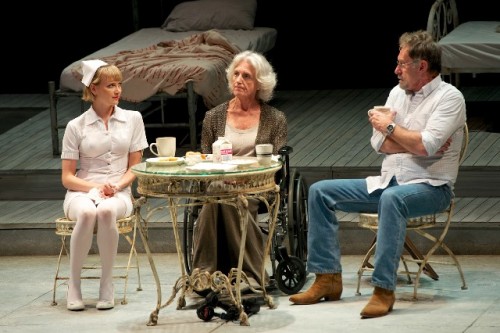 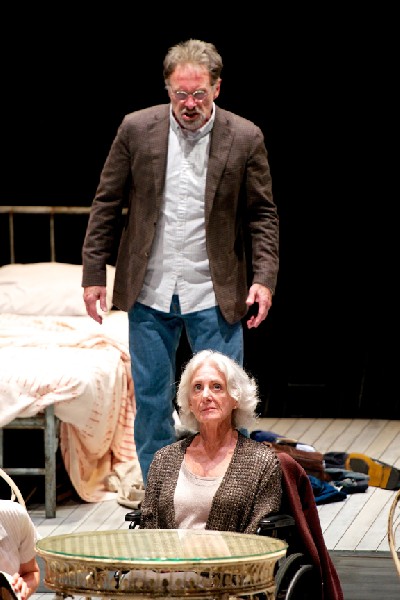 Mom is less than welcoming to the gentleman caller twice the age of her daughter.

In a stark, abstracted set by Luciana Stecconi, augmenting the surrealism of the play, there is a loud scream that awakens Sally (Margot White) and on the twin bed in the same room her 65-year-old, ersatz lover Roscoe (Michael Cullen).

The source of the scream proves to be the crux of the drama.

Bolting awake Sally, wearing just panties, for a brief moment is frontally nude. In an eye blink we note the red line from her thorax to her navel. This is crucial information as the plot unfolds.

The title of renowned playwright Sam Shepard’s play, which premiered in New York at Signature Theatre, now getting a rewrite and second production in West Virginia, is Heartless.

It is descriptive, both accurate and metaphorical, as well as ironic. It aptly nails this intense family tragedy which is too often just that.

The backstory is that as a ten-year-old Sally was terminally ill with a leaking heart. Lingering on the organ recipient list, facing certain death, she was given the heart of a murdered child.

In a chilling monologue her mother, Mable (Kathleen Butler) a wheelchair ridden invalid, describes how Sally, virtually a corpse with her heart removed, was brought back to life by a donor’s organ.

During a virulent exchange Sally asks why she let her live. “It’s what mothers do” was the less than satisfying answer. It implies more duty and obligation than the love that ever child craves.

Individuals given such a miraculous gift of life are seemingly burdened to make something of themselves. Like most twenty -somethings Sally struggles to find direction and purpose. We all have the luxury of squandering some aspect of our youth.

For Sally, however, she is haunted by the child who was murdered in order that she might live.

It seems that the shade of that restive soul, deprived of life so violently, is either real or imagined.

Not unlike troubled and insecure young women Sally seeks the stability and alleged life experience of Roscoe a famed scholar and “professor” of Latin American literature. They met when she approached him as the subject for a documentary video.

Roscoe, however, is no anchor for her emotional storm.

He has recently left or been kicked out by his wife and family. Sally has unilaterally provided him with the sanctuary of the family home high above the valley of Los Angeles.

Not entirely emotionally bankrupt, like the rest of the characters in Shepard’s grim play, it seems he loves the dog he walks but we never see.

Turning on the camera he is enraged by her probing into his private affairs. If Sally is heartless, Roscoe is homeless. They make an odd couple. At least momentarily.

Toss in a dash of sibling rivalry with Lucy (Cassie Beck) the stay at home sister tasked with caring for their invalid Mom. She samples Mom’s pain killers. The exchanges between the sisters are vile. And, guess what, Lucy has eyes for Roscoe who offers to serve her coffee and donuts.

In an absurd scene, please Sam say it ain’t so, Sally grabs the offered pastry and stuffs it in her mouth. After an interval of puffed cheeked munching and mumbling she spits it out. Disgusting.

Isn’t that a rewrite of Cain and Abel? With a gender switch and not quite so Biblical?

As the ménage a trois grinds along in a wordy and enervating manner Mom is wheeled in by her dishy nurse in whites Liz (Susannah Hoffman). She is mute but responds to the action with an expressive face. We catch and note a quick furtive glance at Roscoe.

Eventually, kind of like Big Daddy and Brick in the cellar of the mansion, Mabel gets to air the family linen in The Big Speech. There is something about how she got maimed, James Dean, the runaway dad, and her hateful kids. By then, however, I was hardly hanging on her every word.

Well, maybe it wasn’t Tennessee Williams. Perhaps it was late period Sam Shephard. Or late Albee. Or just a day late and a dollar short.

Like Liz and Sally sitting down for a heartless to heartless.

Here Liz is seemingly alive and finds her voice. Is she the projected guilt of the lost donor child who has grown up as the private and secret other of Sally? As such Sally discovers her in bed hooking up with Roscoe.

Excuse me Mr. Shephard but how do you fuck a ghost?

Which makes Roscoe the ultimate cad.

Or just a figment of Sally’s ever more deranged imagination.

Coming to his senses Roscoe is intent on high tailing it out of there. There is an amusing gag as the sisters keep dumping out his suitcase. Huis Clos. That works. Keep it in the play.

As for the rest get me rewrite.

Or call an ambulance.

I may be wrong. Critics often are.

But Heartless is D.O.A.