The Golem of Havana 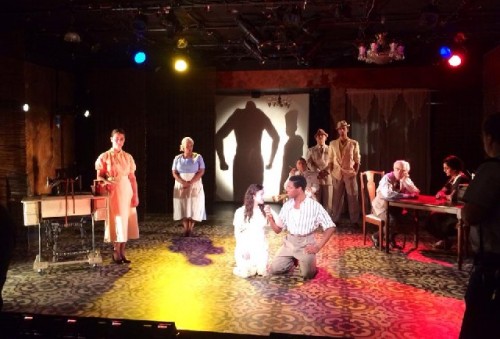 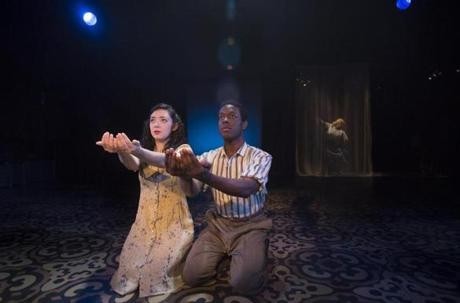 Rebecca and Teo pray to Yemaya. 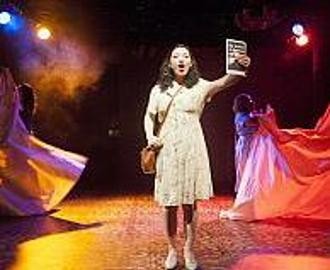 Under the artistic direction of William Film and the Musical Theatre Lab it is commendable that Barrington Stage Company is committed to developing new musicals.

The Golem of Havana, (book and direction by Michael Hausmann, music and orchestrations by Salomon Lerner, lyrics by Len Schiff) is dark, diverse and ambitious but a work in progress.

There are too many shifts from historic anti Semitism in Prague and the role of the Golem as mystical protector, the Final Solution under the Nazis, emigration to Cuba of a Jewish family, and the political struggles during the final days under Batista, then post revolutionary after the rise of Castro.

These shifts from the Jewish mysticisms of Prague to the Santaria worship of Gods in Cuba have musical equivalents in a score that ranges from Klezmer to Salsa.

The thread in often horrific events, past and present, falls on the young, naïve, often strident Rebecca Frankel (Julie Benko) the only daughter of Holocaust survivors a tailor Pinchas Frankel (Gordon Stanley) and his wife Yutka (Jacqueline Antaramian).

The evening starts with the promising appearance of Rebecca holding a cartoon book from a series she is developing. She sings the tale of the "Golem of Prague." On a simple stage designed by Edwin Erminy the story is illustrated by shadow figures behind curtains. Momentarily we are absorbed and wafted along by the exotic score of Lerner.

In the late 16th century the rabbi of Prague, also known as the Maharal, created a Golem, a figure formed from clay that comes to life defending the ghetto from antisemitic attacks. The Golem was called Josef and was known as Yossele. It was said that he could make himself invisible and summon spirits from the dead. The Golem, however, was not to be alive on the Sabbath. There was a disaster when the Rabbi forgot to neutralize the protector on Shabbat. The Golem transformed into a monster which had to be destroyed. The Rabbi smashed the clay figurine and its shards, with the potential of again coming to life, were long believed to have been stored in an attic.

There is a now lost 1915 silent film Der Golem by the German director Paul Wegener. Fragments exist and the search continues to recover a print. In the film the Golem, spurned in love, commits a series of murders. Rebecca refers to this dark side of the saviour of persecuted Jews.

Rebecca in dream sequences evokes the Golem which is seen as an enormous headless presence behind a scrim. By this means she is able to conjure images of how her family was betrayed by an alleged friend who initially protected them. The ghost of her aunt Olga (Gabriel Kadian) perished in the death camps which her mother survived.

While Rebecca evokes the Golem the servant Maria, in the Cuban religion of Santaria which merges Christianity and African worship, prays to Yamaya. Together they sing and pray by the ocean with a gift of watermelon to the God.

Rebecca's child like faith and altruism is shattered when the protection of the Golem and Yamaya fail to keep her family from harm. Maria is murdered by Batista's thugs searching for her terrorist son. He was acting out of revenge for the murder of his father as well as to overcome poverty and oppression. In fighting with Castro Teo has nothing to loose.

Over ten years of labor as a tailor Pinchas hopes to save enough for a down payment and bank loan to establish a shop in memory of his father. He is just one step ahead of the bills because he allows clients, including Arturo Perez (Danny Bolero), to leave with new suits and promises to pay later.

Arturo warns him about that bad business practice then does exactly that. He has insisted on the finest materials for a third suit on the cuff. The Jewish tailor metaphor is ironic for a production that wears its heart on its sleeve.

It seems that Arturo is well connected in the Batista regime and suggests a sure fire investment. If it rains in the war against Castro there will need to purchase rubber boots. He cajoles Pinchas into turning over his life savings in a get rich scheme to corner the market.

Now Pinchas is wealthy enough to open this shop and live a good life. His suits for Arturo have been admired as the finest on the island. A new client proves to be Batista.

Visiting the palace to take measurements he is instructed on the strict protocol by the ruthless Sanchez (Ari Statchel). Actually, El Presidente proves to be more informal and reveals that before becoming dictator he was for a time a tailor. They have something in common.

But reality sets in when Pinchas is a fly on the wall during a conversation about rebel prisoners. After brutal interrogation Batista orders them to be executed.

From here the musical descends into a horrific, all too predictable spiral. Every twist and turn of those multiple plot points are clichés. None of the characters have credible depth including, too significantly, Rebecca who has stridently overstaged nightmares about, guess what, The Golem.

Sure Batista was a monster, on an American payroll particularly the mob as depicted in Godfather Two. His government received enormous financial and military aid from the United States. Until Castro Havana was an anything goes decadent destination for American whales. When Teo morphs from terrorist on the run to a Marxist Comandante, however, we ask is Cuba under Castro any better?

Gambling and prostitution flourished under Batista who also enjoyed close ties with American corporations. Mobsters Meyer Lansky and Lucky Luciano enjoyed vastly profitable casino franchises. Although Luciano, who had helped the US in Italy through contacts with the Siclian Mafia, was to be deported after the war. He managed to escape to Cuba where he prospered in exile.

In the 1950s a reporter wrote that "Brothels flourished. A major industry grew up around them; government officials received bribes, policemen collected protection money. Prostitutes could be seen standing in doorways, strolling the streets, or leaning from windows. One report estimated that 11,500 of them worked their trade in Havana. Beyond the outskirts of the capital, beyond the slot machines, was one of the poorest, and most beautiful countries in the Western world."

The musical never really defines how the Frankel family is caught between the rock, Batista, and a hard place, Castro. Add to that glimpses of fleeing the Holocaust. There are just too many balls in the air, particulary with dollops of faith and mysticism, for the audience to absorb and be "entertained" by.

The purges and summary executions under Castro occurred round the clock. The play states that Batista fled with a "suitcase full of money."  Americans, through late night TV host Jack Paar, initially embraced Castro as a liberator. Too soon the ugly truth was revealed as the upper and middle class, leaving their worldly possessions behind, fled to a new life as Republicans in Miami.

On December 31, 1958, at a New Year's Eve party, Batista told his Cabinet that he was leaving the country with forty of his supporters and immediate family members. A second plane flew out of Havana later in the night, carrying ministers, officers, and the Governor of Havana. Batista took along $300 million amassed through graft and payoffs. Critics accused Batista and his supporters of taking as much as $700 million in fine art and cash with them. He died a wealthy man of natural causes in Portugal in 1973.

When the new tailor shop of Pinchas is seized by the Castro regime the family is seen leaving to start over yet again. Because they must leave with only the shirts on their backs Rebecca gives her Golem book to Teo.

With triage this musical may find further productions. Overall the cast was impressive. There was superb singing by Gordon Stanley a veteran of minor roles at BSC. When Danny Bolero burst into song and dance for a few moments the production came alive. It was that Afro Cuban zest this musical desperately needs. Ronald Alexander Peet is handsome with a stunning voice. But the script, literally, hobbles him. Jacqueline Ataramian put a lot into the role but there wasn’t enough substance and nuance to her abrupt switch and change of heart in taking the side of the wounded Teo. Rheaume Crenshaw has a fine voice but her acting was less than steady.

The songs were enjoyable including a duet by the ocean for Rebecca and Maria “Yamaya.” In luring him into the investment scheme “Take a Chance” is an insightful duet between Arturo and Pinchas. There is a comical exchange between the tailors Pinchas and Batista in “The Needle and the Thread.” We try to be absorbed by the love song “That’s Where I Belong” and Yutka’s “Nothing in Your Hands” was compelling.

Right now, however, there is no heat in the musical salsa. In straddling Jewish and Cuban mythologies, with a mix of Holocaust and Revolution, this musical is sending too many convoluted metaphors. At this stage conflating Prague and Havana just doesn’t mesh.

Too often the actors appeared to be confused and misdirected. The dream sequences, in particular, were out of balance and as one dimensional as Rebecca’s comic books.

Despite the pro forma of a standing ovation from an opening night audience of patrons and friends this was, for me, an evening more to be endured than enjoyed.