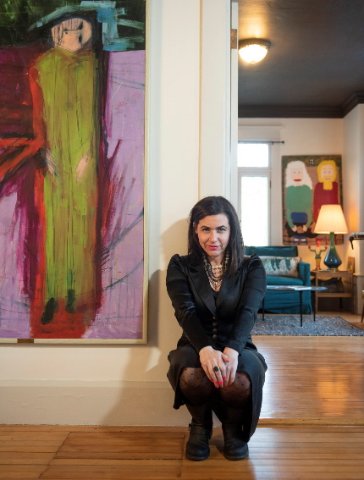 Photo courtesy of Magnus Stark GableStage's new producing artistic director, Bari Newport, will dive into the 2021-22 season with a special event in October.

When GableStage rehearses Arthur Miller’s The Price in preparation for opening the recently announced 2021-2022 season, new producing artistic director Bari Newport will use late, long-time artistic director Joe Adler’s notes. Also, Newport will use the South Florida theater icon’s blocking, as well as his technical and design crew. In addition, three of the four actors scheduled to perform under Adler will remain. A conflict will prevent one of the performers from appearing in the production.

Even as GableStage opens a new chapter in its history under Newport’s leadership, the nonprofit, Coral Gables professional theater company is honoring Adler’s legacy. It’s doing so, in part, by keeping Adler’s stamp on the company’s opening production of The Price.

GableStage was about to open a production of the drama under Adler’s leadership when COVID forced theaters to close. Adler, who led GableStage for 22 seasons, died the following month from a lengthy illness. The company conducted a nation-wide search for Adler’s successor. Ultimately, they chose Newport out of 80 applicants from all corners of the U.S.

GableStage will officially re-open when it presents the Adler-directed production of The Price, an American classic which will run from Nov. 12-Dec. 12.

To close out 2021, the multi-award-winning theater company will present the world-premiere of the one-performer show, Joe Papp at the Ballroom. The play, about the American theater icon, will run from Dec. 17-Dec. 31. Susan Papp-Lippman and Avi Hoffman adapted the piece, recreating Papp’s public concert in 1978,

To open the new year, GableStage will present the Florida premiere of The White Card, a piece by Claudia Rankine that deals with race. The production will run from Jan. 14-Feb. 13.

Following The White Card, GableStage will present the world premiere of Me Before You. Specifically, the show explores how the politics of a nation can impact the politics of a marriage. The show, which Newport has slated for Feb. 25-March 27, features music by Grammy Award winner Kristian Bush of the country-rock band Sugarland.

A lighter piece, Boca, about a group of retirees, will follow The White Card, running from April 22-May 22. GableStage’s production of Jessica Provenz's play will be a Florida premiere.

To close out the 2021-22 season, GableStage will collaborate with Abre Camino Collective to present the world premiere of Rubenology, The Making of an American Legend. Vanessa Garcia and Ruben Rabasa penned the piece, which will run from July 14-31, 2022.

GableStage will literally dive into the upcoming season at 7 p.m. Oct. 28 with a “season-opening event” at the Biltmore Hotel pool. According to a season announcement, SPLASH! “celebrates 1940’s movie mermaid Esther Williams with a one-night only synchronized swimming extravaganza.

At least one fact linking the productions comprising the 2021-22 season is that women wrote or co-wrote the majority of the pieces. Also, women will direct nearly all of the productions.

In addition to upgrading the HVAC and air handling systems in the theater space, GableStage has upgraded its schedule. Namely, the new lineup shortens the delay between productions, adds Saturday matinees, and introduces two performances on Wednesdays. Also, the new lineup features six subscription plays, plus one special production.

If GableStage needs to cancel performances or productions to comply with updated  Government COVID-19 requirements, the company will offer patrons an exchange or refund their purchase.

GableStage is offering three flexible subscription packages: premium, mid-week, and preview Friday. “These packages offer a savings of almost 30% off single-ticket prices and provide a host of additional benefits,” according to the company. Those benefits include $5 off all additional purchases, priority seating and easy, as well as free exchanges. Also, subscribers will receive one complimentary ticket to any one of the six regular productions.

Newport said that she is honored to succeed Adler.

“I intend to do my best to build on his incredible legacy of daring excellence, which is how I know GableStage,” she said. “I know it for its bold, quality, adventuresome storytelling.

“While I certainly bring my own sensibilities to season programming, the mission of the company is deliberate and strong: to challenge South Florida audiences with productions of artistic excellence that confront today’s issues and ideas. It is with that clear directive in mind that I proudly unveil GableStage’s ambitious 23rd Season and invite audiences to join us for GableStage’s next chapter.”

For the past nine-and-a-half years, Newport has led the Penobscot Theatre Company in Bangor, Maine, author Stephen King’s hometown. Before that, Newport served as an artistic associate at the Alliance Theatre in Atlanta, artistic associate/literary manager at the Pasadena Playhouse, associate producer at Horizon Theater and associate director of Florida Repertory Theatre.

For a detailed look at the upcoming season, go to https://theatricalmusings.com/reviews-by-theater/gablestage/2021-22-gablestage-season/