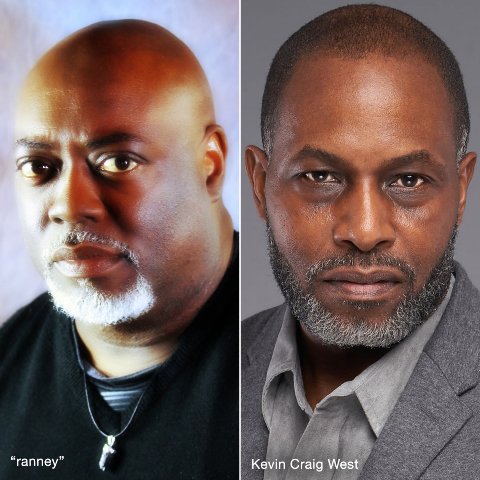 She returns to the company with a meticulously crafted, multi-facted, two-hander, Hymn. It features two men, Benny (“ranney") and Gil (Kevin Craig West).

Under the masterful direction of Regge Life the one act play begins and ends with funeral orations. With impeccable precision the award winning director unpacks the surprising and riveting relationships of middle aged men who begin as strangers and end, truly, as brothers.

Seated at the back of the chapel, with hesitation, Benny approaches Gil. They are the same age, with Benny six weeks older. They appear to have nothing in common.

With caution Benny reveals that he has come to attend the funeral of his father, indeed, their father.

The initial reaction of Gil is anger, disbelief and fear. Gil is firm in belief about the moral rectitude of his father as expressed in the eulogy. Benny has evidence but insists it’s not about money

Clearly their lives have been different. Gil has been raised with style and privilege the son of a businessman. While Benny was brought up by a loving single mother and has struggled.

From the ge-go it’s evident that Benny has soul. He breaks into “Lean on Me” by Bill Withers. Now somewhat portly he still has disco moves.

After a definitive DNA test there is a mutual effort to become integrated into extended families. Obviously, music means a lot to Benny as his three kids are named for jazz legends Louis Armstrong, Miles Davis,  and Ella Fitzgerald.

The bonding culminated humorously when Gil unearths boxes of flashy items from the 1980s. Old LPs and tapes are rummaged through. Also some Saturday Night Fever spangled outfits that barely still fit. The audience shares in their nostalgic delight. They cut loose to Chic, “Rapper's Delight," and Toots and the Maytals.

This poignant upbeat interlude underscores that they had similar cultural experiences though cruelly separated by their father. Sharing daily life, meals and family gatherings they are making up for lost time.

On a bare stage through furniture and props there are scene changes. Life advances the action and numerous shifts at a crisp pace. He pauses long enough to allow the actors space and for the consequences to sink in.

Benny invites Gil to the gym and acts as boxing instructor and personal trainer.

Initially, Benny appeared weak. There is a scene of him tossed from a bar. While Gil was well dressed, confident and prosperous. There is a dramatic reversal and undoing.

Gil enjoys security as inheritor of his father’s business but has never proved himself. Particularly when compared to three successful sisters.

Instead of Jones and Son he will create a sure fire new business Jones Brothers. Benny quits his day gig and buys in with life savings of $10,000.

We won’t reveal what happened next. Astrid whispered to me “I’m waiting for the shoe to drop.”

It did, big time, as we left the theatre saddened and subdued. But imbued by the power and majesty of a magnificent production performed by wonderful actors guided by a superb director.