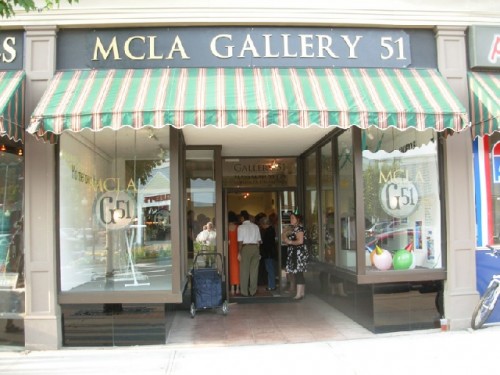 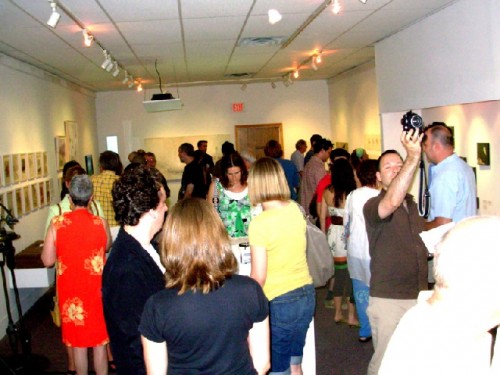 The hot and steamy gallery was packed for the opening. 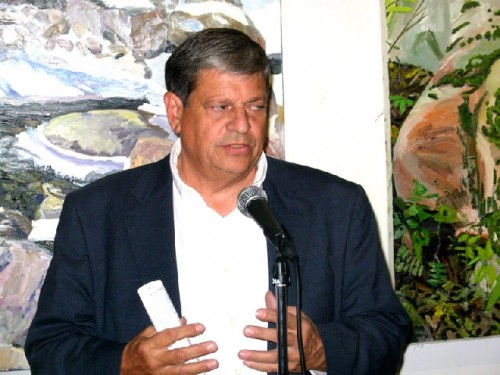 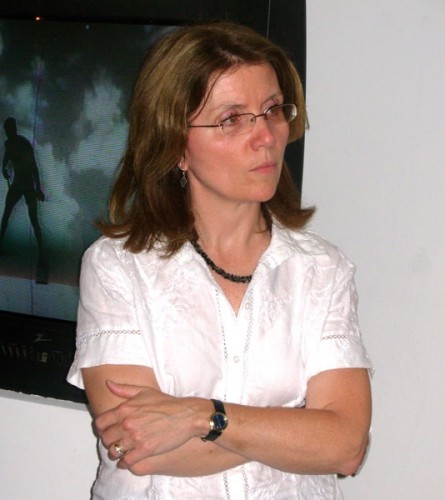 Mary K. Grant is President of MCLA and has ambitious plans for its future. 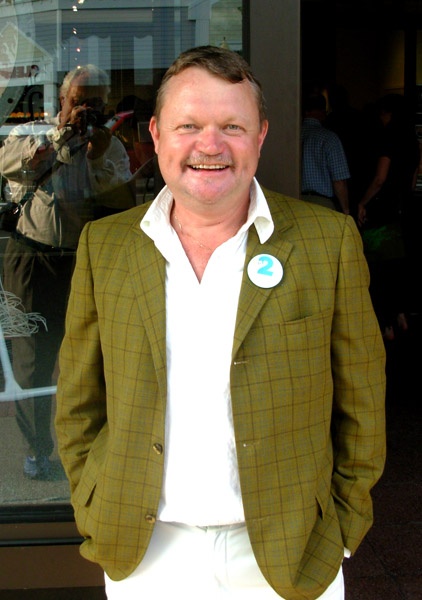 Jonathan Secor programs the arts and special events for MCLA. 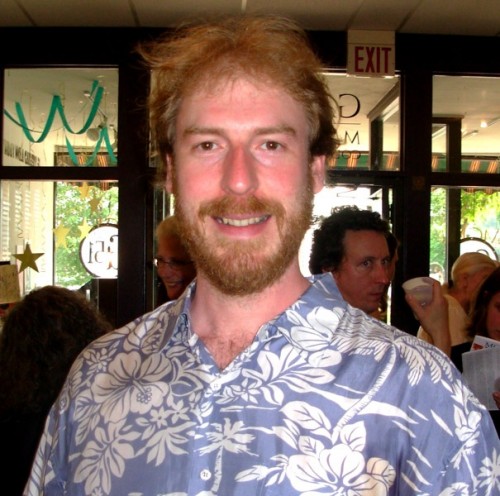 Greg Scheckler is acting chair of the Department of Fine and Peforming Arts at MCLA. 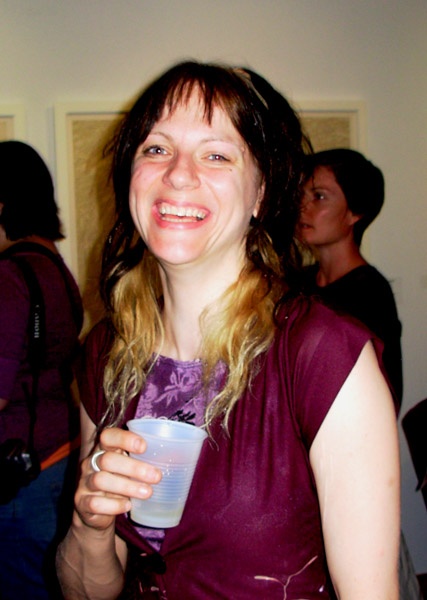 Heather Hezzie Phillips the head of CAC which is seeking a new home was a juror for the exhibition. 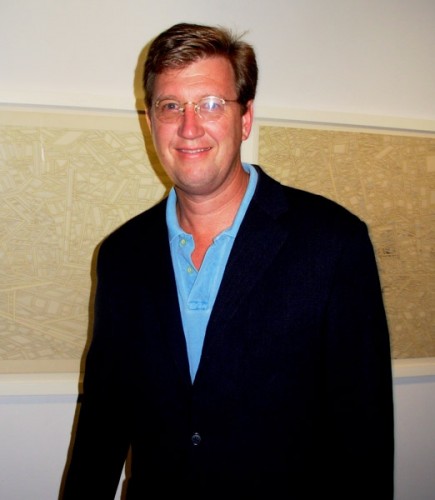 JoeThompson the director of Mass MoCA attended the opening. 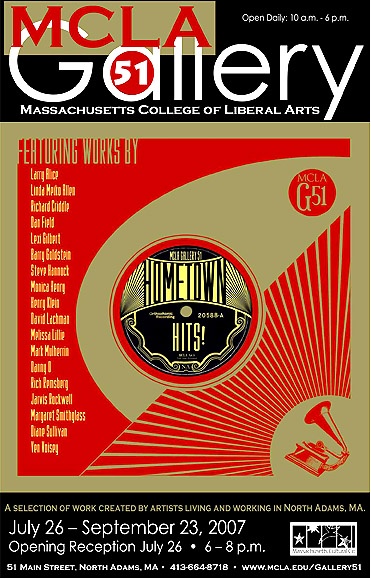 The poster for the exhibition. 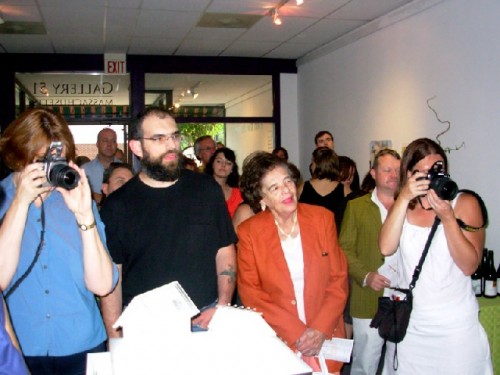 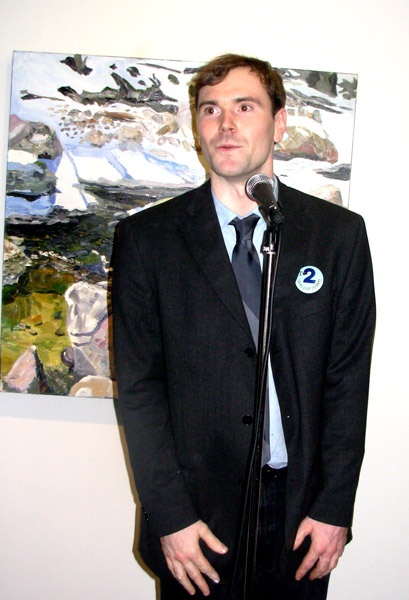 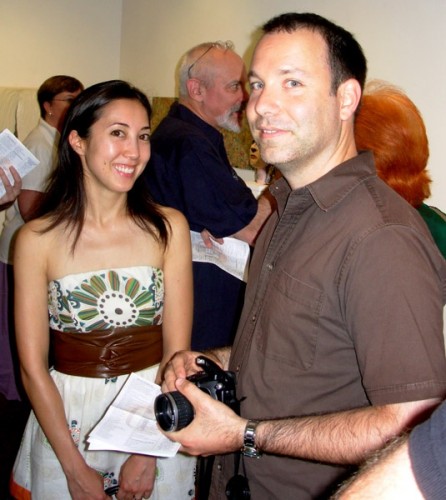 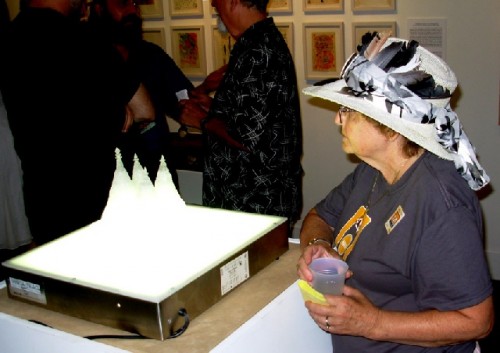 Checking out work by Margaret Smithglass. 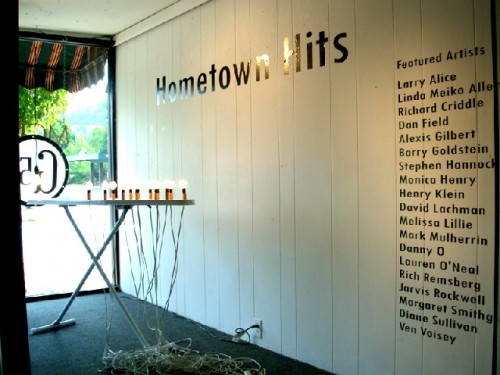 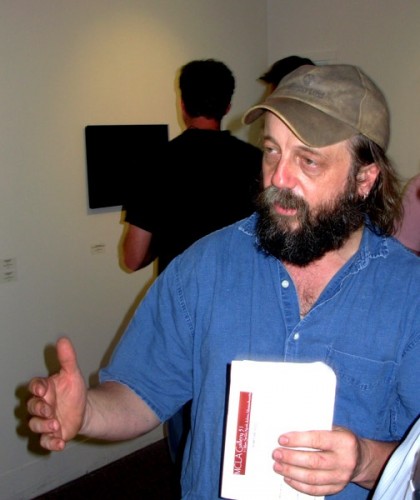 Artist Richard Criddle is the head preparator at Mass MoCA.

There were cake and champagne as well as remarks on the occasion of the Second Anniversary of  MCLA Gallery 51 for the jam packed, hot and steamy opening last night of a selection of  "local" North Adams based artists "Hometown Hits" which remains on view through September 23. The great and sustained success of the gallery on Main Street reflects the considerable vision and efforts on the part of the college, the city administration and a range of public and private funders.

In his opening comments Mayor John Barrett III, acknowledged that he is a graduate of MCLA and a former elementary school teacher. When plans developed first for Mass MoCA and later for the enrichment and expansion of Massachusetts College of the Liberal Arts, he emphasized that arts education would be an important mandate above and beyond the once or twice a year visit of children in public schools  to the Clark Art Institute. He added that the arts and a growing arts community would be an important aspect of the overall strategy to turn around a depressed city. He noted that five art galleries had failed in recent years and that the city was just not ready for them. He acknowledged the fine work of Kolok Gallery and the success now of  Gallery 51. Add to that the artist run Eclipse Mill Gallery. One of those recent closings is the Contemporary Artists Center which is negotiating for a  new space having ended a long term agreement with Eric Rudd's Beaver Mill.

Mary K. Grant, the President of MCLA, spoke of the importance of the arts as a part of the college, its growth and development. Gregory Scheckler, the acting Chair of the Fine and Performing Arts Department noted that for the coming year there are over 400 registrations for studio and art history classes. The actual number of students is smaller as majors in fine arts are signed up for several classes each. But he added that there are strong numbers for music, theatre and the performing arts. Jonathan Secor, who formerly programmed performances for Mass MoCA, now runs performance and special projects for MCLA of which the gallery is a part of his overall responsibilities. He noted that in the past two years the gallery has presented 19 exhibitions involving about 150 artists and has drawn approximately 7.000 visitors. The gallery, which is managed by Sean Riley, also provides administrative experience for college interns and students enrolled in the growing arts administration program.

The current exhibition which presents the work of 19 artists who live and work in the city of North Adams offers a succinct glimpse of the quality of what is being produced here. It has long been hoped and speculated that the presence of Mass MoCA, the Clark Art Institute and Williams College, in addition to affordable living and studio space would attract a growing number of serious artists. The artist/ entrepreneur, Eric Rudd, who owns the Beaver Mill where artists rent studios, and who developed the Eclipse Mill which now houses more than 40 units for artists, has long predicted that the city would be home to between a hundred and two hundred artists. Already, as the MCLA gallery and its current exhibition demonstrate, these artists are making a significant cultural and economic impact on the continuing growth and development of the city.

Despite all of this positive energy there was an avoidable blunder that cast a dark cloud over what should have been an upbeat celebration. The fatal mistake in the creation of this exhibition was to put in place a three person jury of gallery manager, Sean Riley, Heather "Hezzie" Phillips, the director of CAC which is cultural institution in transition, and Lisa Nilsson, an artist and former board member of the Eclipse Mill. The jurors all live and work in North Adams with close ties to its artists.The norm for a jury such as this is to bring in outside jurors and to avoid conflict of interest in the selection process. Since the exhibition focused on artists in North Adams it would not have been difficult to recruit jurors from neighboring Williamstown, Adams or Pittsfield. Or even way far away like Stockbridge or Great Barrington. With a limited budget fees were an issue and the local jurors volunteered considerable time and effort.

The jurors have stated their intention to look in depth at the community. In this process the artists did not apply or send slides in the usual manner and in a number of cases received requests to open their studios for visits by the curators. There was a mandate for the individual jurors to seek out artists and work they were not already familiar with. The stated intention was to provide a fresh eye to the local community and to be conscious of not coming up with the usual or familiar list of artists and to make discoveries of emerging artists.

MCLA Gallery 51 Manager Sean Riley said the exhibition will feature eight artists who are new to the gallery.  "Instead of MCLA Gallery 51 just choosing its friends for a group show, I wanted to create a team that would go out and sample the whole of the artistic community in town and then choose the work that would give us the strongest exhibition," Riley said. "When we sat down as a team and started
putting together our list of artists we quickly came up with over 50 names. We realized we had our work cut out for us; there are a lot of artists creating work here in North Adams.  This show is a great sampling of some of the best artwork being made in North Adams right now."

Artist and show curator Lisa Nilsson said the curators made a point of visiting the studios of artists they had not met before. "I saw quirky sci-fi videos, elegant reed sculptures, large scale illuminist landscapes made in big loft spaces, small outbuildings and front parlors that were destined to be shown on You Tube and the Met," Nilsson said. "Our criterion for choosing the art was really quite
elemental Â– we gravitated toward strong work that struck us as genuine, personal and unselfconscious."

Despite good intentions the results of this process have been divisive. Of course the 19 invited artists are pleased to have their work shown. And to them, congratulations. But part of the rhetoric of the show such as "Hits" and statements that this show represents the "best" of what is being created in the local community has proved to be hurtful and offensive to artists who were either never considered or contacted or those who welcomed the curators to their studios only to be rejected. Among these are artists with considerable professional credentials and exhibition histories with venues far more prestigious than Gallery 51. If the accepted artists are the "Hits" and "best" then what does that make of the thirty or more artists who were denied? Are they the "rejects" or "second best" artists of North Adams?  And how to take being turned down by a neighbor (one of three jurors) while her husband made the cut? He may indeed be well qualified but to avoid any perception of conflict of interest it would have been appropriate to recuse him from consideration. There are other shows.

These remarks are not meant to cast in any doubt the quality of the exhibition. For the most part it is very good. Particularly when selected from a small sample of just fifty artists. Do I agree with every decision? Of course not. About a third of the work represents the well worn trend for the naive, outsider and primitive in contemporary art. I have never taken much interest in this genre but it has its merits and defenders. It was significant to learn in the brief descriptions of works by the artists that one piece represented the very first drawing by the artist in question. That seems remarkably generous and prescient of the jurors.

Every professional artist is familiar with the process of applying for exhibitions and grants. We all have a track record of times when we have been accepted as well as rejections. On occasion I have also been invited to serve as a juror, at times as a part of a team, as well as individually. But the common assumption is that the jury process is fair and without prejudice or conflict. Have I selected artists I know and given them awards? Of course. Have I been selected by jurors I know? Naturally. There are also shows I would never apply to because I know that the juror in question has not responded to my work favorably. Right or wrong this is all a part of the system. And there are always eyebrows raised when jurors select their friends and neighbors as well as resentment at being rejected by them.

These arguments and conflicts pervade the art world. But rarely has it felt so local and personal.  So while Gallery 51 and its jurors were well intended to celebrate and recognize a growing arts community they may have inadvertently done more harm than good. Last night, for example, while the exhibition was crowded and upbeat too many local artists were all too conspicuous in their absence. So this was one step forward and a few steps back. Let's hope that the arts community can learn from this mistake.