No Rust on Aging Fagen and Becker 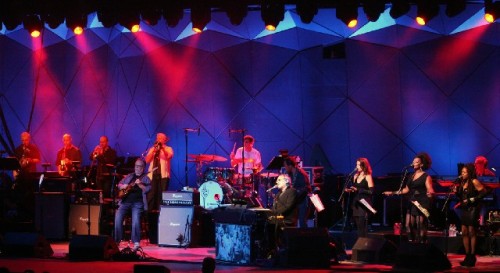 Steely Dan on stage at Tanglewood. Hillary Scott photos courtesy of the BSO. 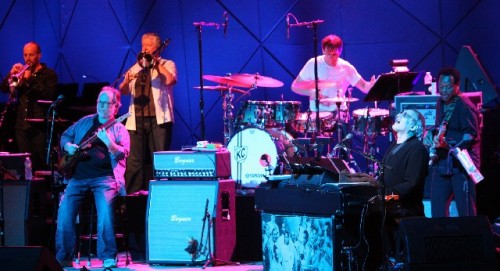 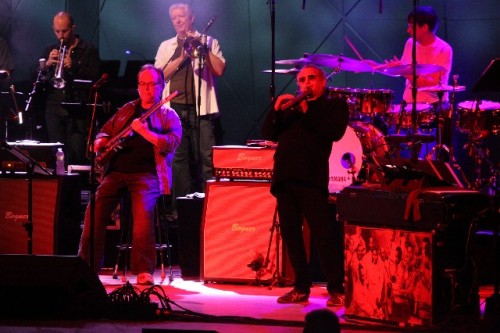 Becker and Fagen formed Steely Dan in the 1970s/ 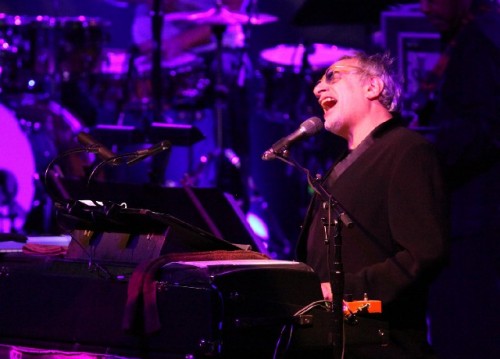 On an “off night” at Tanglewood the geriatric rockers Donald Fagen and Walter Becker not only filled the shed but blew the roof off with their ten piece jazz band and three female backup singers.

The band proved to be a perfect match with Tanglewood which is experimenting on bringing more rock, other than franchise folkie and underwriter, James Taylor. The season opened with a strong turnout for the perennial Earth Wind and Fire. In addition to Steely Dan we will hear the younger Train which plays what is described as tasteful rock. No heavy metal and hard core rock need apply.

But there are lots of rock and pop acts with broad appeal whose fans are not likely to trash the hallowed ground. Last night proved that a good time can be had by all as well as a decent box office. On a dark Tuesday that’s a nice windfall for the cash strapped BSO. Particularly, in a season when its artistic director, James Levine, went AWOL.

While Steely Dan may have peaked in the 1970s for the plethora of fans that gathered to hear the vintage duo it was just awesome.

The evening started at 7 PM with a forgettable opening act that was mercifully brief. We had barely finished supper and rushed to Lenox. For what?  The town puts an early curfew on rock acts. Can’t keep folks up late particularly on a work night. In reality the band came on at 8 and two hours later they were still going at it.

No rust on Steely Dan.

It seems that Donald Fagen and Walter Becker met at nearby Bard College. Which explains why one of two rap pieces, by guitarist Becker, included references to going out on a movie date in Great Barrington.  He didn’t mention it by name but we assume he took in a flick at the venerable Mahaiwe. Just think. The ersatz song focused on what comes after a movie date including some raunchy lines that we would rather not quote. It depicted Becker as a nerdy guy who doesn’t score all that often. Even for a rock star.

After kicking around in the usual assortment of college bands they went on the road with Jay and the Americans. They started to write and peddle songs in the famous Brill Building in New York. Finally gaining traction and releasing successful albums in the 1970s. They were never much of a touring band and still have an awkward stage presence. Becker is a non factor other than superb lead guitar. Fagen with his sharp, hawk like profile, which we saw all night in profile as he hovered over an electric keyboard, has a vintage hipster demeanor.

They played a lot of music with little patter in between. It proved to be a dense and compelling set. But the sound mix was not all that great. At one point Fagen just stopped, mid song, and complained about a buzz from the amps. He couldn’t hear the monitors. That was worked on with mixed results. Fagen’s voice was mostly lost in the mix and seemed to be balanced at the same level as the three backing vocalists. So if you didn’t know the songs it was next to impossible to distinguish the lyrics.

It was a nice concert but technically a muddle. We were close to the stage so I can’t report on the sound out on the lawn. The Shed is a space designed for the subtle sound of the BSO and not for loud rock ‘n’ roll. By contrast the mix for James Taylor has always been just fine but he doesn’t crank up the decibels. Even Crosby, Stills and Nash, last summer, which most folks thought were terrible (a friend walked out) sounded sharper than Steely Dan.

Yes, I really enjoyed the music and the nifty arrangements but it would have been nice to have understood Fagen’s usually more compelling lyrics.

During the peak of their recording activity they mostly became a studio band. There were some 41 personnel changes. It was their practice to hire the best session musicians and spend endless time in the recording studio striving for perfection.

The current tour is dubbed Shuffle Diplomacy Twenty Eleven. It started on July 2 in Seattle and, after the U.S., will continue in Australia and New Zealand ending in November.

In particular the audience was thrilled by the energy and drive of the drummer Carlock. I found the few trumpet solos of Leonhart particularly tasty. Toward the end of the set the solo spotlight focused on the electric keyboard of Beard. He also played effectively on grand piano.

The richly complex arrangements evoke discussion of attempts to create a fusion between jazz and rock in the late 1960s. It started with jazz guitarist Larry Coryell and culminated on the 1970 double album by Miles Davis called Bitch’s Brew. Parallel to that was the rock band Blood Sweat and Tears of Al Kooper later with lead singer David Clayton Thomas. It used a horn section and excited rock fans with jazz roots. Another band of the genre Chicago was formed in 1967.

After Bitch’s Brew Miles vectored off to an experimental era not fully appreciated by mainstream jazz fans and critics who focus on his earlier, pre fusion work. On a creative level after 1970, when I heard Miles on numerous occasions, he was always pushing the envelope.

Of the jazz rock groups Steely Dan has endured and the music continues to sound fresh and relevant. When was the last time you listened to Blood Sweat and Tears, Chicago, or, yuk, Spyro Gyra and Kenny G? Or Mahavishnu Orchestra and Weather Report for that matter. While I keep returning to the post BB era of Miles.

Last night was the first time I saw Steely Dan live. As it was for a majority of the fans. It was a great experience and let’s hope they come through the region on another tour before we all croak.