Adapts and Directs The Torch Bearers by George Kelly 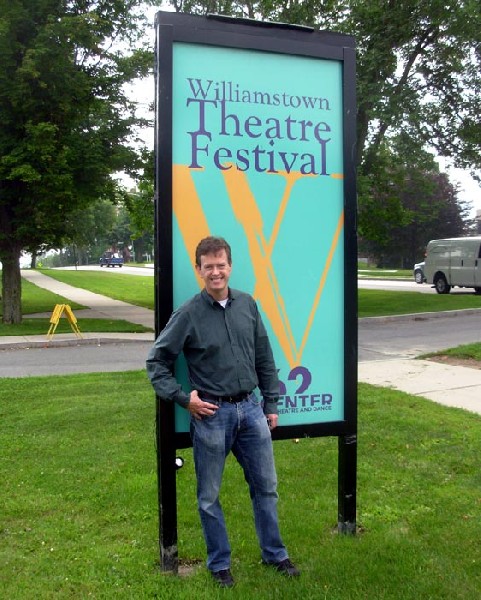 Dylan Baker started at WTF in 1983 as a non equity actor. Giuliano photos. 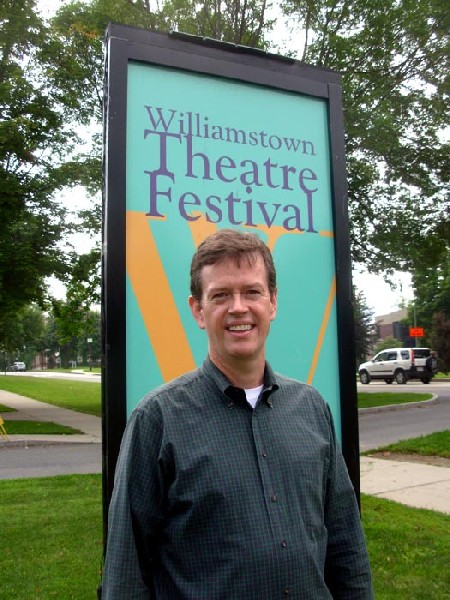 He returns to WTF this season with "The Torch Bearers." 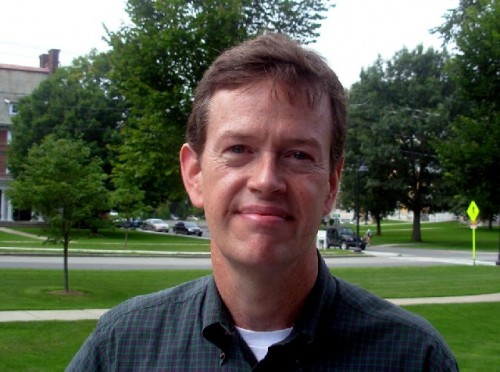 He has appeared in films like "Spider Man" and on TV in "Kings" and "Law and Order." 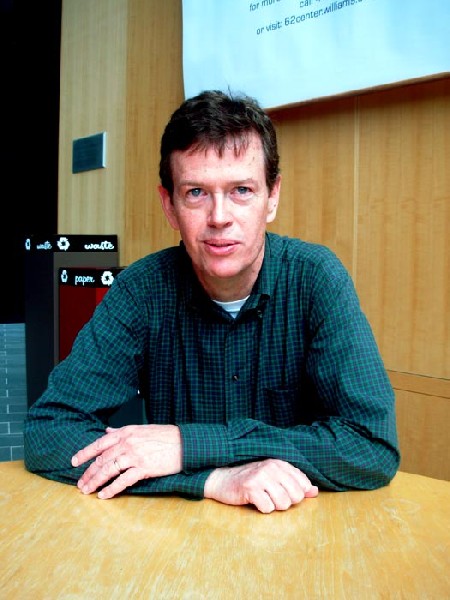 When not in the theatre he "works in a car wash." 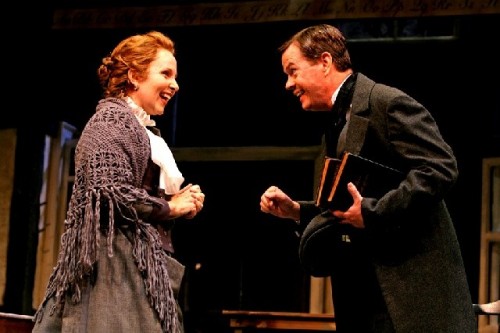 We caught up with the actor/ director, Dylan Baker, taking a break from rehearsing George Edward Kelly's "The Torch Bearers" a comedy that was a huge hit in 1921. Before taking his adaptation, with an entirely new production to the Williamstown Theatre Festival, where it opens this week, he enjoyed a successful, five week run, Off Broadway at Greenwich House on Barrow Street in 2000.

The star of that production, Marian Seldes, was originally announced to reprieve her role as the flamboyant spirit of amateur theatre, Mrs. Pampinelli. With her dropping out of the show I asked Baker, as we settled into the lounge at the 62 Center, if this was a mountain to climb? There was a typically warm and upbeat smile as he acknowledged that yes, it is a huge loss to have her drop out, but he has every confidence in a show he has previously adapted and directed with great success now with a superb new cast.

It was a surprise to find him so open and engaging. In the past few weeks I had gotten used to the nasty side of Baker as the villain, William Cross, in the NBC series "Kings." I asked if he was written out of the show which recently aired the final episode of the season. "No that's it" he said.  The show, which premiered on March 15, 2009, was pulled after several episodes and then concluded a run in June and July. "The network didn't have much confidence in the show. But I talk to people like you who became interested and followed it." His son in the series was played by Macaulay Culkin as a nasty little bugger and Baker's wife, Becky Ann, was also cast in the show. She will appear in WTF's "Torchbearers."

In addition to theatre and television, he just appeared in an episode of "Law and Order," he has been cast in  two "Spiderman" films. For such a nice guy it is odd that he often portrays villains. I was curious about how he managed to sustain a life in theatre and raise a family. What happens when a TV series is cancelled after a season? Do you earn enough to tide you over? Staring me down with a wonderful smile he stated that when not on stage "I work at a car wash." It was a good line but he followed by stating that "I've been lucky." Asked to elaborate he said "You do TV and films for the money and theatre for love. Theatre doesn't pay all that well. A couple of years ago I had three plays in a row from July to July. I worked for 54 weeks with one day a week off. On those days I flew out to LA on fishing trips looking for work. You work at this 365 days a year. When you are not working you're working at looking for work."

It started at William and Mary College, in Williamsburg, Virginia. The first week on campus he auditioned for a part in "The Clouds" a comedy by Aristophanes. "It was a really awful play. Not the play, but the adaptation and production. Instead of clouds we wheeled Socrates around in a shopping cart. I chatted with a woman in the play dressed in a two piece outfit with feathers. She said to me 'You know Dylan this is really pretty bad.' But I didn't think so. For me it was just wonderful to be on stage when the curtain opened in an 800 seat house. She said 'This is the worst thing we've ever done' but I thought it was just great." Show biz.

He was impatient and left W&M after two and a half years. He completed his degree in Dallas at SMU. Followed by an MFA at Yale. He quipped that it was Southern Method Acting and that the acronym for Southern Methodist University Theatre was SMUT. The jokes are obviously ancient but it brought out his playful side. He reflected on humor today which is also more honest and forthright. "In today's political scene" he said. "It is not surprising to find a politician in a love triangle with a chimp and a cab driver." What an image. "I come from New York and am used to seeing everything." Like Elliot Spitzer I suggested. The response was serious. "I was on board with him and respected him. When he had his downfall people who were close to him spoke behind his back that he was a tyrant. He is a complicated guy and did a great job as Attorney General."

Turning to "The Torch Bearers" the play is opening at a critical juncture in what has been a tough season for WTF. In addition to taking a hit over the last year on its finances the programming this season has been problematic. The five new shows that were staged in the Nikos Theatre last season have been reduced to three. While three of the new plays last year- "The Atheist" "The Understudy" and "Broke-ology"- went on to Off Broadway that does not appear to be the case this time. Both "Knickerbocker" and "What is the Cause of Thunder" opened to mostly critical reviews.

Not surpisingly, Baker sees it differently. Even though the bad economy reduced the number of shows the new works in the Nikos Theatre demonstrate "Nicholas Martin's commitment to presenting new theatre. I enjoyed both plays even though they still need work. This is about being a Festival."

Baker discussed the tradition of WTF as a family which reunites people who have worked together over the years. It is a part of the inspiration of his ambition for "Torch Bearers." He said that "When Nicky picked me for this season it was great to come back (for the 11th time). That's what we love about WTF. Like working with Yusef Bulos who was here in the 1980s. I started in 1983 as non equity and then Nikos brought me back later as a part of the Equity Company. Nikos had a core of character actors like Yusef and others who came back year after year and filled out the plays. They would do several plays in a season moving from one to another. It was that stage experience that I loved and I want to bring that to 'Torch Bearers.' "

Two years ago he appeared at WTF as The Squire with Kate Burton in "The Corn Is Green." Burton appeared with her son Morgan Ritchie. Baker and his wife had seen him grow up over the seasons at WTF.

Coming into the home stretch of the season for WTF we could all use a few laughs. Which Baker intends to deliver. But what played well to audiences in 1923 does not prevail today. The third act was particularly rough as the husband wails on his wife. An audience in the '20s thought that was funny. He has reduced the play from three acts to two with two scenes each. In adapting the play "I focus on the comedy" he said. The play was a great hit and launched Kelly's career on Broadway. The next play "The Show Off" was also a hit and Kelly was short listed for a Pulitzer Prize. "But there was no way that they would give a Pulitzer to a comedy at that time. He later won a Pulitzer for 'Craig's Wife' in 1925. Everyone thought he was on his way to becoming another Moss Hart. But he was a serious playwright and stopped writing comedies. The public stopped watching his plays."

Having adapted and directed the play previously we asked is he planned anything different for WTF? "Yes, I learned a lot while doing the play in New York. I kept honing the script. This is what we are working with now." In addition to acting this is his 12th production as a director including 5 for the New Jersey Shakespeare Festival. He has directed two plays Off Broadway and this is his second time directing at WTF. The last show was "Christmas in Naples." Now on with the show.