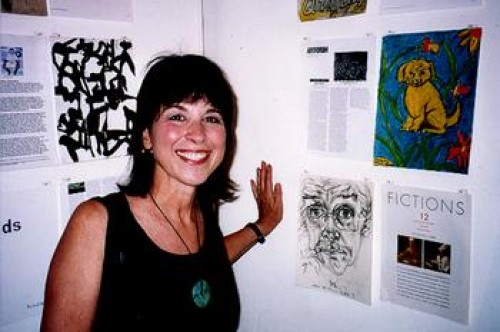 Francine Koslow Miller next to her dog piece in a NY show of works by critics. Giuliano photo.

With sadness we learn of the passing of Francine Koslow Miller, PhD a Boston based art historian, critic and curator.

Our lives and careers overlapped from the distance of a decade. I graduated from Brandeis University in 1963 and Francine a decade later in 1974. There she studied modern and contemporary art with Carl Belz the director of the Rose Art Museum.

She remained loyal to Belz and was a speaker for his retirement gathering at the museum.

In 2009 when the former Brandeis President Yehuda Reinharz moved to sell off the collection, then worth some $350 million, and close down the museum Koslow was among those who fought against it.

Ultimately the scandal and universal condemnation of that ill conceived move backfired with the removal of Reinharz and the salvation of the museum.

He later apologized in a letter to the Brandeis community stating in part that “I take full responsibility for causing pain and embarrassment in both of these matters. To quote President Obama, ‘I screwed up.’ ” (Quoted from The Boston Globe February 5, 2009)

That made Koslow Miller’s 2012 book Cashing in on Culture: Betraying the Trust of the Rose Art Museum a moot point as it appeared after the resolution of the conflict. As a reference for the history of the university and its renowned museum, however, it is well researched, useful and fact filled.

Having earned a master’s degree in art history from University of California, Berkeley our paths crossed when she went on to earn a PhD from Boston University in 1981. Her research topic was the sculptor, Henri Gaudier-Brzeska (4 October 1891 – 5 June 1915). He was the subject of a 1931 book Savage Messiah which was the source for the film of the same name by the British director Ken Russell. We were in some courses together at BU.

She held a number of teaching appointments including Mass College of Art where she was promoted to the position of professor.

As a critic and essayist she wrote exhibition catalogues for artists and organized special exhibitions. She was respected for taking a serious and scholarly approach to these assignments and projects.

Francine was not always tactful. When she became the Boston contributor to Artforum, starting in 1988, she allegedly told artists and friends that she had taken Nancy Stapen’s old job.

During her too brief life and career Stapen who wrote for Art New England, The Boston Globe, as well as Artforum was widely regarded as arguably the best and brightest Boston art critic of her generation.

For a time Koslow Miller headed the Boston chapter of the International Association of Art Critics (AICA). She organized meetings and an annual awards ceremony that was popular and well attended. I won an award which meant a lot to me and the artist. That recognition was made possible through her efforts. She also represented our regional chapter during national meetings of the organization.

In the Boston art world she was known to be unpredictable and complex. Nobody doubted her passion, loyalty to artists she favored, and commitment to the highest standards as an art historian and critic.

What follows is a summary of her positions and accomplishments.