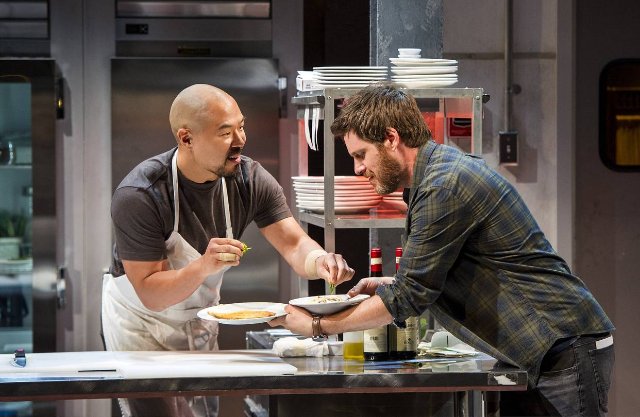 In the kitche with chef Harry and investor Mike. Rader WTF photos. 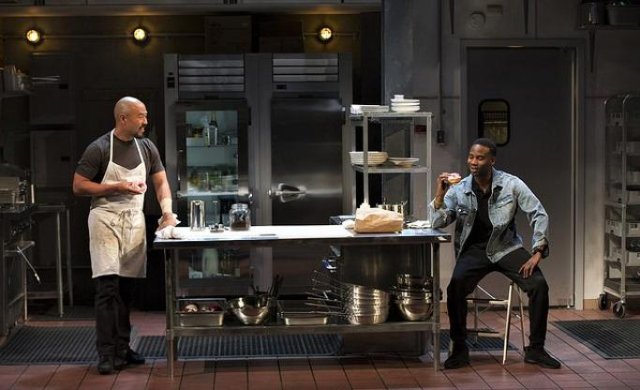 The scene, meticulously designed by Tim Mackabee, is the tight but efficient kitchen of a 16-seat, Brooklyn, boutique, neighborhood restaurant.

It’s two and half years in for the team of investor Mike (Michael Esper) and talented, temperamental chef Harry (Hoon Lee). There is a single waiter Rodney (W. Tre Davis) who, a plot point, proves to be a keen observer with a superb palate. The wildcard in this skeleton crew is the sexy, ruthless consultant Emily (Krysta Rodriguez). She has been dressed with chic panache by Tilly Grimes.

They are barely making ends meet but Harry, obsessed by preparing exquisite food with fresh ingredients, is perfectly content with the status quo. He is living a dream. For Mike, who has put his life savings into the venture, there is upside to be explored. Hence Emily.

The initial hostile response of Harry is what is this woman doing in my kitchen? It's gets worse from there.

There are no reservations or printed menus as it changes daily. A capsule, happenstance review in New York Magazine has led to sold out services. In particular, he raved about the scallops. Hip foodies are coming for the scallops.

On that particular day, based on best of the market, they were served. Harry is up at dawn choosing from vast New York markets. As marketing hype Emily states that it's ‘locally sourced.’ That’s the PR mantra of celebrity TV chefs. Emily knows that it is better to sell the sizzle than the steak. For chefs that's sacrilege.

Fad culture has led to a feeding frenzy for Michelin star restaurants, which most of us can’t afford. An alternatuive is neighborhood boutique popups with aspiring chefs. The trick is for chefs to say a step ahead of fickle foodies. Their adulation results in frenetic openings and closings. In this ratrace few survive. Those who do tool about on private jets and drive hand-made, locally sourced sportcars.

For those on the make it means 18 hour days. Dawn in the markets, then hours of prep, leads to intense service. It’s a brutal grind often fueled by drugs, alcohol and bipolar disorders. With no time for romance there is the occasional quick shag.

For my generation, the ultimate romance has been a life in the arts. Now, instead of RISD or Yale, hip kids attend culinary school or break in as dishwashers and line cooks.

That’s how the late Anthony Bourdain started during a smack fueled summer in P’Town at the renowned Lobster Pot. His memory hovers over this production. The cussing and cursing chef Harry, however, more vividly recalls the brilliant, innovative, foul mouthed Paul Chang. Even top chefs are challenged to bring affordable, high concept food to neighborhoods like Brooklyn. Apartments, if you can find one, go for megabucks in formerly working class communities.

We hear a line that a table for four has a $700 bill including wine. plus tax and tip.  That’s way above our paygrade but chump change for NY Yuppies.

It’s a subculture that, with her usual brilliance, playwright, Theresa Rebeck, has tapped into and skewered with signature aplomb. If there is a scintilla of foodie in you this is the summer’s smash hit comedy that’s not to be missed.

This is the third premiere for Rebeck at Willismstown.  The others were The Water’s Edge and The Understudy. Shakespeare & Company did her one woman show Bad Dates. In the region, however, her new work is most often seen at Dorset Theatre Festival in Vermont where she is a neighbor.

In addition to hilarious humor what typifies her work in Seared at WTF is the constant element of surprise. Even in a confined space the dialogue fires up not just scallops but the furious pace of an intense evening service. There are so many unanticipated reversals that you are worn out by the end of the show. Through two acts I never once checked my watch.

Chatting with fellow critics during intermission, however, I quipped “He should have served the scallops.”

Diners have flocked to the restaurant for the scallops raved about in the review. But they just happened to be served that day. He refuses to cook them for the rest of his friggin life. Mike, desperate for monetizing his investment, says that he can run out and get some frozen ones. Like Job’s wife, he might better have said to his partner “Curse God and die.”

The mantra of chefs like Harry is to serve only what is fresh and best that day. Only rarely do scallops that meet his standards show up in the market. What, he argues, is the point of serving them if the dish is second rate? Mike argues, correctly, that the average client won’t know the difference. How true. On the other hand, we have all gone to restaurants with stars and great reviews to have meals that sucked. Nothing is worse than terrible, slow, rude and inattentive service. Waiters can be terrible snobs who love to stiff the rubes. Like Caravaggio, I have longed to kill the occasional waiter.

As the slick, chic and super smart, connected up the wazzooo, “consultant” Emily knows the tricks of how to flip a hole in the wall into a cult, cash cow destination. Initially, Harry hates everything she stands for. Like everyone else he falls for this kitchen Mata Hari. She gets whatever she wants.  If that takes a tumble in the hay then chalk it up to the cost of doing business.

Because she knows somebody, who knows somebody, things happen fast. In just one day she secures a permit for sidewalk tables. Overnight, the capacity doubles. Which means that service entails twice as many meals. Shit happens and every action by Emily means a reaction from Harry.

We come to truly care about the characters so well directed at a dizzy pace by Moritz Von Stuelpnagel. There is that terrific dialogue from Rebeck but set onto the players with wonderful skill and nuance.

As Harry, Lee is flat out over the top from the get go. In conflicts with Mike, Esper deflects and absorbs the screed with Tai Chi mastery. His role is so understated that we hardly note his presence. But he is the constant setup man as Lee knocks it out of the park.

Rodriguez is a paradigm of a glamorous, seductive, manipulative careerist. Like Harry, we wonder about the cost of her services and the prospect of her backers and investors. Just what is her Machiavellian end game? Rebeck never tips her hand which make the performance all the more absorbing and compelling.

The wild card that ultimately flips this play is the single employee, the waiter, Rodney. He proves to be the ultimate card up the sleeve of Rebeck. He has a moment that stops us in our tracks. It’s amazing but we won’t spoil the fun.

Rebeck has flavored him with setups if we are astute enough to taste the clues. He is indeed not your typical art school waiter. This is no kid with a BFA living in Brooklyn.

Emily has insisted that Harry concoct a new signature dish if he refuses to cook scallops. He comes up with wild salmon and an onion chutney. With marketing panache she wants to jazz it up with exotic terms. It’s delicious, and while under development, she insists that it be on the menu that night.

But it’s wild salmon which is as hard to find as the best scallops. Then how about farm raised salmon? Oh boy, here we go again. A battle, no make that WWIII, ensues.

Rodney passing through the kitchen takes a taste. They are astonished when he says that it’s ok but the chutney, which has too much anchovy oil, would be better paired with farm raised salmon. Duh!

After that folks it’s off to the races. Seared is the nag to put your moolah on. It’s a total winner and pays off a hundred to one.