The Chosen by Chaim Potok and Aaron Posner 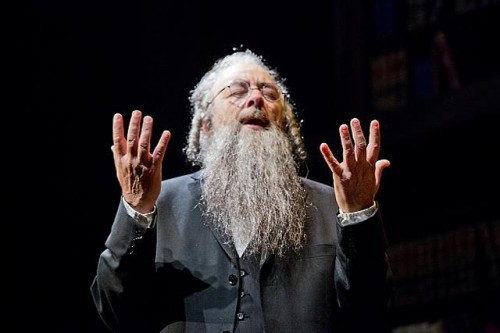 Richard Schiff as the Tzadik of a sect of Hasidic Jews. 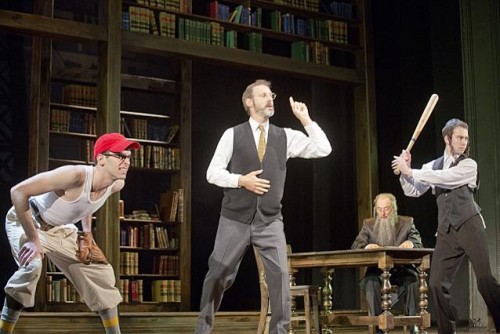 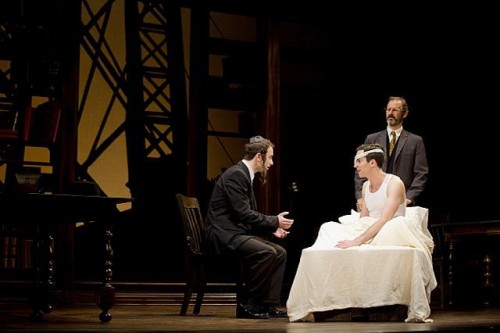 An accident sends Reuven (Jeff Cutler) to the hospital. 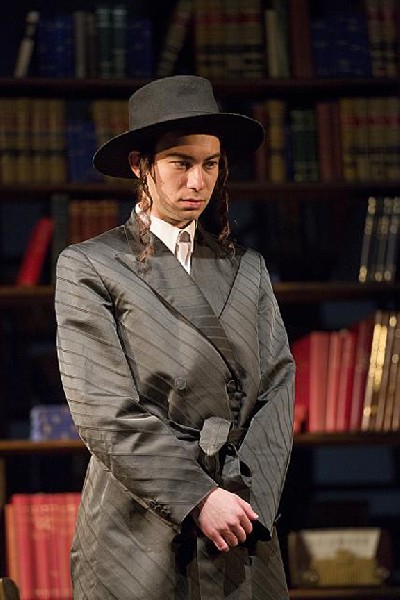 Daniel (Ben Rosenbach) is The Chosen destined to succeed his father as Tzadik. 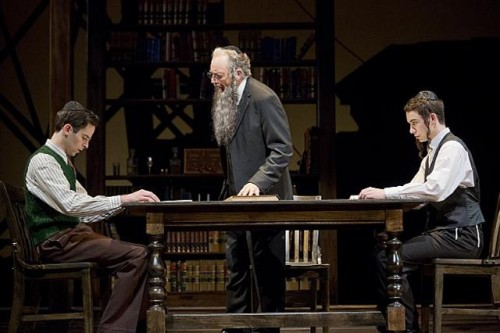 The Tzadik tests the boys in their knowledge of Talmud. 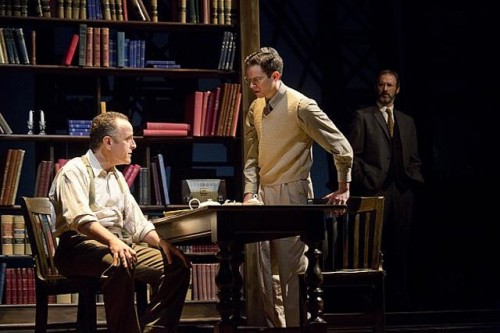 Daniel and his father David (Adam Heller) a Talmudic scholar.

The novels of Conservative Rabbi Chaim Potok (February 17, 1929 – July 23, 2002) The Chosen (1967), The Promise (1972), My Name Is Asher Lev and others conflate an overview of Orthodox and Hasidic Judaism, in the Williamsburg community of Brooklyn where he grew up, with humanistic insights that relate to the broadest range of readers and audiences.

The Chosen was made into a film in 1981, and a short-lived off-Broadway musical was produced in 1988. It closed after a week of performances. The book was adapted into a play by Potok and Aaron Posner. It premiered  in 1999. For Barrington Posner has directed a definitive production of the play with a superb cast.

In 2011, on the smaller of its two stages, Barrington presented My Name Is Asher Lev for a sold out run. While widely staged in regional theatres it opened Off-Broadway at the Westside Theater on November 28, 2012.The play won the Outer Critics Circle Award for Outstanding New Off-Broadway Play and the John Gassner Award.

Based on the audience response to My Name is Asher Lev, the production of The Chosen, starring Richard Schiff as Rob Saunders the Tzaddik or leader of a Hasidic community, has been programmed for the Boyd-Quinson Mainstage. There are just a few seats available in a run that ends on Saturday, August 3. Due to demand a matinee has been added for the closing date.

The position of Tzaddik has been passed to the firstborn son through six generations of the Saunders family. In that regard Daniel (Ben Rosenbach), who we meet as a teenager, is The Chosen to lead a sect of several hundred Hasidic Jews. But, as we learn, his interests and passions reach beyond the intensive, life long study of Rabbinical law. The Talmud, a compilation of Old Testament passages debated and judged by thousands of rabbis over the centuries, runs to 6,200 pages.

Without the permission, or seeming knowledge of this father, Daniel spends time in the library reading secular texts by Dostoyevsky and Freud. Other than to discuss an intensive study of Talmud there is a code of silence, a complex means of teaching, between father and son.

In the views of the elder Saunders, adhering to a narrowly defined interpretation of Judaism, those who do not pursue the Hasidic way are not true Jews. Derisively they are regarded as apikorsim a Yiddish word meaning unholy and unclean. Or, more insultingly, as Goyem Jews.

The founder of Hasidism, Israel ben Eliezer (1698–1760), became known as the Baal Shem Tov (the "Master of the Good Name", abbreviated "Besht"). His teaching shaped the Hasidic doctrine of the Tzadik or Rebbe (righteous leader who channels Divine sustenance to his followers). The particular Hasidic emphasis and interpretation of this earlier Jewish and Kabbalistic concept, became one of the ideas that singled it out from non-Hasidic Judaism. The Hasidic concept of a Rebbe also combines their role as a teacher of Judaism and charismatic spiritual example. To their followers they teach Hasidic mysticism, Kaballah, and interpretations of Biblical and Rabbinical Judaism.

In Williamsburg Orthodox and Hasidic Jews lived a few streets but worlds apart. Their boys, however, had a mutual passion for baseball. A game between two teams resulted in competition, rivalry, then a compelling bond between Daniel, a fierce hitter, and a pitcher Reuven Malter (Jeff Cuttler), the son of an Orthodox Talmudic scholar David Malter (Adam Heller).

During the game Ben smashes a line drive back to the mound knocking Reuven to the ground and shattering his glasses. A shard has pierced his eye and sent him to the hospital. Fortunately it is safely removed and Reuven will fully recover.

A remorseful Ben visits the bedside. This results in an uneasy confrontation but sows the seeds of a friendship. This eventually leads to an invitation to meet Ben’s father.

It seems that Reuven has a passion for mathematics as well as Talmudic study. Reb is intent on testing him before approving that his son has a friend outside of their rigidly defined community.

In the Hebrew alphabet letters have numerical equivalents. They figure into the mystical numerology of Kaballah which the Tzadik quotes from. Under pressure Reuven corrects the addition of a passage. Reb is suitably impressed then turns to interpretations of Talmud.

Ben, who possesses remarkable skill at memory quotes complex arguments and counter arguments. In these exchanges Reuven holds his own. Accordingly Reb not only approves but invites his son’s friend to live with the family when his father is hospitalized with one of several strokes. Reuven’s mother previously passed away.

By speaking to Reuven it seems that Reb is indirectly addressing his son. Reuven serves as a vital intermediary. The Tzadik believes that his son has the mind but not the heart to succeed him as leader. It is thorough the teaching of silence, not saying the wrong words, which Ben accepts and understands, that he will find his own way.

The fathers know of and respect each other as Talmudic scholars. They differ but want what is best for their sons.

The drama is set during World War Two which, over the four years of the boys coming of age, is nearing its end. The horror of the Holocaust is just emerging. With European Jewry decimated by the extermination of 6 million it is essential that there is rebuilding and a consequent need for Rabbis in America.

David is an advocate of Zionism backing the establishment of a Jewish state in Palestine. He gives a widely quoted speech to a capacity audience at Madison Square Garden. We are astonished to learn that to Reb founding a Jewish state by secular or Goyem Jews is a an outrage.

Ben meets with Reuven to inform him that his father has disinherited him from their home. They are never to speak again. There is a conflict but Ben is obedient to his father’s wishes. When Reuven’s father is again hospitalized he feels miserably alone.

When Israel finally is established, then attacked by the surrounding Arab world, there is a reconciliation. Reuven is again invited by Reb as a means of speaking to his son about a decision to leave the sect and study psychology at Columbia.

For the audience this is a complex and compelling evening of theatre. Most of us knew little or nothing of the enmity between different sects of Jewish fundamentalism.

These nuances are transitioned superbly through the device of a narrator and observer the mature persona of Reuven portrayed by Richard Topol. He plays a number of roles including a successful secular Jew who, in response to the Holocaust, has opted to join a temple.

Now committed to becoming a rabbi, rather than a professor, it will be the challenge of Reuven to bring Goyem Jews back to traditional teachings.

The majority of American Jews are Reformed. Unlike Orthodox Jews men do not wear Yarmulkes and women do not wear wigs or head scarves. When visiting Israel there are incidents at the Wailing Wall (the surviving fragment of the second temple of Jerusalem destroyed by the Roman emperor Titus during the diapora) when they are assaulted by the Hasidics as heretics.

Just as depicted in The Chosen there are conflicts in Israel over a secular, democratic government and those who would impose religious rule. That would be similar to Sharia Law in Islamic nations.

The mantra of The Chosen is etched into the proscenium of this Barrington production.

“Ayloo ve’ayloo deevray elokeem chai’eem.” (Both these and these are the word of the living G-d.) As the mature Reuven proclaims. It is a way of explaining how both boys, and the different traditions they represent, can be in the spirit of The Supreme Being equal and correct.

It is the loving gift of collaborators Posner and Potok, through the vehicle of a superb cast, that audiences emerge from an experience that expands our hearts and minds.