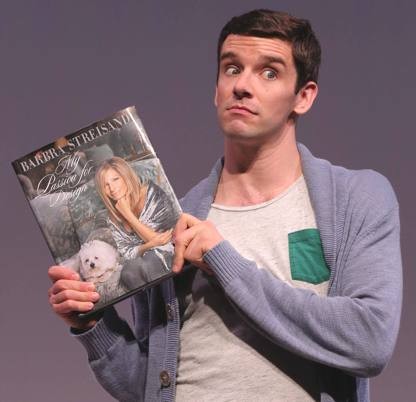 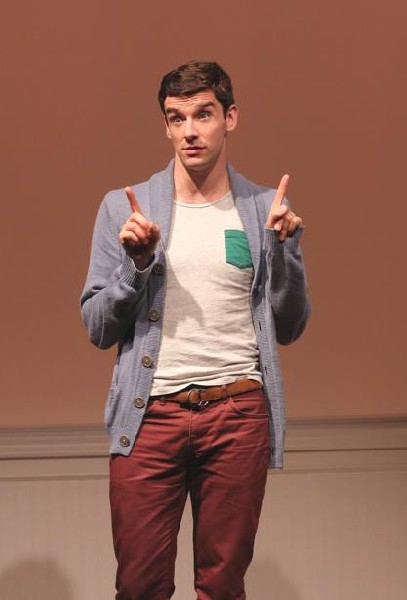 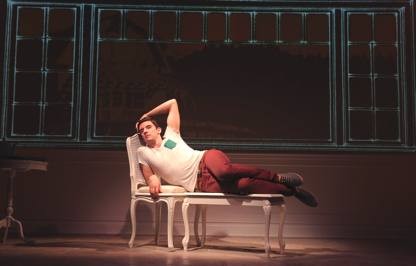 Taking it lying down.

Los Angeles’ Mark Taper Forum’s current West Coast premiere production of “Buyer & Cellar” is just a few miles from Dodger Stadium, home to those lovable lugs and expats from Brooklyn who are now in their fifty-fifth year of being the LA Dodgers   It just seems appropriate to stretch the baseball metaphor of hitting one out of the park when it comes to presenting a solid, smash-hit, one man production cleverly written by Jonathan Tolins, crisply directed by Stephen Brackett, and sensationally performed by stage and television actor Michel Urie, of “Ugly Betty” fame.

The wacky 90 minute satire, is pure fiction when it comes to the narrative, however, celebrity super-stars like Barbra Streisand often become the subjects of faux stories, books and plays.  Also, female super-stars like Garland and Middler, and Streisand have always had a love affair following within the gay community. The sly, tongue-in-cheek, and, at times, touching “Buyer and Cellar” comedy is careful to avoid having Jonathan Tolins become the playwright who exposes the here-to-fore unknown idiosyncrasies of “Babs”, in a mean-spirited way.  Quite the contrary. But I doubt that many non-Hollywood people knew of her Malibu basement personal shopping mall, complete with a frozen yogurt machine.

Tolins’ pays his homage to Streisand throughout in a tender way but doesn’t let her off the hook completely. Yes, I know Tolins’ basic premise is farfetched as if we are staring through Alice’s looking glass but it does allow us to peek into the lifestyle, however briefly of one of America’s truly “rich and famous” people.  “Remember, this is the part that’s real,” Urie says with an insouciant wink to the audience before he slips into character.

Actor Urie, is charged with the tricky job of juggling the publicly known facts about Ms. Streisand, and the made up stuff that he and playwright Tolins, along with director Brackett, display on the Taper’s stage.  Tolins creates the character of Alex More, a gay unemployed actor, who in an effort to just pay his rent, accepts a job as caretaker of Barbra’s underground mall where the customer is always right.  As its only customer Ms. Streisand is usually right, but not always.  Alex and Ms. Streisand have a quite a gabfest covering a variety of subjects.

Urie is out there all alone for ninety laugh-filled minutes talking to Barry, his gay screenwriter boyfriend, to staff members of the Streisand household, including James Brolin and La Streisand herself.  It’s a nimble, true, tour-de-force performance by a very talented actor.

Director Brackett and his creative team have focused the on-stage action to take place on a spare stage and set designed by Andrew Boyce, with lighting by designer Eric Southern.  The video projection design by Alex Koch, and sound design by Stowe Nelson, plus the single costume, jeans and shirt and Reeboks worn by Urie, is designed Jessica Pabst.  All are all solid efforts.

“Buyer and Cellar” performs at The Mark Taper Forum through August 17, 2014.