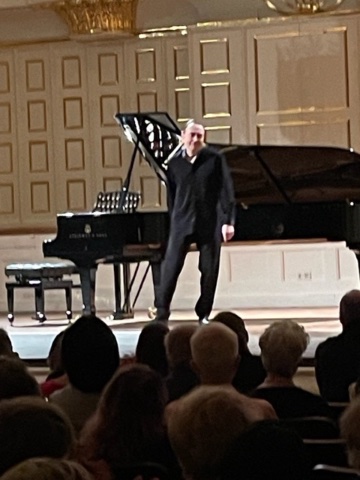 Pierre-Laurent Aimard chose as difficult a program as you could imagine. In the Grand Hall of the Mozartareum in Salzburg, the first half of his program focused on Bela Bartok’s small pieces done in grand style: Bagatelles, Etudes, and some Mikrokosmos. Ligeti followed the interval.

Bartok’s music has been called a two-toned stone hammer on a red hot horseshoe. Bartok is clearly exploring the percussive aspects of the piano. Aimard is dry and crisp as a percussionist must be. Yet luscious tones are also produced.

In the second half, Aimard undertook Ligeti’s Études, among the most important and difficult works of the 20th century.

Aimard’s style is no-nonsense. Yet he is able to bring forth the emotional and evocative power of the works. The virtuosity demanded never seems to press Airmard beyond his limits. Nothing about his posture, or his presentation is challenged.

When he composed, Bartok preferred to try new ways and not rely on theories. The freshness of this approach was reflected in Aimard’s performance.

Barotk was a great virtuosic performer. In recordings, the composer's delicate touch in quiet passages, his ability to power up a bass line without overpowering the work, and the precise balance he brings to thick harmonic passages are captured by Aimard in this performance.

Bartok Bagatelles started the program. They are flexible, offering different rhythmic styles and yet held together as a musical line. The odd pairing of an accented short note with a longer unaccented note displays Aimard as Bartok.

Bartok designed Bagatelles devoid of all the necessary flourishes that romantic composers used. Music is pared down to its simplest form, deliberately using only the most restricted technical means.

One of the most radical early departures from the harmonic use of the triad occurs in Bagatelle No. 8. Aimard shows us the closing phrases melodically and harmonically going through every imaginable transposition. An incredible feat.

The Bagatelles require a casual lightness of touch that is difficult to achieve. Aimard does not give the impression that he is working as hard as he is to achieve the effect. The pieces feel improvised.  Rules do not seem to apply.

Bartok may have been a romantic about folk music. Yet he found in listening to it a freedom of pitch which he would use in his compositions.  He also discovered rhythmic variety. Aimard brings spontaneity to novel rhythmic combinations and possibilities.

Throughout the evening, Aimard will produce more varieties of tone than any physicist thinks possible His consummate technique helps achieve subtlety. He can hold a note, give it its full due and yet keep it separate from the next note.

The three Études, were perfect. Bartok warned that these Études would frighten an unprepared public. We are still not prepared today.  As Aimard captures that feeling that all is new, all is unexpected.  The collection of pitches and ever-expanding intervals are fundamental.

In Mikrokosmos, Bartok offers a series of piano pieces which deal not only with the rhythmic, but also with melodic, harmonic and pianistic problems. Their order is pell mell. Notation gives articulation terms note by note.

No composer has a wider range of notation: for percussive alone we have staccato, staccatissimo, non-legato and legatissimo  Non-percussive trms include tenuto, dotted-tenuto, half-tenuto, portato, expressivo and dolce. And many more. This is only worth noting because part of the pleasure of listening to this performance is hearing all these subtle differences in attack. Bartok would later stop obsessively writing directions to performers, sensing that they would make their own choices. Yet Aimard’s are intuitively Bartok’s.

Ligeti’s Études form the second part of the program. Ligeti enjoyed testing performers’ techniques to the limit and sometimes beyond. Aimard is getting braver and braver.

The influences shaping these pieces are those that permeate all of Ligeti's later work, after it changed direction – from the polyrhythmic player-piano studies of Conlon Nancarrow to the music of sub-Saharan Africa, chaos theory to the minimalism of Steve Reich. In the Études, AImard enters the Ligeti pianistic vocabulary, while capturing the composer’s exuberant response to the piano’s sounding board. The music sometimes vanishes in the highest reaches of the keyboard, or growls in its lowest depths.

Aimard leaves no doubt of the music’s dazzling originality and enduring importance in his own special approach.